To borrow from the news story we wrote about this cigar, it was announced in 2012 and after a few delays, the God of Fire Aniversario has finally arrived in stores.

As noted in that story, the cigar was originally slated to be released in 2013—despite the bands reading 2012—but then became a 2014 release, a change that resulted in the cigar being declared as the 10th anniversary of the God of Fire brand, which occurred in 2014 as the first God of Fire cigars were introduced in November 2004.

The Prometheus brand, however, goes back to 1992 when Keith K. Park launched the line of premium lighters as part of his father’s company, KGM Vector. In 1997, the offshoot became an independent company that was selling lighters as well as high-end humidors and ashtrays, and in 1999 formed a relationship with Arturo Fuente that manifested as a limited edition Fuente Fuente OpusX humidor.

It wouldn’t be until 2003 that the idea of a God of Fire cigar line would come to fruition, as a meeting in the Dominican Republic between Park and Carlito Fuente would become the launch pad for the cigars that would debut the following year. The previous year, Park had produced the documentary The Fuente Family: An American Dream, and it came to Carlito’s attention that Park was nicknamed “God of Fire” as an extension of his Prometheus line, which gets its name from the Greek god who stole fire from Zeus and gave it to humans. It is the image of “Prometheus Bound” that graces the company’s products, a representation of the thief’s punishment; bound to a rock and attacked by an eagle. 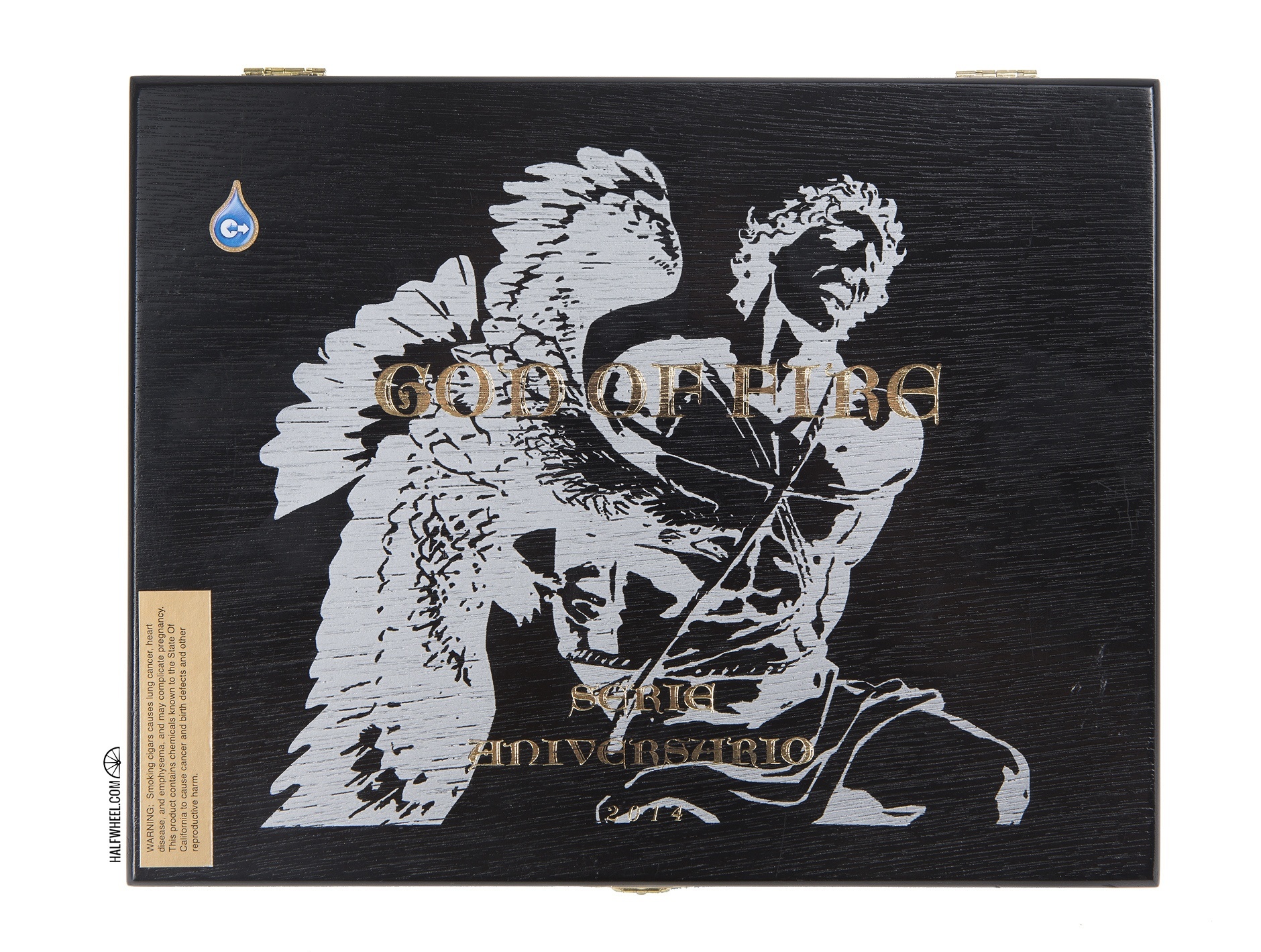 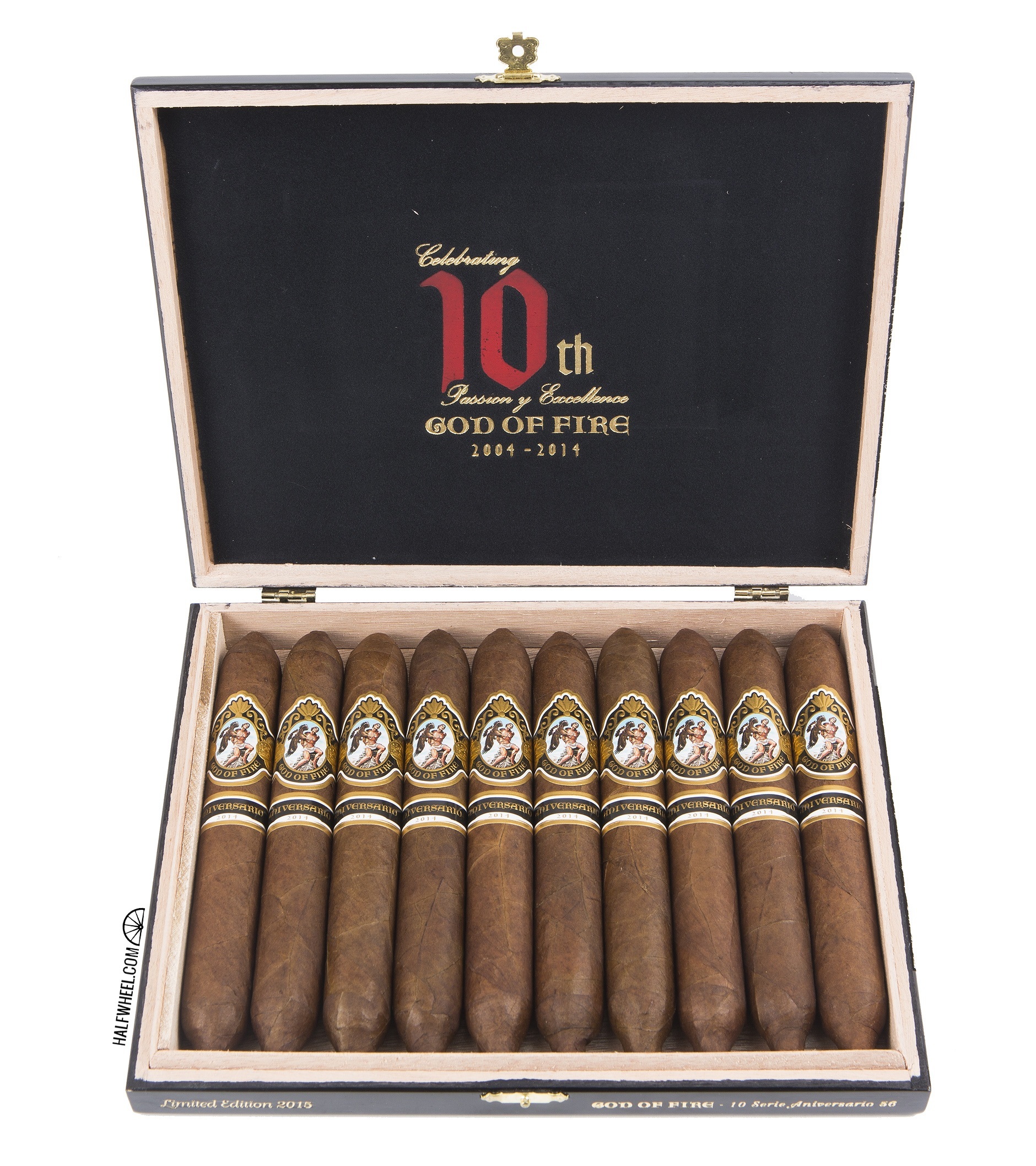 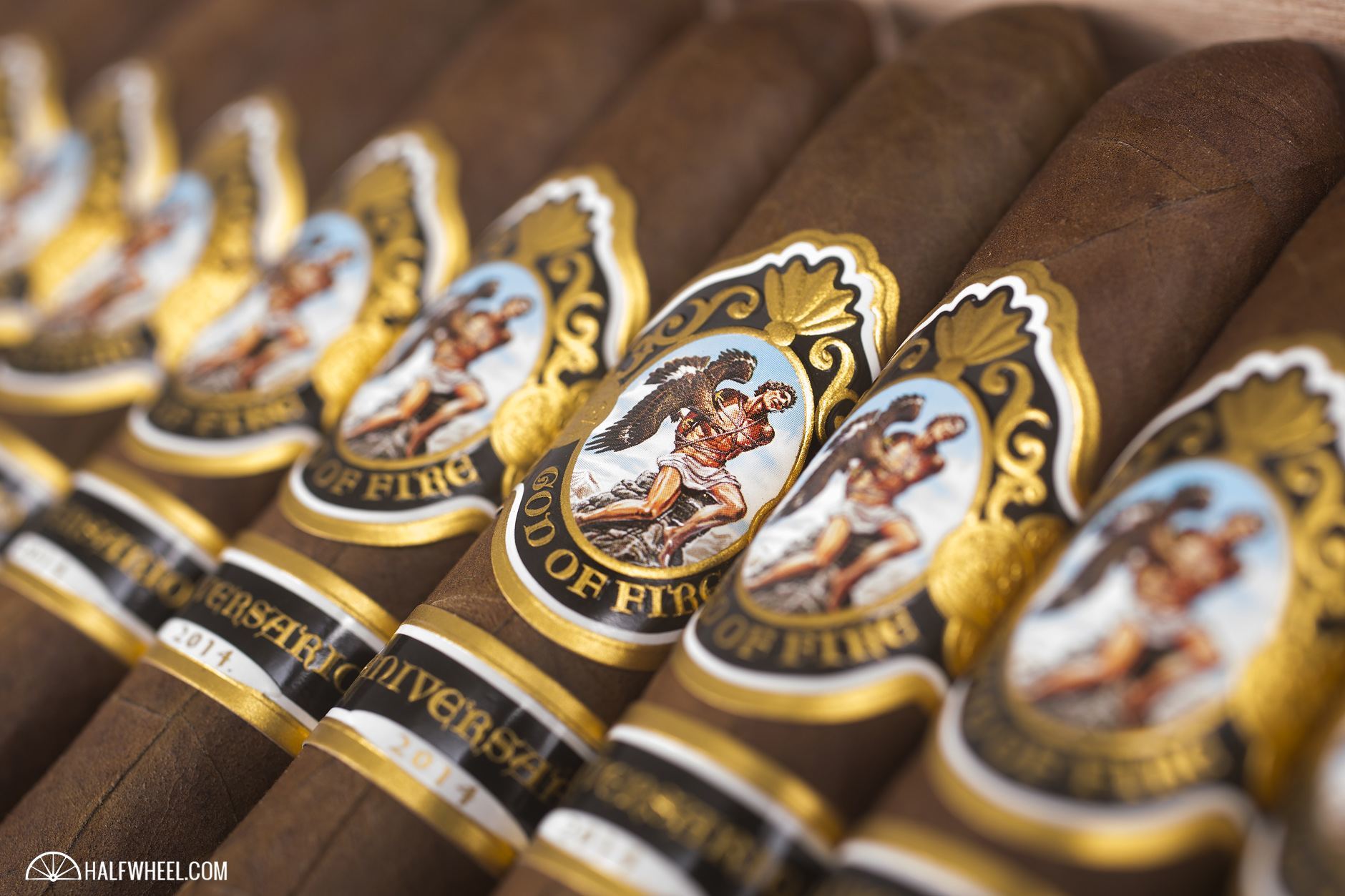 The line became well known for its two main releases: God of Fire by Don Carlos and God of Fire by Carlito.; the former uses an Ecuadoran Sumatra wrapper while the latter uses a Cameroon leaf. In 2011 the company launched God of Fire Serie B, a line comprised of four cigars, two using an Ecuadorian sun grown wrapper and two using a Connecticut broadleaf maduro.

For the Aniversario release, the blend uses an Ecuadorian wrapper with Dominican binder and filler, and is being released in three figurado vitolas. 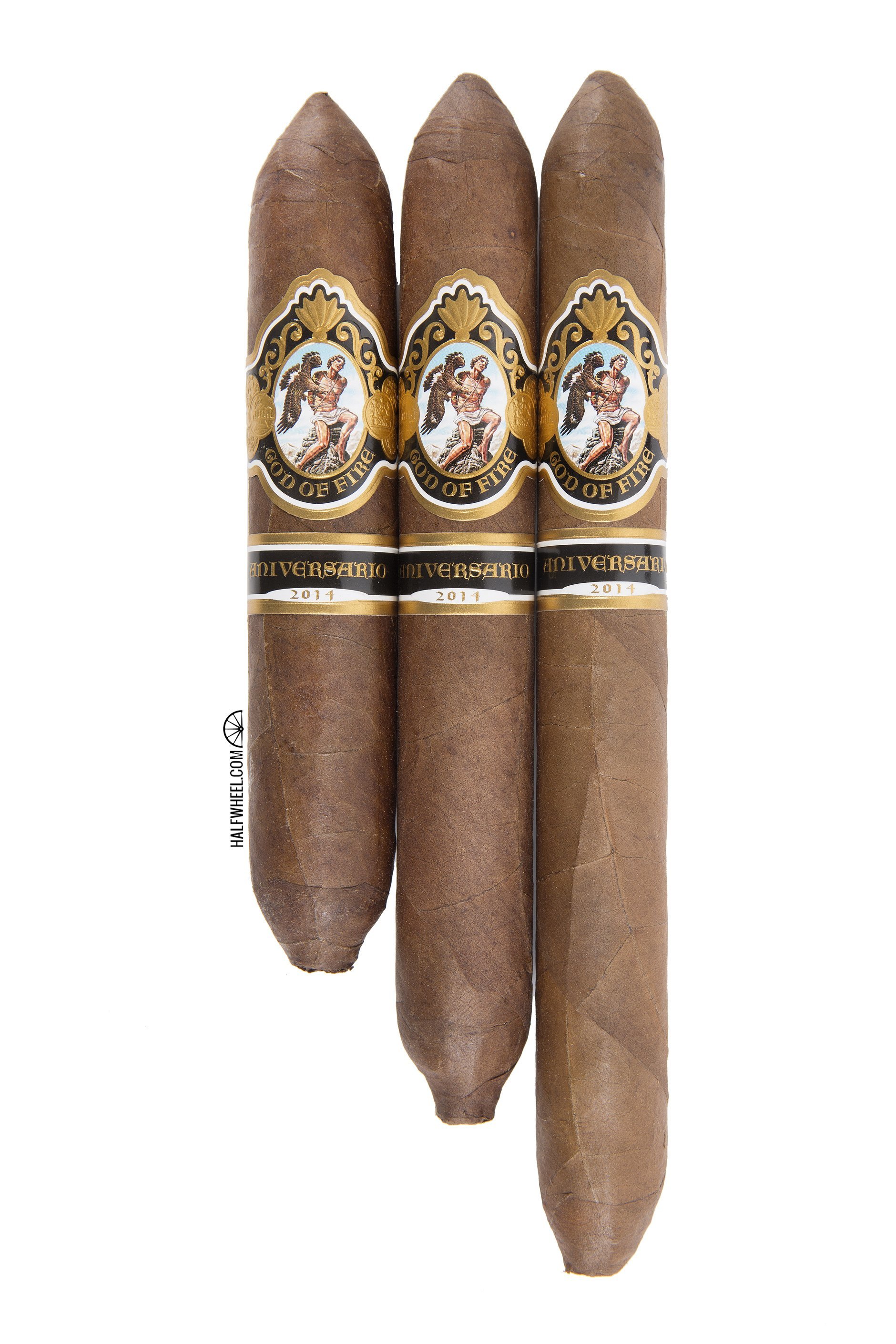 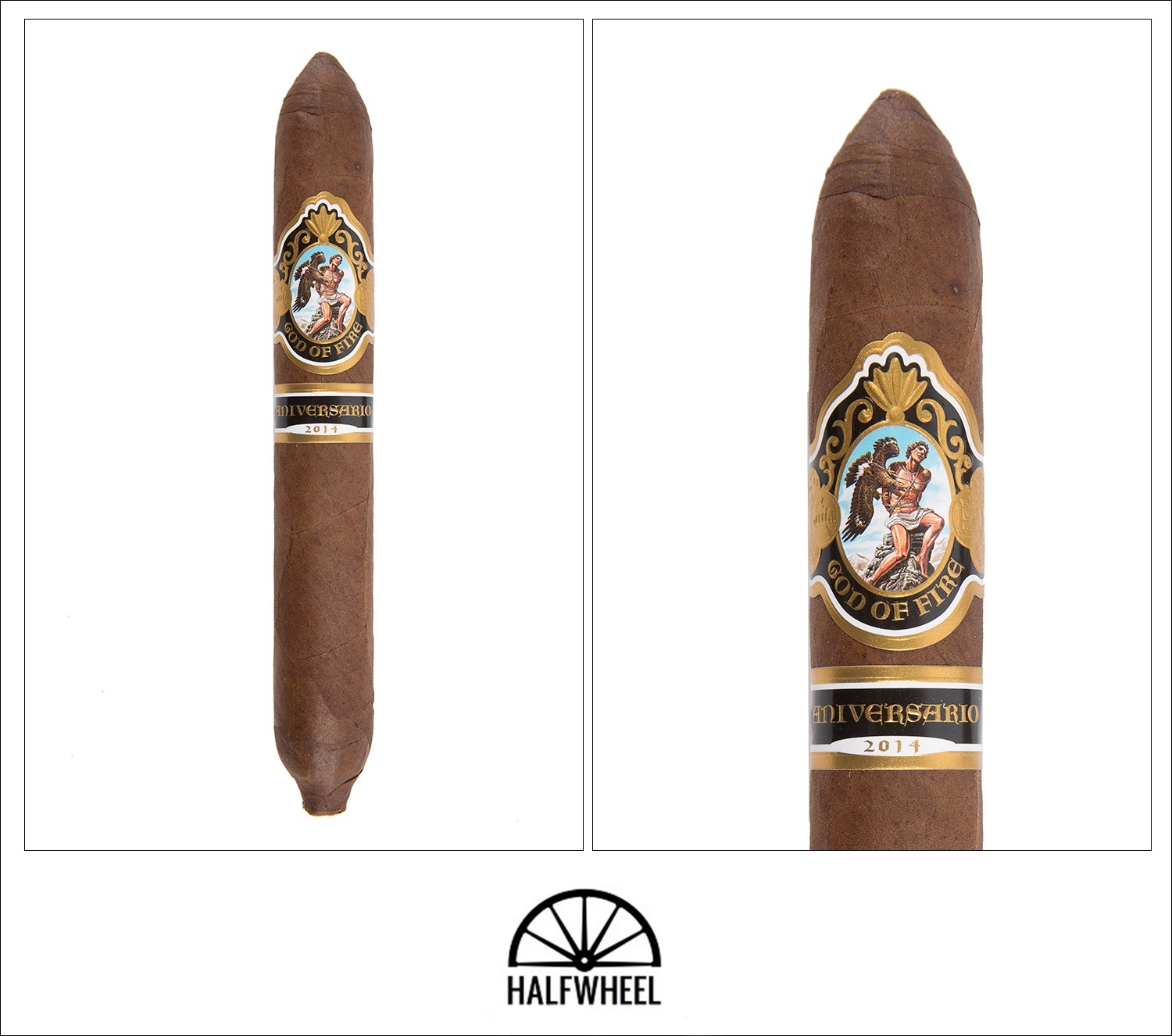 The God of Fire Aniversario is an impressive cigar on so many levels that I’m not sure which one stands out most. First and foremost, it’s an imposing size of a cigar, as even with the prevalence of 60 ring gauge sticks, a 56 still stands out to me as being bigger than the norm. Add on a nipple foot and short belicoso head and the cigar has a unique shape that is both visually appealing and shows a craftsman’s touch. Layer on a pair of gold-trimmed bands with one of my favorite images to be found on a cigar band and you have a near-perfect visual winner. The wrapper is a very familiar shade of brown, darker than medium but still very much brown, with a couple of fairly prominent veins on each sample smoked. It’s a firm and seemingly well constructed cigar, though it does feature a slight bit of excess goma around the bands that give the cigar one of its shiny spots; the others come from where ever the fingers of the band applier may have touched. The wrapper offers a bit of cocoa powder sweetness, while the very small opening in the foot of the wrapper doesn’t provide much of the filler from which to get an adequate whiff. Trying to clip as little of the cap off as possible, I’m left with a bit of a tight draw but still manage to get a sweet and smoky flavor that has a touch of tanginess to it with pepper a latecomer to the palate after a few draws.

The small foot limits just how much draw and smoke one is able to get from the God of Fire Aniversario 56, but once the flavor rounds the foot and hits the full ring gauge of the cigar, smoke billows off the cigar in abundance. While there is a bit of pepper in the mix early, it’s very restrained in the opening puffs, instead presenting a much lighter and subtly sweet flavor, almost like that of marshmallows. When the cigar opens up a bit of mint comes along with it for a few puffs, before the smoke warms up a bit, pushing the mint out in favor of a heartier flavor, bringing in leather, a bit of medium roast coffee and just a touch of earthy terroir. After a brief rest the mint comes back and rejoins the party, making for the cigar’s most complex point without hardly a doubt, and in some ways it almost feels just a bit too complex, though I’m not complaining. The nose shows a more chalk-forward profile with subtle amounts of white pepper in the background that don’t stand out all that well. While the burn line hasn’t been perfectly even since I didn’t feel the need to touch it up any, the cigar has burned beautifully with plenty of smoke and no draw or combustion issues. 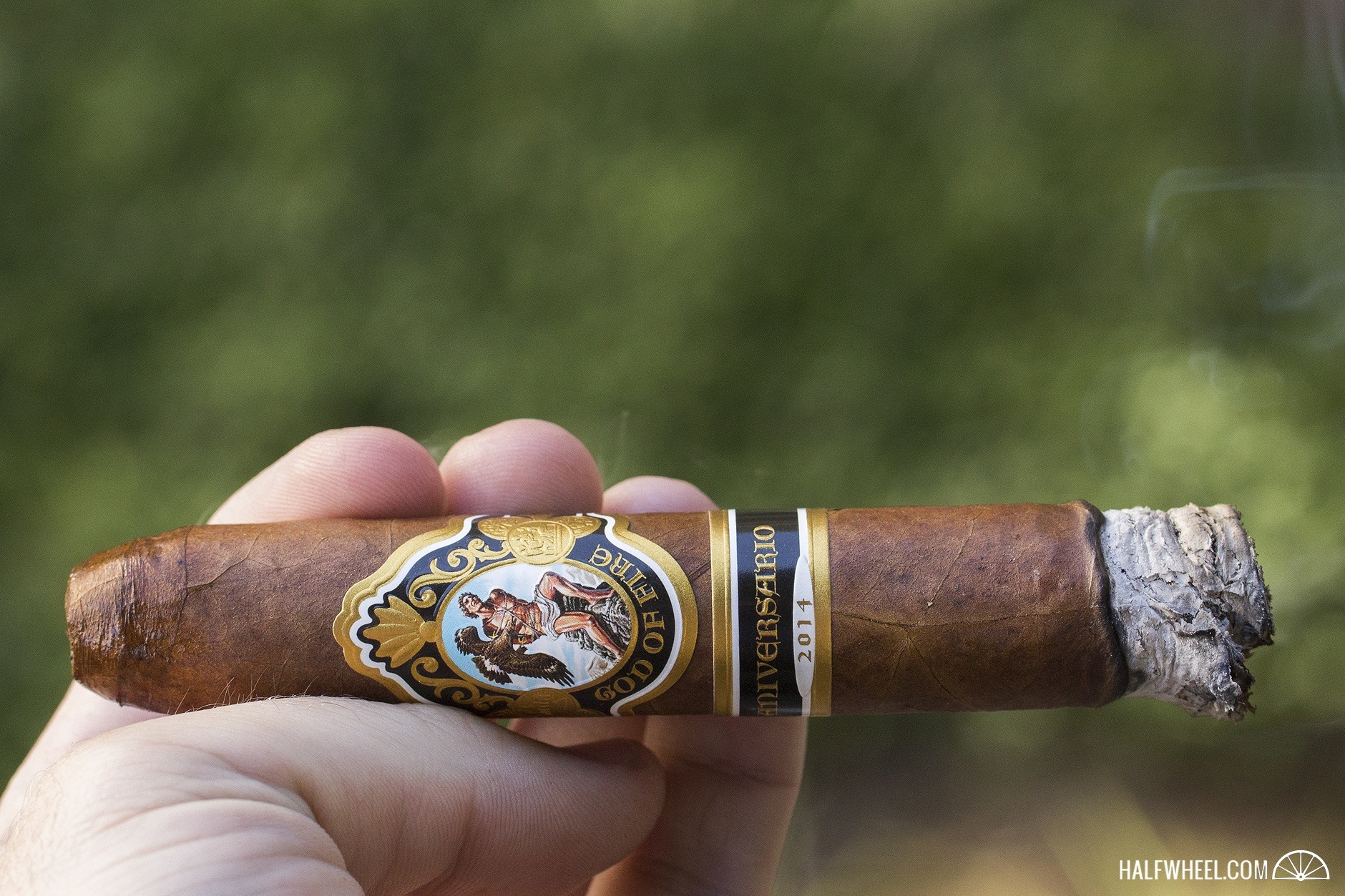 The most significant sign that the God of Fire Aniversario 56 is transitioning to its second third is a bit of green grape sweetness in the aroma; it’s not as damp and sweet as what you might find at your local produce stand or grocery store, but the underlying note is the same. It’s not until the midpoint that the cigar makes its next move, picking up a slightly dry undertone of matchsticks before beginning a journey into a medium level robustness; it’s not heavy and gruff in the vein of what you’d expect from Nicaraguan tobacco, but it certainly shifts gears into something more aggressive and throaty than where it started. After a brief lull earlier in the second third, pepper returns to the forefront of the flavor and aroma; the latter gets a clean black pepper while the former has more of a mix of white and black. 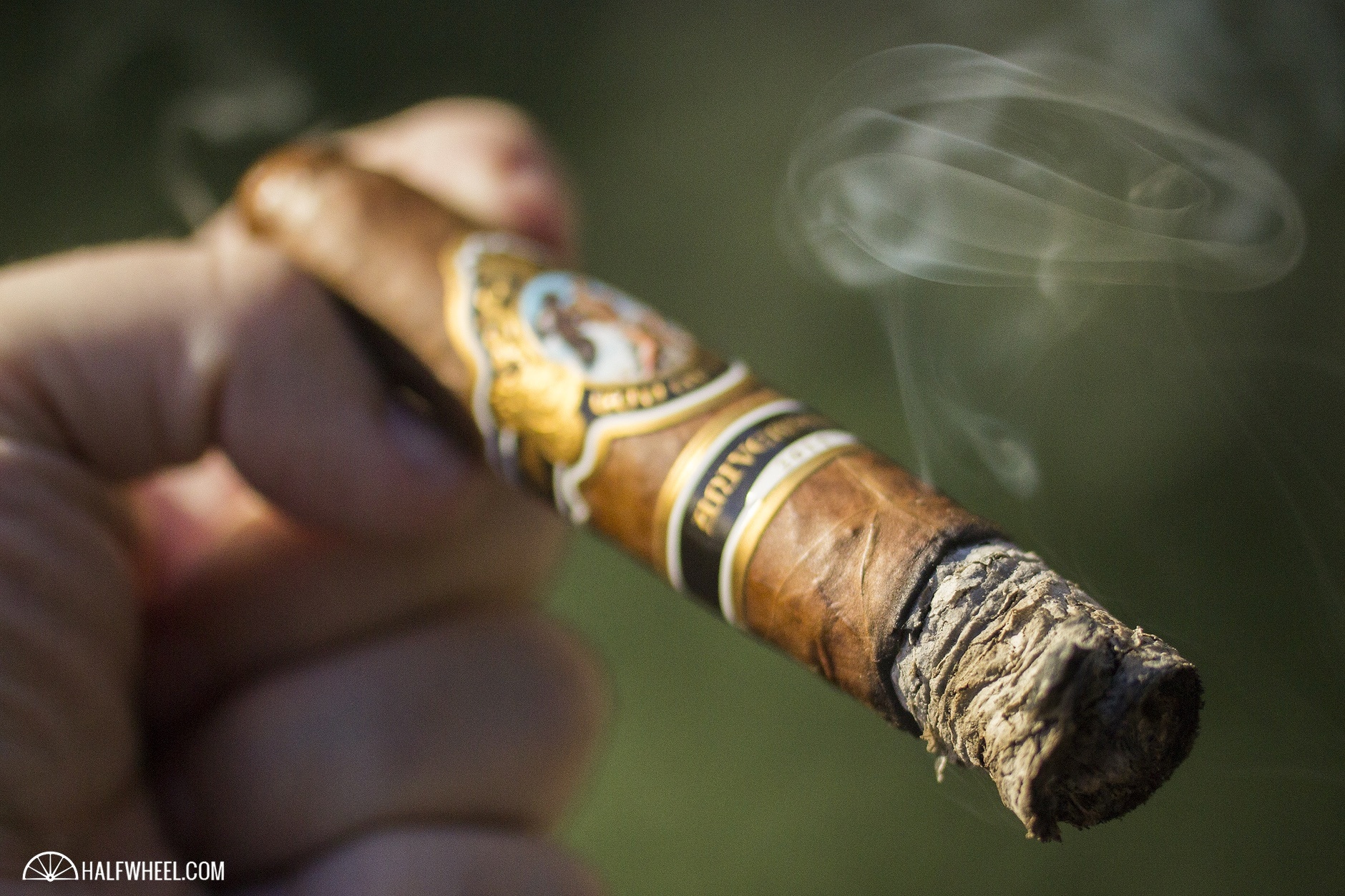 As I find to be the case with a number of cigars, the final third of the God of Fire Aniversario 56 brings about a distilling of the core flavors presented up to this point, strengthening the flavor and intensity for the final inches. The pepper is tighter and punchier, the wood is more prominent, and thankfully the cigar is doing a commendable job staying balanced amidst all of this. Each puff within the last two inches delivers a simultaneous stimulation to both palate and nose, and there’s a good bit of lingering tingle to make sure it’s not forgotten about while resting. The few touches of sweetness that I’ve found prior are fleeting by the point, but they do manage to make an appearance primarily in the aroma of the cigar, an enjoyable complement to a flavor that is pointed in a decided direction. My only real complaint about the cigar is that combustion becomes a bit of an issue in the final third; a bit slower rate of puffing on the cigar probably doesn’t help the situation, but it seems that the tobacco has just a bit more of a propensity to go out than it did earlier. Otherwise it is a flavorful finish for what has been a very enjoyable cigar. 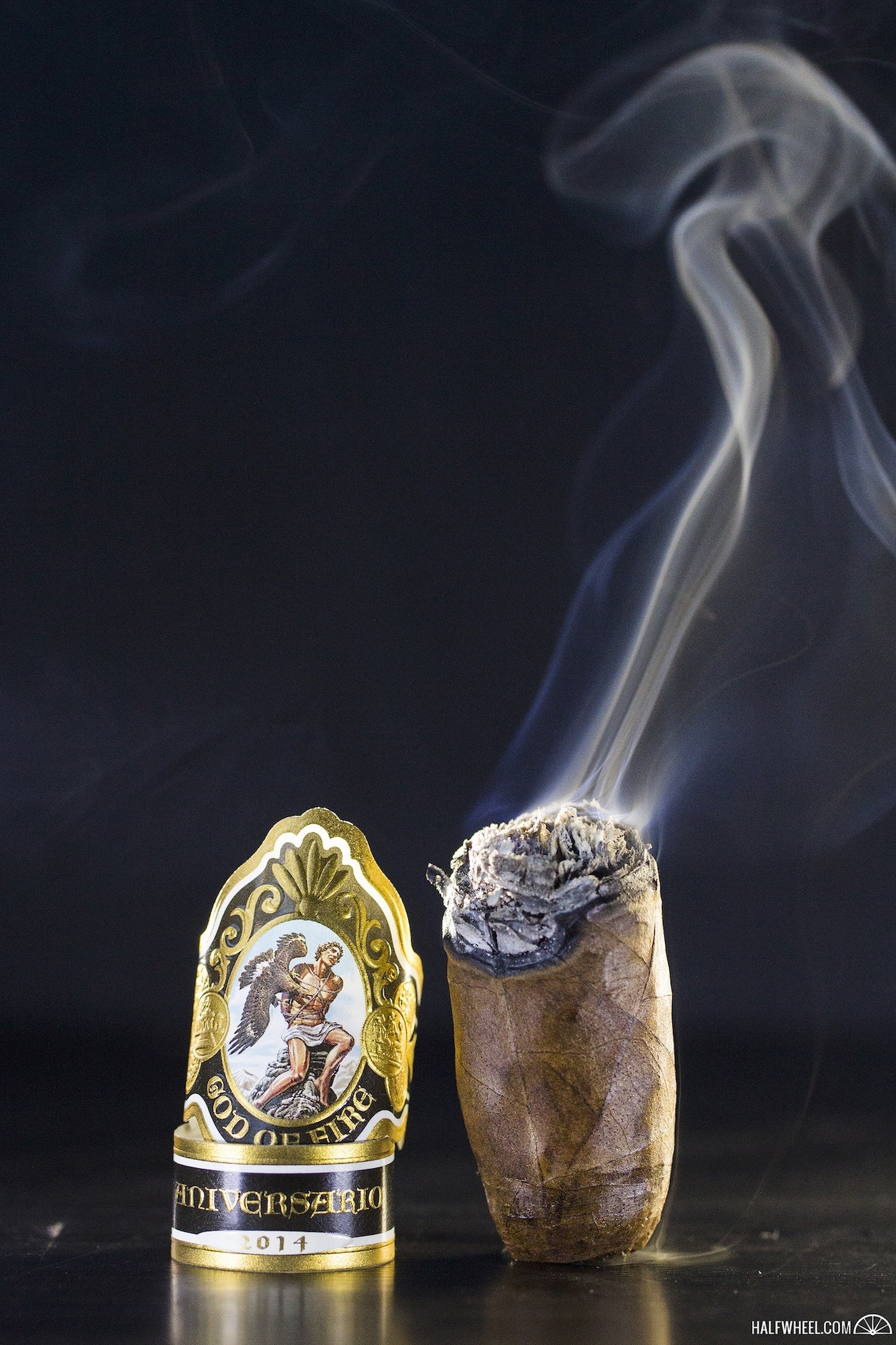 It has been quite some time since I last smoked any of the God of Fire releases, and this blend is a near perfect reintroduction to the line. The balance of strength and flavor is spot on for the entire cigar, and while it tips towards strength in the final third, it never gets too far over the line to be enjoyable. Construction is fantastic, the flavors are bright, vibrant and pure, never trying to do too much other than to show the best they can offer. While I didn’t end up with a long list of flavors, I did find myself consistently savoring each puff of the cigar and looking forward to smoking each successive sample. This is simply a fantastic release and one that I will most likely be looking to pick up a few more of to add to my humidor.