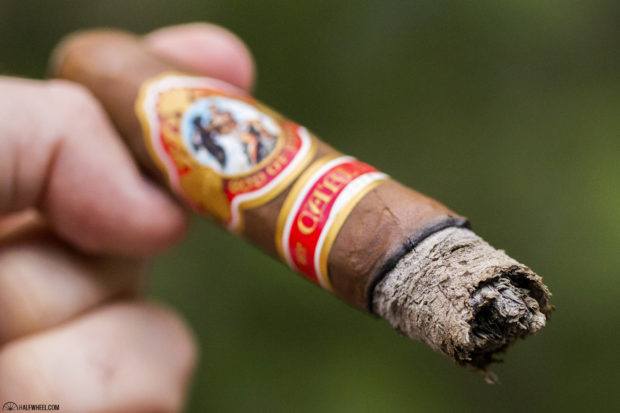 God of Fire by Carlito Diademas 56

Both of the cigars are 5 3/4 x 56 figurados, come in 10-count boxes and are priced at $26 per cigar. Where they differ is the blend and design; the God of Fire by Carlito 56 comes with a red ribbon foot band and predominantly red secondary band, while using a Cameroon wrapper over Dominican binder and filler. The God of Fire Serie B 56 uses a Connecticut broadleaf wrapper over Dominican binder and filler and gets a golden yellow foot band and black and gold secondary band.

Also, the secondary band of the God of Fire by Carlito Diademas 56 bears the year 2014, a reference to when the cigar was made. 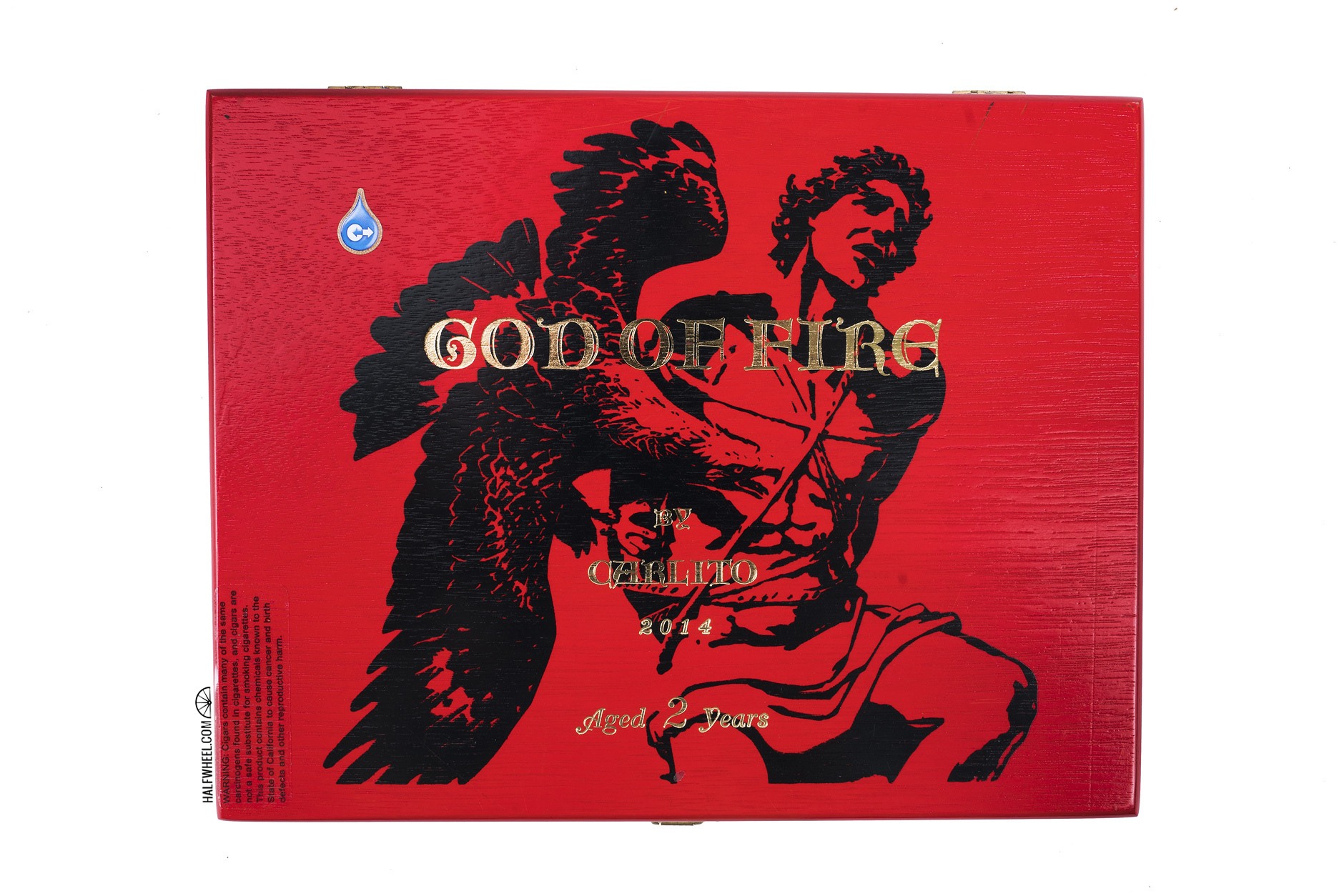 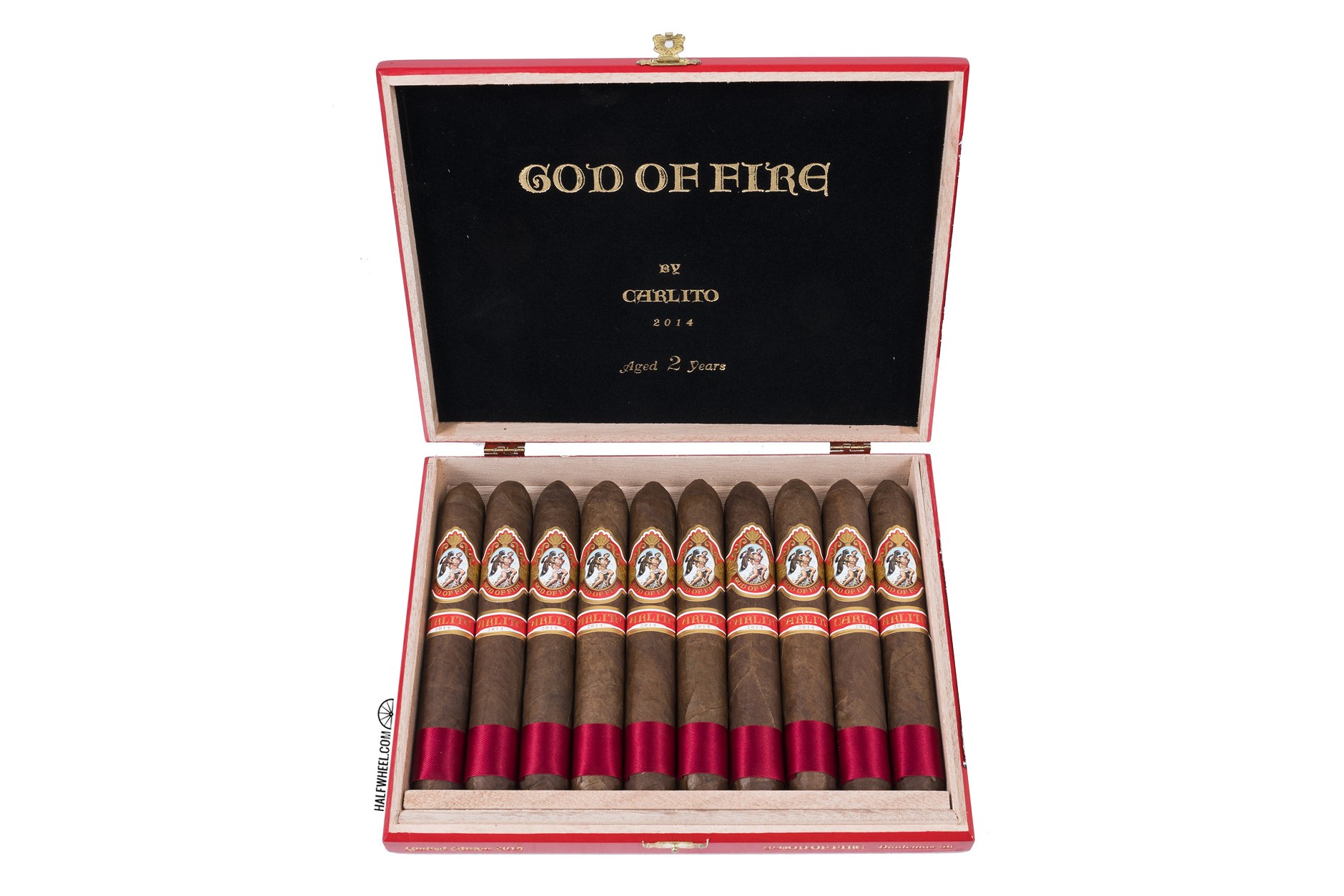 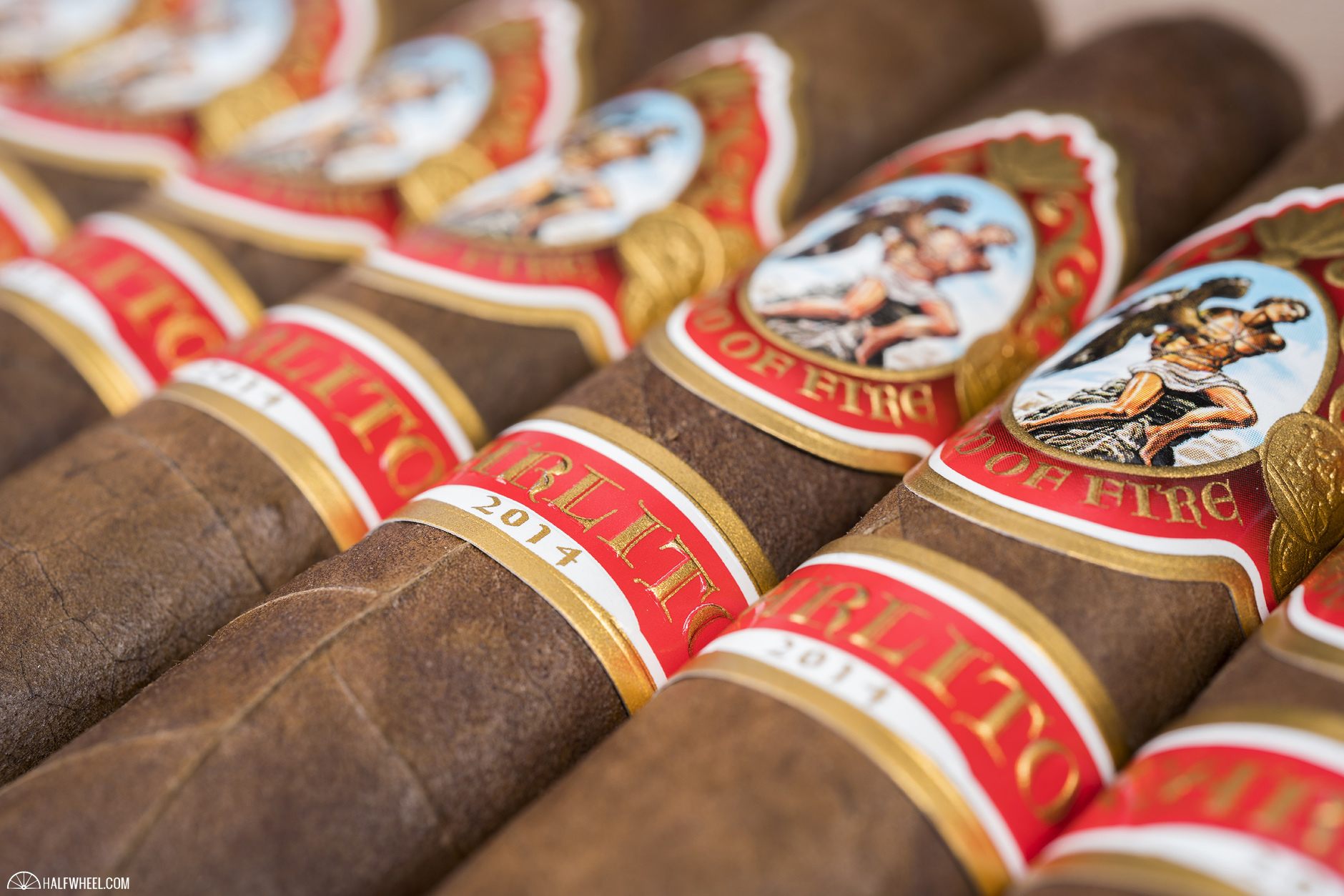 If you’re not familiar with Prometheus, it’s a company launched in 1992 by Keith K. Park, though he started with premium lighters as part of his father’s company, KGM Vector. He went independent in 1997, building his portfolio with high-end humidors and ashtrays, and in 1999 began a relationship with the Arturo Fuente Cigar Co. that resulted in a limited edition Fuente Fuente OpusX humidor.

From there, the relationship continued to grow, and in 2003 the idea of a God of Fire cigar line would come to fruition. A meeting between Park and Carlito Fuente in the Dominican Republic would become the launch pad for the cigars that would debut the following year. The previous year, Park had produced the documentary The Fuente Family: An American Dream, and it came to Carlito’s attention that Park was nicknamed “God of Fire” as an extension of his Prometheus line, which gets its name from the Greek god who stole fire from Zeus and gave it to humans. It is the image of “Prometheus Bound” that graces the company’s products, a representation of the thief’s punishment; bound to a rock and being attacked by an eagle.

The line became well-known due to its connection with Fuente, with Carlos Fuente Sr. and Carlos “Carlito” Fuente Jr. each blending a line, the aptly named God of Fire by Don Carlos and God of Fire by Carlito. Carlos’ version uses an Ecuadoran Sumatra wrapper while Carlito’s uses a Cameroon leaf. In 2011 the company added God of Fire Serie B, a line comprised of four cigars, two using an Ecuadorian sun grown wrapper and two using a Connecticut broadleaf maduro. 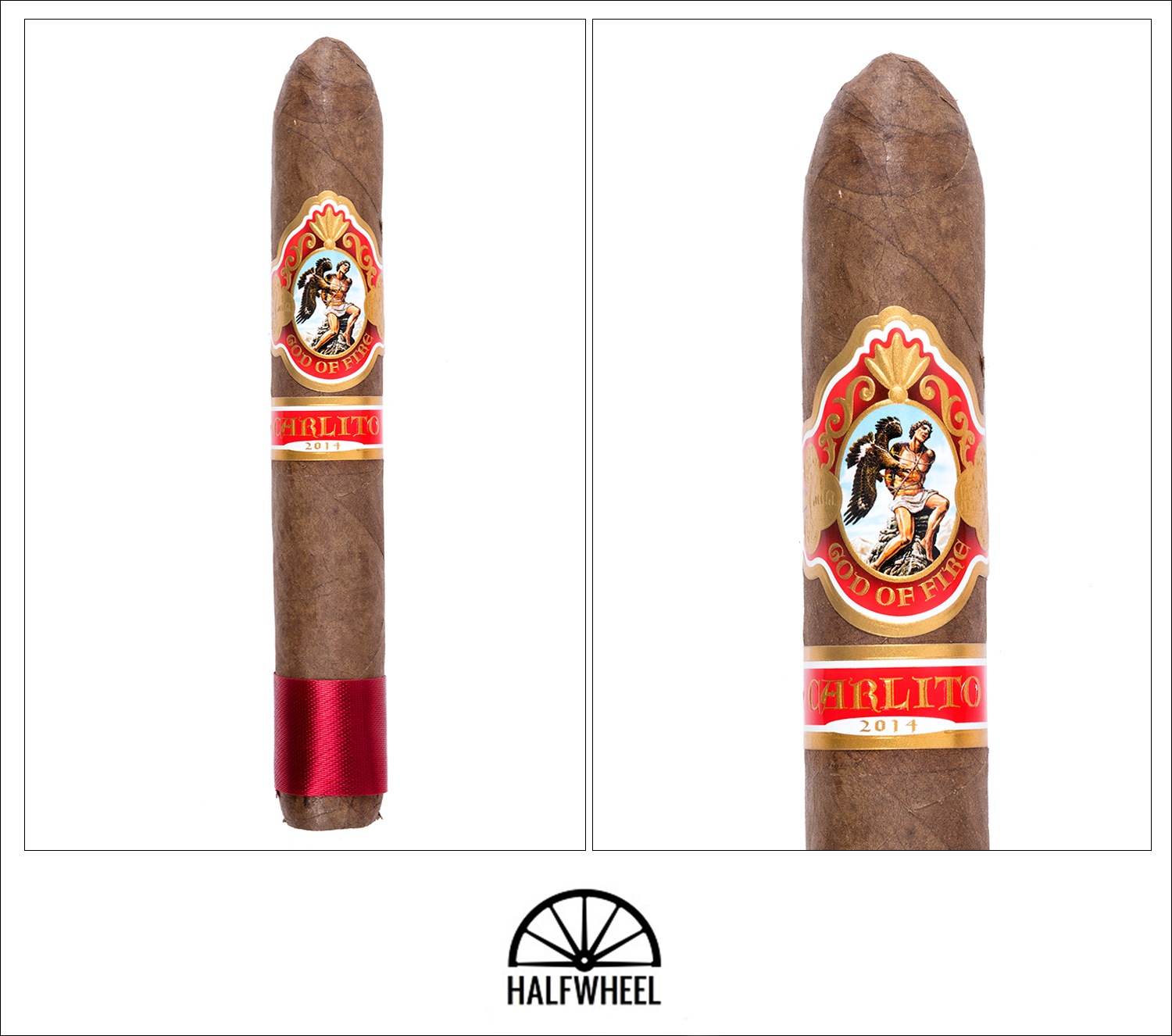 The God of Fire by Carlito Diademas 56 is a thick and firm figurado with a slightly curved foot that is abruptly chopped off and thus lacking the finishing touches to make this a more traditional perfecto vitola. The wrapper is a fairly evenly colored, medium shade of brown with some decent vein structure and just enough variance in hue to make the seams visible, including some interesting knife work at points. It’s fairly firm in its density, and while not rock hard, I’m hesitant to squeeze it too much out of respect for the wrapper. The sizable foot offers a mild pre-light aroma, with just a faint hint of pepper and baking spices along with a bit of powdered orange, though there is some reluctance to commit to any specific note given how reluctant they are to register. The cold draw is easy and shows just a touch of resistance while offering a tick more intensity and flavors of a cinnamon sugar cake donut, though pepper is lacking here.

The first puffs of the God of Fire by Carlito Diademas 56 pick up on the baking spice note while adding a bit of bottom-of-the-cup cappuccino foam, coming in at medium-minus in intensity but with some distinct flavors that I hope unpack themselves in the early going. The cigar builds up a thick, dense ash through the first third, and while I’m intrigued to see how long I can get it to remain attached, I knock the first sample’s off around the one inch mark both for purposes of setting up the next photo, and as regular readers know, I’m a bit of a nervous asher, especially with my laptop out. My hopes of the flavors unfolding remain largely on hold until the final puffs of this section, and even then the change is only slight, showing a bit more of the baking spices and some muffin or coffee cake base notes, with the overall profile good if a bit reserved. 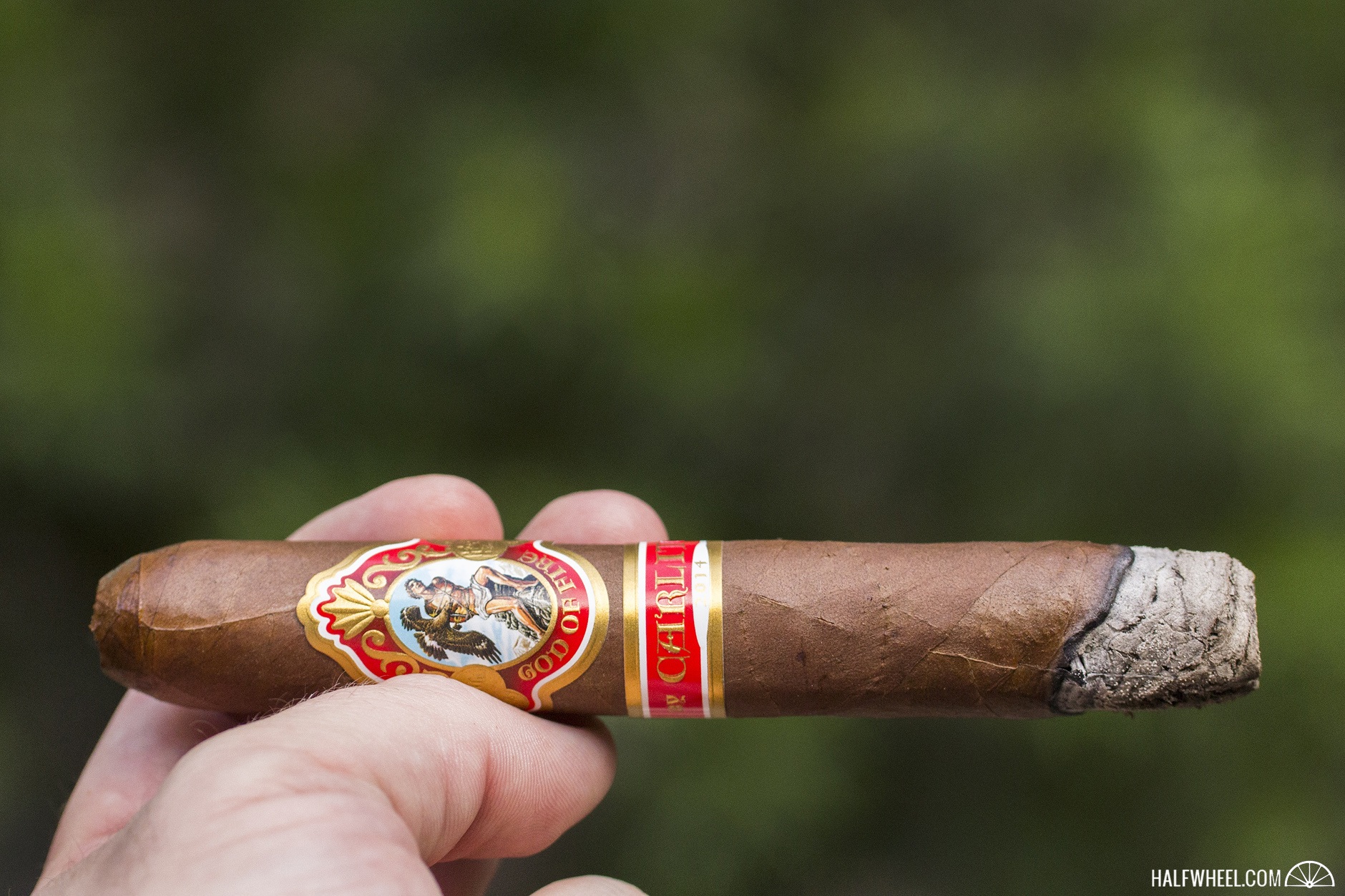 The God of Fire by Carlito Diademas 56 doesn’t change much as it makes its way into the second third, though the little bit of creamy foam I found at the onset seems to have disappeared, leaving more of the baking spice notes to do the talking. Those also amplify through the nose by a few ticks, though there isn’t much lingering being done. Given that this has a Cameroon wrapper on it, and Fuente is known for using high-grade Cameroon tobacco, I’m quite surprised that I’m not getting more of the leaf’s typical flavors. What I must say though is that the cigar is incredibly smooth and balanced, quite possibly one of the best I’ve had in recent memory. Try as I might through all three samples, I can’t find a single note of harshness or irritation. The first real appreciable amount of pepper comes out past the midway point as the burn line begins to approach the final third. It’s fairly subtle at first, though a few more puffs and the profile definitely pivots, drawing in cedar and a generic lumber, a bit of red chili pepper flakes, and for the first time a slight simple syrup sweetness that glazes the base notes. The draw also loosens up here just a touch, and as such there’s a bit more smoke production from the cigar. 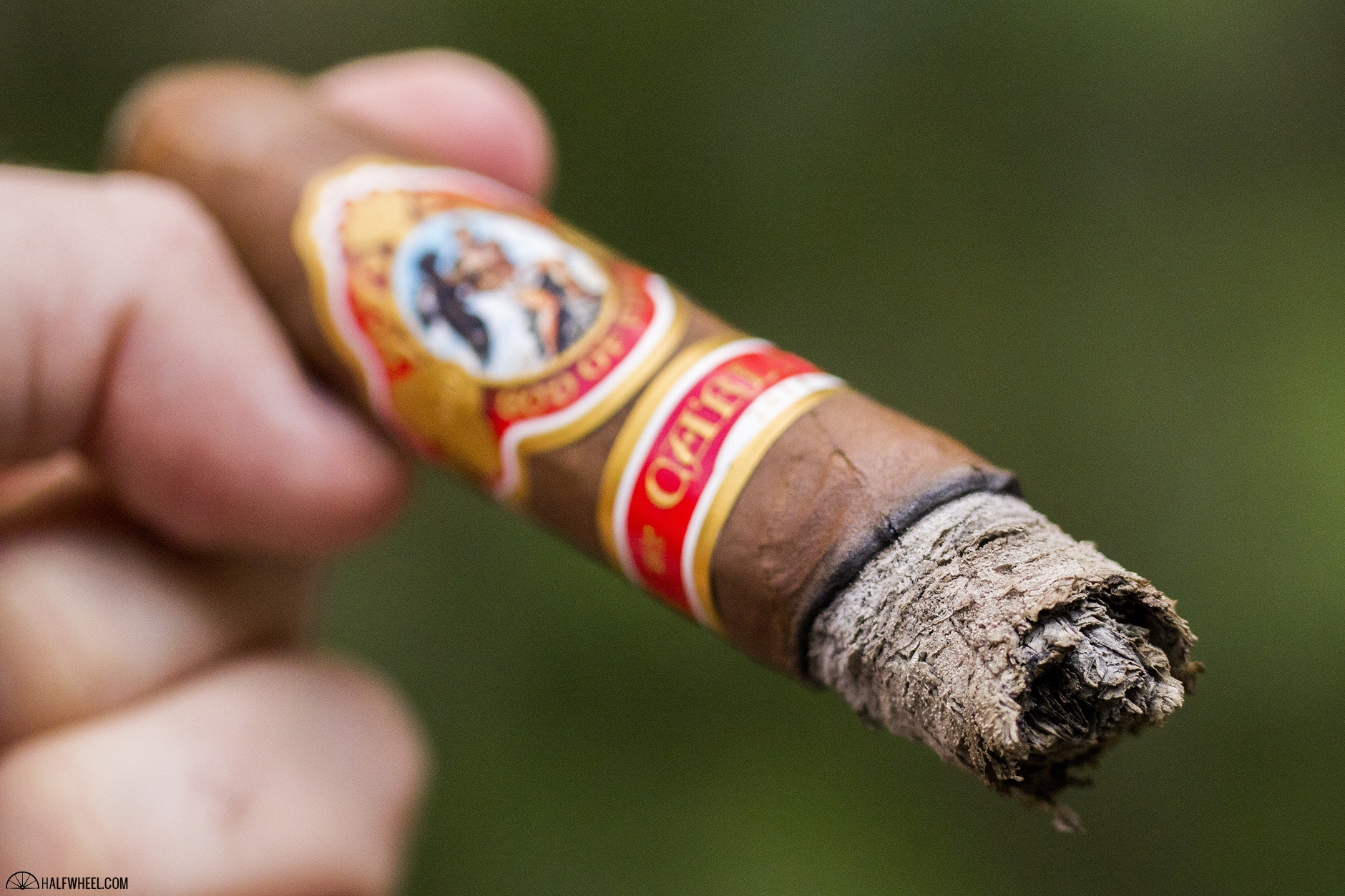 The final third carries on much of the newly developed flavors from the end of the second third, though the red chili pepper flakes begin to make themselves more known with each puff, and one sample wants to dabble more in cedar than the other two. While the cigar up to this point hasn’t generated much physical sensation on the tongue, there’s a touch more happening now as the sides of my tongue feel the cedar, while the whole tongue seems to be treated to the red chili pepper. There’s not much in the way of sweetness to be found, which I find a bit disappointing but not inherently negative in the cigar’s profile. The final inch and a half sees the body thicken up a tick, the flavor seems to concentrate and is at its fullest level, and what physical sensation the cigar elicits is also at its most impactful and lingering. The cigar comes to a close a bit more pointed due to some increased heat but manages to maintain its balance, though I do find myself reaching for some water to relieve the tingle. 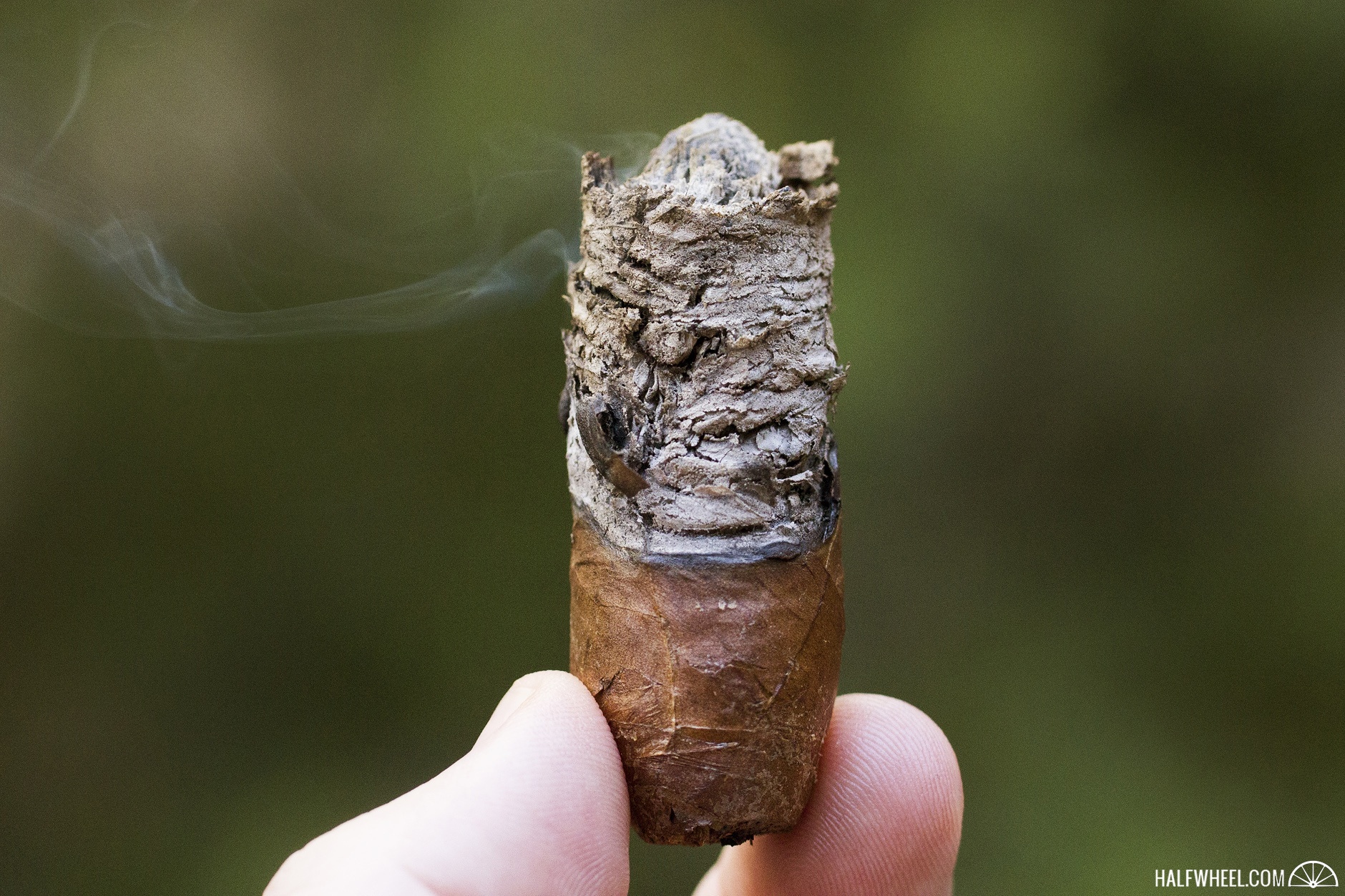 If there are two words to describe the God of Fire by Carlito Diademas 56, they are smooth and balanced, so much so that it almost caught me off guard because the cigar itself doesn't jump out with tons of pepper, flavor transitions, and I'm hesitant to even say, complexity. Yet the trade-off is certainly worth it as the cigar never takes a puff off, offering the opportunity to enjoy the subtlety and smoothness of the first two thirds before perking up in the final third to show some more dynamic flavors and strength. While it's still a bit short of the God of Fire Aniversario Aniversario 56 in my opinion, the God of Fire by Carlito Diademas 56 is a cigar worth considering when you've got the time and attention with which to enjoy it.