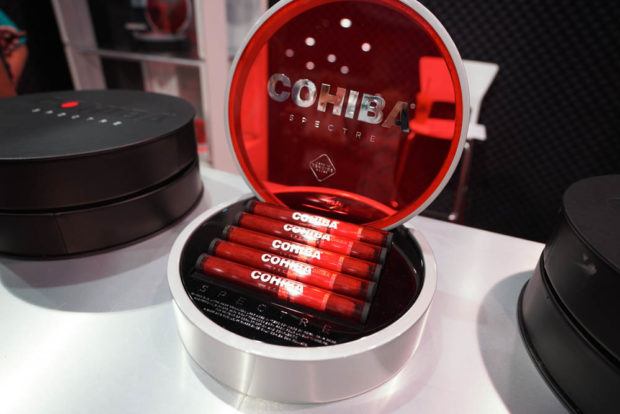 Today, General Cigar Co. will begin shipping its most expensive cigar to date.

The Cohiba Spectre has an edgy name, flashy packaging, barrel-aged tobacco and an interesting story; but it will largely be known for one thing: its price.

At $90 per cigar, this is most expensive from General Cigar Co. as well as one of the most expensive cigars on the market today. As for the specifics, it’s a 7 1/4 x 54 Churchill Extra with a blend of vintage tobaccos.

The oldest tobacco is found in the center: a Dominican piloto cubano leaf aged in tercios since it was harvested in 1995. Tercios are a way of aging tobacco by using the leaves of a royal palm tree. Surrounding it are a variety of leaves grown in Estelí, Nicaragua from 2011-2014. Those tobaccos were aged in barrels that previously held sherry from Spain. In addition, three Honduran leaves round out the filler: Olancho San Agustin (2002), the Jamastran Valley and La Entrada (2011).

As for the wrapper, it’s an Ecuadorian Sumatra varietal that General said was picked from upper primings of the plant and were then aged in barrels. In the end, General had just eight barrels.

General opted to have a single buncher, Ruben Dario Perez Peña, and a single roller, Xirolma Céspedes, produce each cigar. The company says the pair has nearly 50 years of experience combined between them.

Originally, General said just 180 boxes of 10 were produced, though due to strong demand, the company opted to make more.