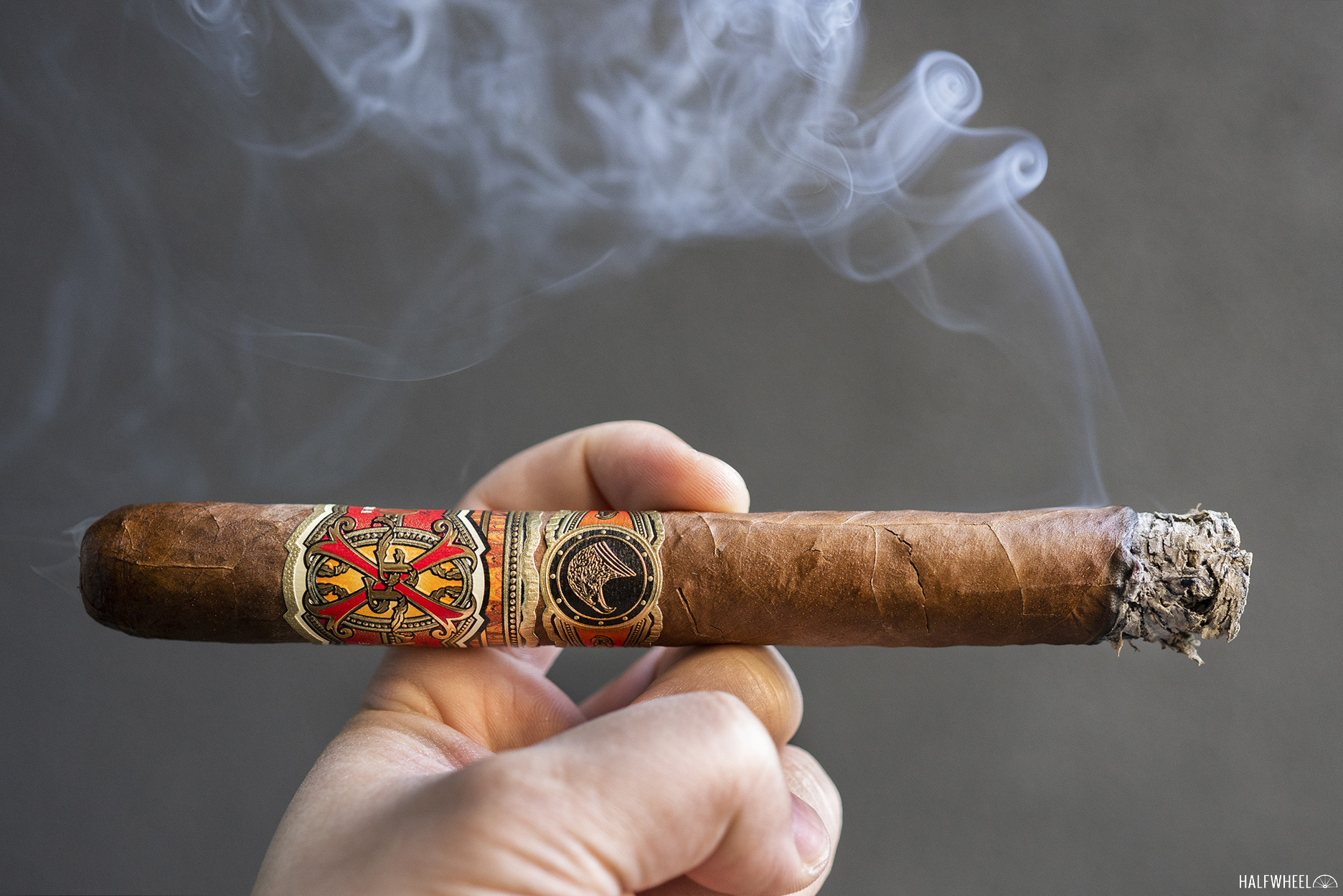 I remember reading a story a couple of years ago about Stefano Ricci, the eponymous Italian clothing house and its founder.

The New York Times profile started in about as a ridiculous manner as any story:

I should point out, the title was Stefano Ricci, Clothier to the 0.001 Percent.

At no point did I ever consider the idea that I’d ever be writing about Stefano Ricci. But a year later, I was in Dortmund, Germany for Intertabac 2018 and I saw Filippo Ricci, the company’s creative director, in the Arturo Fuente International booth.

He was there for the start of a new partnership between the brands.

Stefano Ricci is a fashion house dedicated to luxury clothing for men, but more like LUXURY clothing for men. Dress shirts start at $750, off-the-rack jackets start at $4,600 and Stefano Ricci suits regularly cost as much as a nice car. Beyond clothes, the company produces accessories like the aforementioned cufflinks, and as it turns out, cigar accessories. The company also has lounges at some of its locations where it will cater to the needs of its high-spending clients, including giving them a high-priced cigar to smoke during the buying process.

As part of its new partnership with Arturo Fuente, it now has its own cigar to give out.

It’s a 7 x 52 Churchill extra that wears the OpusX branding along with a special secondary band featuring Stefano Ricci’s eagle logo. The blend has never been disclosed, though as Carlos “Carlito” Fuente Jr. explains above, it’s not the normal OpusX blend.

At the time, there were conflicting ideas about how, or if, the cigar would be sold. Technically, the cigar has not been commercialized, meaning that the cigars are gifts given out by Stefano Ricci, the company, to clients and friends.

There are however a few more or less guaranteed ways to get some, the least expensive of which starts at $4,760. 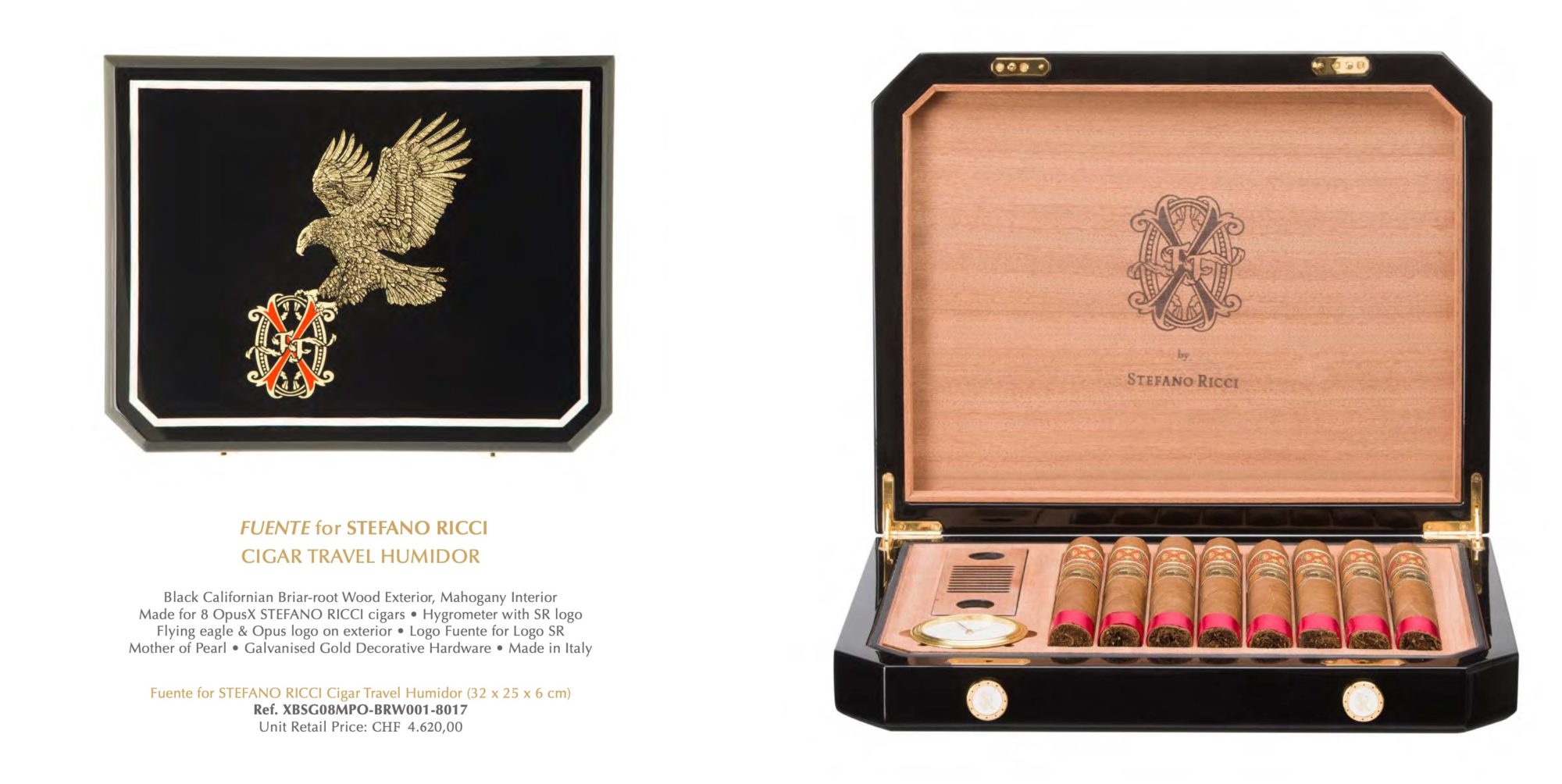 If you buy a Fuente for Stefano Ricci Travel Humidor, you are likely to be gifted eight cigars, which conveniently fit inside. The Italian-made humidors are stunning: a high gloss black lacquer with incredibly detailed mother of pearl and gold accents on the outside and a mahogany interior. In addition, each humidor comes with a humidifier and hygrometer.

That humidor itself retails for CHF 4,620 ($4,766) and there are add-ons and more expensive variations. A calfskin leather case to protect the humidor can be purchased for CHF 1,870.

There’s a variation of the humidor, albeit one without the Arturo Fuente branding, which comes in briarwood and has room for nine cigars of various lengths, including four of the 7 x 52 Churchill extras, that retails for the same CHF 4,620. That same design is also available in crocodile leather, which retails for CHF 10,450.

Finally, there are variations for seven cigars (CHF 5,060 and CHF 11,000) that use palladium and come with slots for cigar accessories, which are not included.

Of note, the shorter cigars in the pictures above are smaller versions of the Stefano Ricci blend. Rather, those are just cigars that were cut to show the different lengths.

That means there is a scenario where you could get a travel humidor, a cutter, lighter and a leather bag for your travel humidor, and probably eight cigars, for just under $16,000. That price includes CHF 385 for the calfskin leather box. 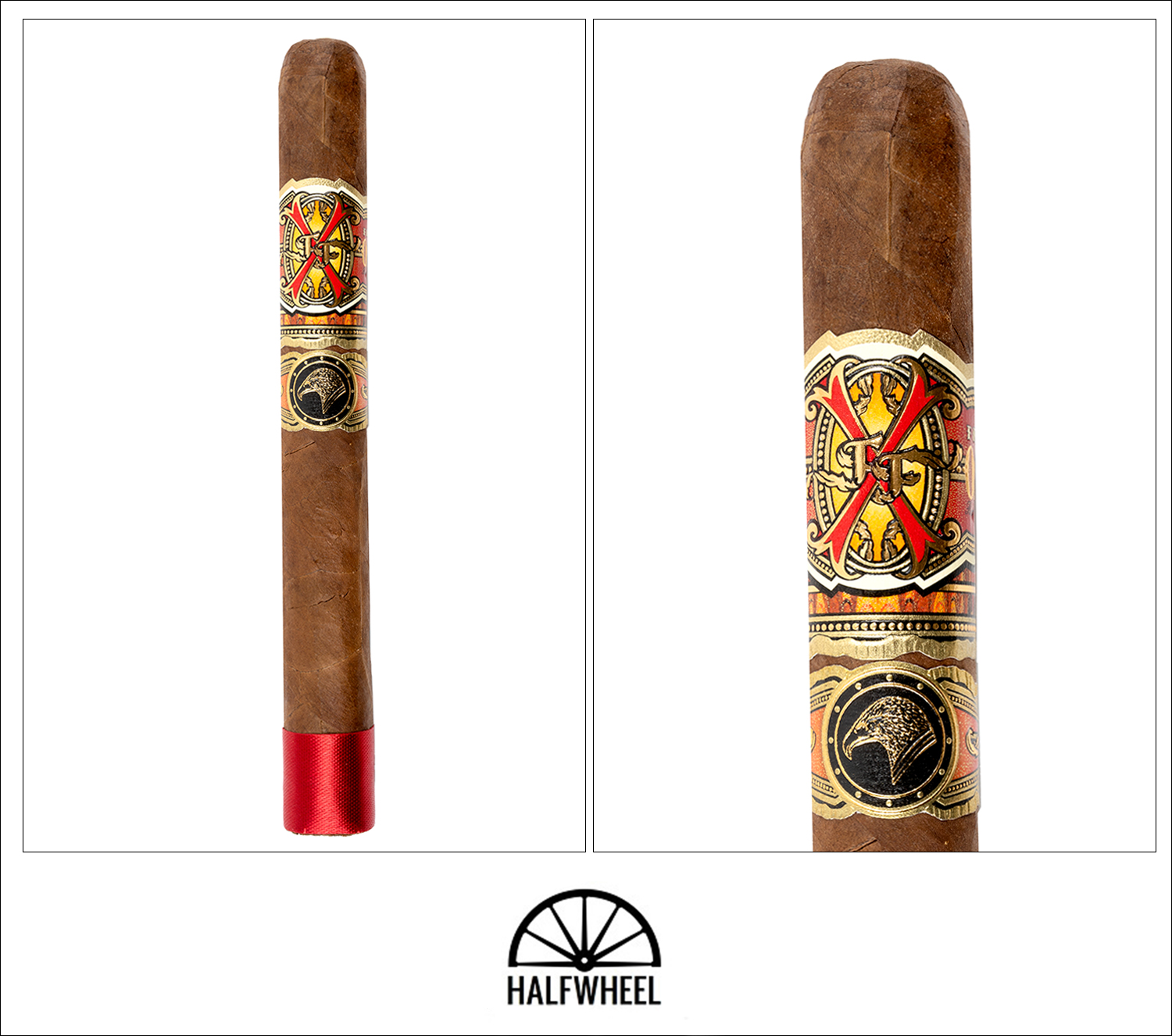 *That includes the cost of the humidor. I’m not sure how to value the humidor versus the cigars that are gifted with the humidor.

If the secondary band wasn’t there, I doubt I would notice that this isn’t one of the 14 regular OpusX sizes. To be fair, it’s not that far away from the Reserva D’Chateau size, which measures 7 x 48. The cigar has a slight box-press, something I’m not sure is intentional. It looks like an OpusX and it smells like a milder OpusX with lots of Spanish cedar, some varnish and earthiness. The foot is quite different with a distinct mushroom flavor—not the musty olor sensation that dominated Davidoffs of yesteryear—as well as a touch of floral flavors. Those floral flavors command the medium-full cold draw, joined by a bit of gingerbread cookies.

The first puffs of the Fuente Fuente OpusX Stefano Ricci are super mild with a great crisp nuttiness. After a few puffs, the smoke density and production picks up, though it’s certainly a bit more of a struggle than a typical OpusX. The main profile does not offer a laundry list of flavors, just a very nice semi-sweet base that is floral and nutty over top of some lemon. Retrohales deliver even more floral flavors along with some burnt cookies and nuttiness. The flavor intensity seems to be full five minutes in, but trails off with each puff thereafter, while body and strength are medium-plus. This cigar had a small crack that I noticed before lighting, it gets a bit bigger once lit but doesn’t seem to affect things. The ash is not particularly pretty and is rather flaky, but construction is fine in terms of draw and not in need of a touch-up.

I think the most fascinating part of this particular OpusX is what’s not present: pepper. As I close out the second third, I still haven’t tasted any hint of pepper. The mouth flavors are similar to the first third, though there’s some creaminess and a bit of a cognac flavor. I think the floral flavors are still there, but my palate is becoming slightly immune to them given it’s been a floral bomb from the start to this point. Retrohales have orange bitters, floral flavors and an additional sweetness that reminds me of POM Wonderful. I try to push the cigar a bit to see if I can get some pepper or irritation and at times it seems like I’m about to get some white pepper, but it oddly just mixes with the nuttiness and reminds me of peanut butter. In the end, the OpusX Stefano Ricci seems to just want to be a well-developed mixture of floral and nutty flavors with some secondary sensations sprinkled in. Like the first third, the finish is just an extension of the main flavors, i.e. even more floral flavors. Flavor is full, body is medium-plus and strength is medium-plus. I’m not forced to fix any construction woes, but the ash remains ugly and flaky. There’s finally a bit of change as a toasty sensation emerges in the final third. It lasts for an inch, but eventually, it too seems to lose out to a nuttiness with some remaining floral flavors underneath. At times, the OpusX Stefano Ricci shows other flavors—sunflower seeds, leather, dark chocolate—but none of them stick around long enough to have much of an impact on the dominance of the two main flavors. Fortunately, the retrohales provide a bit of a change in pace, there’s a distinct yellow mustard flavor over some toastiness and sunflower seeds. Flavor is full, body is medium-plus and strength is medium-plus, though it’s building. 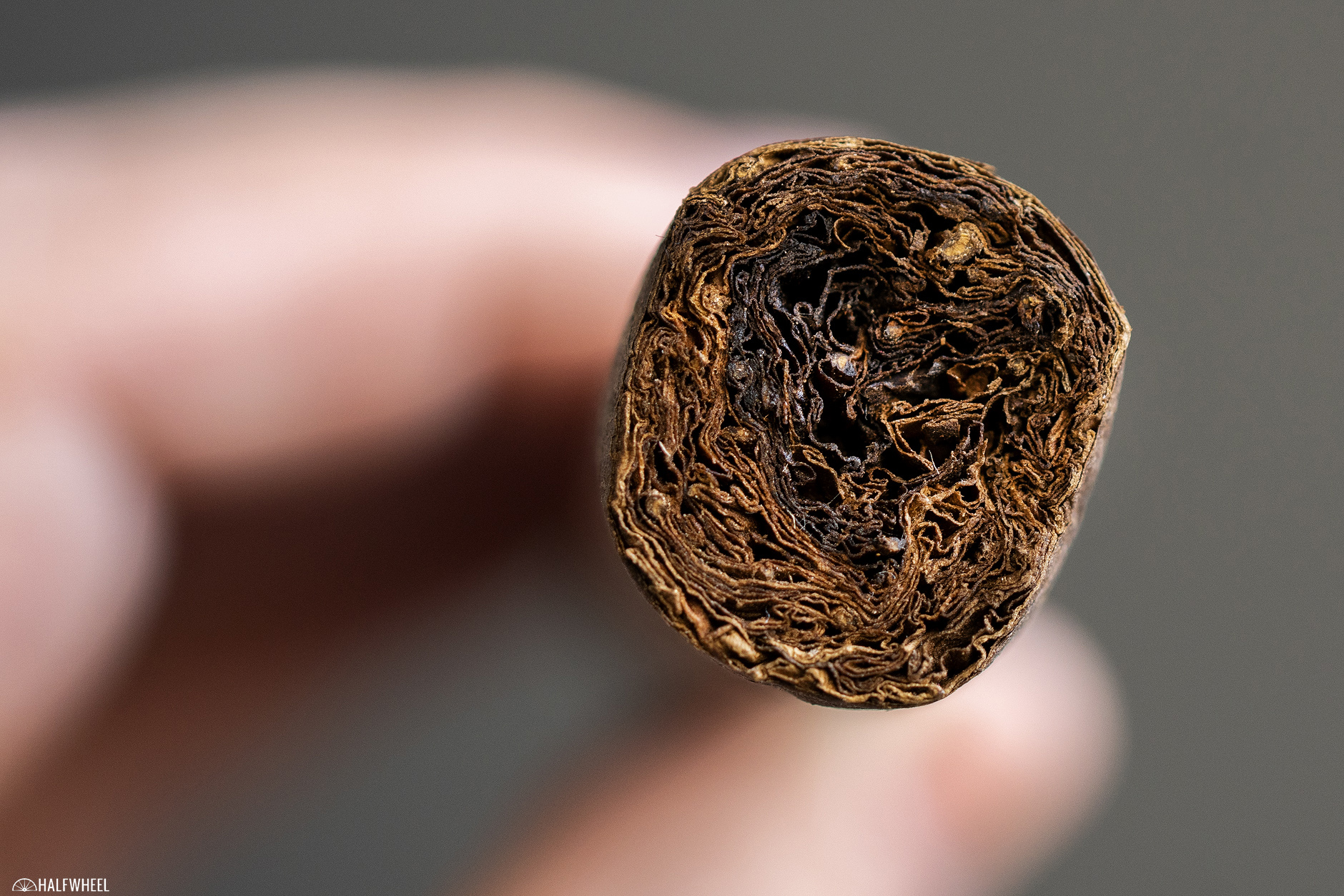 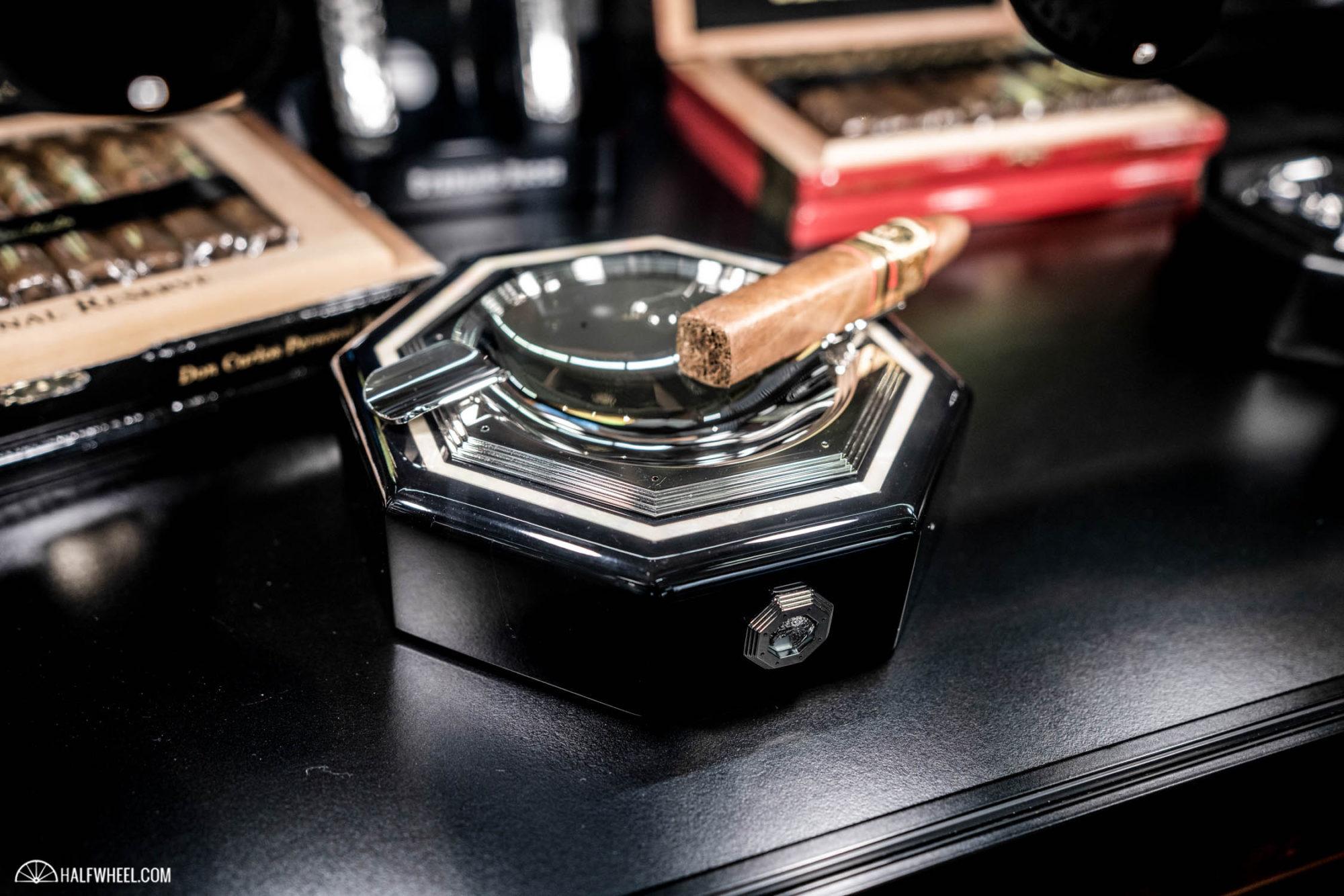 The OpusX Stefano Ricci is a cigar that I’d be very happy to smoke on a regular basis, but this was not very OpusX-like. I’m not sure if it’s as anti-Opus as the OpusX Football Brooks reviewed in 2012, but at many points, it felt like I was smoking a slightly milder 858 Sun Grown. The floral flavors that were pervasive before the cigar was lit continued until my final puff. I'm a huge fan of both floral and nutty flavors cigars and they were good in this cigar, but I really would have liked more contrast in the first two thirds.