Late in November 2015, Arturo Fuente began shipping its third new limited edition of the year to retailers, the Fuente Fuente OpusX Rosado Oscuro Oro, a new spin on the company’s flagship cigar packed in an exquisite yellow box and using a wrapper that’s different from what is normally found on an OpusX release.

The cigar’s release came near the conclusion of a fairly big year for limited editions from Fuente, arriving a short while after the two Don Carlos 80th birthday releases, the Don Carlos Personal Reserve Robusto and the Don Carlos Private Blend Eye of the Shark.

While consumers were still in a fervent hunt to track down these releases, Fuente dropped another new release on them, as the cigars use a rosado oscuro wrapper from the Chateau de la Fuente farms. Inside each box were 15 cigars split into three each of five different sizes. 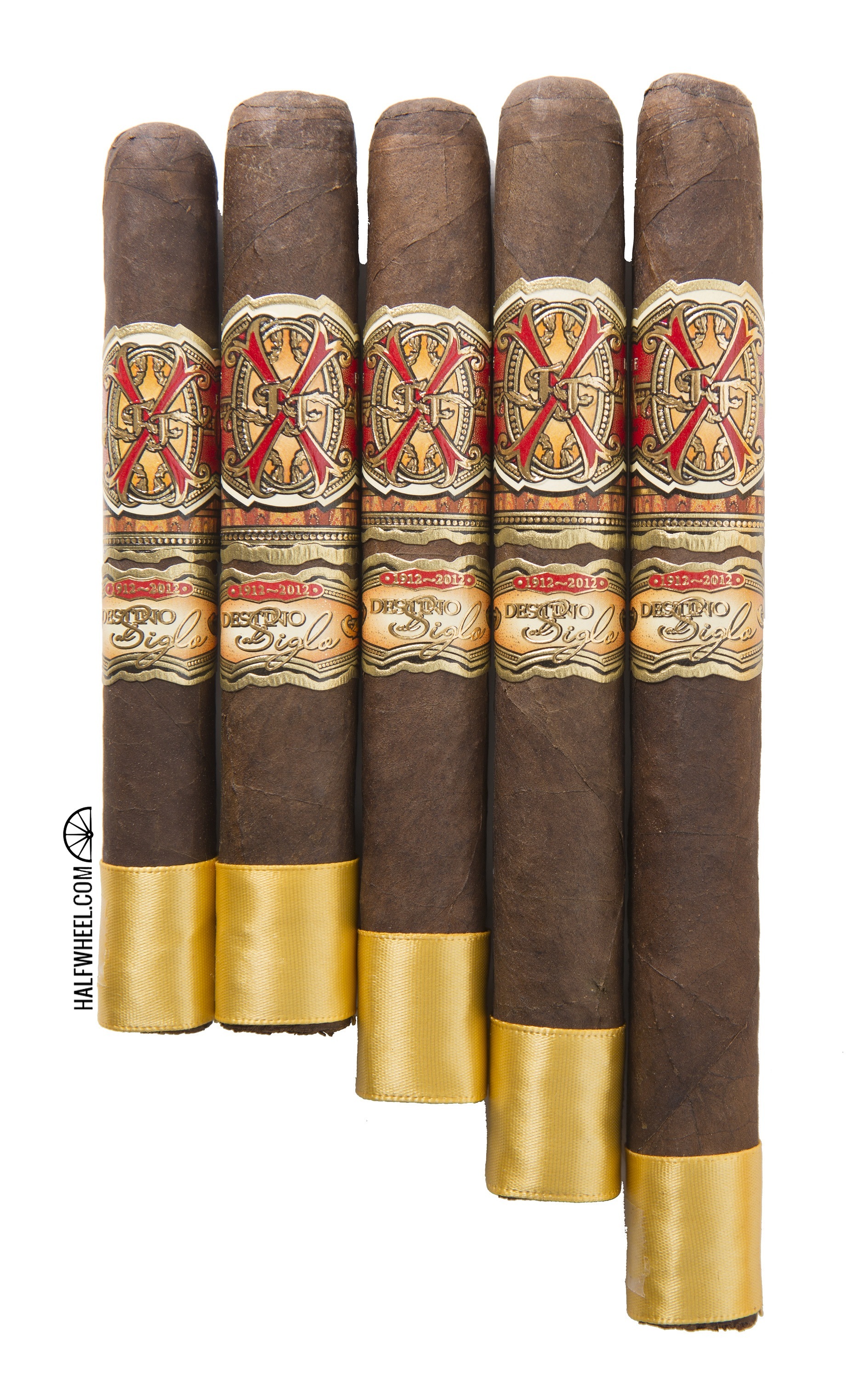 The impressive set came without an MSRP for individual cigars, though most priced out around $250 for the set and between $15-$25 per cigar. 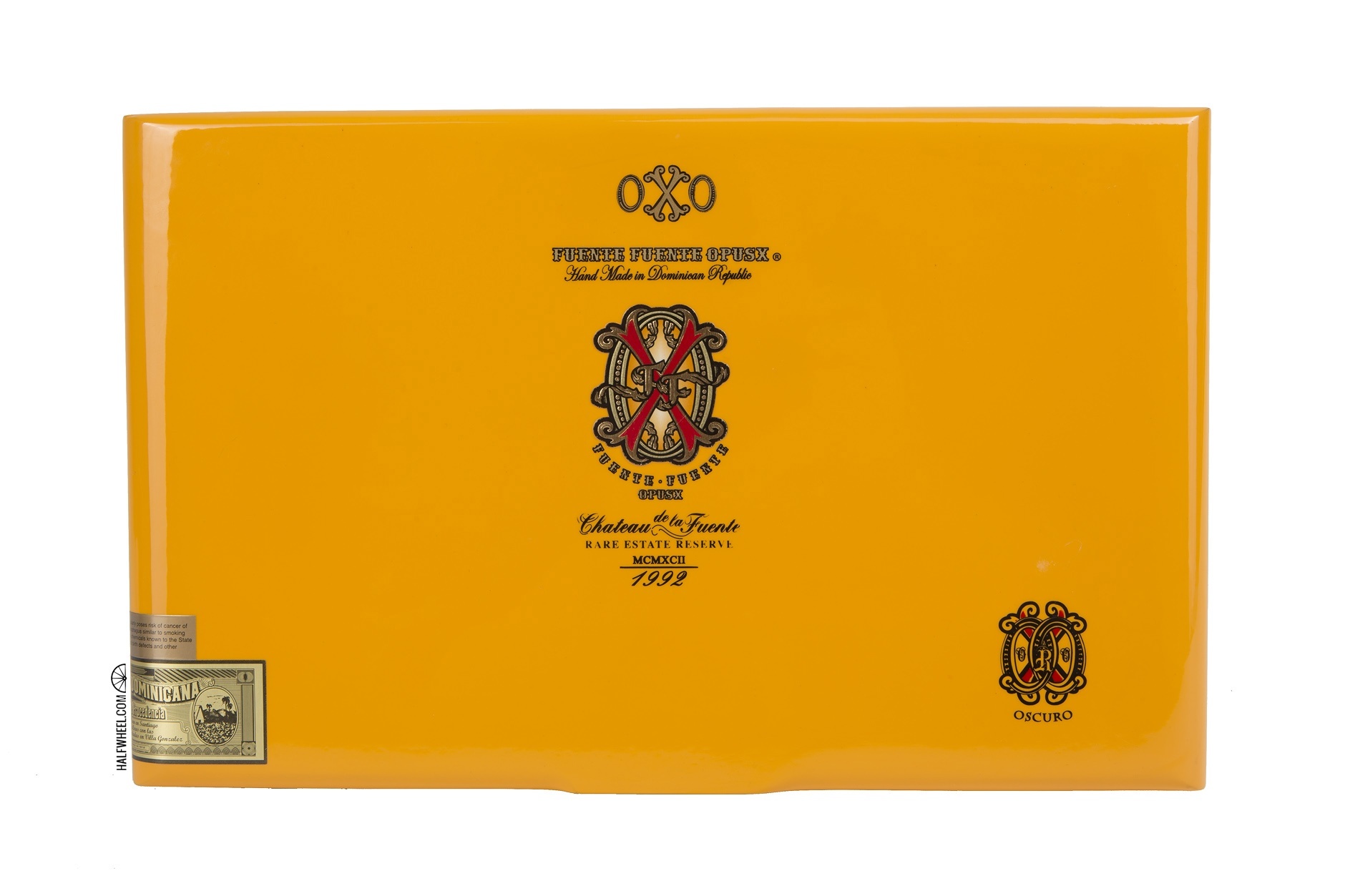 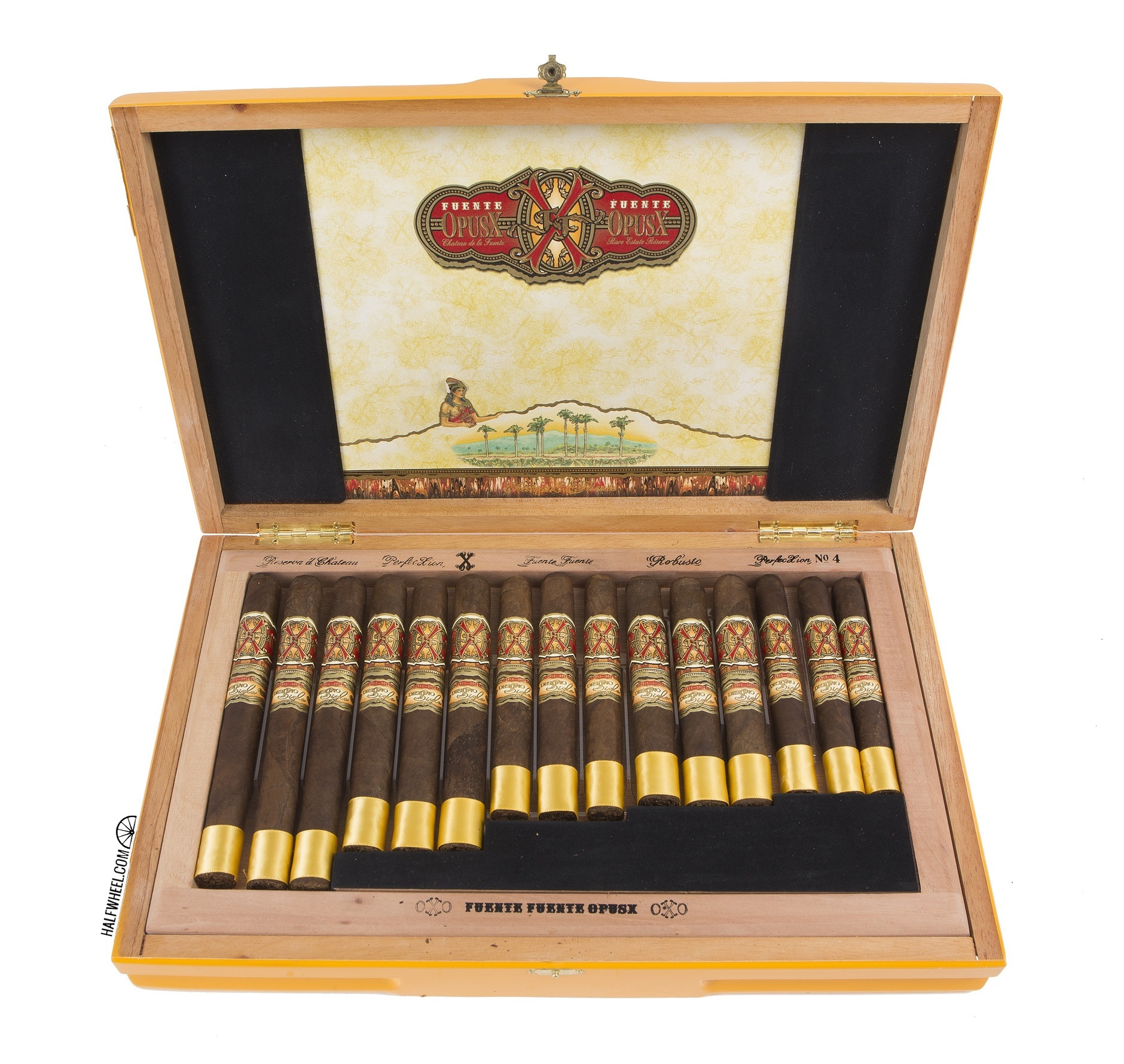 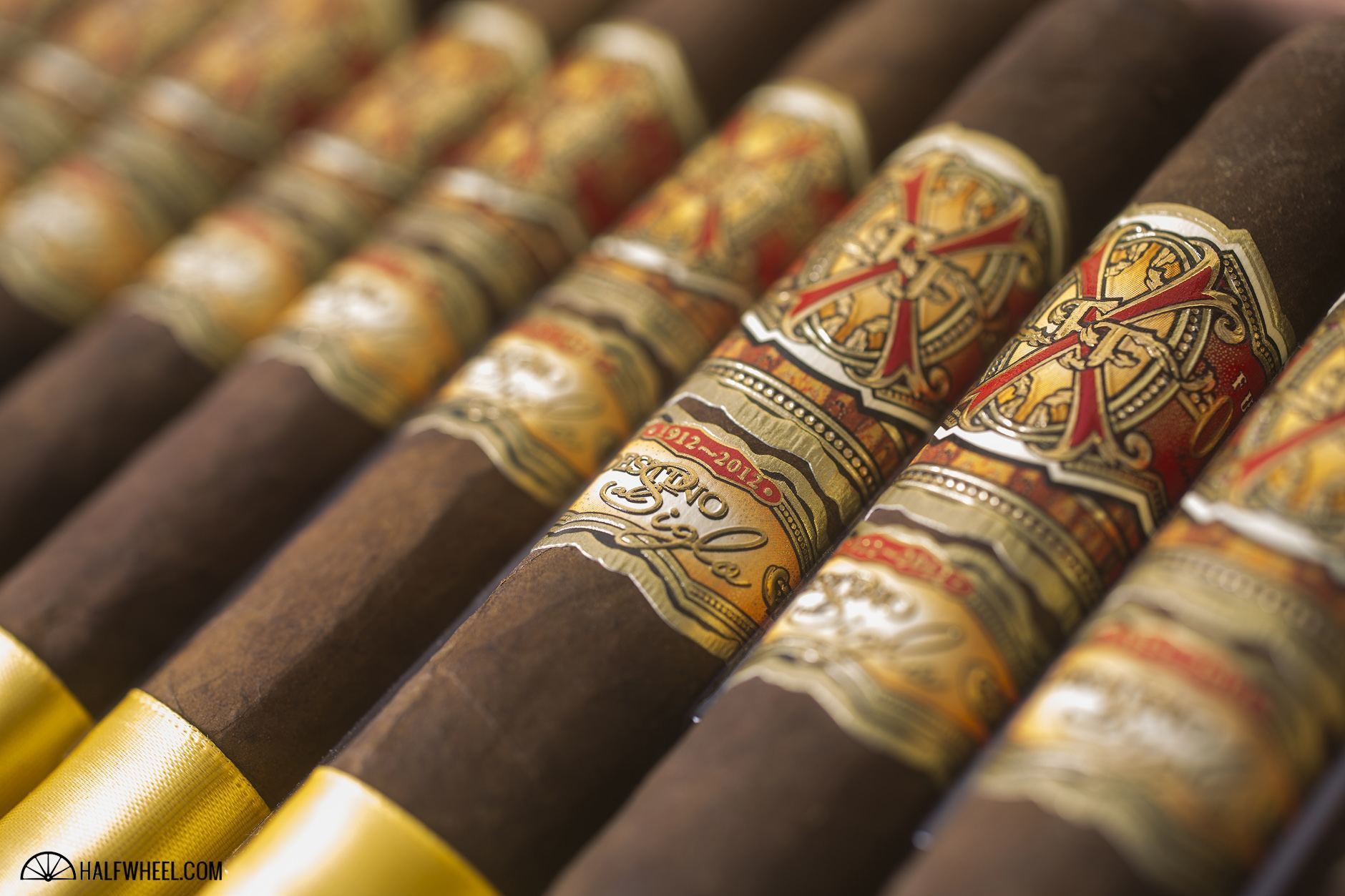 This new OpusX comes adorned with a couple of distinguishing characteristics to help set it apart from others dressed similarly; while the primary OpusX band is the same and the secondary Destino al Siglo band should be familiar, the addition of a gold ribbon at the foot of the cigar is the giveaway. In addition, frequent OpusX smokers will notice that the wrapper is different than other releases; it’s darker and shows colors that skew to reddish brown and near black at times. 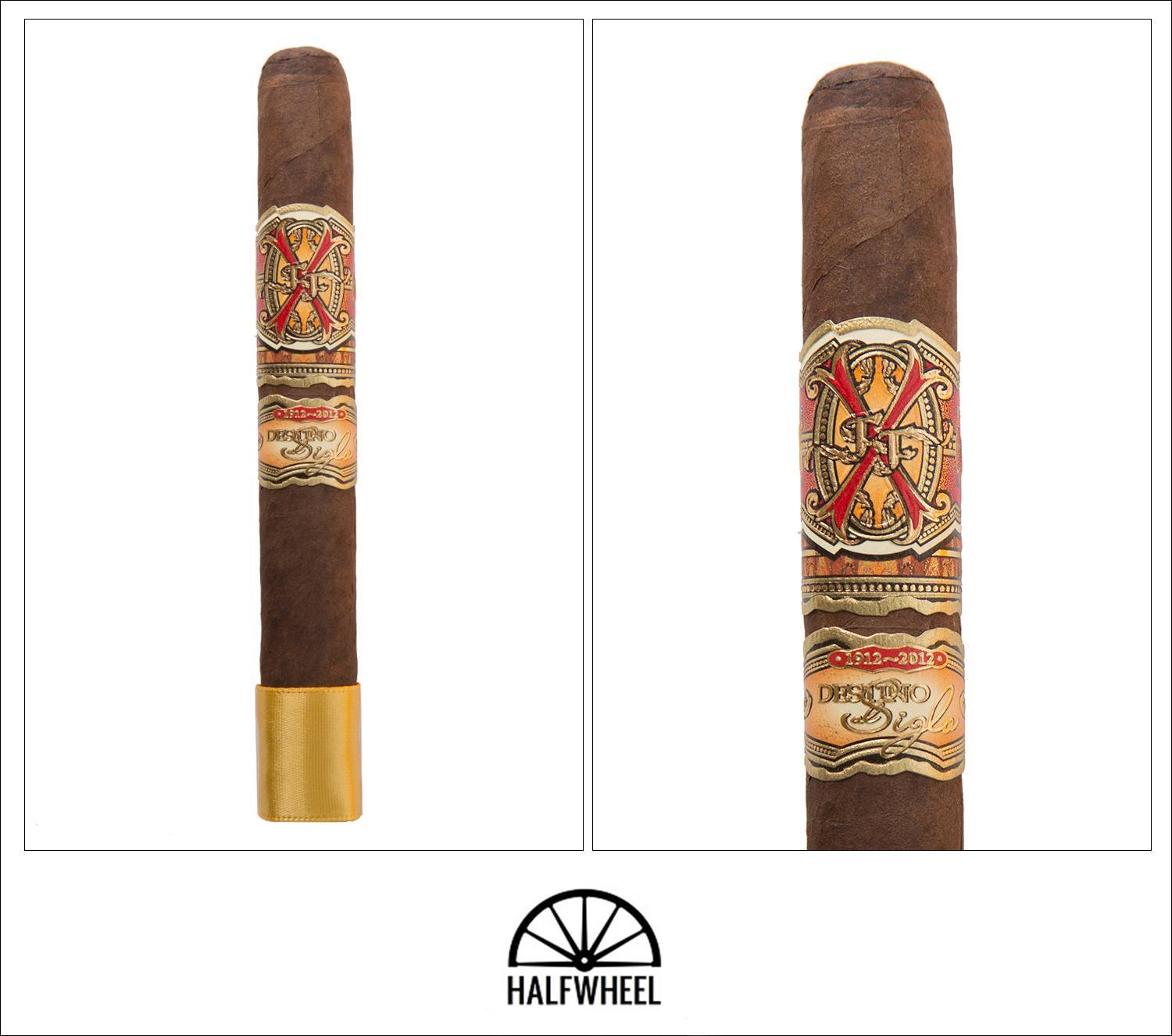 The bands on the OpusX Oro are unmistakable in their boldness, and as noted above the gold foot ribbon gives the Fuente Fuente OpusX Rosado Oscuro Oro PerfecXion No. 4 its signature presentation. The cigar’s wrapper has a bit of a reddish tint to it but some samples can skew very dark and earthy, even those from within the same box. While it may appear to look like any other OpusX at first glance, holding it next to another one will easily show the difference, and a close study will show just how well it matches the colors of the bands. It’s a firm and dense cigar with no soft spots and about as perfect of a roll as I can recall seeing. There isn’t a pronounced smell coming from the foot; I get a bit of cherry and wood, reminding me of a beer I had once that had a similar infusion and aging process, while the darker wrappers seem to offer more earth and a bit of root beer. The cold draw is on the loose side and slightly sweet and woody as well, though a bit of pepper hits the front of the tongue.

I’m left wondering what words to use to describe the opening puffs of the OpusX Rosado Oscuro Oro, as there are flavors of sweetness, pepper and earth present, but they’re not quite clear in the first minute or two of smoking. Fortunately, that knot of flavors untangles itself very quickly and prominent notes of pepper stand out both in the nose and on the palate. It is at the expense of the sweetness, as the cherry note has moved well into the background, traded for a bit of chalk and mineral. While the cigar puts out ample smoke, it is by no means a smokestack, with its other technical aspects performing fairly well in the first third and the first bit of ash dropping off at just about two-thirds of an inch. The pepper continues to be the lead note, it softens just a touch and it’s that process that seems to queue up the transition to the second third with a very enjoyable cocoa powder note that doesn’t overly sweeten the flavor but does just enough to nudge it in the right direction. The blend has become a bit more robust in the final puffs of the first third, with pepper coming in varied amounts and a bit more blunt of a medium-full profile now being offered. 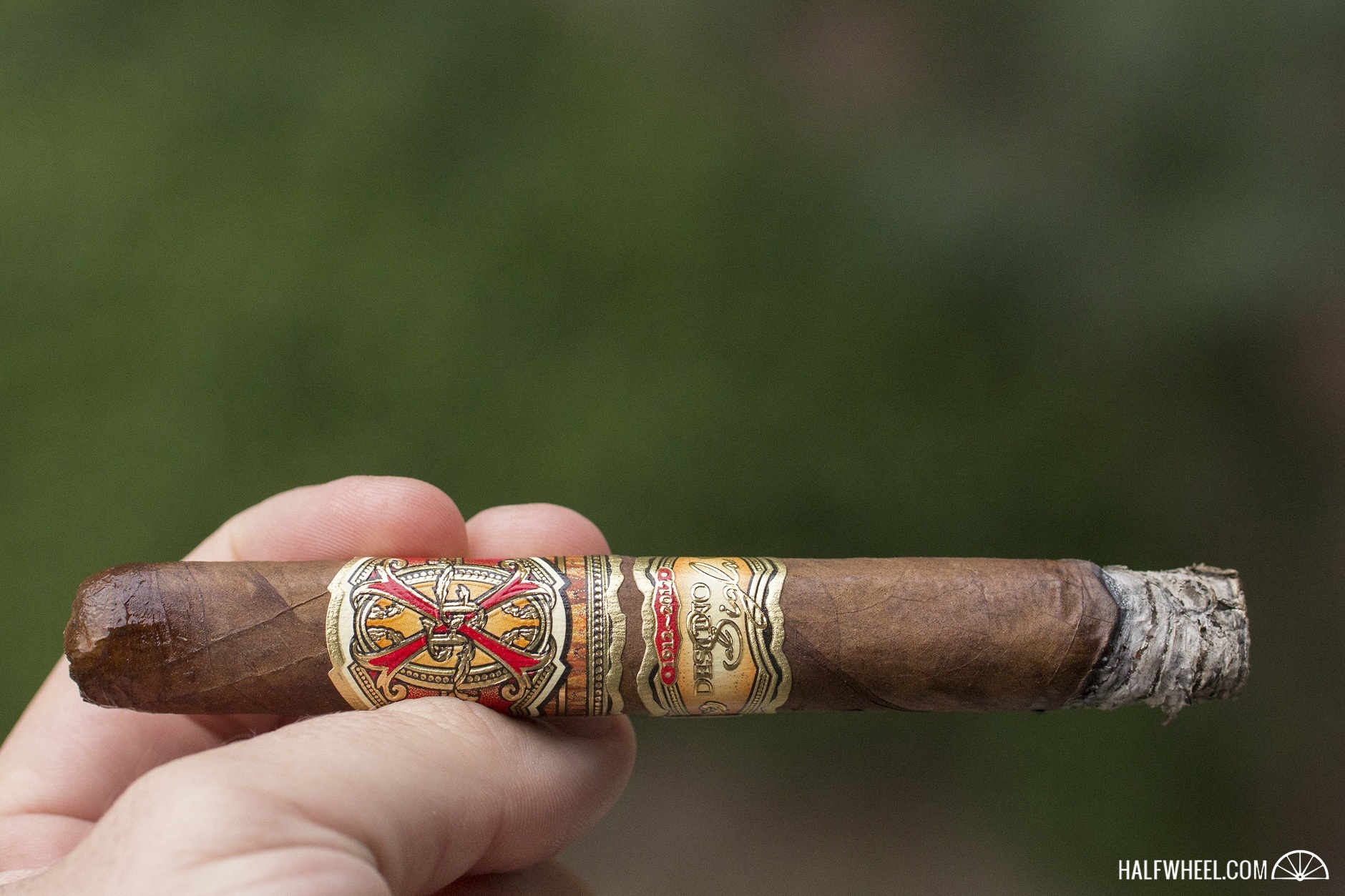 While the Fuente Fuente OpusX Rosado Oscuro Oro PerfecXion No. 4  doesn’t make a big leap from first to second third, the most noticeable progression comes by way of the addition of some rich cherry sweetness and sweet wood, two flavors that I have picked up throughout the cigar but that haven’t made an appearance in some time. While the cigar wasn’t necessarily lacking sweetness, their addition is certainly welcomed and spins the cigar in a slighty different direction. Strength is still a solid medium and flavor is medium-full, but the cigar suddenly doesn’t present those same notes that elicit the response of OpusX needs at least a year to rest and mellow out before it can be smoked and enjoyed. Crossing through the midpoint, the cigar becomes fuller in the mouth, as the smoke gets denser and offers a bit of warm nuts and terroir, but thankfully the pepper has stayed balanced and isn’t overpowering the rest of what the cigar holds. I also begin to get a bit of chalk and mineral on one sample, with a profile that I find tends to be often associated with Dominican tobacco. The draw and burn both remain fantastic, while the smoke production has picked up a bit and the ash holds on fairly well. 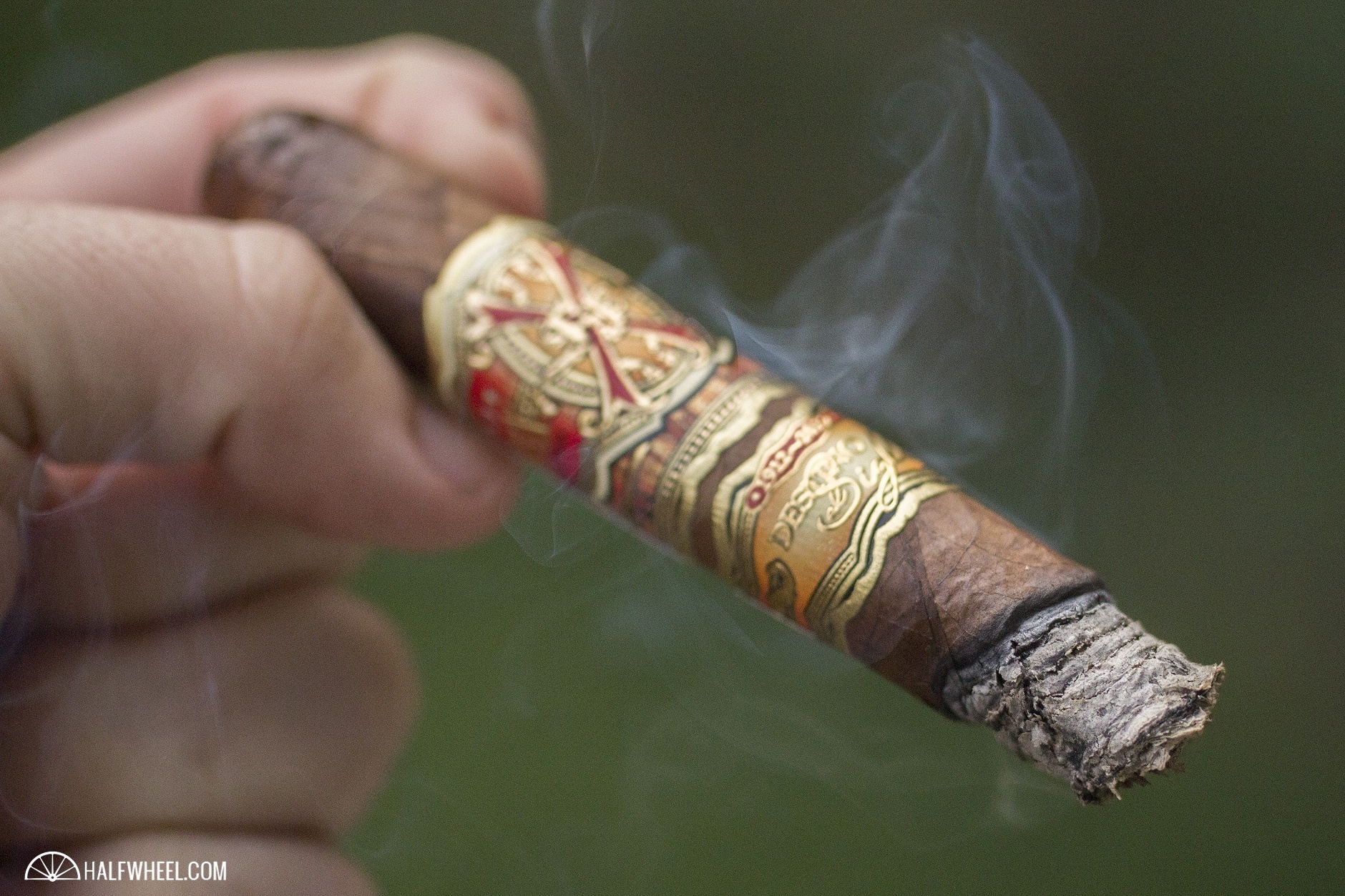 I’m a bit amazed how quickly the burn line moves from the midpoint into the final third, and I certainly don’t think I’m smoking the cigar any faster than I was previously. The combination of flavors continues to evolve, not so much via the addition and subtraction of anything but rather by how the combination hits the palate. One puff is full and robust, while the next is a bit softer and shows the backing notes better and yet another delivers a zing of pepper to the tip of the tongue or into the nostrils. As with all smaller ring gauge cigars, puffing has to be done at a tempered rate in the final third, and the OpusX Rosado Oscuro Oro will offer a reminder of that by getting just a bit bitter and sharp, but a slower rate results in a much more balanced flavor. Nicotine strength has yet to be an issue with this stick, as almost all of its effects are felt above the throat, something that lends further suggestion that this is a cigar ready to be smoked now. The cigar closes out with mouthfuls of soft smoke that still has substantial flavor. 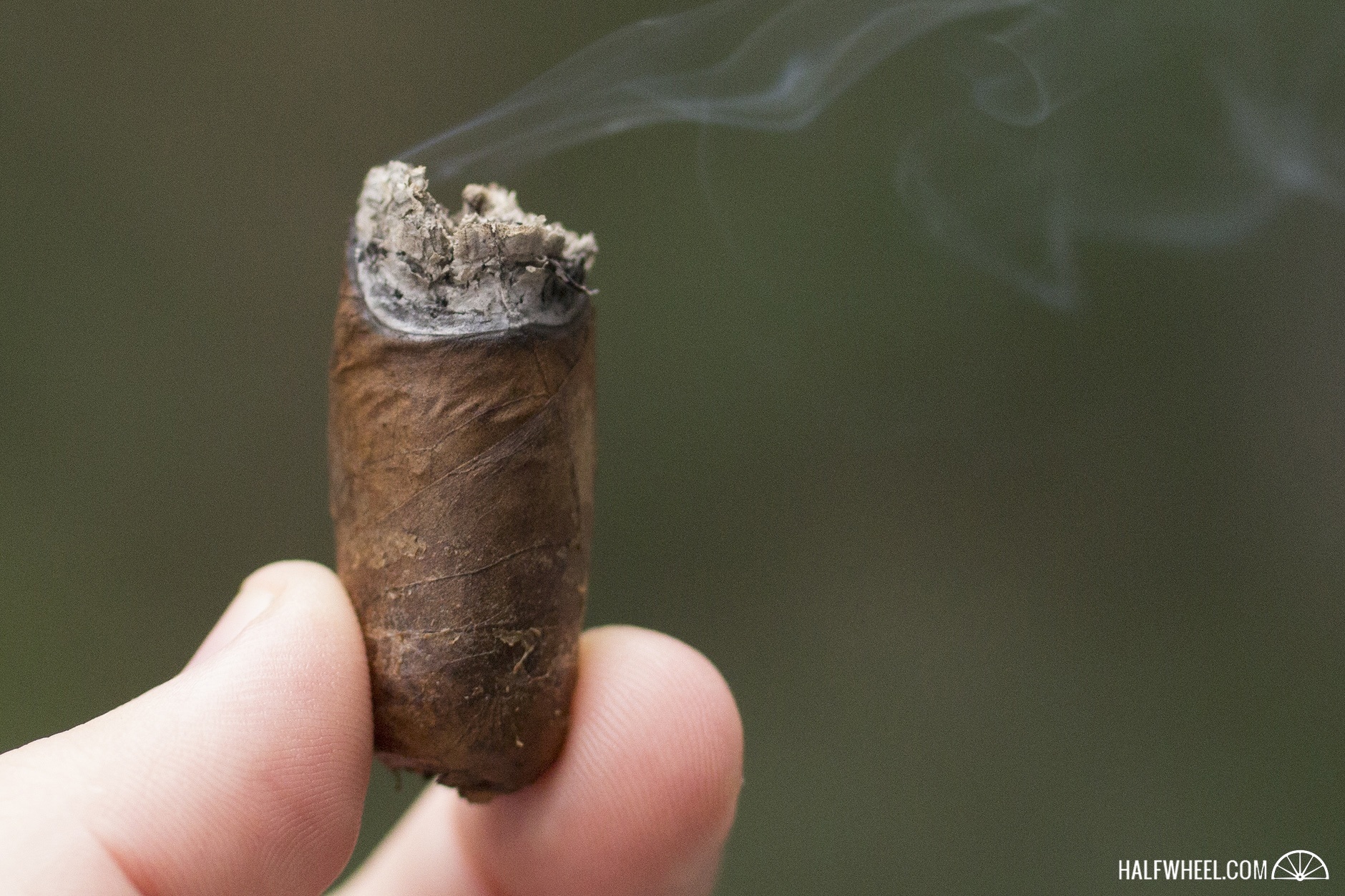 When it comes to Fuente’s OpusX releases, it’s almost a no-brainer, gut instinct purchase for many people, and certainly for good reason. It was one of the first cigars of the modern era to garner attention because of just how hard it was to come by, let alone the strength and flavors it offered. I’m sure that for a good number of people reading this, forking over the money for the OpusX Rosado Oscuro Oro box comes without much thought, which means that fewer will be available for those wanting to try one or two out. Now if you fall into that latter camp and if you can find some of the Fuente Fuente OpusX Rosado Oscuro Oro available, I certainly think it’s worth picking up a few, and if the wallet allows the entire sampler. The flavors are an enjoyable departure from the standard OpusX profile and when the sweetness comes together with the heavier earth and pepper, the combination is definitely a win.