There’s a particular shelf at Casa Fuente in Las Vegas, and visitors to the store likely know exactly which one I am talking about. To find it, walk into the humidor, go to the back corner where the gates are. On the middle shelf are some trays.  Chances are quite good there are cigars you’ve won’t often—if at all—see at your local cigar shop: BBMFs, LBMFs, Casa Fuente Anniversary releases and finally, some weird size cigars with OpusX bands. A couple of years ago, one of those cigars was a massive perfecto that said “MAN EATER” on the cellophane. Not much is known about the cigar, though Fuente did register a trademark for the name. The Man Eater is massive. It’s not OpusX Football large, but it’s a much larger cigar than most people typically smoke. The wrapper looks good with the deep caramel color that has become synonymous with OpusX. Aroma off of the wrapper is medium-plus with leather, sweetness, oatmeal and some underlying sweetness, and while it’s medium-plus, it all feels a bit muted. The foot is both stronger and sweeter with the oatmeal flavor and Spanish cedar as the main flavors on top of something that smells like canisters of frozen orange juice and burnt tomato sauce. The cold draw tastes like an oatmeal stout; it’s neither particularly sweet nor particularly interesting, though it is medium-full.

The flavor starts similar to the cold draw: toastiness, cedar, oatmeal cookies and a touch of mustard. With the exception of that final flavor, it’s quite like a normal OpusX, and flavor-wise, that’s how the first third is. There’s a hearty cedar, a semi-sweet apple cider and intermittent flavors of oatmeal cookies. Outside of the massive size and lack of pepper, the cigar is very much like many OpusXs I’ve had before. But there’s also no escaping the size and it’s not all good. While there is a ton of smoke pouring out of the foot, it’s not getting to the mouth. I end up making a second cut, which helps a bit, but doesn’t entirely fix the problem. In addition, touch-ups are needed as the cigar fails to burn evenly. Flavor is full, body is medium-full and strength is medium-plus. Two hours after I lit up the Man Eater, the second third has arrived. The core of the very large OpusX is similar to the first third—with cedar and some semi-sweet flavors underneath it—but there’s now a large increase in creaminess. There are also secondary flavors of earthiness, lemon and a bit of leather. Retrohales around the halfway point deliver a very unique and enjoyable Aperol sweetness. Flavor remains full, body is fuller—though still not full—and strength is medium-plus. Every half hour or so I look down at the cigar and realize the burn is off and the draw could be better. 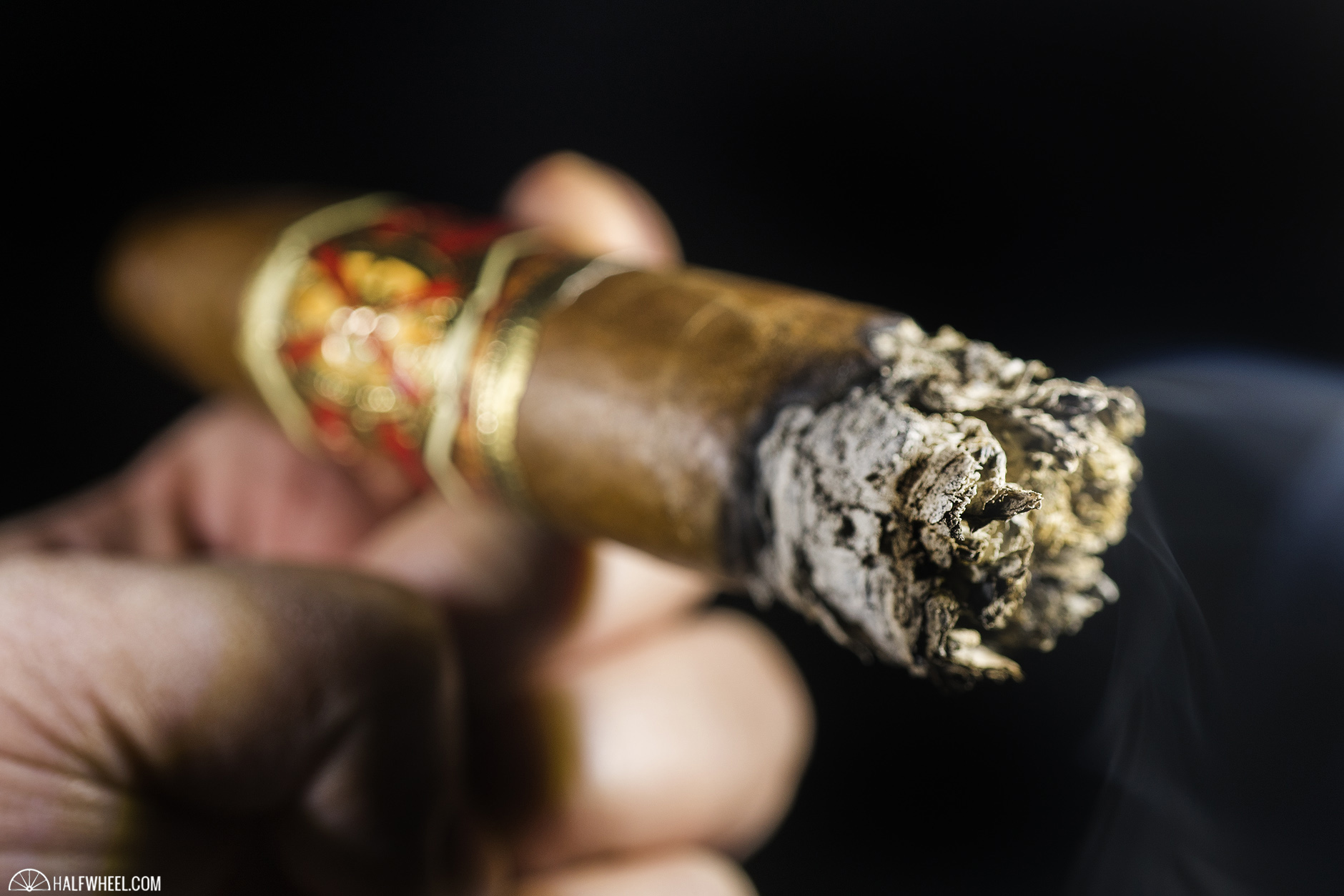 The final third of the Man Eater comes a bit quicker than the second third, though it’s still been over three hours before I get to the final two inches or so. Flavors aren’t very consistent; at times, some burnt chocolate chip cookies dominate the profile, but it only lasts a handful of puffs each time it appears. When the burnt chocolate chip cookies aren’t present, there’s cedar, creaminess, lemon and for the first time, a mild amount of pepper. Through the nose, there’s one of the more bizarre flavors I’ve ever tasted in a cigar: a sharp funk that reminds me of gruyère cheese. Flavor is full, body is full and strength is still not very much beyond medium. The burn issues continue until the very end, though the cigar never gets close to going out. The OpusX Man Eater is actually a good cigar, but it's almost certainly not an OpusX. While the sweet cedar flavors that I often associate with the flagship Fuente blend were present from start to finish, the strength was nowhere to be found. Additionally, while we don't judge cigars based off of how well they live up to their name, it would seem that a cigar dubbed Man Eater should pack at least some punch. Ultimately, the cigar gets punished for consistent touch-ups and a poor draw, but the flavor was good, albeit, a bit dull.