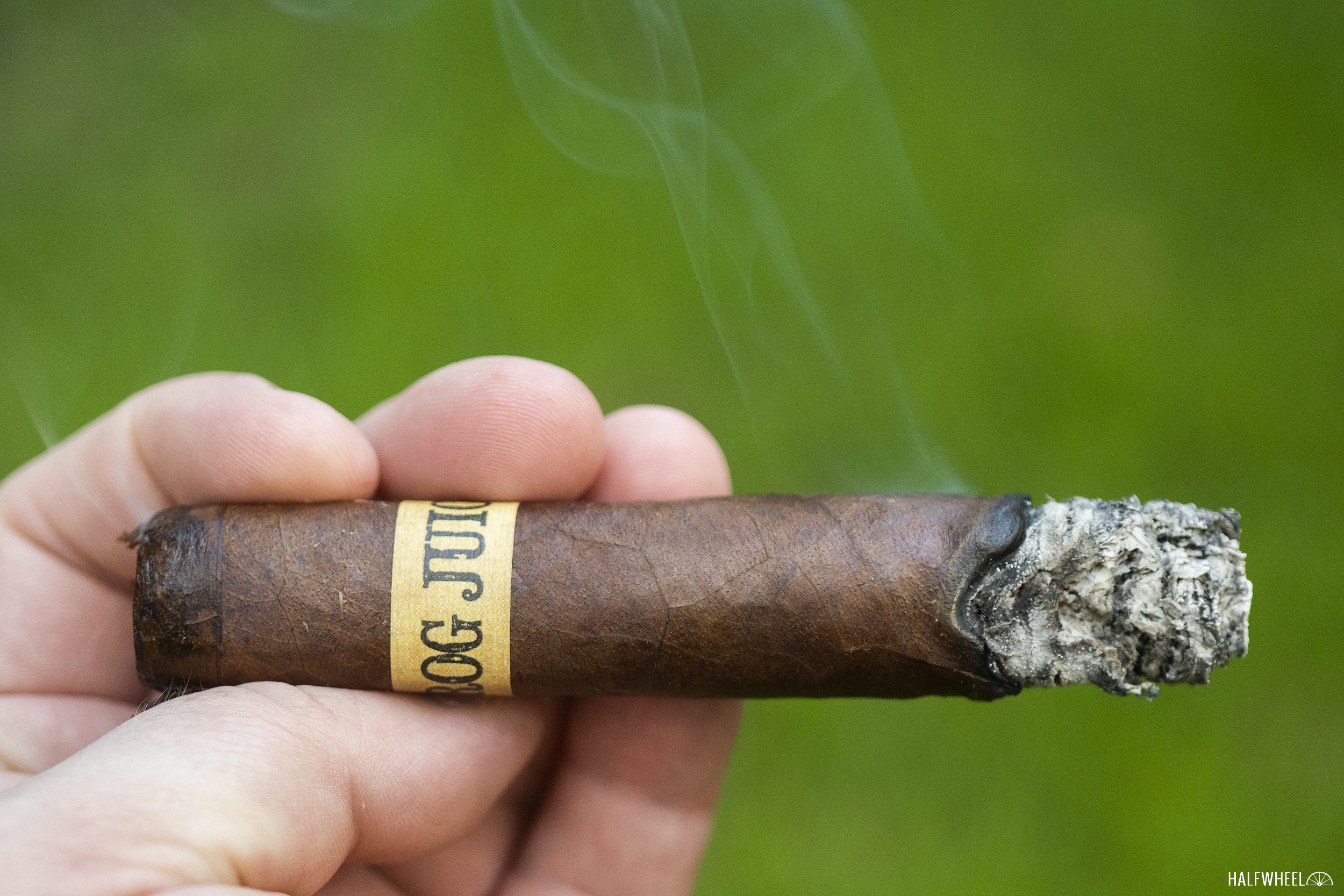 In the past few years, Riverside Cigar Shop & Lounge has put together an impressive collection of store exclusive releases from several manufacturers including the Tienda Exclusiva by Willy Herrera Lonsdale, CroMagnon Epoch, CRAFT 2019 and Viaje’s first Connecticut-wrapped blend, the upcoming WLP Match.

One of the most anticipated exclusive blends for the Jeffersonville, Ind.-based retailer has been the Dunbarton Tobacco & Trust Frog Juice, a 5 x 52 soft box-pressed robusto gordo with a small colita, basically a short but stiff pigtail on the cap. Packaged in bundles of 10, the new release is made up of an Ecuadorian habano 2000 wrapper covering a Nicaraguan shade-grown binder and filler tobaccos from both the Dominican Republic and Nicaragua. 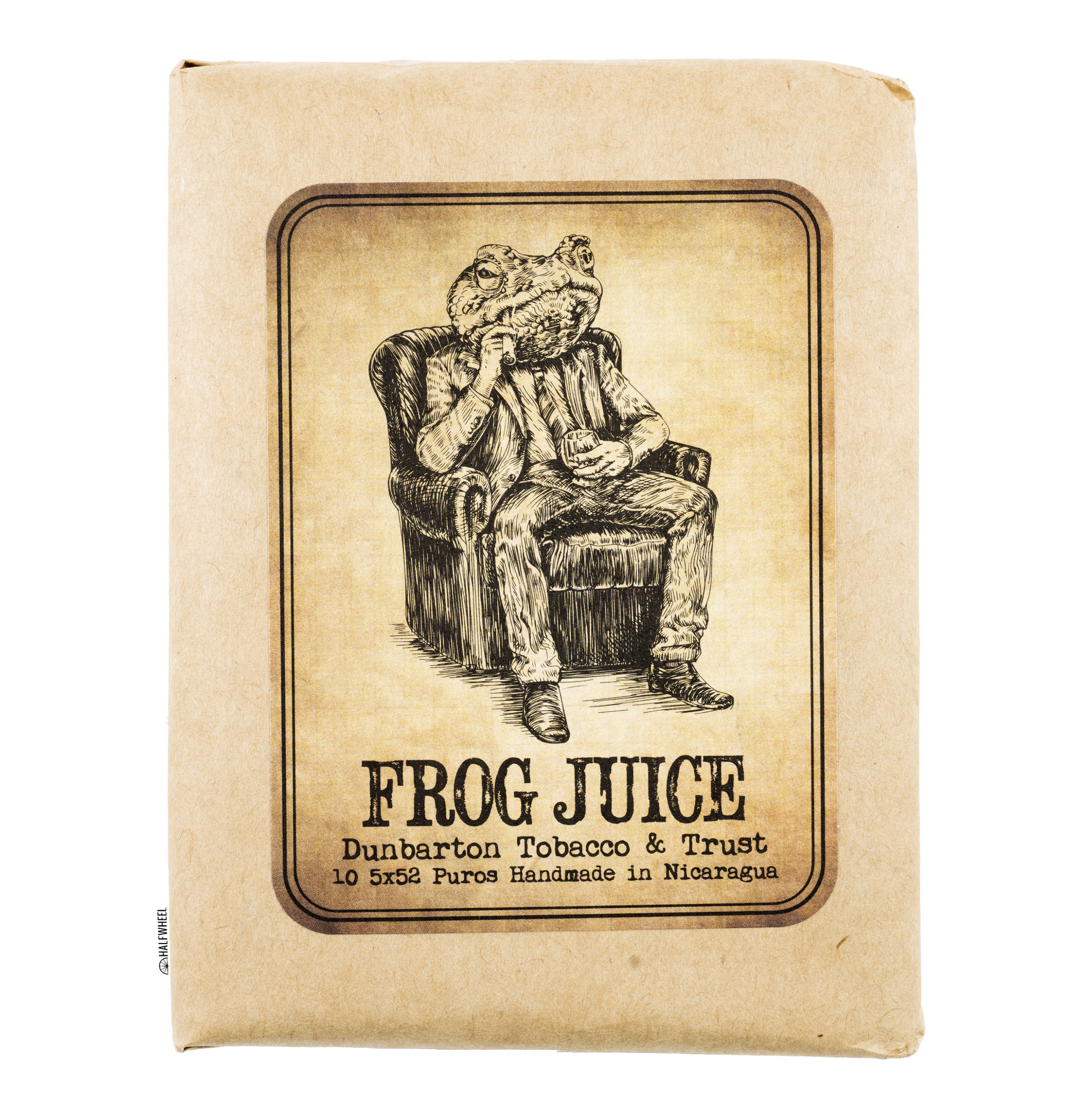 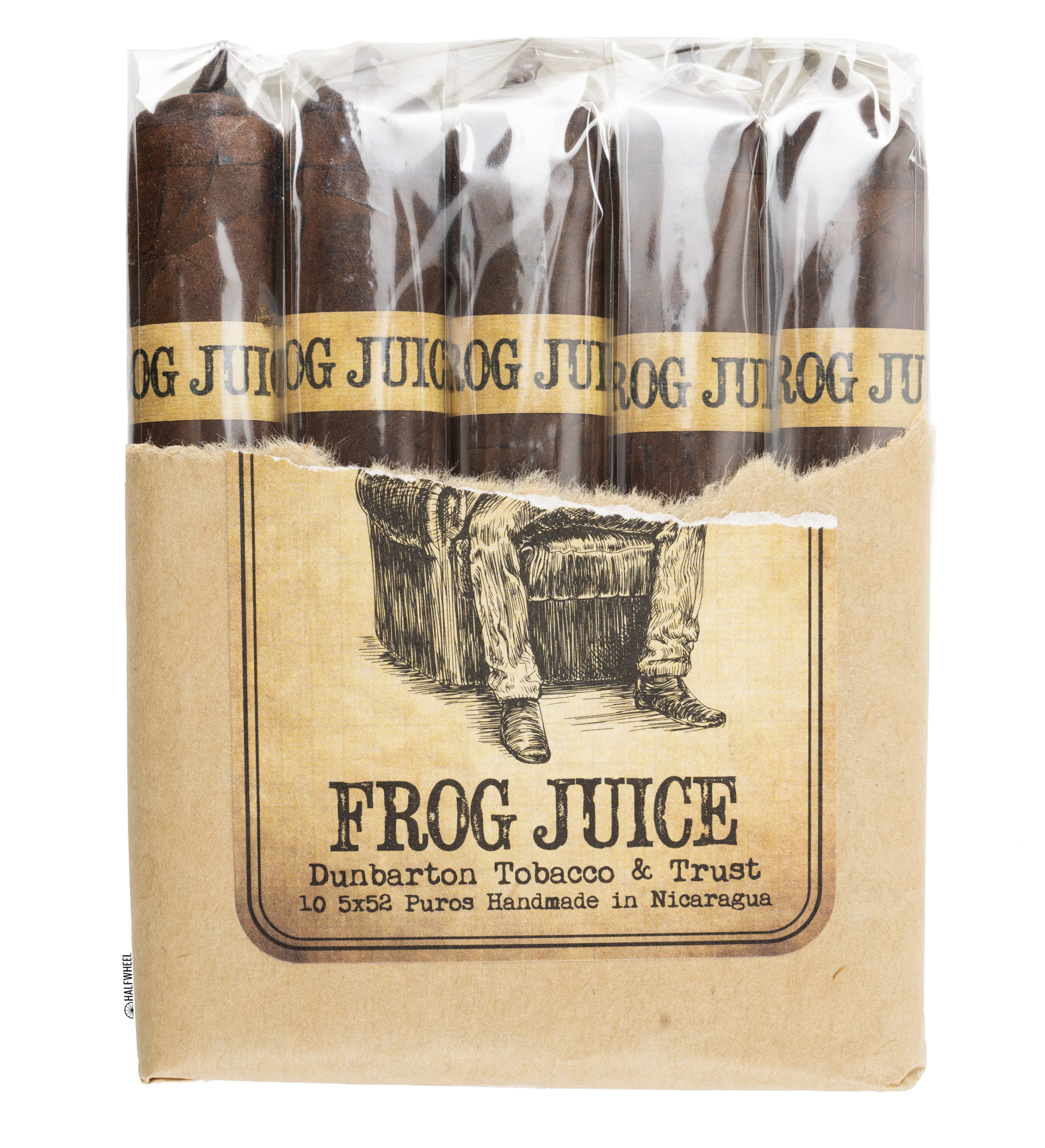 There were only 250 bundles of the Frog Juice produced at Nicaraguan American Cigars S.A.—the same factory that produces Dunbarton’s Mi Querida blend—and each cigar was priced at $12.50.

Steve Saka, owner of Dunbarton Tobacco & Trust, gave an explanation for the cigar’s unique name in a post on Facebook:

Just to put the name in context – originally these were planned to be released at a special event during Kentucky Derby weekend and centered around the famous horse race, “frog juice” is a slang term to describe a drug they use to illegally performance enhance race horses… granted, I can understand why someone might still think it is stupid, but this is the origin of the moniker used for this limited release.

While the planned June 6 release event at Riverside was canceled due to the COVID-19 coronavirus, the cigars still went on sale, and all 250 bundles have since sold out. 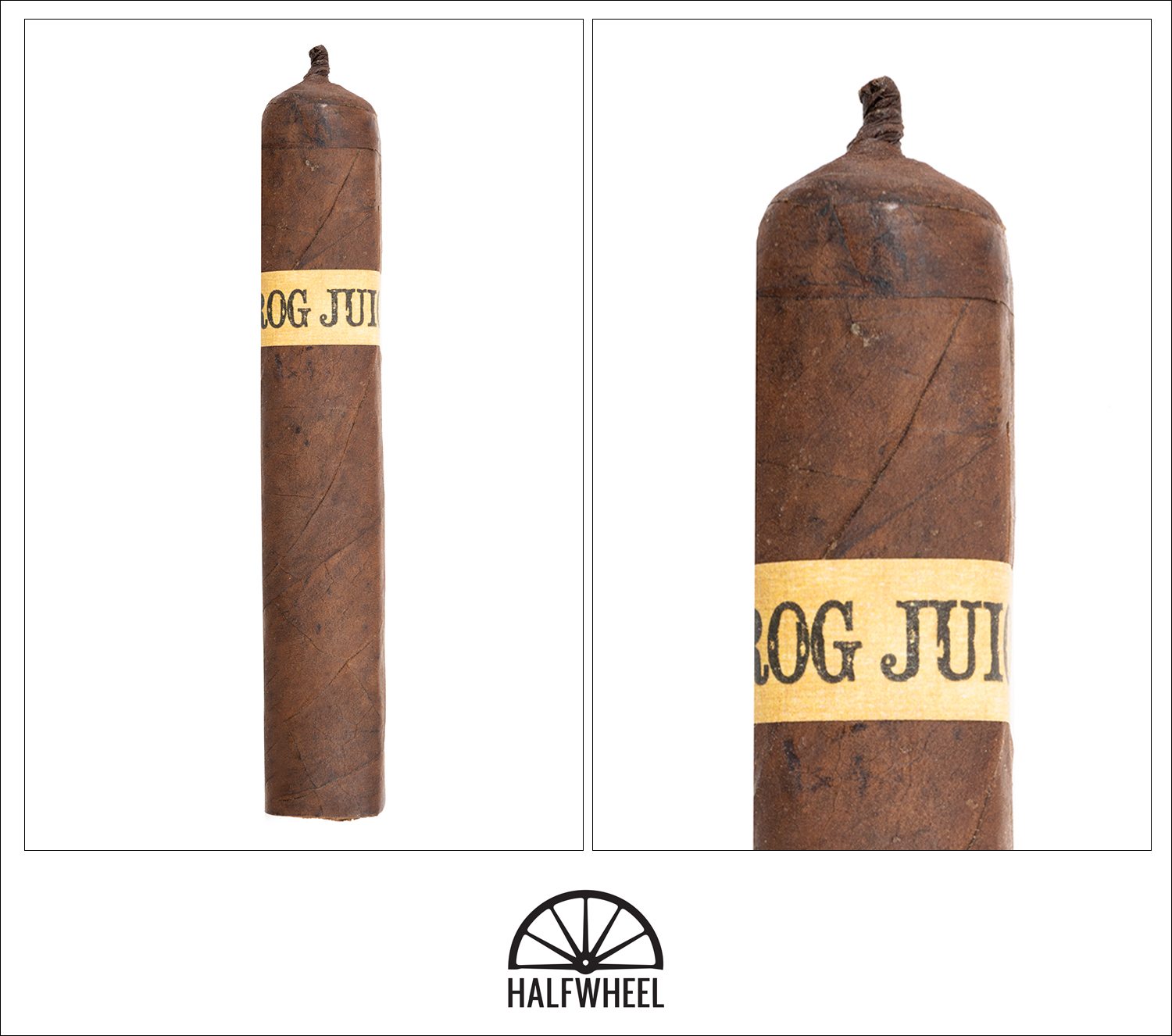 The combination of a wonderfully mottled mocha brown wrapper and the small colita is the first thing I notice when seeing the Frog Juice for the first time, but actually picking it up makes me realize just how silky smooth the cover leaf is with nearly no overt veins to speak. The soft box press is extremely well done and the cigar is nicely spongy when squeezed. The aroma emanating from the wrapper is a combination of strong almonds, dark chocolate, tea leaves, hay, barnyard, leather and vanilla, while the cold draw brings flavors of cocoa nibs, creamy oak, leather, potato chips, tea leaves and a strong raisin sweetness.

A blast of brown sugar and black pepper greets me immediately after toasting the foot of the Frog Juice. While both fade to the background fairly quickly—replaced with a dominant dark chocolate and oak combination—they each remain part of the profile. In addition, lesser notes of leather, espresso beans, hay, peanuts and bread flit in and out, while a distinct cinnamon flavor is present on the finish. There is also a light spice on my tongue that is increasing as the first third continues, but not strong enough as of yet to really have an effect on the overall profile. In terms of construction, a straight cut gives me a close to perfect draw while the cigar burns without any need for a touch-up. The smoke produced is pouring off of the foot like a house on fire. Although overall strength takes a bit of time to get started, it ramps up enough by the end of the first third to hit a point closer to medium than mild.

The combination of dark chocolate and creamy oak easily continues to dominate the profile during the second third of the Frog Juice—albeit with a bit more of the former and a bit less of the latter—while the brown sugar and black pepper notes increase noticeably. Other flavors include fragrant espresso beans, nutmeg, hay, peanut butter, earth and dried tea leaves, the latter of which seems to be getting stronger as the second third continues. While the spice on my tongue reverses course and fades a bit compared to the first third, the cinnamon on the finish has increased a bit. Construction-wise, the burn becomes problematic enough that I am forced to touch it up a couple of times, but the draw continues along its excellent path and the smoke production remains both copious and dense. Strength increases a bit, but it is still short of the medium mark by the time the second third comes to an end. 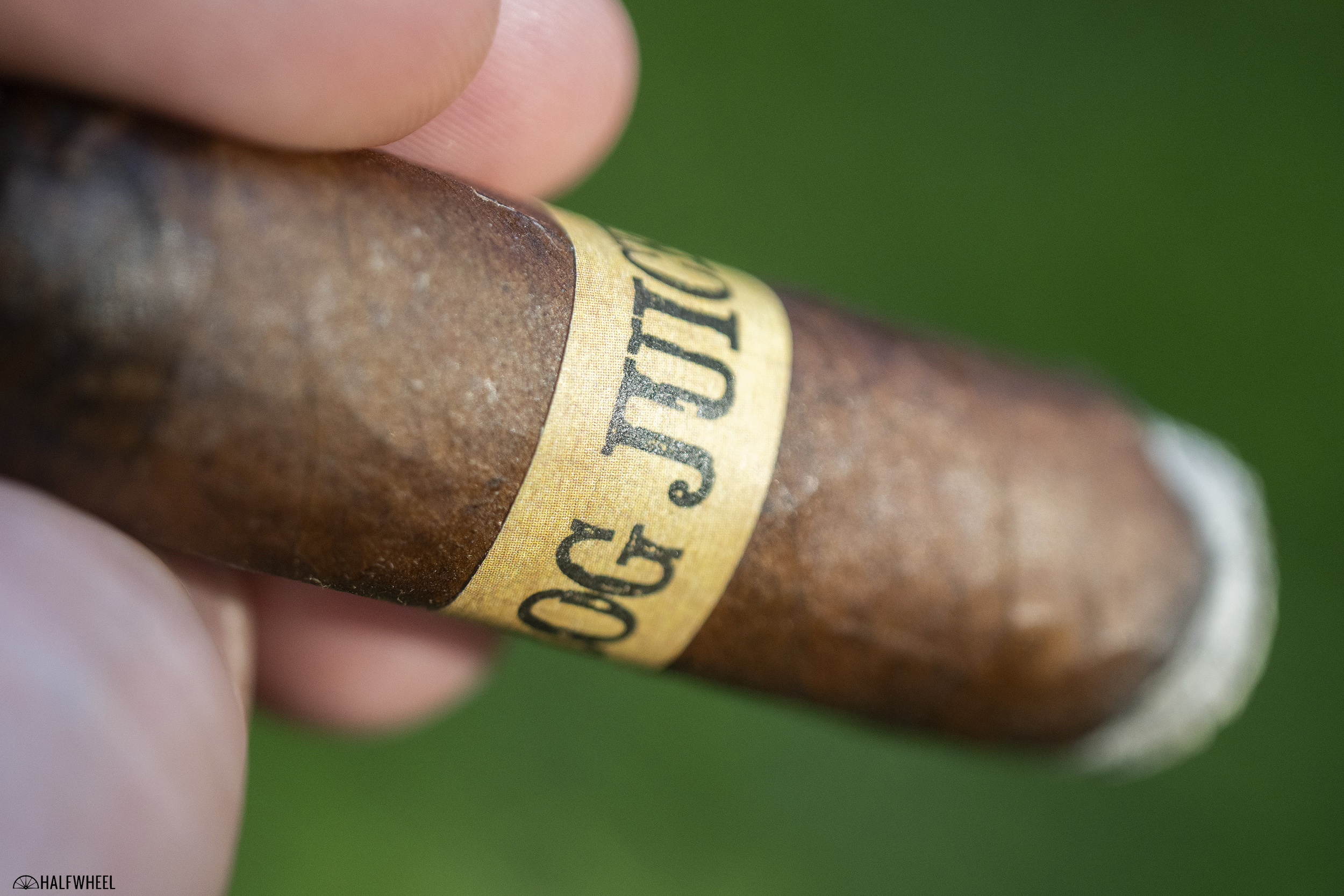 The dominant flavor combination is now made up of bitter dark chocolate and salted peanuts, reminding me of the chocolate peanut clusters my mother used to make us as treats when I was growing up, albeit less sweet. Additional flavors of dried tea leaves, hay, oak, earth, espresso beans, anise and a slight floral round out the Frog Juice’s main profile, while the cinnamon continues to be a significant player on the finish. The black pepper on the retrohale seems to stall a bit, but the brown sugar sweetness becomes a bit more aggressive, while the spice on my tongue from the first third disappears completely. The burn is also back to being free of issues. Overall strength increases enough to pass into medium territory by the time I put the nub down with a bit less than an inch remaining. 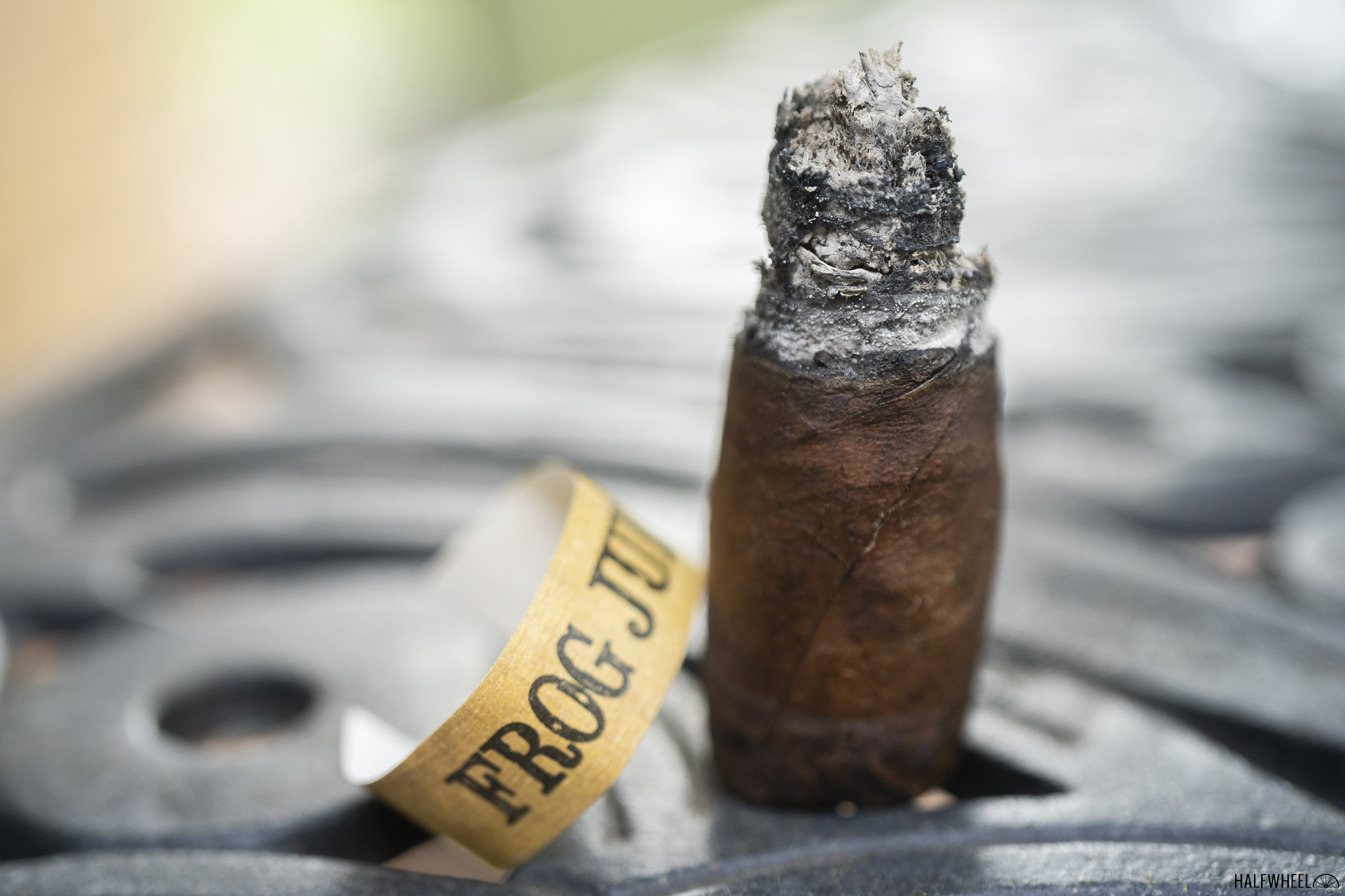 With its combination of unassuming band and smooth wrapper, the Frog Juice looks like a simple cigar, but anyone assuming that based solely on a visual inspection would be dead wrong. In reality, the profile is complex, nuanced and extremely enjoyable. It starts with a blast of brown sugar and black pepper that morphs into dominant flavors of dark chocolate, oak and cinnamon. Sure, there was a slight balance issue during the second third of one sample due to an aggressive soapy flavor—that thankfully did not stick around very long—but overall, it is clear that Saka has another winner on his hands that is well worth trying if you can track it down.