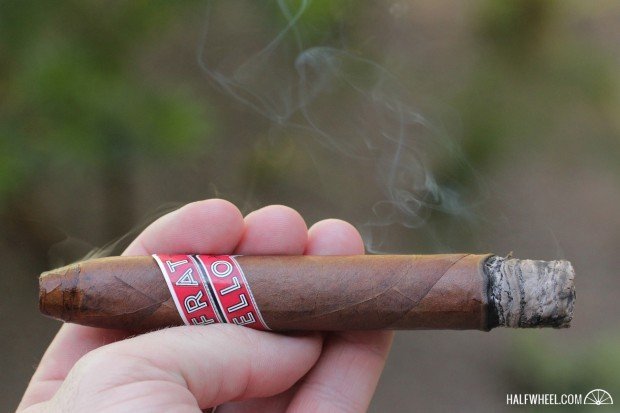 Earlier this year, Omar de Frias of Fratello Cigars announced plans to release the first addition to his debut cigar line since it debuted last fall, an at-the-time unnamed 6 1/4 x 52 box-pressed torpedo. “We are very excited about this new vitola, it has a punch of flavor thanks to its ring style and slightly modified blend but staying true to the Fratello flavor,” said de Frias at the time.

On June 3, the formal details came out: the new vitola would be known as the Fratello Boxer and would make its debut on June 13 at Old Virginia Tobacco Co. in Woodbridge, Va., the store where the cigar was first tested back in January. With its launch, the Boxer becomes the first box-pressed vitola in the Fratello line, as well as the first figurado.

When it was launched at the 2013 IPCPR Convention and Trade Show, Fratello’s debut line contained four vitolas, with the Boxer bringing the number to five:

We considered Fratello for the best new brand of 2013 award and for good reason. Not only was the cigar superior, but Fratello’s business has been equally, if not more impressive. De Frias, who has no background in the cigar business, has placed his cigar in over 100 retailers including an extremely high number of members of the Tobacconists’ Association of America, something uncommon for new retailers.

The Boxer, which is a regular production release, will ship nationally shortly following today’s debut. 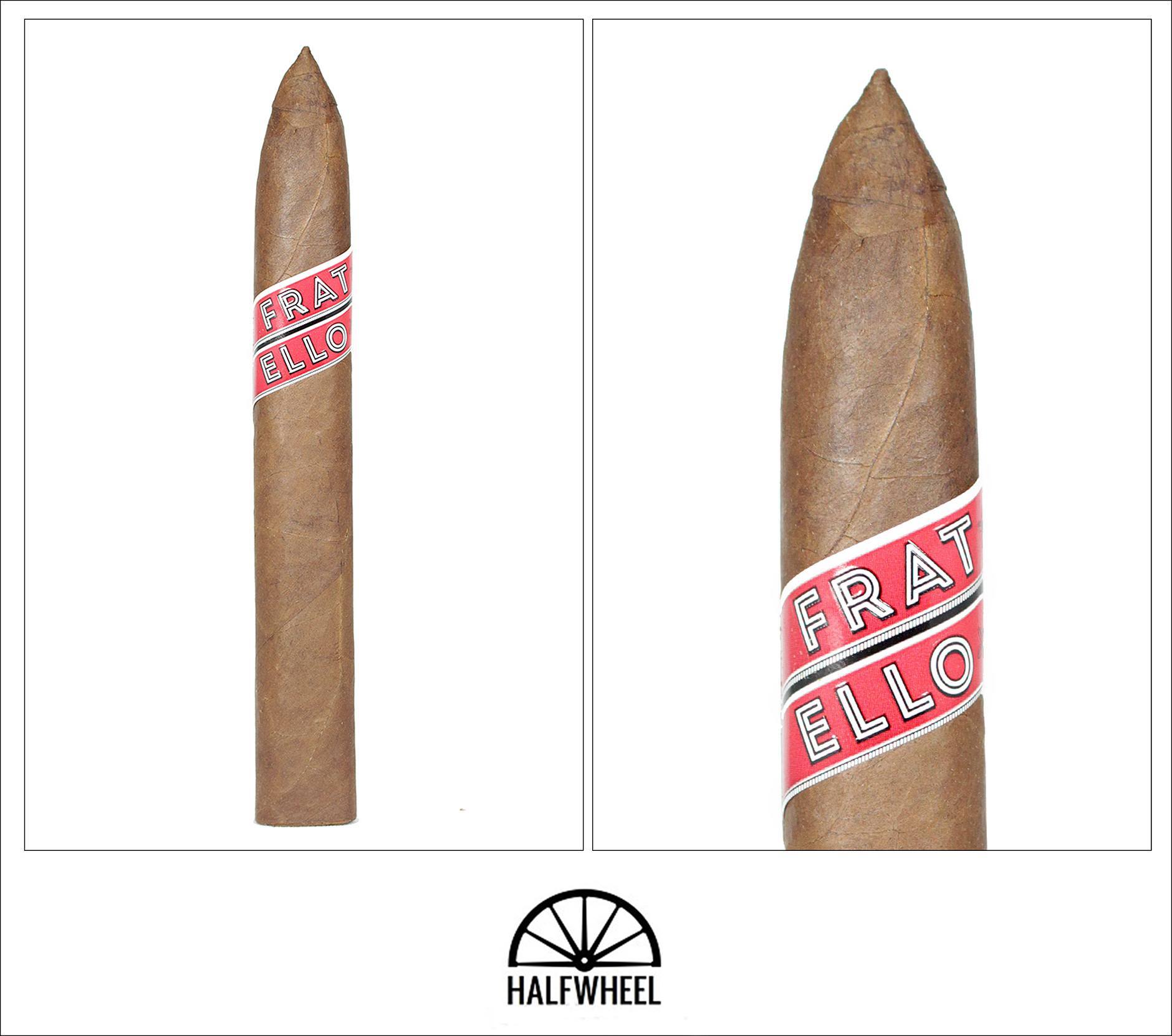 The Fratello Boxer is certainly an attractive specimen and a well-rolled execution of the torpedo vitola. The wrapper is smooth to the touch with a fine velvet texture to it and no prominent veins. There is a bit of variance in the color of the wrapper leaf that is most noticeable along the seams, ranging from raw almond brown at its lightest and picking up an earthier color at its darkest. Construction feels solid as there aren’t any soft spots, with the firmest spot being found right underneath the band. The pre-light aroma is fairly neutral and while very present is a bit of a challenge to pull out specific notes. Dry wood and pretzel are the first two to stand out, with no noticeable sweetness or pepper in the equation. The cold draw is a touch open but not concerning and repeats the fairly neutral notes found on the cold draw but with less distinction and just a touch of pepper lingering in the background. The thin wrapper did struggle with the hot, dry Phoenix air on one occasion, slightly splitting but not enough to affect the performance or flavor of the cigar.

The first puffs of the Fratello Boxer are upfront but certainly not overpowering, and contain a surprising amount of pepper that with the right breeze finds its way into my eyes for a stronger reaction that I was expecting. The pepper isn’t overpowering on the palate or in the nose, but rather a role player that adds character to the cigar without becoming the star of the show, and as such the first retrohale is very pleasing and offers more in the way of enjoyment than challenge. As the burn progresses, there is an interesting development of the flavors that brings in a bit of creaminess to the smoke with a touch of dry peanut in the flavor adding just enough of a savory component to begin a dance of duality in the smoke. White pepper also becomes more a part of the taste with each puff, and subsequent retrohales confirm that with it becoming a touch stronger with each puff. The first clump of ash is tight and layered, holding on well before its first crack appears at an inch or so and it gives way shortly thereafter. Through the first third, the cigar has burned very well with good draw and an even burn line. The flavors mellow just a touch as the first third begins its conclusion and prepares to give way to the second third. 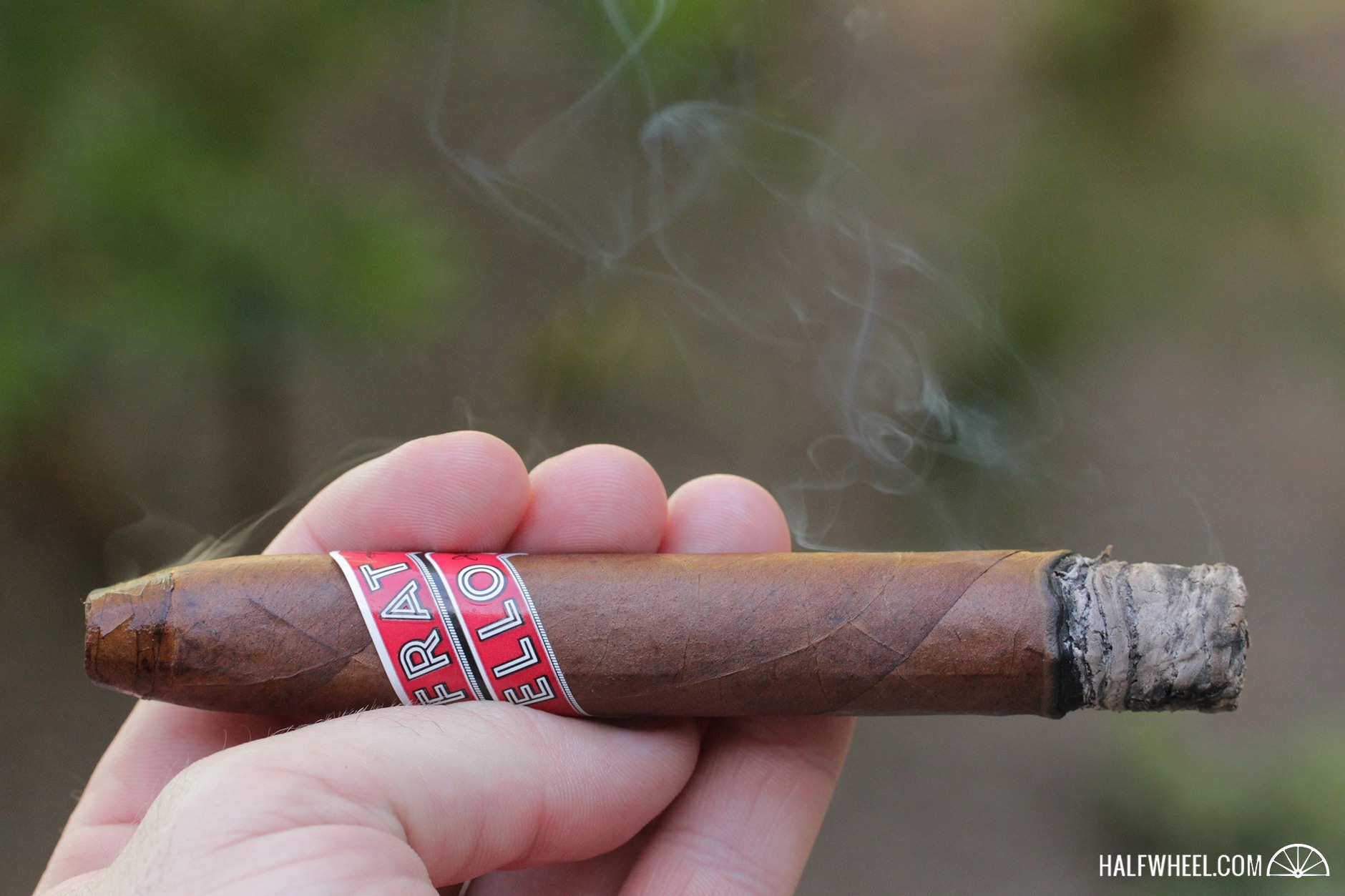 After a momentary retreat from the forefront, the wood and pepper notes begin to reemerge at the start of the second third along with just a bit of tang that has me thinking the Peruvian filler might be getting its first turn in the spotlight. I continue to be impressed by the creaminess of the smoke; it’s not overdone but feels very genuine and balanced, a trait that allows it to carry the other notes well while not blanketing them. The creaminess picks up a touch of a dairy note in the nose on retrohales, reminding me most of sour cream but with a good bit of pepper driven tingle. There is just a bit of sweetness to be found on the palate around the midpoint, providing the most complex interplay of flavors and aromas to this point. Pepper has also reached its strongest level on retrohales though still remains very enjoyable. Before the second third wraps up, the wood picks up a slightly damp note that in turn brings out a bit fuller flavor and softens the dry notes that were found earlier, with the aroma carrying the newly developed note as well. 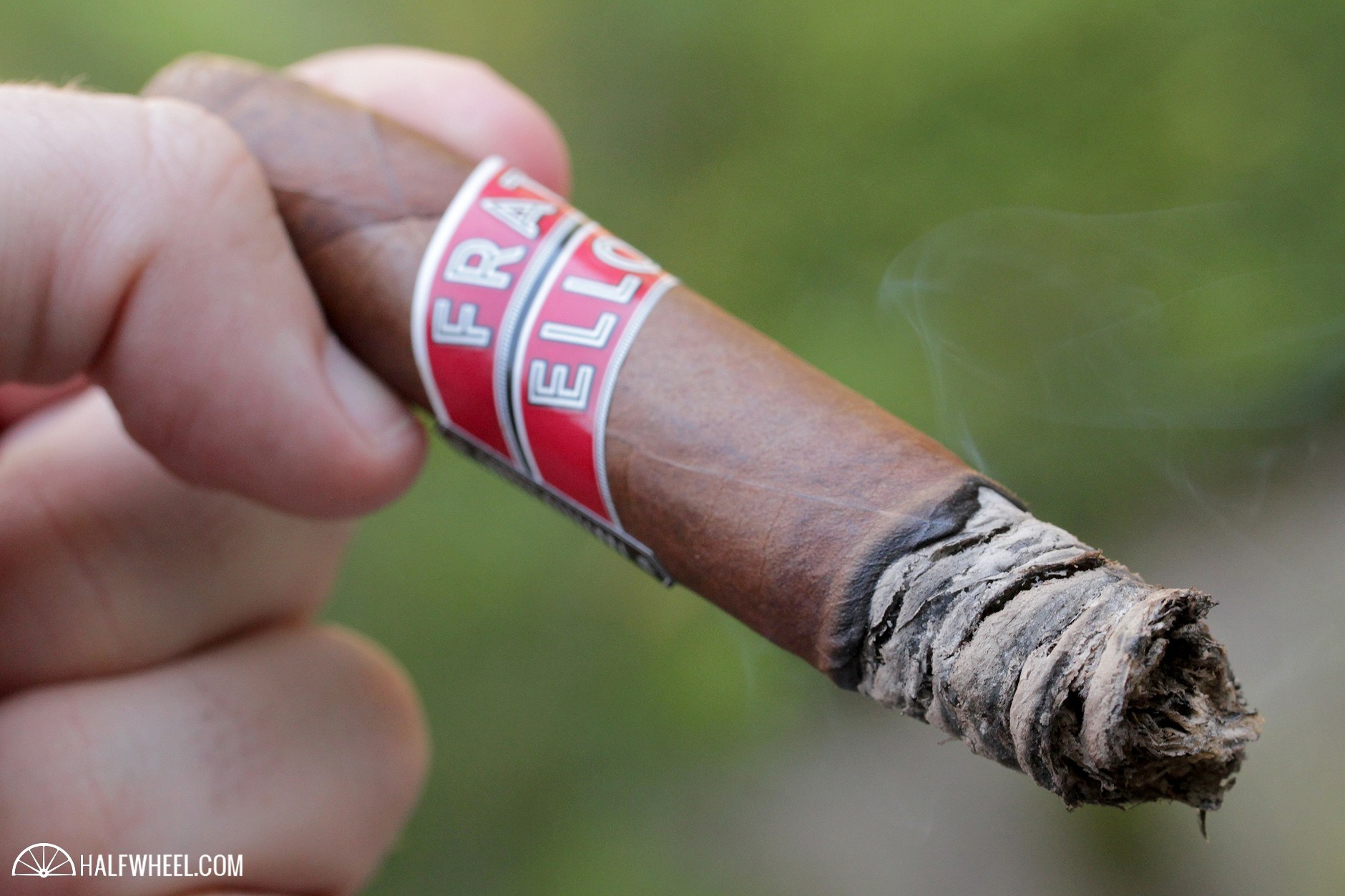 The final third largely stays the course set by the Boxer to this point—creamy smoke with hints of white pepper and wood notes. Retrohales continue to become more pepper-laden and begin approaching the level of being too challenging to enjoy, at least in larger quantities. In the final inches the wood becomes a more rounded flavor and begins encompassing the other flavors as opposed to simply being a component, with that being the most shifting note as it seems to become affected by the proximity of the burning core. A touch of smokiness comes into the aroma in the final two thirds, while the pepper becomes a bit harsher in the mouth, crossing into the back of the throat at points. While the nictoine level has remained at a fairly constant mild-plus level, the flavor becomes more intense and pushes the cigar north of a medium level. The final few puffs are a bit too harsh for my taste, a detour for an otherwise very enjoyable flavor progression. 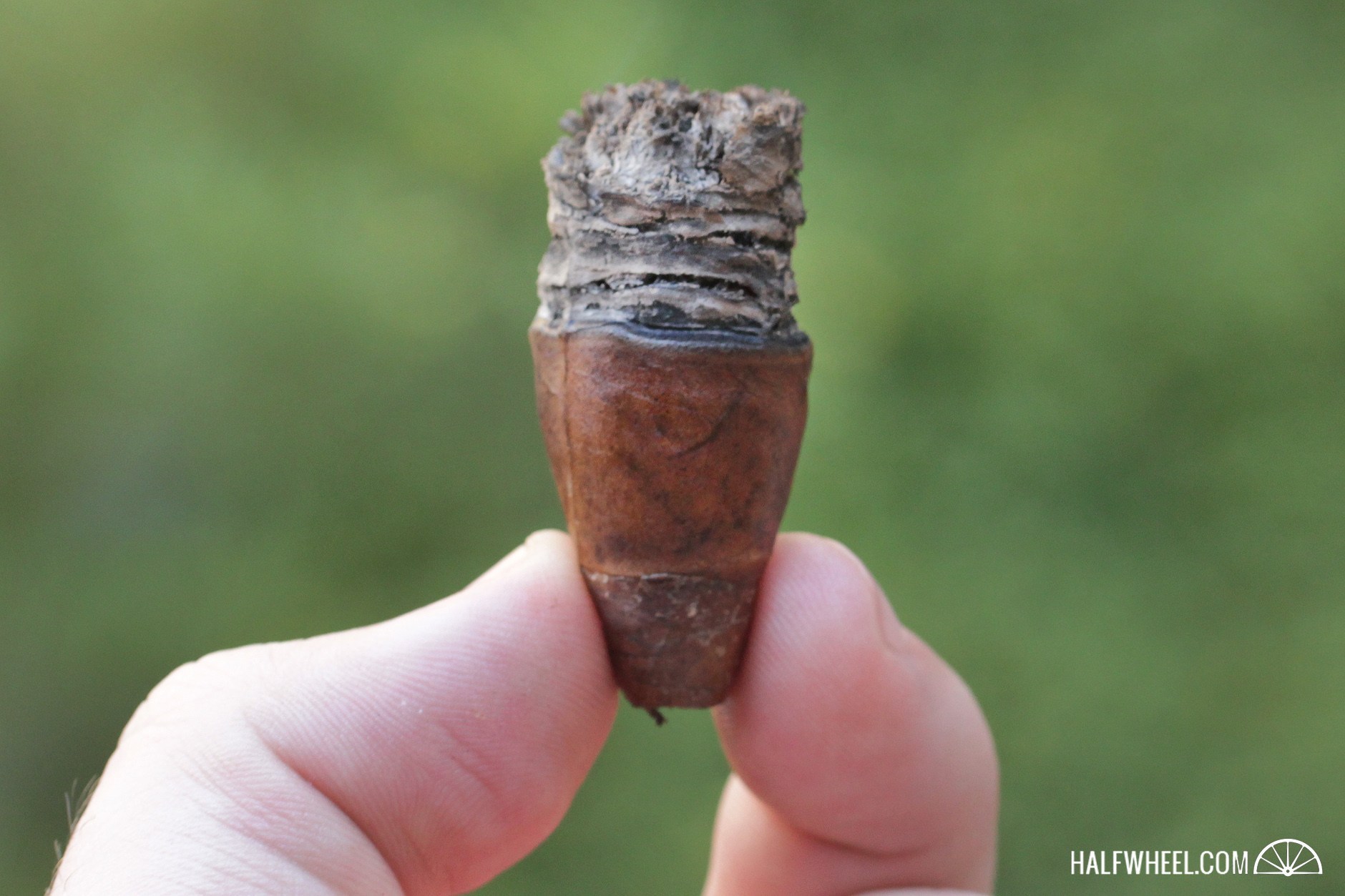 An earlier version of this review mistakenly identified Fratello as having won halfwheel’s Best New Brand of 2013 award. Fratello was nominated for it and seriously considered, but the award ultimately went to Leccia Tobacco Co.
89 Overall Score

The Fratello Boxer shows a bit softer of an expression of the blend than the smaller sizes I have smoked since its debut, and while it's no secret that sub-50 ring gauges tend to be my preference, I am really impressed by how this size presents the blend. Flavors never get muddled or lost, and the added creaminess provides a cushioning backdrop for the rest of the blend to do its thing. It isn't quite as bold as the corona, but that isn't a bad thing and should sit well with those who prefer good flavors from a cigar but with a bit more breathing room. The cigar shines brightest when the creaminess and savory notes come together in the second third, with the first third a well-crafted lead up to that. The final third left the most to be desired for my palate as the wood notes start to shift to a bit harsher spot, and while not a horrible finish, didn't seem to bring the cigar to the conclusion that I thought the first two thirds set it up for. A commendable addition to the Fratello line.