In June 2019, Fratello released a sampler that contained two new blends. At the time, the company said it was hoping to get feedback about the blends to figure which, if any, should become larger releases.

To what should be no surprise, both of those cigars have been added to Fratello’s portfolio. One of them—Sorella—is heading to markets outside of the U.S., while the other, Arlequín, has been released in the U.S., but not before some changes.

The most notable change is that there are now two sizes, neither of which are the same as the cigar that was offered in the sampler.

Also changing is the fact that the cigars are box-pressed, instead of round. Omar de Frias, Fratello’s founder, told halfwheel that he had been thinking about creating a box-pressed torpedo in the blend—a size Fratello refers to as The Boxer in its other blends—and he was impressed by the improvement.

In one of the more staggered releases I can remember, the cigar had four different releases. There was the original sampler release last year, then the two new sizes were shipped to members of CigarClub.com as a soft launch. Bundles of the cigar then went to retailers in early October and later that month, the cigars in boxes finally shipped to stores.

Arlequín—also known as Harlequin—was a comedic servant for the Italian theatre Commedia dell’arte. 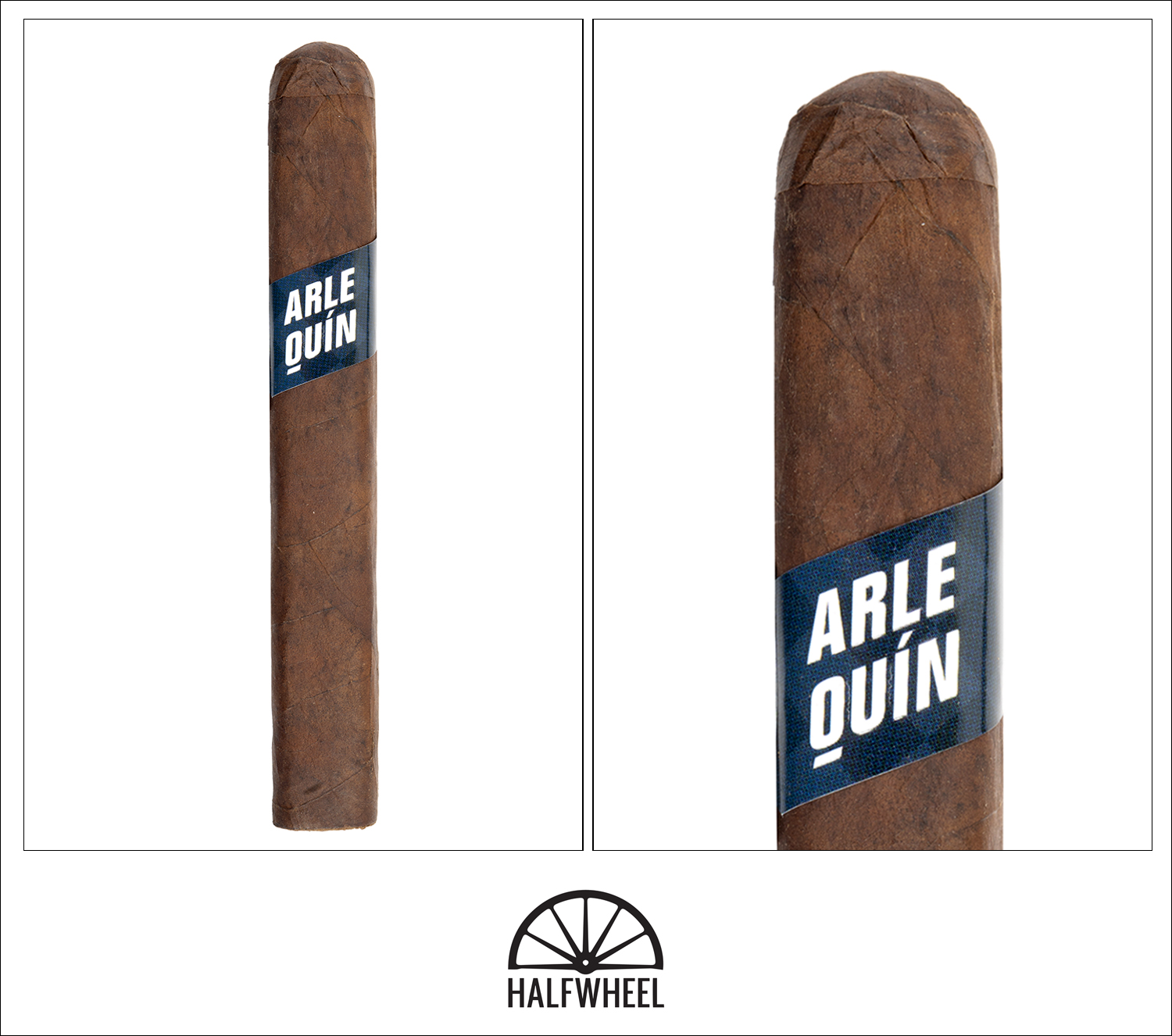 This has a pretty sharp press—making this I believe the third box-pressed cigar I’ve reviewed in a row—and a very dark wrapper. It’s not on the verge of looking purple, but it’s a dark brown with lots of red tints. There are some veins, but they’re pretty hidden in the darkness of the wrapper. The aroma from the wrapper smells like walking into a barbecue restaurant. There’s also something that reminds me of the smell of thick paper I used to use in elementary school art class and a bit of a nori-like flavor. Aroma from the foot is medium-full as well, though it’s dominated by raisin with some of the barbecue smells along with some peppermint. Keeping with the relatively odd sensations, there’s some barbecue flavors, a Chardonnay-like white wine flavor, some mustard and a bit of something that reminds me of processed American cheese. It’s medium-plus, a bit lighter than the aroma would have led me to believe.

The Fratello Arlequín Prensado Toro starts with earthiness, oranges, mustard and nuttiness. Pretty quickly, it becomes apparent this is going to be quite spicy, as it’s dominated by earthiness but there’s both black pepper and spices all around the mouth. One sample offers a bit in the way of creaminess, but even it is drowned out by earthiness. The finish is similar, offering lots of earth with a pretty vibrant black pepper. Retrohales have leather, peanut and lavender—though, the pepper from the mouth remains pretty strong. Flavor is full, body is full and strength is medium-plus. Construction is okay, though I’m forced to touch up each sample a few times and I never feel like I fully correct the problem.

If you don’t like spicy cigars, the transition in between the first third and the second third of the Fratello Arlequin is not going to be enjoyable. This is easily the spiciest Fratello I can remember smoking and to be quite honest, I could do with something else given the lack of complexity beyond the earthiness and spiciness. It’s still led by earthiness—though it’s now got a bit of a soy sauce tint—followed by black pepper, grains, some herbal flavors, earthiness and graham cracker. The finish is more herbal, though still led by earthiness. There’s a weird nutty flavor and some less weird red pepper. Part of why this cigar tastes as spicy as it does is it feels like I’ve coated my lips in cinnamon. Retrohales are very different, led by vanilla over some creaminess and a mild amount of earthiness. It leads to a finish of earthiness along with white pepper and a bit of soy sauce. Flavor is full, body is full and strength is medium-plus. Once again, I keep having to touch up the cigars due to both deceased smoked production and an uneven burn. Things calm down quite a bit in the final third, which is a very welcome change. Flavor-wise, there’s still a lot of earthiness but it’s closer to the other flavors in terms of its intensity. Those flavors include nuttiness, some potato chips, creaminess and lavender. The finish is nutty with earthiness, white pepper and lemon. Retrohales are also much more balanced. Once again, I can’t escape the earthiness, but it’s joined by espresso, creaminess and a very sweet lemon candy flavor. The finish of the retrohale is very bizarre, as there’s some wheat crackers, herbs, earthiness, lemon rinds and pita bread. Flavor is medium-full, body is medium-full and strength is medium-plus. Keeping the Fratello Arlequín Prensado burning remains a challenge, though it seems to be getting easier as the cigar burns down. The Fratello Arlequín Prensado Toro, or at least the ones I smoked, could use some dryboxing. As it stands now, it’s an aggressive profile that provides neither the complexity nor punch that would justify all of its shortcomings. I don’t think it’s permanently going to end up in this place, but it lacks much of what I have found to like in the best of Fratello’s offerings. I think most of Fratello's releases require a bit of concentration to pick up the nuance, yet this is very much a bull in the china shop. This is certainly a cigar that has me intrigued for a redux review at some point in the future.