It’s been some five years since the announcement of the launch of Crowned Heads, and four years since the company’s debut line—Four Kicks—was released. The line drew its name from a Kings of Leon song that company co-founder Jon Huber told halfwheel were “filled with anger, rebellion, confidence, and determination…the feelings that inspired us to forge together and create what would later become Crowned Heads, LLC. 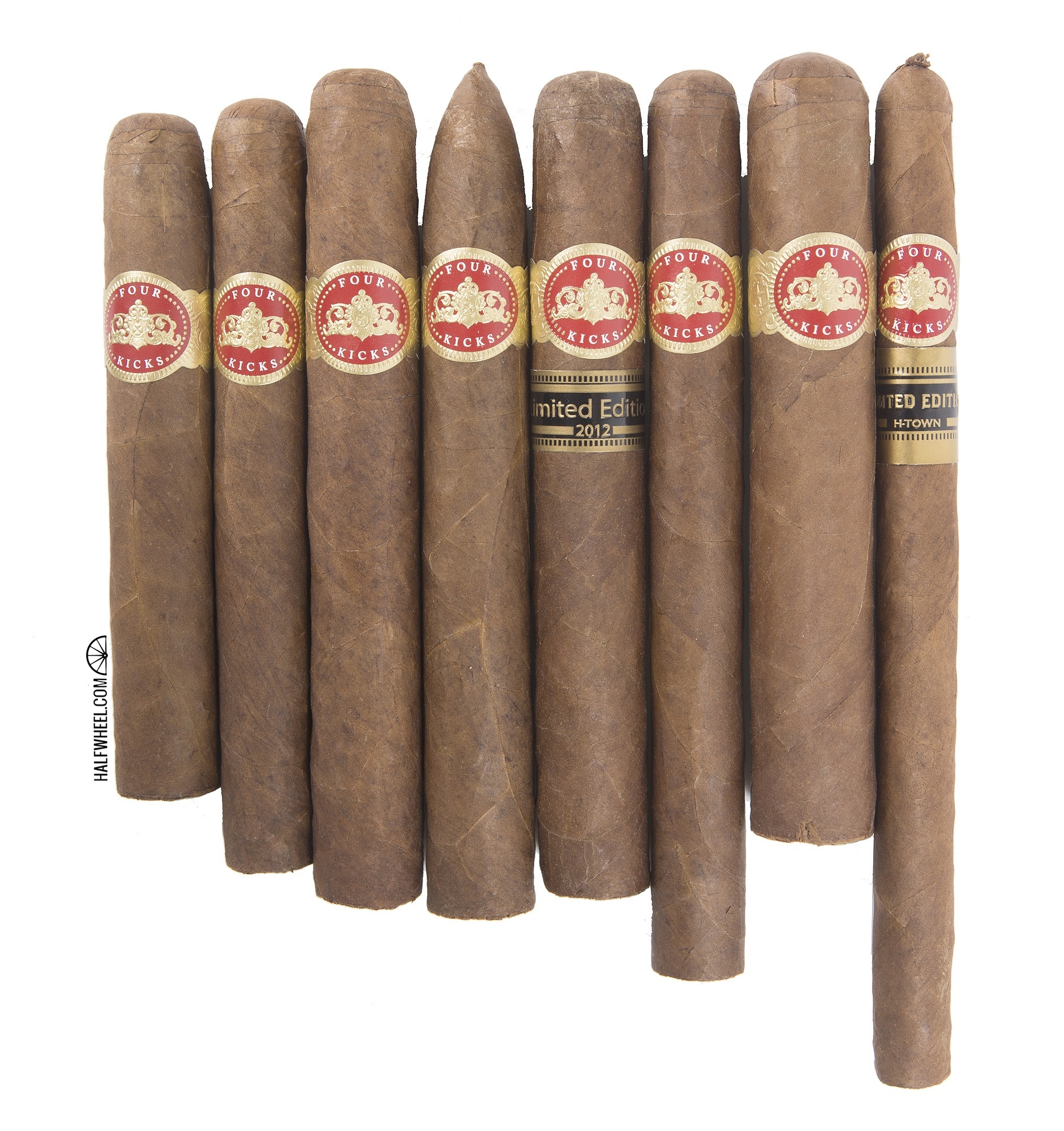 For the seventh vitola in the Four Kicks line, Crowned Heads is releasing a somewhat limited production release as part of the H-Town Lancero Series from STOGIES World Class Cigars in Houston, Texas. 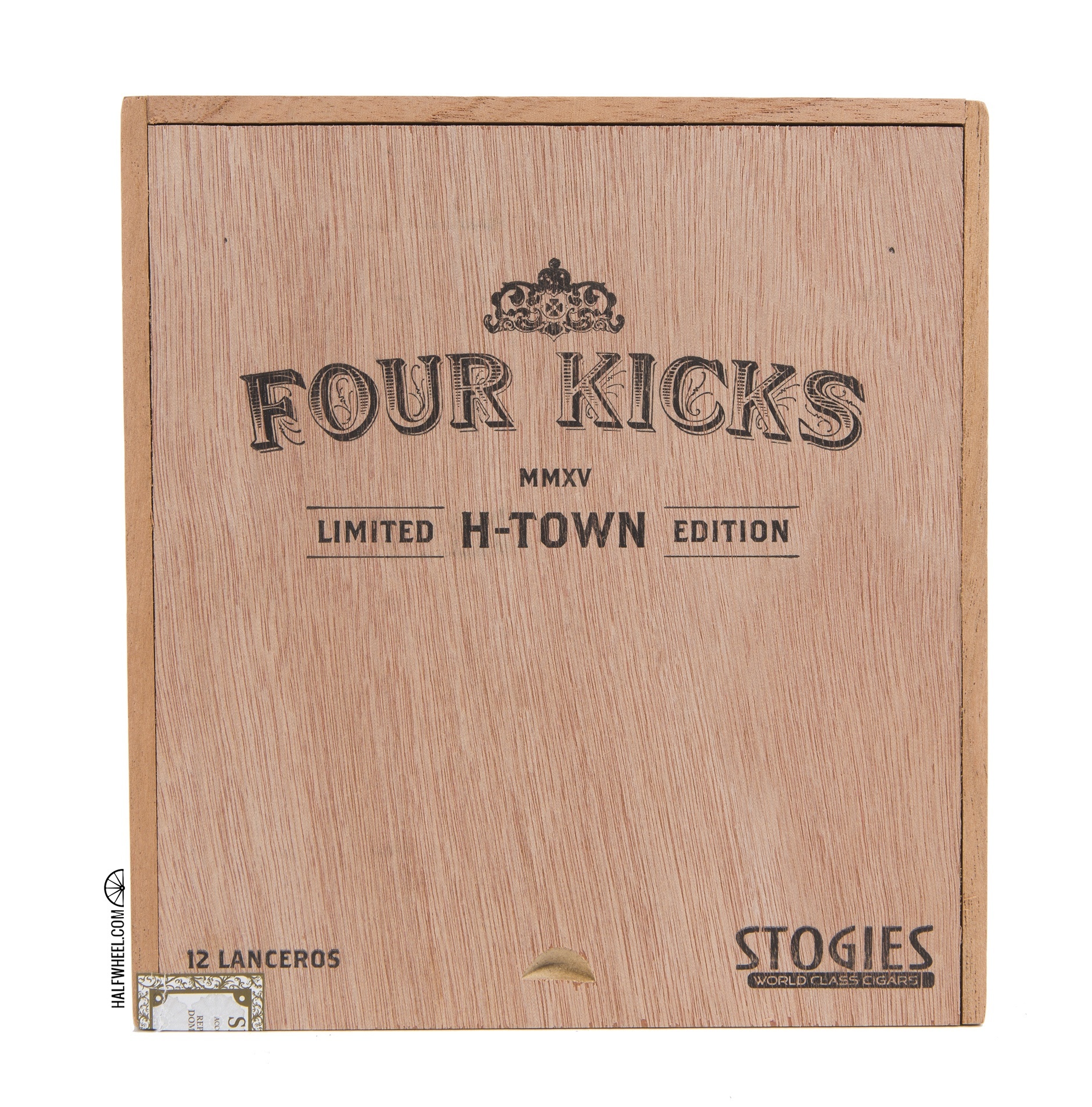 Announced in September, the cigar made its debut at the store’s Big Damn Jamboree & Wingding 2.0 on Saturday, Oct. 25, becoming the seventh release in the line. The long, slender shape of the Four Kicks H-Town Lancero is immediately recognizable and familiar, as is the color of the Ecuadorian habano wrapper: a medium, light cocoa shade of brown with a good number of veins and a matte finish. While it feels a bit light in my hand, I attribute that to the recent slate of larger ring gauge cigars that have been on my agenda lately, and a soft squeeze reveals that the cigar feels well rolled with somewhat varying firmness from sample to sample, but all are far from underfilled. Capping off the cigar is a small pigtail twist, a snippet of tobacco that sticks up from the head and doesn’t really add much to the presentation in my opinion. Smells are sparse from the foot, revealing hardly any clues about what the cigar might offer; I get a bit of neutral wheat bread and a touch of flour, but hardly enough to call it a strong first impression. The cold draw is exactly what I hope from in terms of air flow, while the flavors again live in a fairly neutral place, with a bit of wheat bread, some graham cracker and warm, generic whiskey standing out.

There’s no shortage of flavor in the first puffs of the Four Kicks H-Town Lancero as it starts off with a good amount of pepper that is almost all I can taste before it settles down after several puffs, though much like the other sizes the lancero shows a subtle oak flavor with a bit of leather, both wrapped in a fairly creamy smoke. I also get just a slight twinge of juicy sourness, though it goes away very quick and I’m wondering if it isn’t some byproduct of the pepper. It’s much more subdued that I remember other sizes in the line tasting, and at some points gets too subtle for me to really find engaging. Fortunately, the retrohale remedies that by offering a good amount of bright black pepper that lights up the nostrils quite well. The strength of the ash is fairly typical for what you might expect from a lancero, holding on for about half an inch before unceremoniously falling, while the draw and burn have generally been very good. While the first portion of the second third continues what the cigar offered in the first third, there is a drastic change to the Four Kicks H-Town Lancero just ahead of the midpoint, as the amount of pepper jumps up significantly and retrohales have reached their fullest level yet. Each one delivers a punchy hit of blunt pepper to the nose and gives the cigar some added vibrance, and when the flavor and aroma come together in harmony, the cigar shows off its best characteristics. On the palate, the oak and leather begin to come alive a bit more past the midpoint, with the strength flavor still coming in at the medium level for me, very palatable but not quite as exciting as I might have hoped, saye for a lingering taste of an old fashioned glazed donut, one of my guilty pleasures. One thing that I haven’t really noticed up until the start of the final third of the Four Kicks H-Town Lancero is strength; while the pepper has certainly been a majority player in what the cigar offers, it hasn’t come with much nicotine strength, though that begins to change in this final section. It’s neither overpowering, nor is it even really a firm punch in the chest, but a kick does begin to emerge. Flavor-wise, the final inch and a half easily become my favorite of the cigar—provided I can maintain the self-discipline not to over smoke the thing—as some thick graham cracker sweetness comes in and pairs wonderfully with a bit of coffee and steamed milk; it’s almost like a warm flavored coffee and closes the cigar out on its highest note yet. There can be a bit of a struggle keeping the cigar lit, but overall it finishes off with a straight, even burn and plenty of smoke. After smoking the first two samples, I pretty much had my mind made up about this cigar: decent profile, good size, great construction, worth a try, etc. But then I tried the third sample, and while I don’t know if it was the time of day I smoked it, being in a different state of mind or I just got lucky with a cigar that had just a slightly different profile than the others, I’m inclined to say this is a better cigar than I was going to give it credit for being. The pepper is a huge constant throughout the cigar, but when the oak and leather are turned up just a bit, it’s a drastic improvement in the overall profile. I said it before and I’ll say it again: you have to retrohale this cigar frequently to get everything out of it, and when you do, it’s a darn fine smoke worthy of its place in STOGIES’ H-Town Lancero collection.