There’s no question that Compounds, Elements & Musings got all the attention last year as far as Foundry Tobacco Co. was concerned, but the reality is the company introduced another series, War of Currents.

Foundry, a General Cigar Co. brand headed by Michael Giannini, first came to market in 2012 as an ode to the steampunk movement. Last year, 20 cigars were released under Compounds, Elements & Musings, a play on the periodic table. War of Currents is actually a brand based off of exactly what it sounds like, a war over electrical current standards over 120 years ago.

The battle was fought between alternating current (AC) and direct current (DC). On one side sat Thomas Edison, the proponent of DC, while entrepreneur George Westinghouse and inventor Nikola Tesla supported AC. Ultimately, while direct current is still around in specific uses, alternating current won the war. This infographic gives a concise history of the battle, particularly between Edison and Tesla.

In total, there are six different War of Currents releases. Four are limited and known as the Invention Series. Two of those are based off of Edison (Auburn and Menlo), while the other two—Belgrade and Madison—are based off of Tesla.

The other two cigars are regular production and known as the Laboratories Series. The W. Orange is named after where Edison’s labs were based, West Orange, N.Y., while Shoreham is an ode to the Wardenclyffe Tower designed by Tesla, based in Shoreham, N.Y. 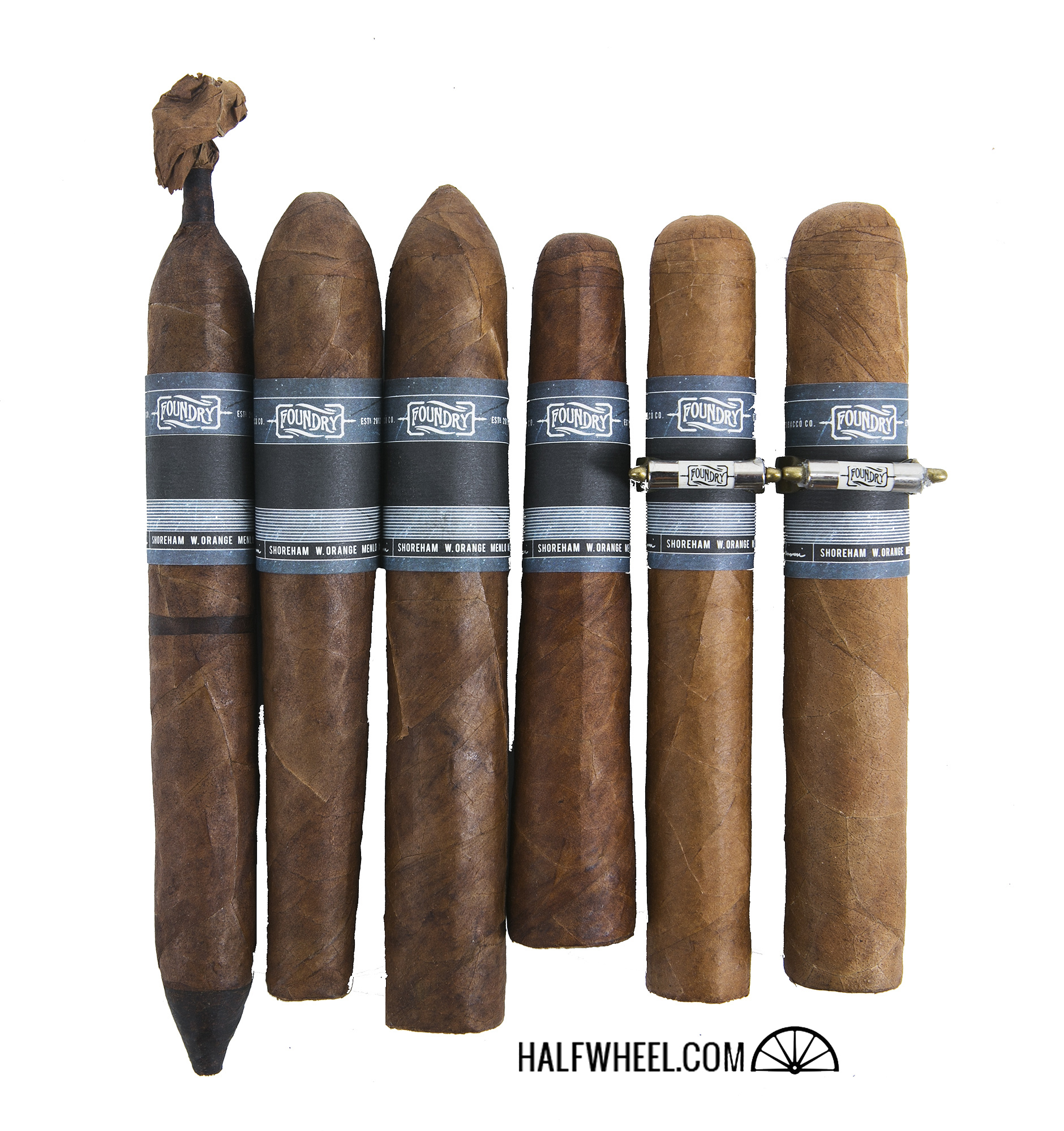 Two of the cigars are regular production, both carry a metal fuse, similar to the gears the 2012 releases of Foundry.

Menlo is a reference to Menlo Park, N.J., the area where Edison’s research lab was based. The boxes are meant to mimic old newspapers, I imagine this being in advertising. The cigars are trompeta-shaped, allegedly made to look like the top half of the phonograph, an Edison invention. There’s some decent red on the wrapper and very visible veins. I can’t help but think that the Menlo would be complemented by a closed foot, although that totally wouldn’t help the look that they are going for. Aroma from the undisclosed wrapper is medium and smooth with some sweet fruit notes. There’s a lot more from the foot: sweetness, nutmeg and coffee; once again very smooth. The cold draw has up front notes that remind me of thicker cut french fries along with some generic woods and the faintest touch of harshness on the back of the throat.

For better or worse, the Menlo does not start out like french fries. Instead there are is bitter burnt earth, hearty cedar and some crisp green licorice notes. I’m able to pick up sweet tea hints through the nose, which is a good reminder it’s been a while since I’ve had some. As the cigar burns, there’s not tons of development from the Foundry, lots of earthy and woody flavors. There’s an occasional bread in the nose, but it’s overwhelmed by a lingering saltiness form the cap, which I assume is actually related to the glue. Harshness decreases in the second third as the earthiness finds some cashew notes replacing the cedar. A bit of grass emerges after the halfway mark, but other than that, there’s little change in flavor. The burn is rarely ever even, but I manage to get away without touching it up. Smoke production is not consistent, but still solid and the draw is slightly tight. 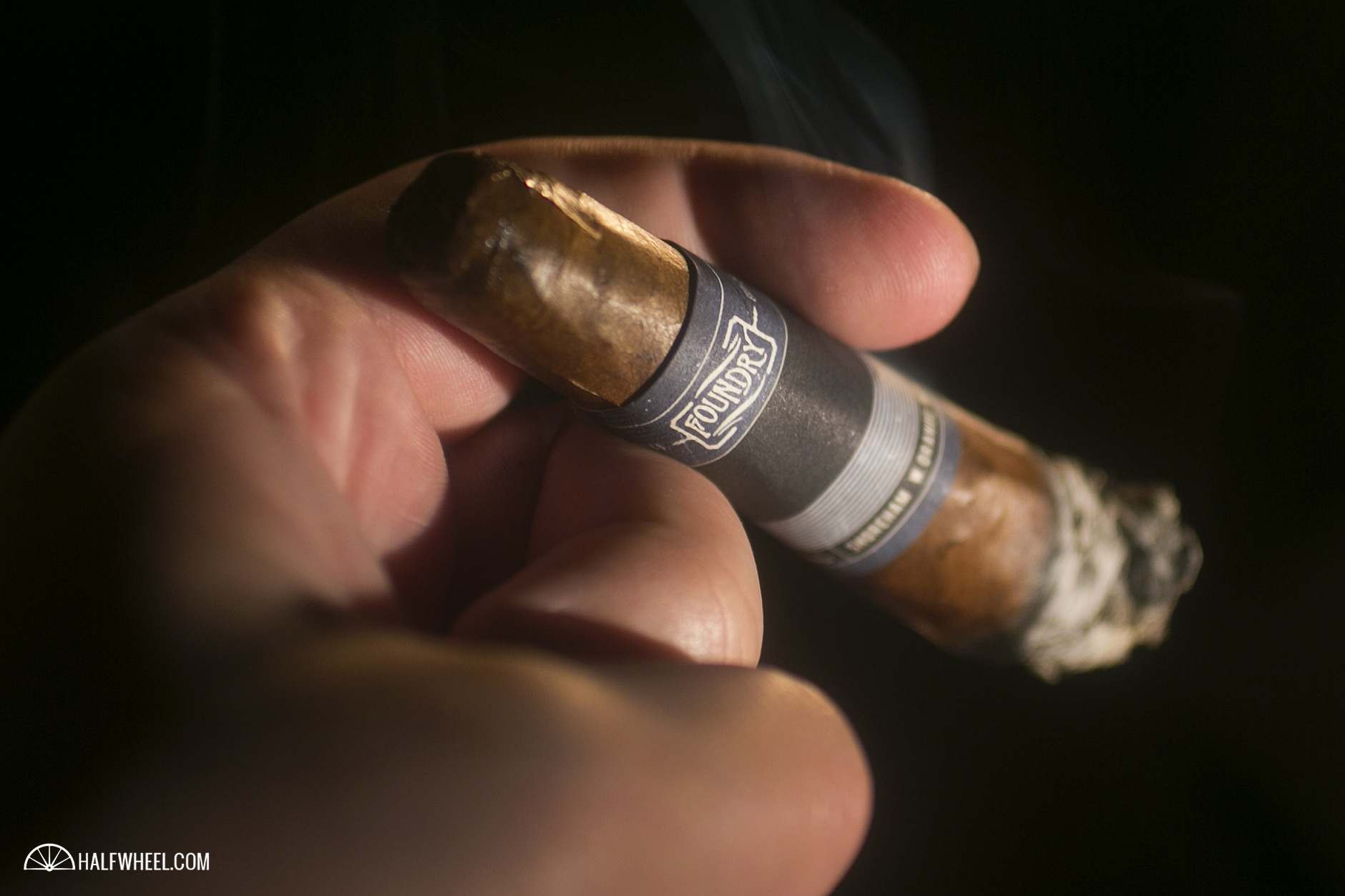 Unfortunately, the harshness and the draw continue to get less appealing with the saltiness being my biggest complaint. A mineral note is developing alongside a slightly bitter cherry. On the finish, I get popcorn, which is a highly enjoyable surprise in a cigar that was relatively predictable. I’m able to smoke past the final inch without the cigar getting too hot, although the draw tightens dramatically. Never a bad cigar, but never a good cigar. I’m somewhat intrigued to smoke some of the other War of Currents, and the price points make it a whole lot easier to do. This is not one that I will be purchasing again, but I wouldn’t be opposed to smoking one again. It’s boring, but still smokable. I really could do without the salt though.