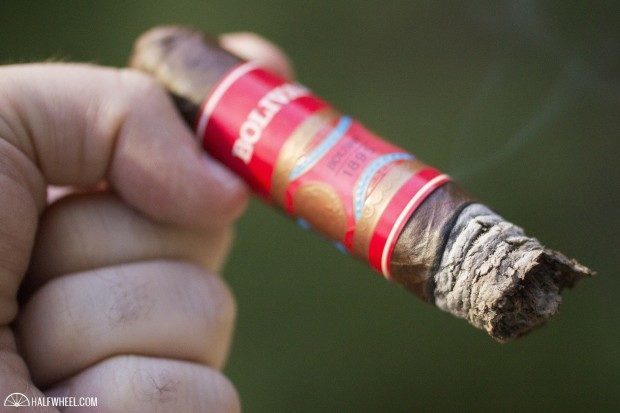 Stepping into General Cigar Co.’s booth at this year’s IPCPR Convention and Trade Show, there was a good bit of mystery would be in the Foundry Tobacco Co. section, the offshoot headed by Michael Giannini and known for releasing literally dozens of small batch, limited edition and limited production cigars in the past few years.

But this year was different; instead of taking cigar smokers to other planets as he did last year, Giannini took them back in time to revisit a pair of lines in the General portfolio that had fallen out of the limelight in recent years, Bolivar and Ramon Allones.

Both were getting the Foundry treatment, as he put it; time travel in a different way, using heritage brands with a reimagined presentation that attempts to be more modern while still keeping a look that references each brands’ storied past.

For Bolivar, the brand traces its roots back to 1901 or 1902 in what is believed to be Great Britain and José Fernández Rocha. The mark did not get registered in Cuba until 1921 by Rocha via his company, J.F. Rocha y Cia. The company became known for producing what was considered the world’s smallest cigar, the Delgado, which measured 1 7/8 inches long with a 20 ring gauge.

Following his death in 1954, the Bolívar and La Gloria Cubana marcas were sold by his family to the Cifuentes family, which led to a move to the Partagás factory. Following the Cuban revolution and subsequent nationalization of the tobacco industry, the Cifuentes family left Cuba and in 1978, Ramón Cifuentes licensed the brand to General Cigar Co. and a new cigar was created, with cigars much milder than their Cuban counterparts. In 2005, the brand underwent an overhaul and the blend was made much stronger, using a Honduran San Agustin ligero wrapper, Connecticut havano medio tiempo binder and fillers from the Dominican Republic and Nicaragua’s Estelí and Ometepe regions.

Now 10 years later, the brand gets another reboot, both in terms of blend and presentation.  The wrapper comes from a project of growing habano seed in Connecticut that General has been working on for several years, while the binder gets an Ecuadorian Sumatra and a filler of tobacco from four countries. 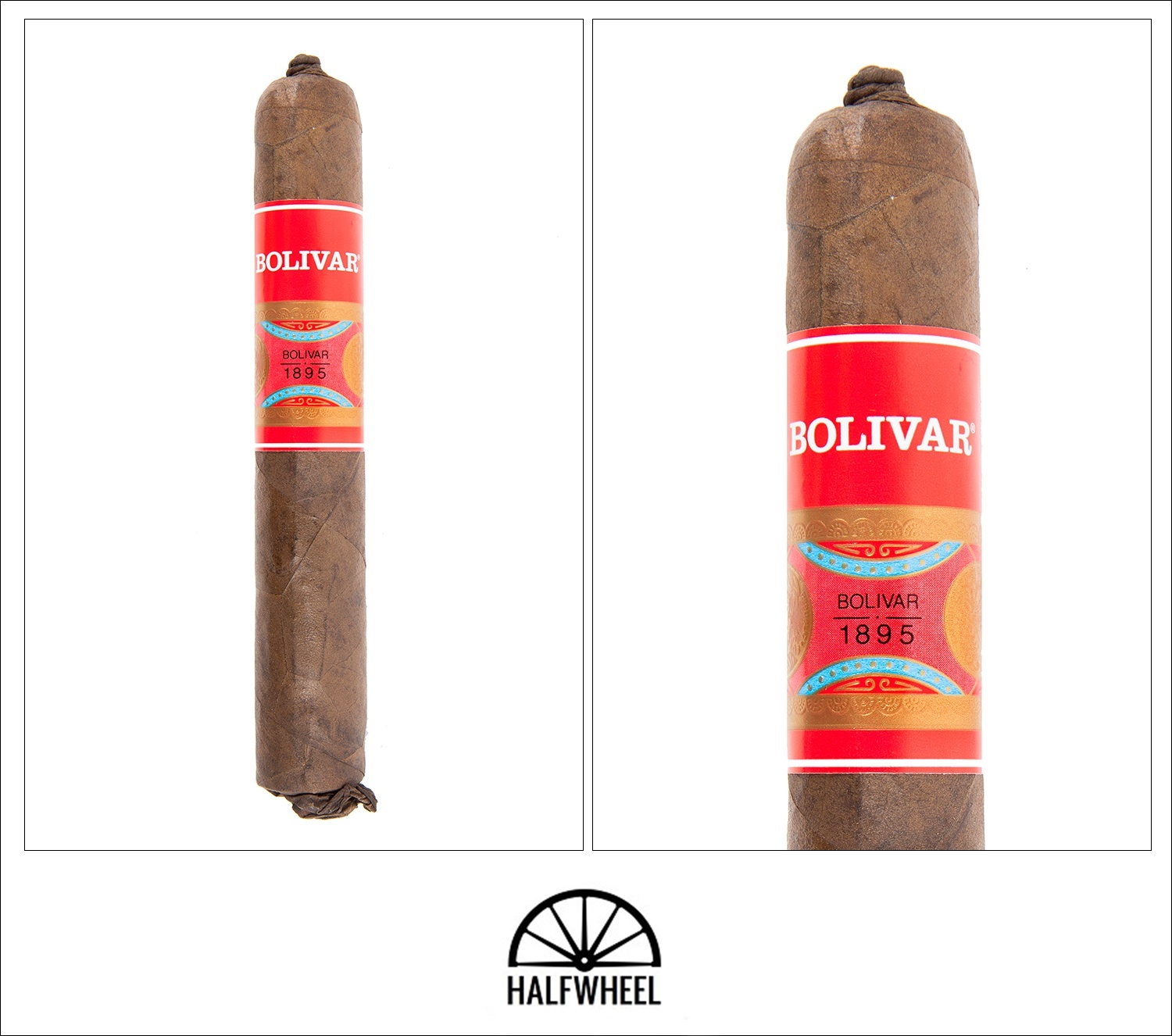 It’s been a while since I’ve seen as much shine on a wrapper as the Bolivar has; rich and dark with a significant amount of oily sheen. It’s also a fairly smooth cigar, with a couple of small, smooth veins and a bit of an oily feel on the fingers. The covered foot is given plenty of extra tobacco, with one of the two cigars I smoked showing quite a bit extra. On the other end is a prominent bun cap, tightly wound and expertly constructed. Between the two ends, the cigar is firm but not hard, with just a small soft spot underneath the band. I’m a bit surprised by how little I pick up from the foot of the cigar; other than a fairly common sweet tobacco smell the Bolivar doesn’t seem to be offering much else, other than what the mind interprets the sweetness as; I get a bit of grassiness from the second sample, a slightly different introduction than what I got from the first sample. Even with the covered foot, the cold draw is open enough to get sufficient airflow, and shows a complex, broth like mix of flavors, with woods, earth, a bit of root beer and a subtle hint of pepper.

There’s no shortage of flavor in the first few puffs, as pretty much everything I picked up on the cold draw has come alive as smoke billows out of the Bolivar. There’s a bit of pepper in the background, but what stands out most is a bit of damp wood and tanginess that I can’t quite decide if I like or not, though I generally lean towards the former. It stands out the most both on the initial draw and on the lingering flavor, with the latter picking up a chalky note as well as it sits on the tongue for easily 45 seconds if not a minute. Retrohales are where the pepper is first found in any sort of substantive quantities, and once found in the nose it reveals itself to the tongue as well. Thankfully that hard-to-identify flavor moves along and a slight cocoa note takes it place, adding a sweetness that helps balance the flavor while making it even a bit more complex. The Bolivar isn’t the fastest burning cigar, either, as it takes a good 40 minutes for the first clump of ash to break off at just over an inch long. At that point the cocoa stays prominent but there’s also just a touch of blackberry that queues the cigar up for the next third. 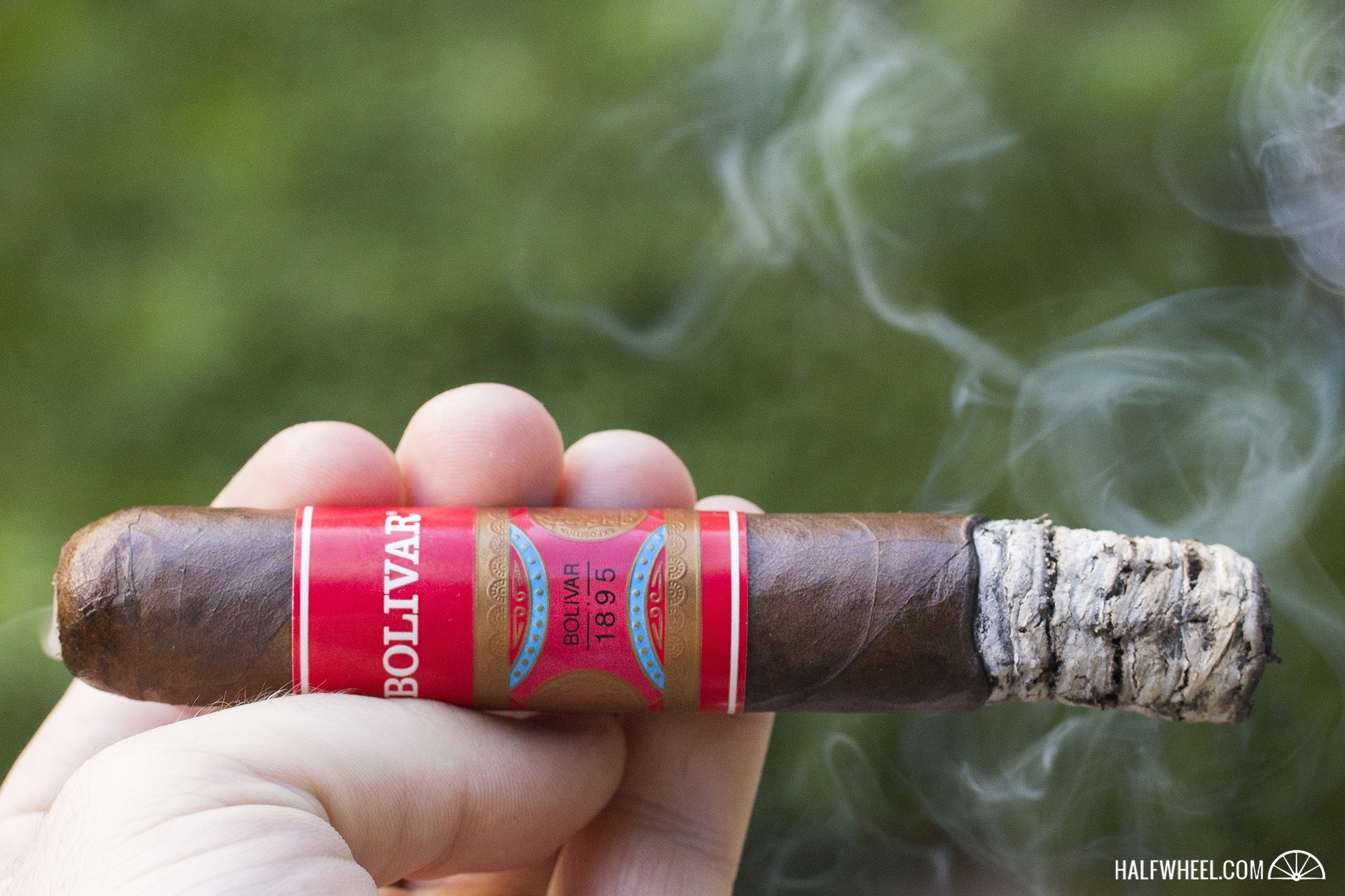 The sweetness proves to be more of a bridge than a building block of the Bolivar’s flavor profile, as shortly after the second third commences it falls away and the cigar picks up a bit more pepper and earth, by no means a heavy flavor but certainly a shift towards being fuller bodied that where it had been in recent minutes. Just ahead of the midpoint, the flavor transitions almost stop and the cigar finds a home in being medium-bodied with the occasional leaning towards medium-plus, with a base flavor of chocolate, earth and a bit of pepper, all well balanced and clean on the palate. The burn line has remained incredibly sharp and even with the ash repeating its first performance of holding on for an inch or so before breaking off. The final few puffs of this section see the Bolivar begin yet another shift in flavor, as the earth note becomes a bit drier and bolder, the pepper has less cushioning, and the overall profile takes a robust step towards being full bodied. 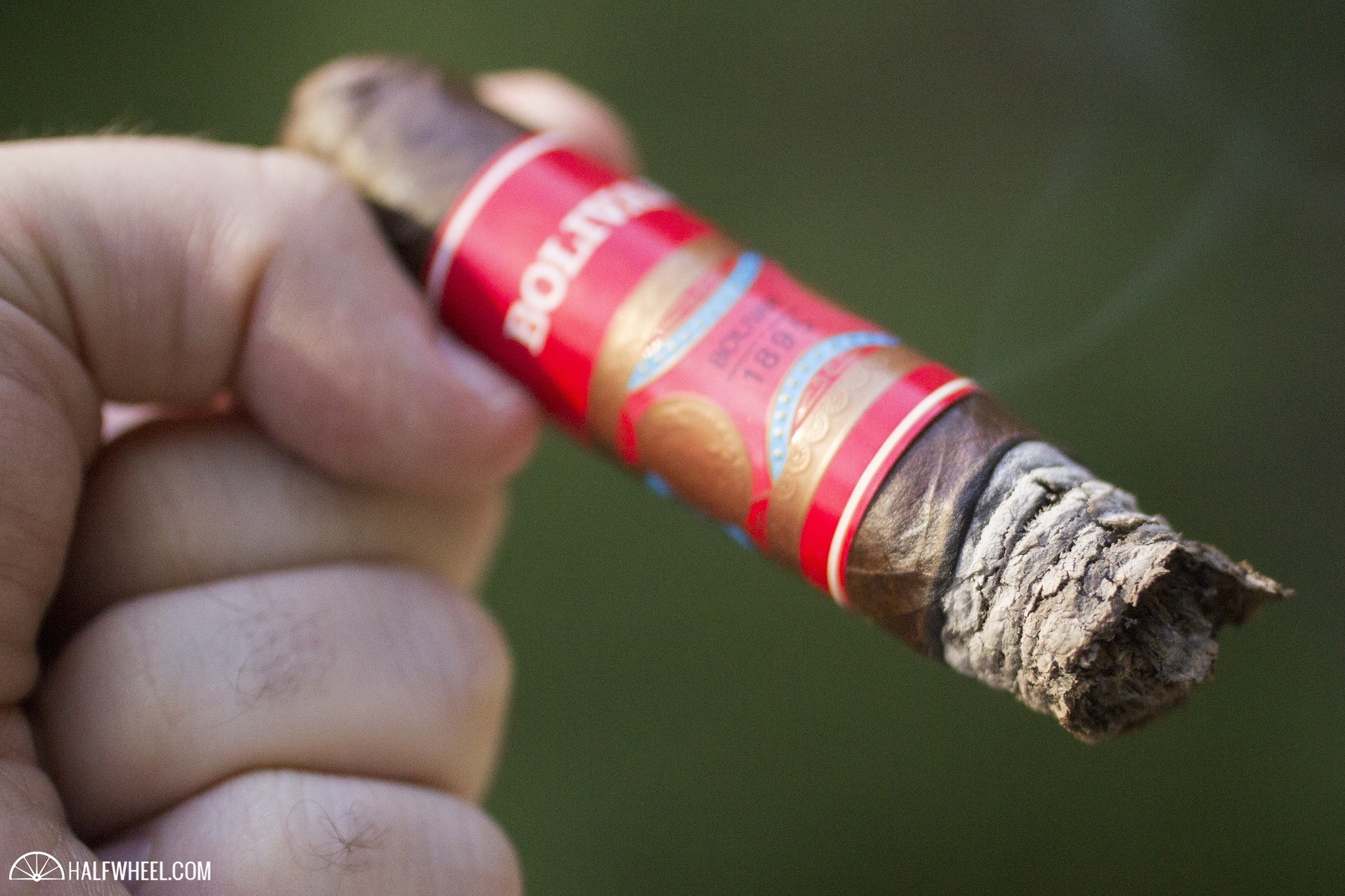 At the start of the final third, the Bolivar becomes brighter and punchier as the flavors wake up and become much more vibrant than they were for the bulk of the second third. The pepper is the most noticeable, but the backing notes are equally as engaging, with the sweetness the only thing missing from the otherwise enjoyable profile. While the draw opens up a bit to become a bit loose for my liking, the burn line remains even, and provided the fairly new found flavor profile isn’t too much for your palate, the cigar can be smoked down to a tiny nub of it former big and beefy state. 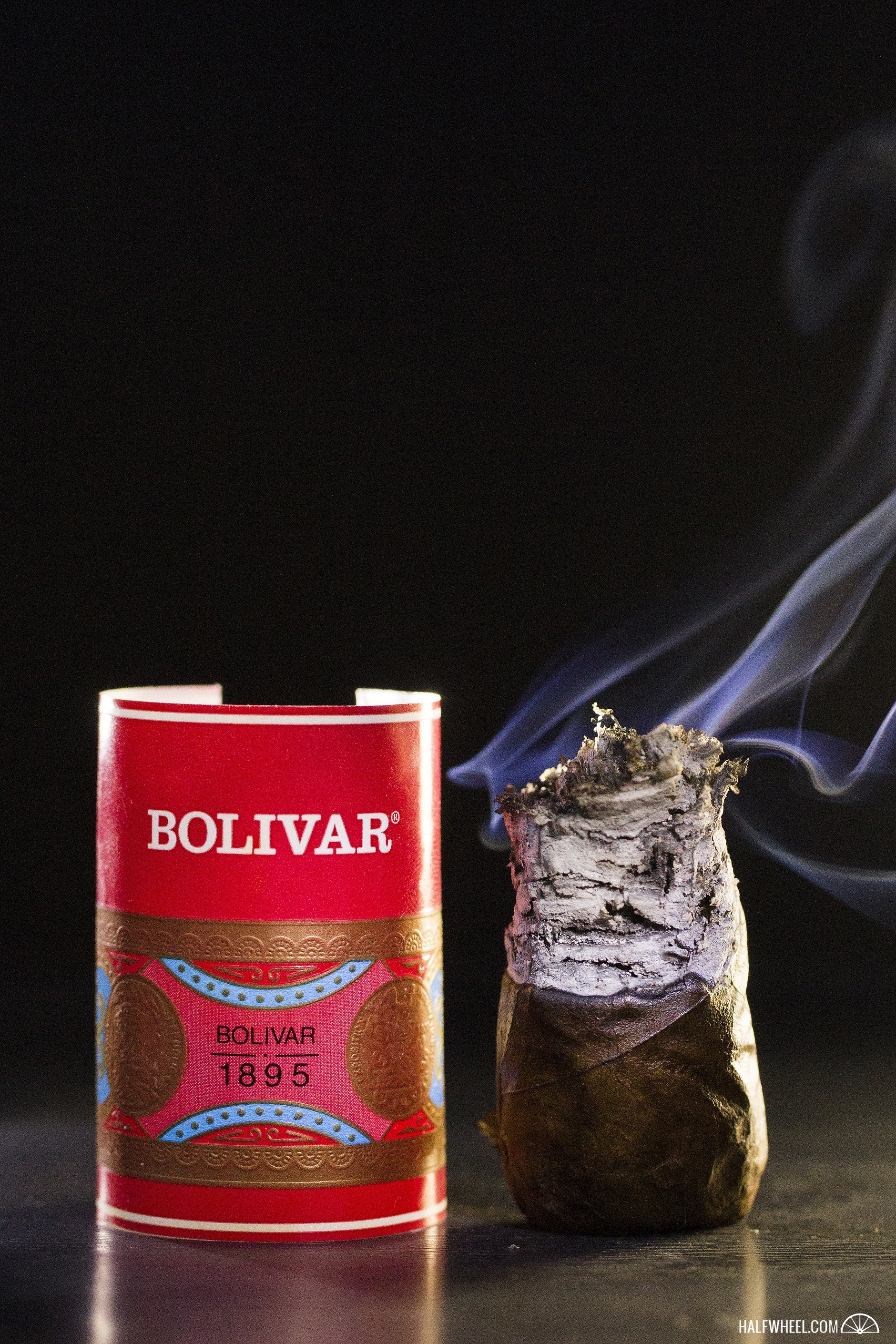 There will be few cigars that compare to a well-blended, properly-aged Cuban Bolívar Belicoso Fino when it comes to my favorite cigar memories, and I certainly don’t know if General Cigar Co.’s Bolivar is even trying to do that. I will also say that I never smoked many of the previous Bolivar release from General, so I don’t have much to compare this cigar to from that blend. But on its own, this newly revamped Bolivar is a pretty solid blend: flavorful and complex with fairly good balance and above average construction, even in its largest ring gauge. Hopefully this helps bring the non-Cuban Bolivar into a bit more prominence, something this heritage brand certainly deserves.