As has been mentioned earlier, Melillo’s first new cigar will not use any broadleaf, instead it’s a Nicaraguan puro using a corojo 99 wrapper from Finca Puntalito in Jalapa and a corojo 99 binder from Finca San Jose in Jalapa. In the filler, there’s a mixture of corojo and criollo fillers from Estelí and Jalapa. Melillo is having Tabacos Valle de Jalapa S.A. (TABSA) produce El Güegüense, and the tobacco is coming from AGANORSA.

“We are aging these cigars in cedar before shipping them out for the market,” said Melillo in a press release. “Overall I would say El Güegüense is an elegant full flavored cigar.” 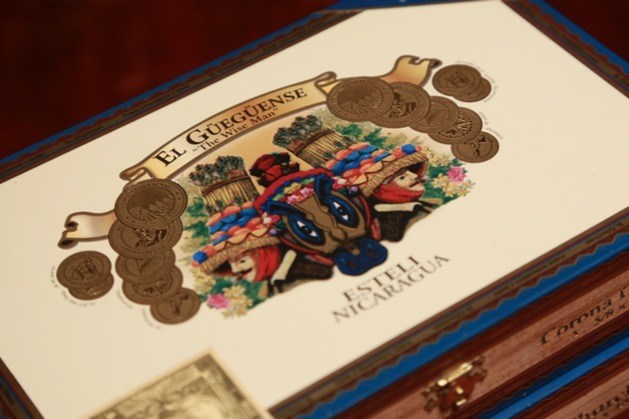 “This brand is all about Nicaragua and my love of Nicaragua,” said Melillo. “Yes, this is a new cigar but this brand is over a decade of walking the factory floor and breathing tobacco as my life. This is twelve years of being with the people in Esteli, building relationships and getting to know friends and their families. I really want this brand to show my passion and love for a country that has become my home.”

El Güegüense is the main character of a Nicaraguan folk dance that is performed annually during the country’s San Sebastián festival in Diriamba. El Güegüense—which translates into the wise man from the Aztec language, Nahuatl—is blamed by a Spanish governor for continuing to dance after orders were given to stop dancing. El Güegüense plays a series of tricks on the governor and the sheriff, and eventually marries the governor’s daughter. Melillo said he considered simply calling the cigar the wise man, a name he also trademarked, but didn’t like how the packaging felt. Each box will contain a card stock with a drawing of El Güegüense and Melillo will have 16 masks on display at next week’s IPCPR Trade Show & Convention from the Nicaraguan artists, La Familia Florez.

While Melillo and David Sather will handle the sale of the cigars through Foundation Cigar Co., Dion Giolito’s Illusione will be assisting Foundation in fulfillment. Melillo made it clear that Giolito and his independent sales brokers would not be selling the product. Giolito declined to comment.

Foundation is scheduled to have its own fulfillment operation live sometime in 2016.