It seems that over recent times I’ve been seeing a growing number of athletes and entertainers dubbing themselves with a moniker that incorporates their area code. The rapper Pitbull staked a claim to “Mr. 305” before becoming “Mr. Worldwide,” while during MLB’s Players Weekend in 2017, Yonder Alonso sported Mr. 305 on his jersey. Area codes frequently get incorporated into chains, customized shoes and other items.

Which got me thinking about something when I picked up the Flor del Valle Seleccion del Valle: why hasn’t anyone in the cigar industry dubbed themselves “Mr. 109” yet?

Maybe not the greatest idea, but the name would be a nod to the 109-style head, known for its slight taper that sits between a traditional head and the pointed belicoso style. It’s been used by a number of manufacturers on a small but decent number of cigars, and it is what graces this release from Warped, a 6 x 52 vitola that was released at the 2019 IPCPR Convention & Trade Show.

As with the rest of the Flor del Valle line, which debuted in 2014 and means flower of the valley, it is a Nicaraguan puro with a corojo 99 wrapper grown in Jalapa, a dual binder of Nicaraguan corojo 99 and criollo 98, and fillers from Nicaragua.

It was the first cigar from Warped that wasn’t made at El Titan de Bronze in Miami, instead being made at Tabacos Valle de Jalapa S.A., the AGANORSA Leaf factory in Estelí, Nicaragua. It debuted in two sizes, though Gellis said three more were on the board.

The Sky Flower, which came out in 2015, features a slightly tweaked blend, adding some medio tiempo to the filler to increase the strength of the cigar. As noted above, there was also a store exclusive size produced for Corona Cigar Co. in Orlando, Fla. 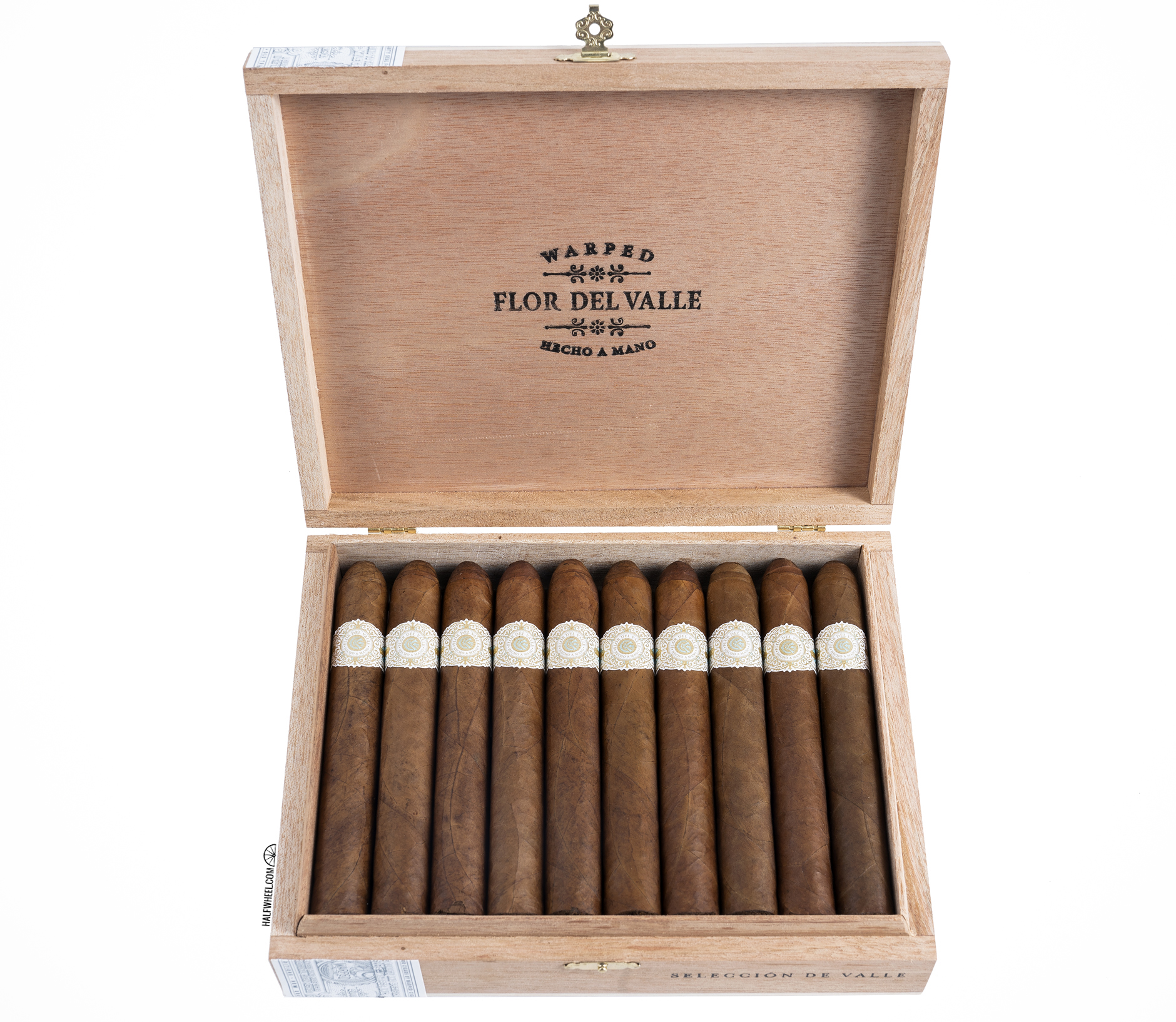 This cigar was initially known as the Flor del Valle Ghost Orchid, though due to a trademark issue—quite possibly with Gurkha, which has a trademark on the word Ghost—the name was changed to Seleccion del Valle, or selection of the valley. 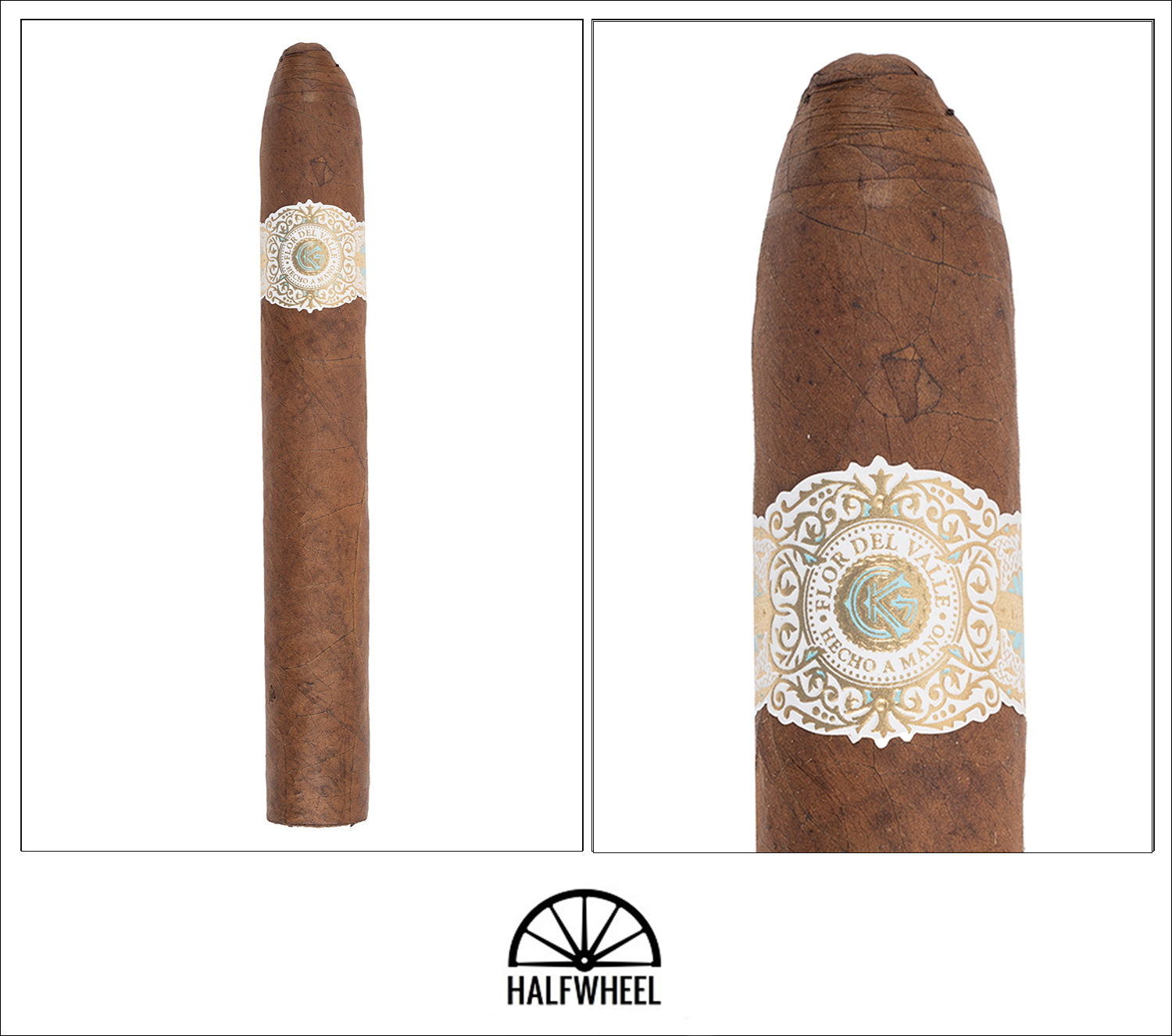 Cigar geeks will almost certainly gravitate towards the 109-style head of the Flor del Valle Seleccion del Valle; it’s one of those things that really shouldn’t be that big of a deal, but its relative rarity makes it noticeable, even though it will get cut off momentarily. Moving down from that, the first sample has a vein structure that almost perfectly reveals how a tobacco plant channels the nutrients from the ground, as it’s easy to see a network of smaller veins feeding off a more prominent one that was inevitably connected to the central vein. There can be just enough variance in the wrapper’s well-tanned hue to see the seams of the wrapper and the curving  angles of the leaf. It’s a firm, well-rolled cigar, and the head is assembled quite well. Aroma off the foot of the cigar reminds of putting my nose into a freshly opened package of Cheerios with the cereal note standing out quite distinctively.  From there, the flavor diverges into white bread and black pepper, pulling in opposite directions but still working well together, and in some cases quickly redirecting me from that initial impression. The cold draw had a Goldilocks effect; the first was a bit loose, the second near ideal and the third was a tight. Each had more of the cereal note to be found and while there is some sweetness there is little to no pepper. If anything, the flavor goes towards cashews and a bit of lumber.

Thoughts about the Flor del Valle Seleccion del Valle based on the first puffs get quickly dashed my initial retrohale, which is big and bright with a white pepper that owns about 75 percent of the sensation, leaving the rest to a lighter black pepper and some gravelly rockiness. As the first clump drops, I get what I think is an oatmeal flavor, though it has been long enough since I’ve had the food that I’m not 100 percent sure that is actually what I’m tasting. From there, the cigar’s pepper quotient builds and declines every few puffs, with the profile somewhere in the medium to medium-plus category as far as flavor intensity, while strength is medium. The first third wraps up with a bit less of the gravelly rockiness in the nose, while the palate gets a much creamier smoke, reminiscent of condensed milk at times. The draw, burn and smoke production are all quite good and completely problem-free so far.

The second third of the Flor del Valle Seleccion del Valle gets toasty fairly quickly, a flavor that wants to lean into a bit of charred wood at times but stops short of going all-in on that, instead pivoting to a bit of dry, rocky earth. There are a few points where the profile reminds me a bit of the vine notes of an earthy Syrah, though it’s just that one specific characteristic that comes out as the cigar has very little sweetness as it approaches the halfway mark. The midpoint sees a mellowing of the flavors, though there is still a mix of toast and creaminess, the latter a bit thinner and not as sweet as earlier. Retrohales begin to wake back up not long after with a mix of black and white pepper that stimulates the olfactory nerves to the point where only one or two passes of smoke is enough at a time. The flavor intensity still sits around medium to medium-plus, while strength is a bit less than that but still in the medium range. While there isn’t much of a big change at the start of the final third of the Flor del Valle Seleccion del Valle, the further the burn line progresses, the more the cigar begins to turn away from its otherwise enjoyable profile that was present in the first two thirds. The final third sees a pointed sharpness enter into the flavor, and since there’s not really a flavor to be found to go along with it, it’s almost more physical sensation than anything for the taste buds to enjoy. The cigar is rockier and sharper on the palate, but not because of pepper, earth or any other familiar flavor, and as such increasingly grates on the back of the throat. It’s not a completely unpleasant experience as some puffs shed almost all the harshness in favor of thick wheat bread flavors that are chewy and have a sprinkling of pepper. The first two thirds of the Flor del Valle Seleccion del Valle had me interested if not enamored with the profile of this latest size. Sadly, all it took was a few puffs of the final third to have me alternating my gaze between the burn line and the ashtray while my attention was summoned to the growing irritation in the back of my mouth and throat. I'd certainly take those first two thirds over and over again without issue, though the finish needs to get a good bit better before this could be considered a complete cigar that is truly enjoyable from start to finish. There's always hope that time may solve some of the issues, but for now, this is one to smoke aware of the fact that just as you have settled in with it, it might up and turn on you.