I can’t say that I remember where I was when most cigars debuted, but there is one memory I distinctly remember. It was March 2012 at the Federal Cigar 91st anniversary and it was the first time the Flor de las Antillas was being handed out for sampling amongst U.S. consumers.

There’s no way that anyone in the room that Friday night could have imagined the success the cigar would go on to have. It’s not because the cigar wasn’t good, but it certainly wasn’t the earth shattering cigar one would think would be needed to win Cigar Aficionado’s cigar of the year.

Shortly after winning that award less than year later, My Father ramped up the amount of sizes it produced under the Flor de las Antillas line, which now includes 12 releases for the regular line and now two maduro cigars, both of which have been exclusive releases for New Hampshire-based Federal Cigar.

That maduro debuted last year at another Federal Cigar anniversary event, this time the store’s 94th. It was offered in a Petit Robusto size of 4 1/2 x 50, limited to just 100 boxes of 10 cigars. This past year, as Federal celebrated its 95th anniversary, the company gave the store a new size of the Flor de las Antillas Maduro, this time a box-pressed torpedo, once again limited to 100 boxes. The 6 1/8 x 52 box-pressed torpedo has become a bit more iconic thanks to the Le Bijou version of this vitola was named Cigar Aficionado’s cigar of the year last year. That being said, it’s always been fairly easy to recognize: a chocolate bar press with a slightly long cap. The orange foot band is replaced by the Flor de las Antillas’ red bad and the wrapper is darker than both the aforementioned Le Bijou and the regular Flor de las Antillas. It’s a bit bumpy, but the most noticeable feature is the high content of oil on the cigar. Aroma off the wrapper has lots of barnyard with some sweet cocoa. The foot has some bark, deeper wood, barbecue sauce, barnyard, real cocoa and pepper. There’s lots of muted cocoa on the cold draw, barnyard, orange bitters and leather.

Berry, cedar, hay and soggy french fries is what emerges once the Flor de las Antillas Maduro hits the lips. The most noticeable flavor is actually a spiciness on the lips. As it progresses, there’s a graininess that cements itself as the core flavor. Over top, there’s a dark rum-like oak, and some licorice. The spiciness remains on the lips. While there aren’t a ton of flavors, there is quite a bit of flavor and those that are there make nice progressions once the smoke leaves the palate. The flavor is medium-full, while strength and body is medium. Construction is fantastic with solid chunks of ash and great burn. The second third shows a lot more saltiness on the tongue. The oak remains, along with a familiar grassy flavor, now joined by hay, charcoal, burnt fried rice and a mild green pepper on the tongue. That rice flavor characters over to the retrohale, which has picked up in both intensity and uniqueness, now with burnt citrus, earthiness, cinnamon, burnt citrus and black pepper. The strength picks up to medium-full, while the body and flavor remain quite similar. As the cigar finishes, peanut shells dominate the profile of the Flor de las Antillas Maduro Box Pressed Torpedo. It’s joined by a harsh earthiness, pepper and the same green pepper on the tongue. On the retrohale, the rice has been replaced by a smooth fruitiness now orange creaminess and some raspberry. It’s important to mention that the grainy and oak character is still around, a smaller part of the core flavor on the tongue. Construction remains excellent to the end with a great draw, even ash and no burn issues. 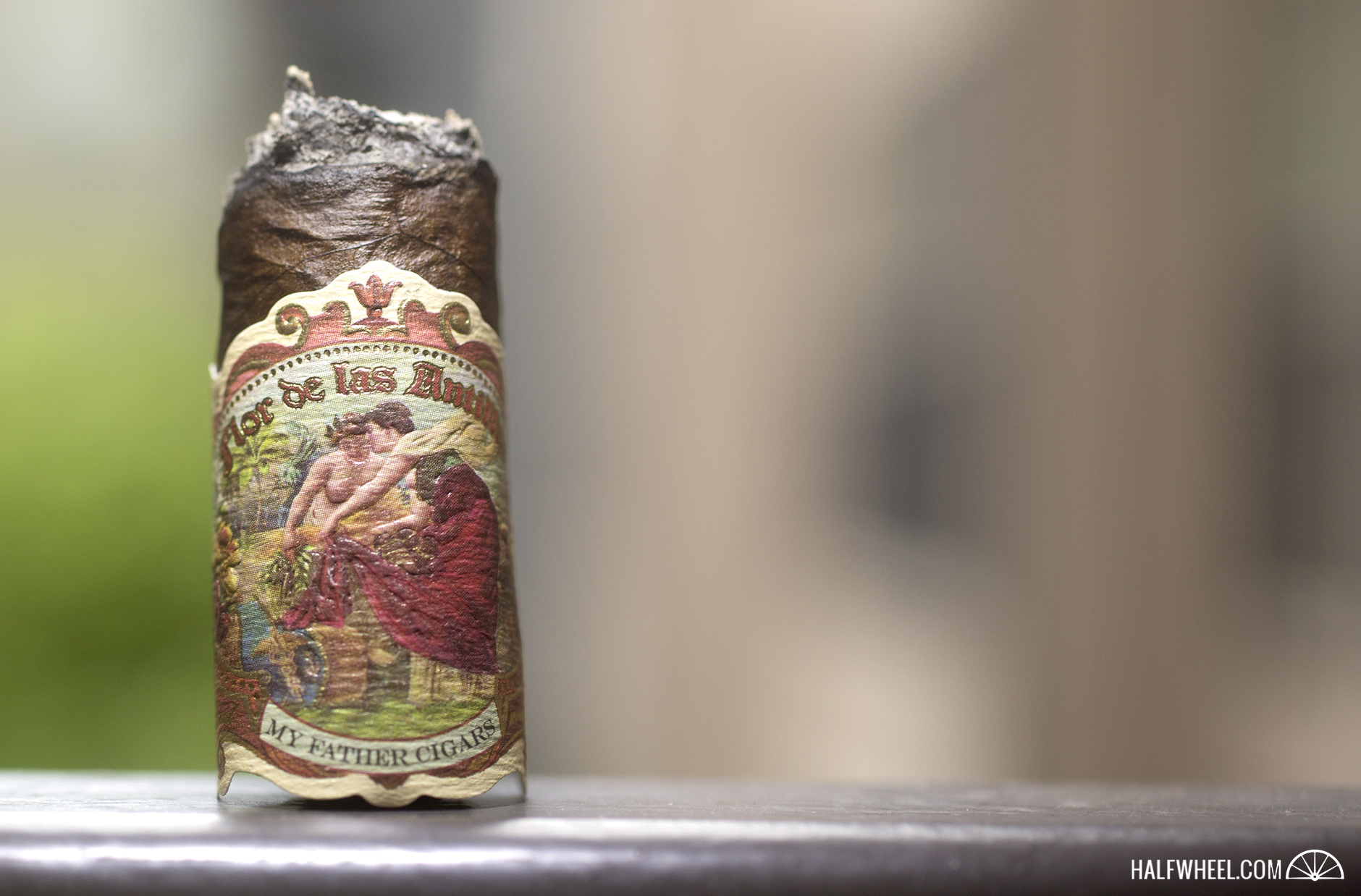 Having not smoked the original Flor de las Antillas Maduro, and not really remembering a particular review I edited from a year ago, I really wasn’t sure what to expect from this Flor de las Antillas Maduro. What I got was a cigar that is noticeably stronger than the Flor de las Antillas I’ve smoked, stronger than most of the Jaime Garcia Reserva Especials I’ve smoked. Many times the complaint with My Father is that while the company makes good cigars, a lot of its lines taste quite similar. It’s not the same punch I remember from earlier blends from the Garcías, rather, a heavier thud in terms of the strength. It’s a good cigar and a blend that I think many will enjoy if it ever sees wider distribution.