In June 2013, My Father Cigars, Inc. introduced the first extension to its relatively new Flor de las Antillas line. Little did anyone know, it would be the first of a half-dozen new vitolas the company would introduce for the line over the next year-and-a-half, all exclusives to either specific retailers or distributors. That first cigar was the Flor de las Antillas Lancero, a proper 7 1/2 x 38 version of the line, an exclusive to Dallas-based Up In Smoke.

Here’s what I said when I reviewed the cigar right around its release in June 2013:

This is an enjoyable cigar, but it’s neither challenging, nor particularly complex. It’s an easy cigar, particularly after the first third, and there’s something to be said for that. I don’t think it has much of a wow factor, but if you like the Flor de las Antillas, I think it’s worth trying to get your hands on a few. In many ways, particularly the first third its different, in other ways, it’s similar—and I think better. I’m happy to have a quite a few more, there’s a time and a place for these.

While the 15-month period that began in June 2013 gave cigar smokers a lot of options in regards to different sizes of Flor de las Antillas, the line’s expansion slowed down quite a bit. Since then, there have only been two additional vitolas added to the regular version of the Flor de las Antillas line.

Earlier this year, My Father offered the Flor de las Antillas Lancero again, though this time to the 80 or so retailers that are members of the Tobacconists’ Association of America (TAA).

In recent years, the TAA has secured a growing number of exclusive cigars for its retailers, something that hit a record number this year as the organization celebrated its 50th anniversary.

Of note, the TAA version carries a red ribbon at the foot that reads TAA, an obvious difference from the Up In Smoke release. It’s been a while since I smoked a Flor de las Antillas but the wrapper color is remarkably consistent to the original version from five years ago. To the touch, it feels like the buttery soft leather that I hear described in ads for a certain home electronics store’s furniture, though there’s a lot of veins running every which way. Aroma off the wrapper has some cocoa, raspberry and acidity. The foot is much stronger with sherry on top of some almonds and a sweetness that reminds me of opening a package of cinnamon rolls I used to enjoy as a child. The cold draw isn’t great with way too much acidity over dry nuts and some leather. It’s detailed, but the acidity is just way too much.

Fortunately, the Flor de las Antillas starts without the acidity;  instead, there’s a lot of rich nuttiness and some woody flavors. The first third largely retains that profile, adding some creaminess and sunflower seeds. Through the nose there’s a bit of creaminess, orange juice and a touch of a harshness. Those flavors are all quite separated, avoiding tasing like an orange creamsicle. Flavor is full, body is nearly full and the strength is medium-plus. A familiar sherry adds to the profile in the second third, which is similar though neither as sweet nor as vibrant as the first third. There are some dry leaves and a bit of a harshness, but overall the profile remains quite good. 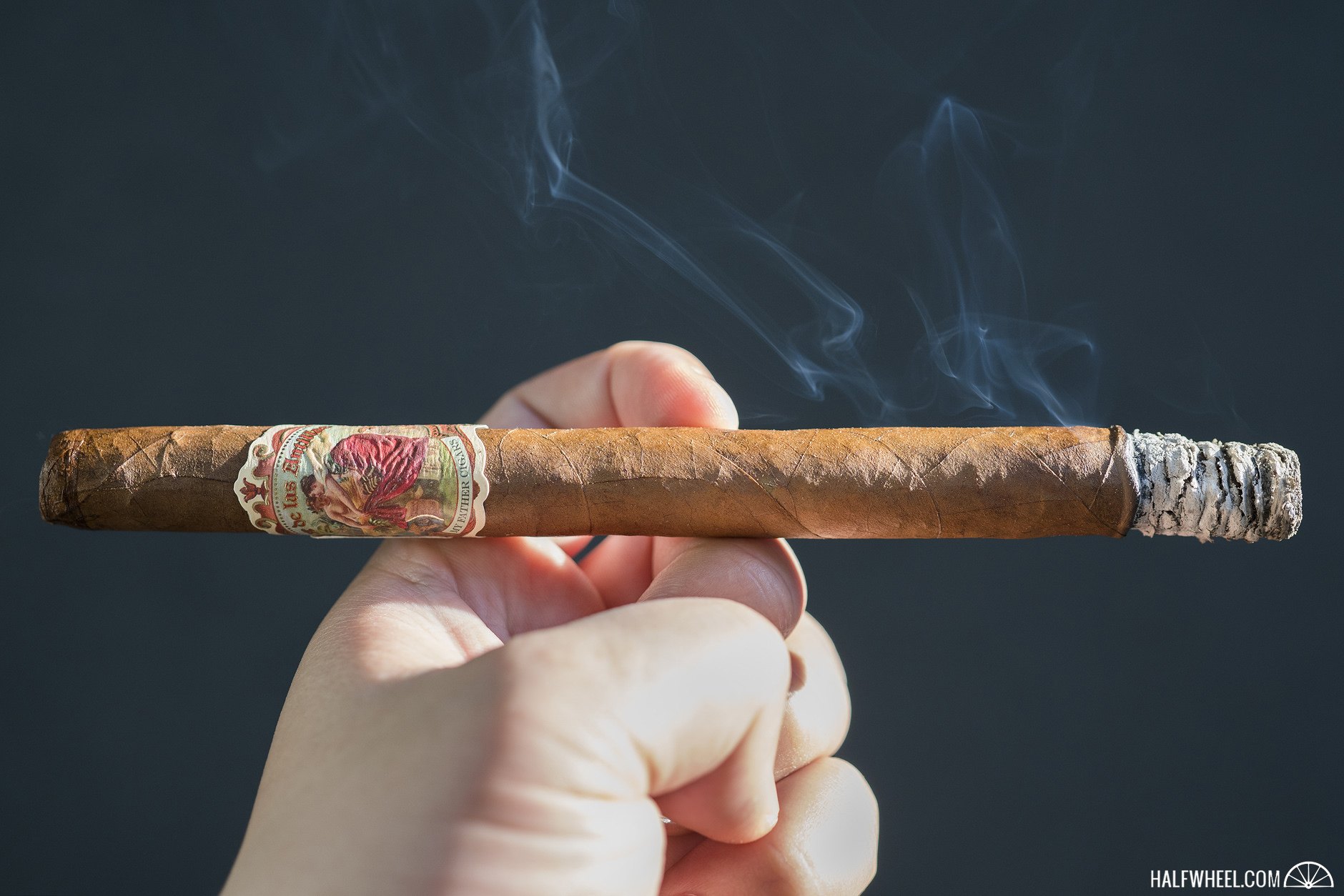 While the first two thirds are rather similar, the final third is quite different. The Flor de las Antillas Lancero becomes much more acidic in the mouth with earthiness and mustard standing out. In addition, for the first time, there’s a defined pepper flavor in the form of a black pepper. The retrohales provide a bit of relief with some berry sweetness, but it’s quickly taken over the acidity in the mouth, which is less than ideal. Construction is ideal from start to finish: a nicely stacked ash, a great draw for the size and a fair amount of smoke production. As with many lanceros, the draw tightens just a bit with around two inches left, which helps to keep the cigar burning at a predictable rate.

From start to finish, the 2018 version of the Flor de las Antillas Lancero is better than I remember the original cigar being, particularly in the first half of the cigar, which is excellent. Unfortunately, the two halves are quite different and by the final third, I am begging for something other than acidity. That said, there is a lot to like, including the construction, which was flawless and exactly how a lancero should smoke.