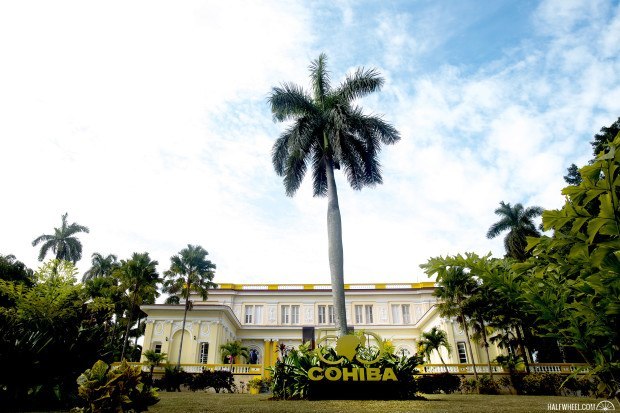 Like ants on the carcass of a dead animal.

That was the thought that went through my mind more than once as I watched the large number of members of various groups walk around, into and through the El Laguito factory, where Cohiba cigars are produced. When I got there for a tour, there looked to be more than 200 people on the premise, and it got a little ridiculous at times to see anything without someone either in the way, taking a photograph, or tripping over something.

The factory itself is actually named after a small pond in the area, and is a converted mansion that once housed a cigar rolling school for women in the 1960s.

The mansion is part of a bigger complex of buildings, and sits on top of a small hill and features marble columns and stained glass windows, and is surrounded by both palm trees as well as copious amounts of landscaping. The main building has obviously been refinished recently, and is quite impressive when seen for the first time. 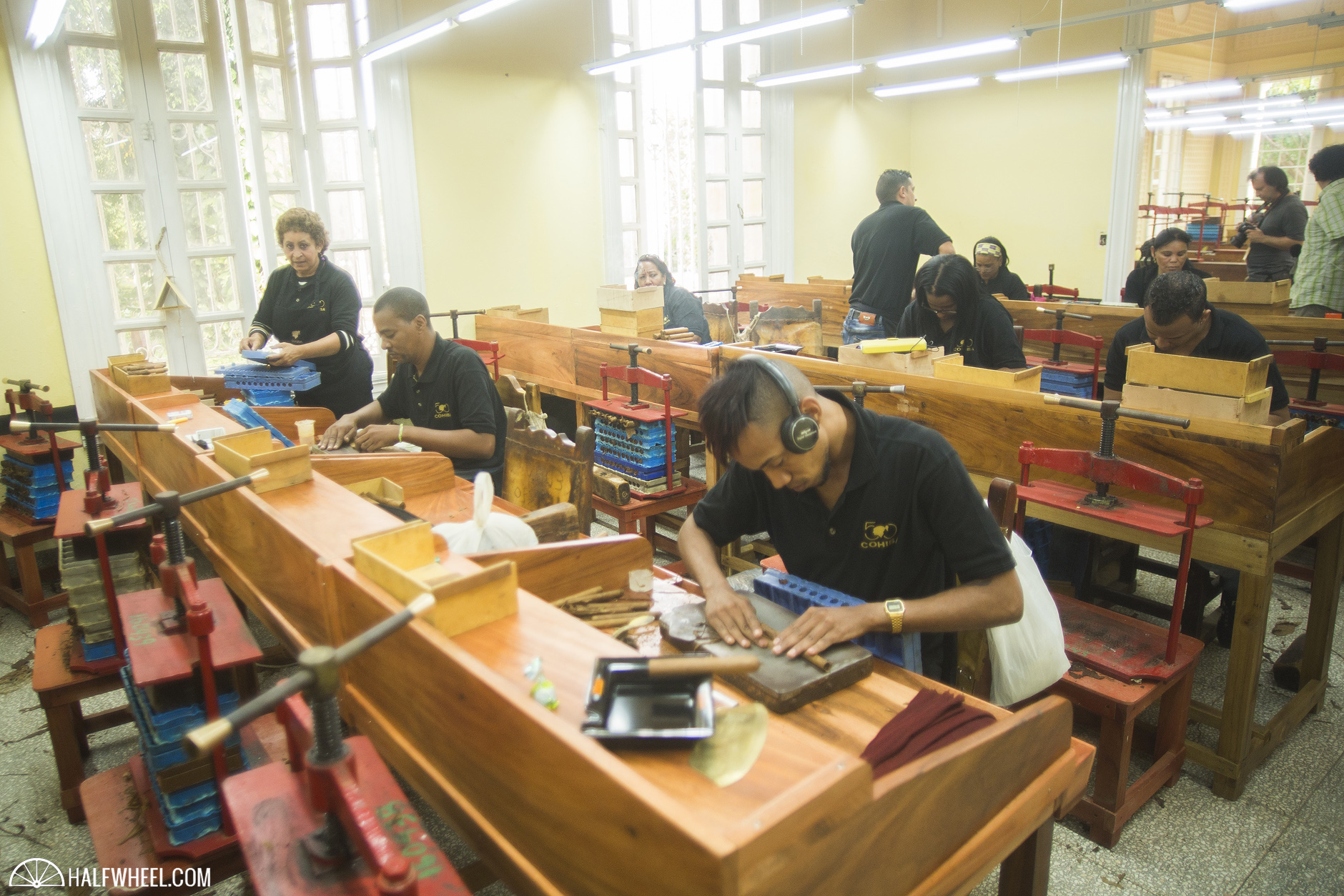 Walking into the front door, there is a massive staircase directly in front of you sporting a large Cohiba logo, along with rooms on either side, each of which house workers that are rolling Cohiba cigars. I was honestly shocked at just how few rollers there were—I counted 36 chairs in four different rooms, although not all of them were full while were there—but they seemed to be pushing cigars out fairly rapidly. 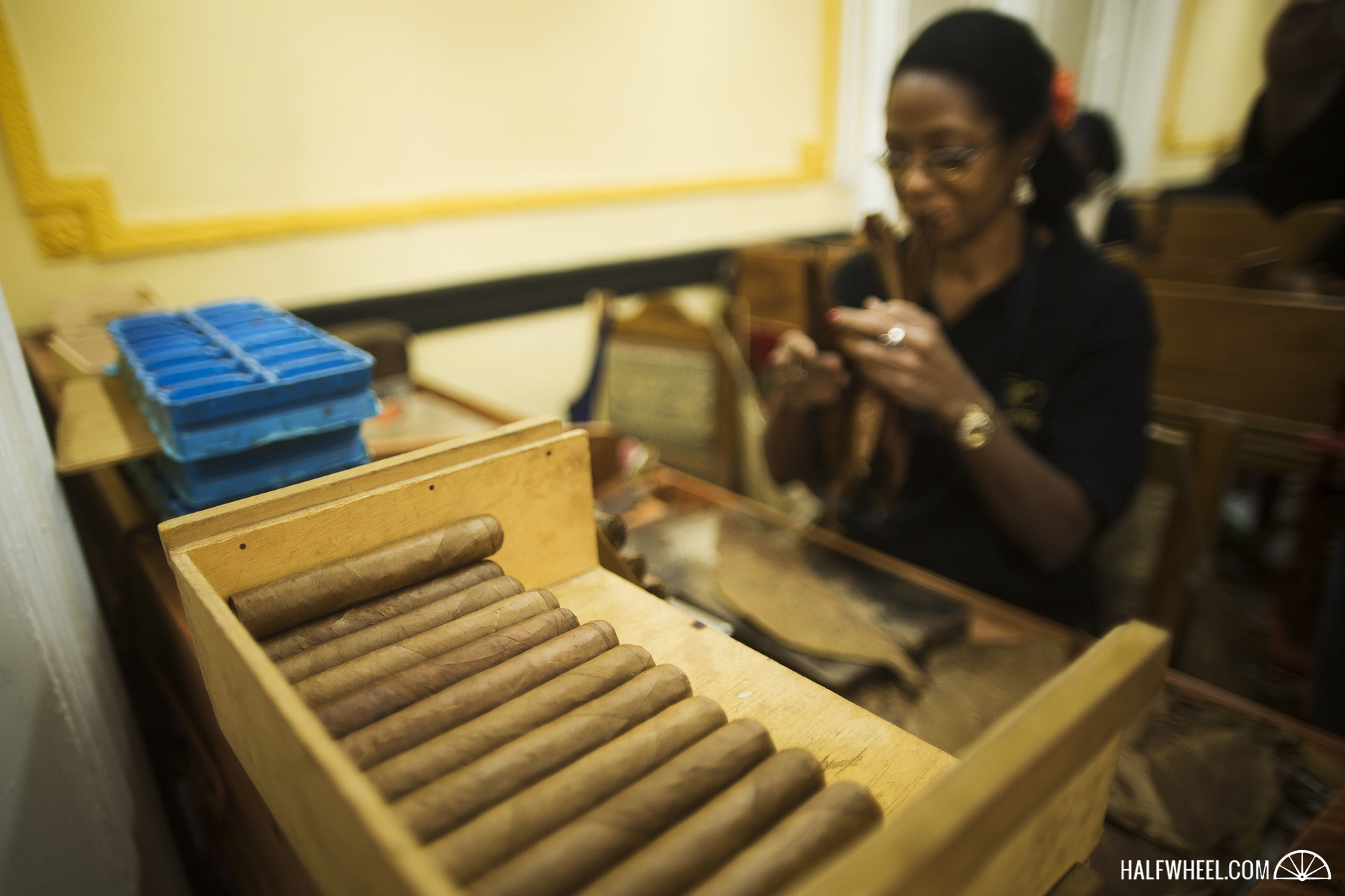 In fact, after visiting multiple factories in both Nicaragua and the Dominican Republic, this is the first factory I have seen that does not have a large room filled with all of the tabaqueros rolling, making it fairly unique in that regard. It also dampens the background noise that is usually present in rolling rooms, and while each separate room was not dead quiet, I was surprised at just how little noise I noticed as I was walking through. 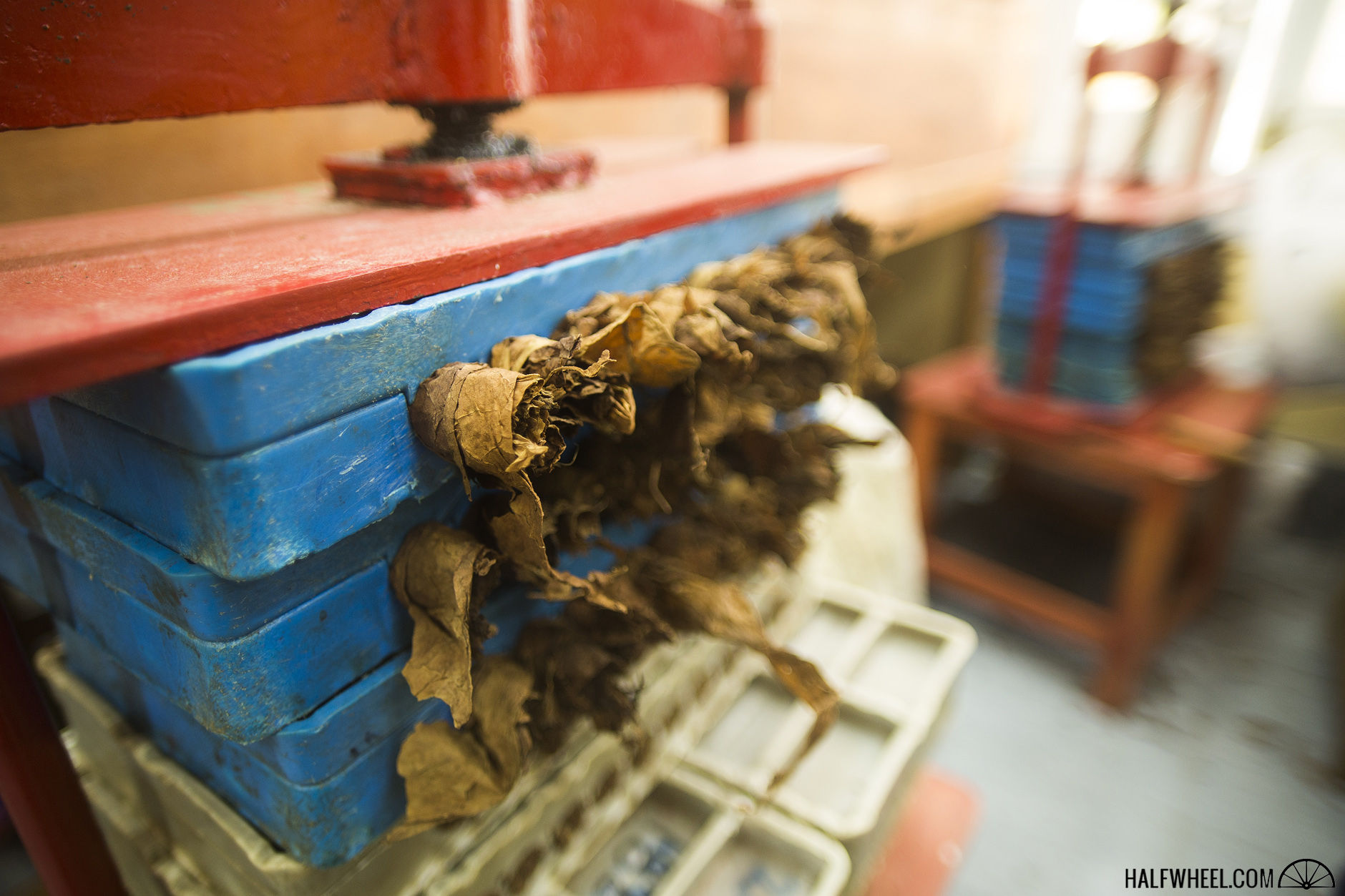 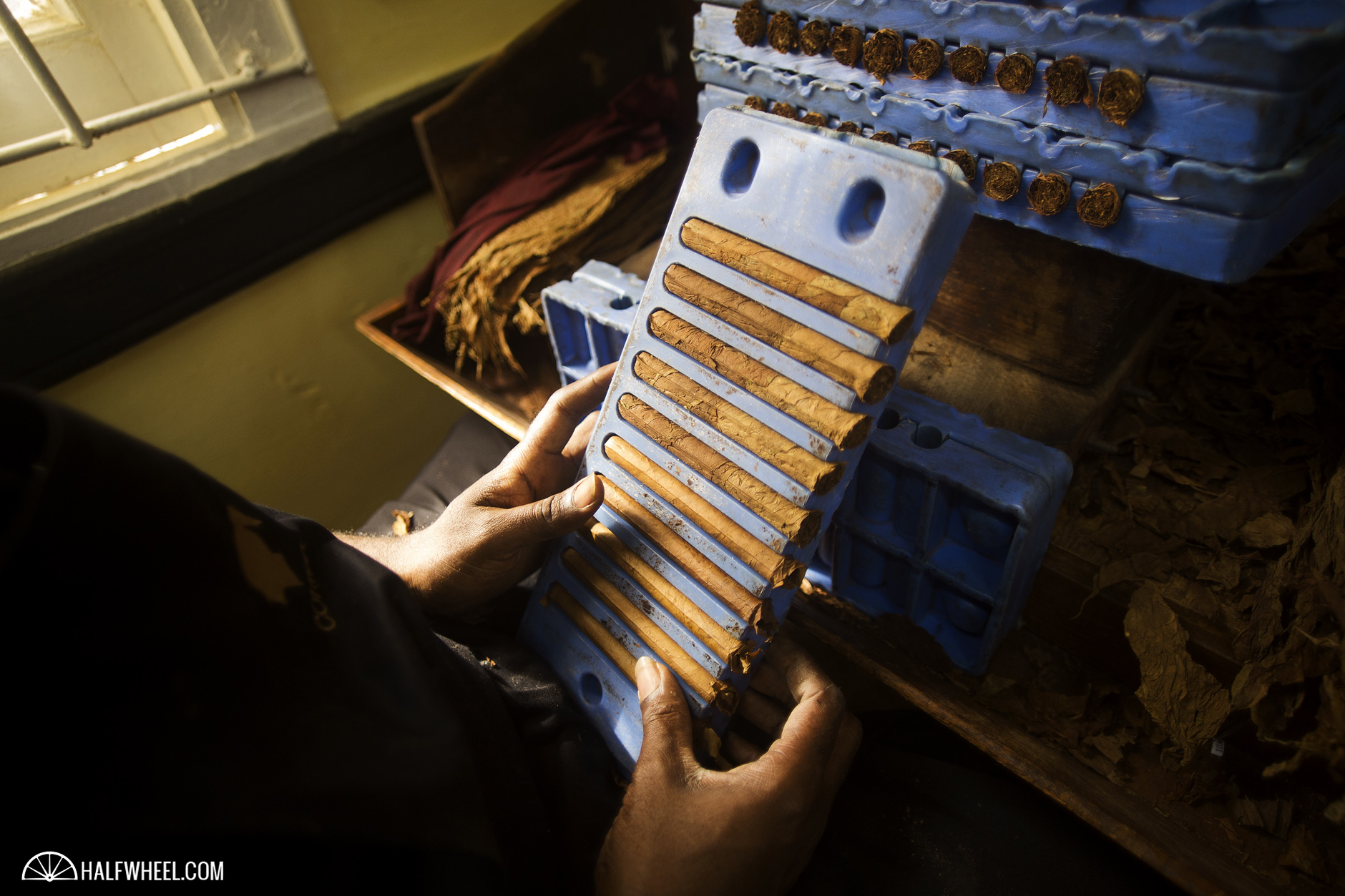 There seemed to be no rhyme or reason to who sat where, and there were cigar presses in just about every space that could hold them, forcing people to walk around them, or in one case that I saw, step over them to get to where they needed to go. 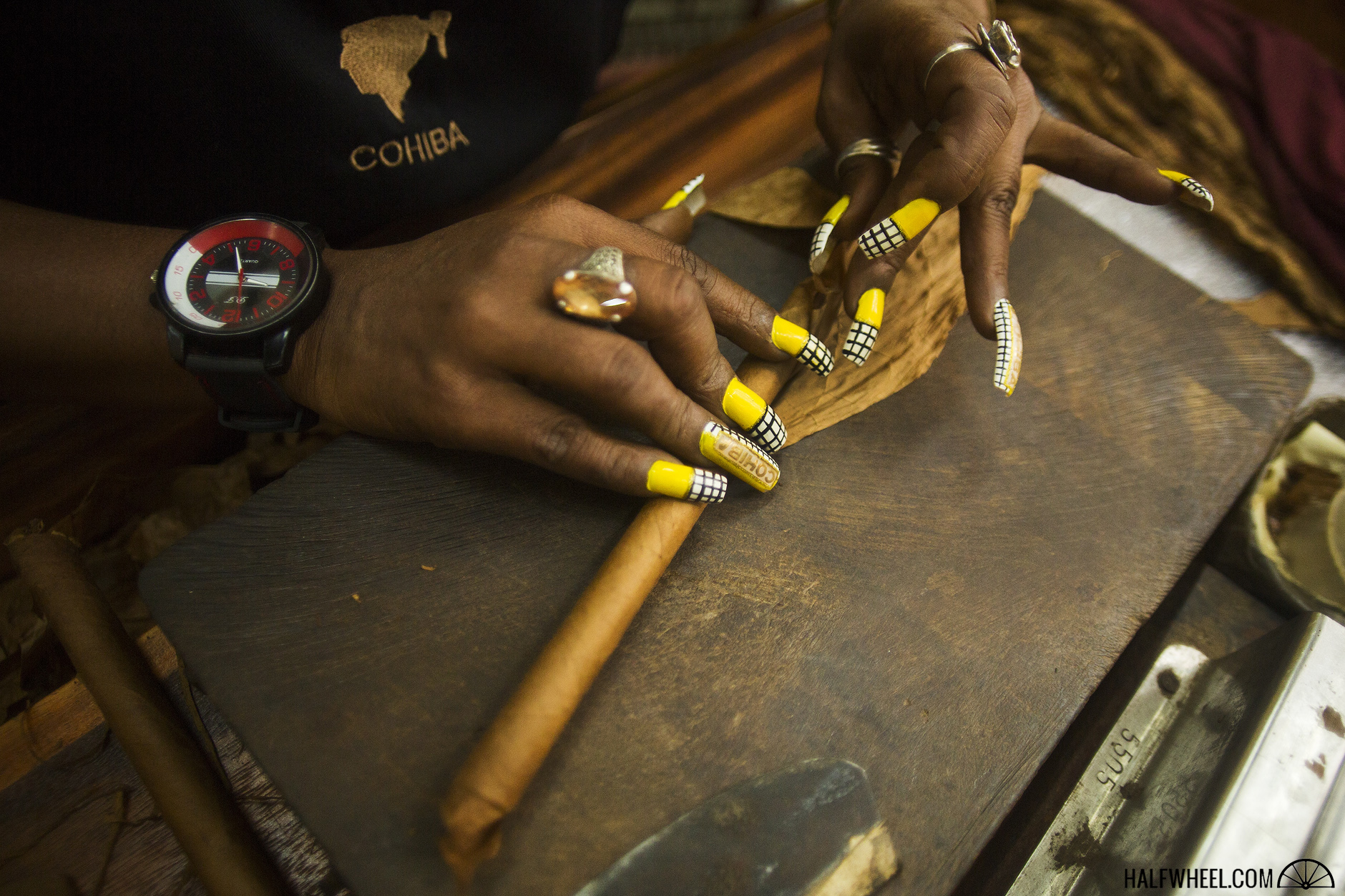 The rollers themselves were almost exclusively women, and most of them had some very interesting designs on their fingernails, but the ones sporting the Cohiba logo definitely took the cake. They were quite long, and when I asked her if they ever got in the way, the roller told me that at first they were a pain, but that she eventually got used to them enough that they now do not cause any issues. 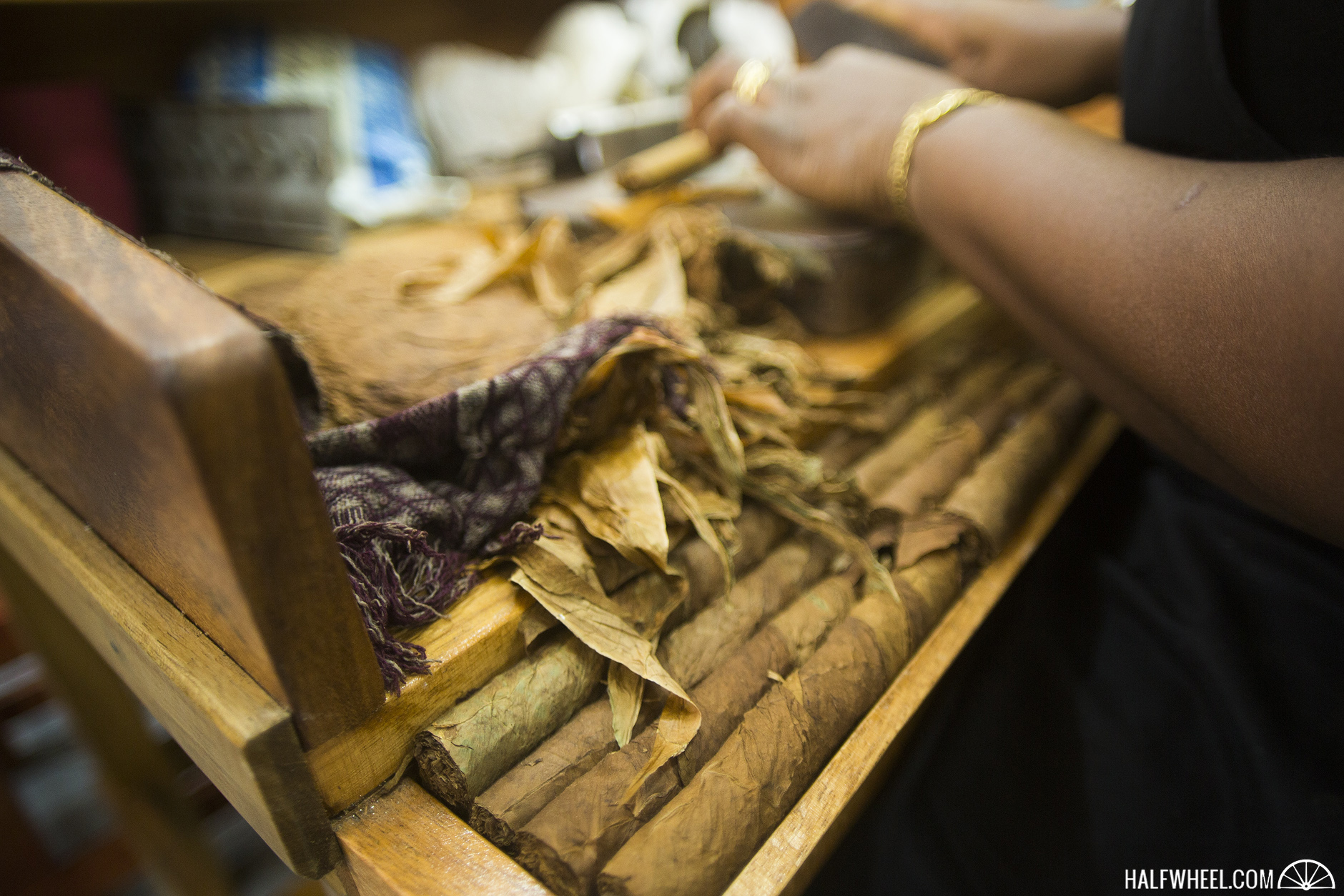 As I was walking through the rooms, I noticed that each roller had a small tray under the rolling table that seemed designed to hold a small number of cigars, although the numbers looked to be different for every person. I was later told that those were the cigars that each roller could take home with them, although they were limited to five per day. In addition, I was told each of the cigars they smoked for themselves did not include a wrapper, and in fact, I saw many workers in and around the factory smoking cigars, all sans wrapper.

Each of the rollers I talked to were more than happy to answer questions, and they seemed to be quite adapt at doing their job while talking to the hordes of people that had descended upon them. In fact, as I was walking through the rolling rooms, I was told very quietly by three different rollers they could get me a Cohiba cigar for various amounts of money fresh off of the rolling table—in my case, $15, $20 and $25—although I did not take them up on their offer. 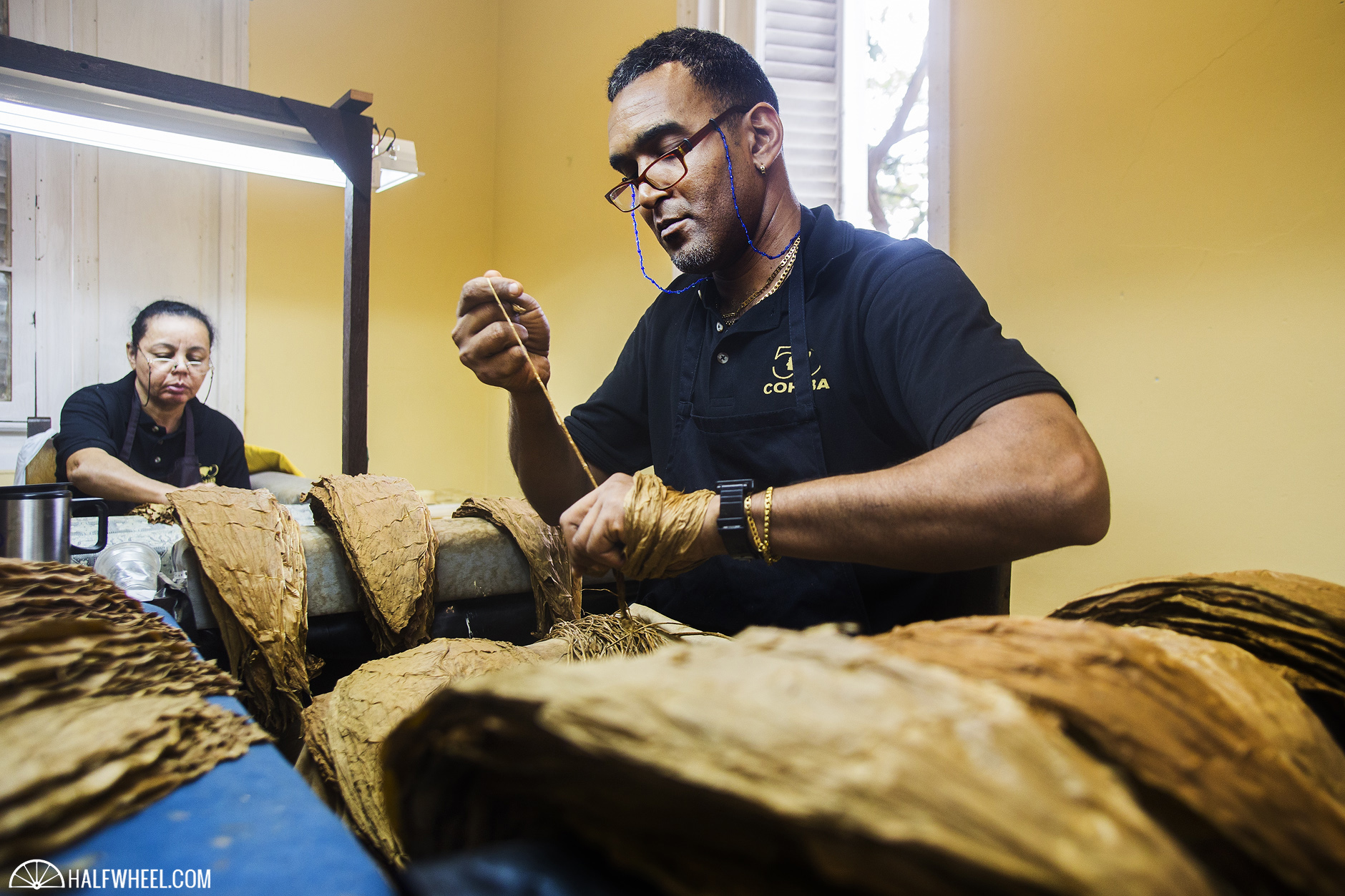 Upstairs, we were shown the stripping room, where the tobacco leaves have veins stripped out of them. Once again, the room was quite small, with only six different people inside, but they seemed to have plenty of room to do what they needed to. Interestingly, while they had a table that the tobacco leaves sat on, each of the strippers actually kept the leaves they were working on on their laps until they were done with an entire batch. 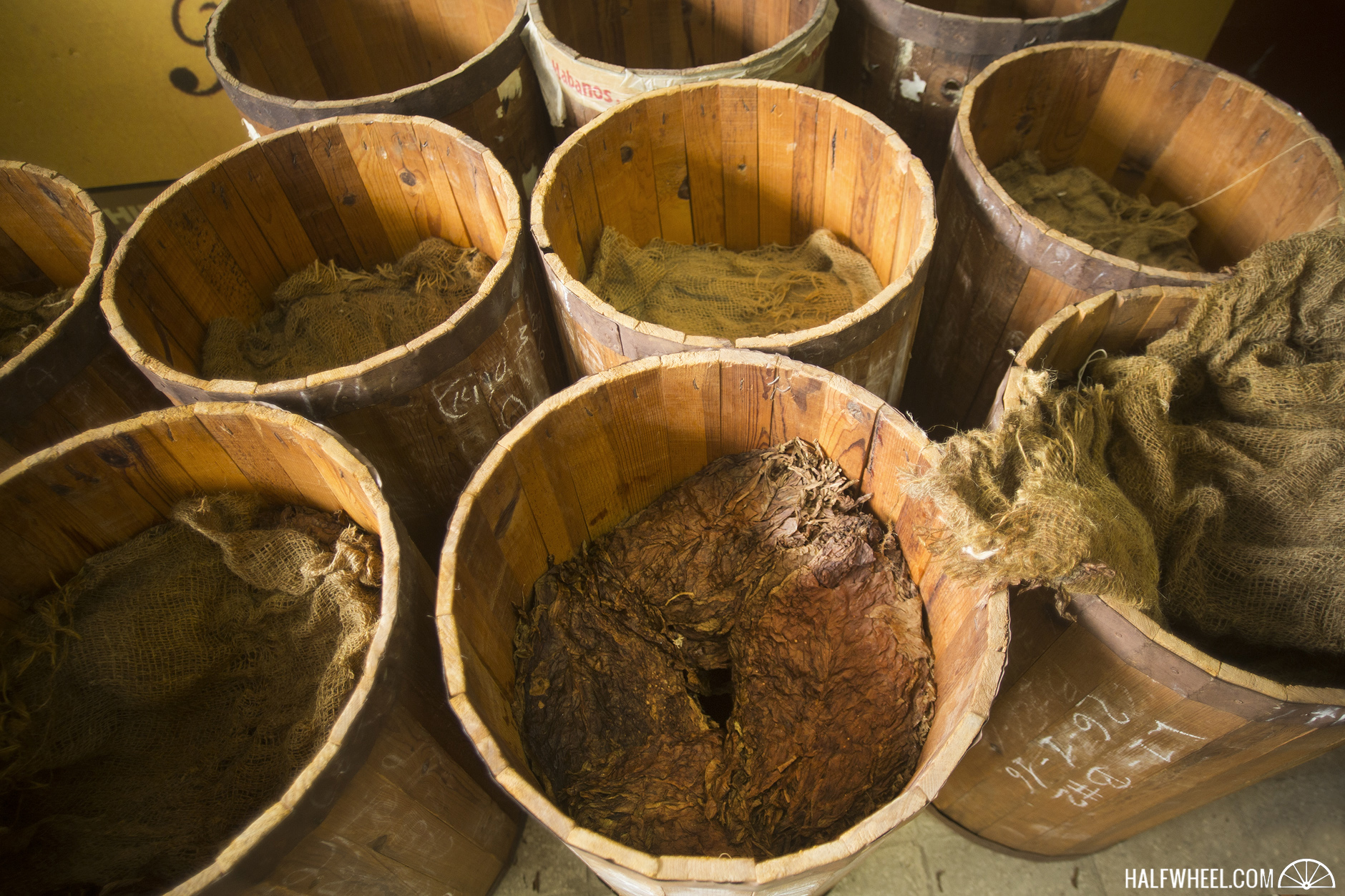 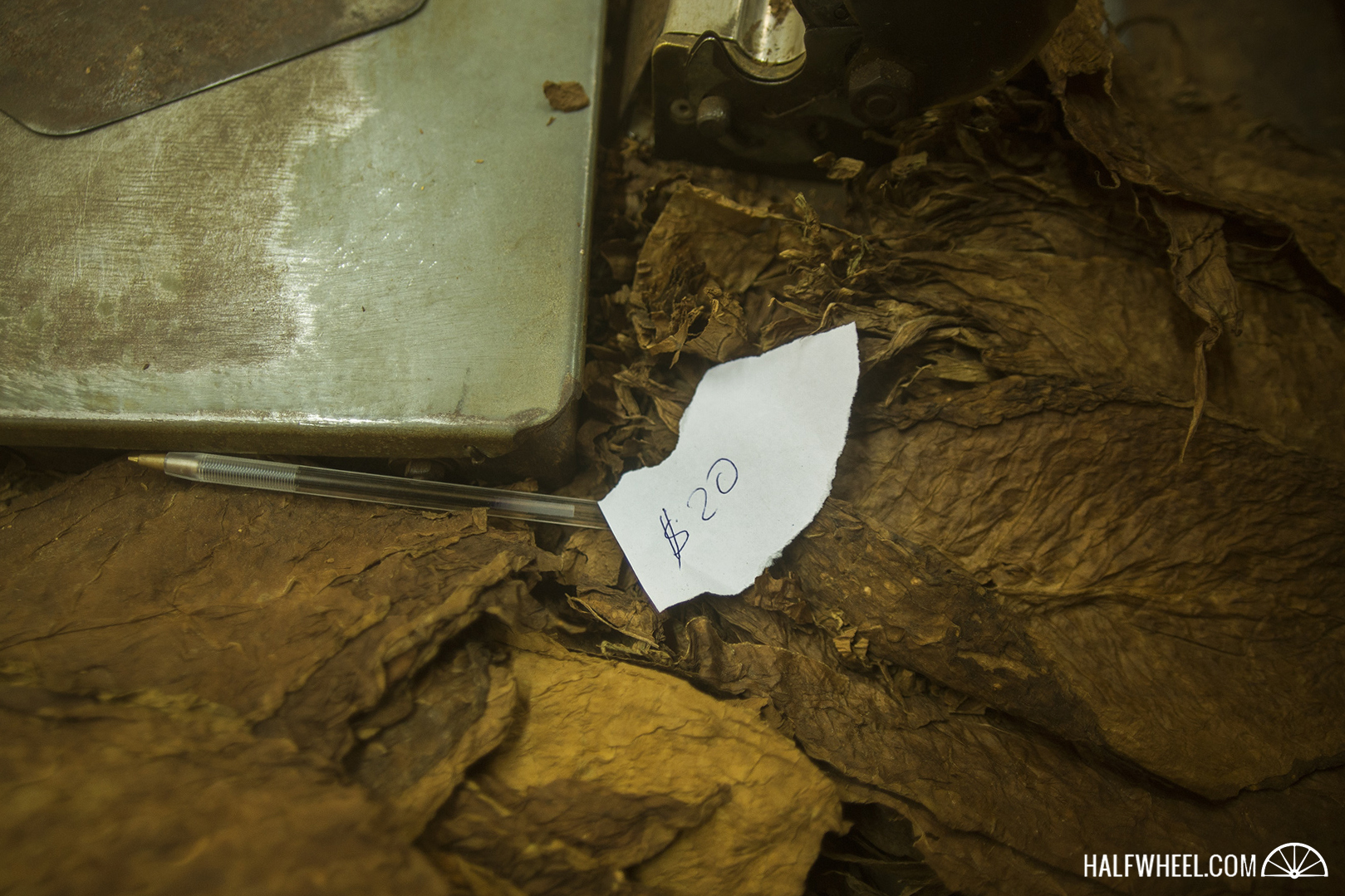 I got a bit bored with following along with everyone else, so I decided to see where else I could go, and wandered around the complex a bit, finally ending up in a completely separate building that housed the raw tobacco that was being aged. While I was not sure if I was really supposed to be there, the workers in that particular area were more than happy to talk to me and show me around, ending up in a back room where tobacco leaves were aging in wooden barrels covered in burlap sacks. This third fermentation is apparently unique in all of the different Cuban cigar brands, and is supposed to impart an overall smoother flavor. 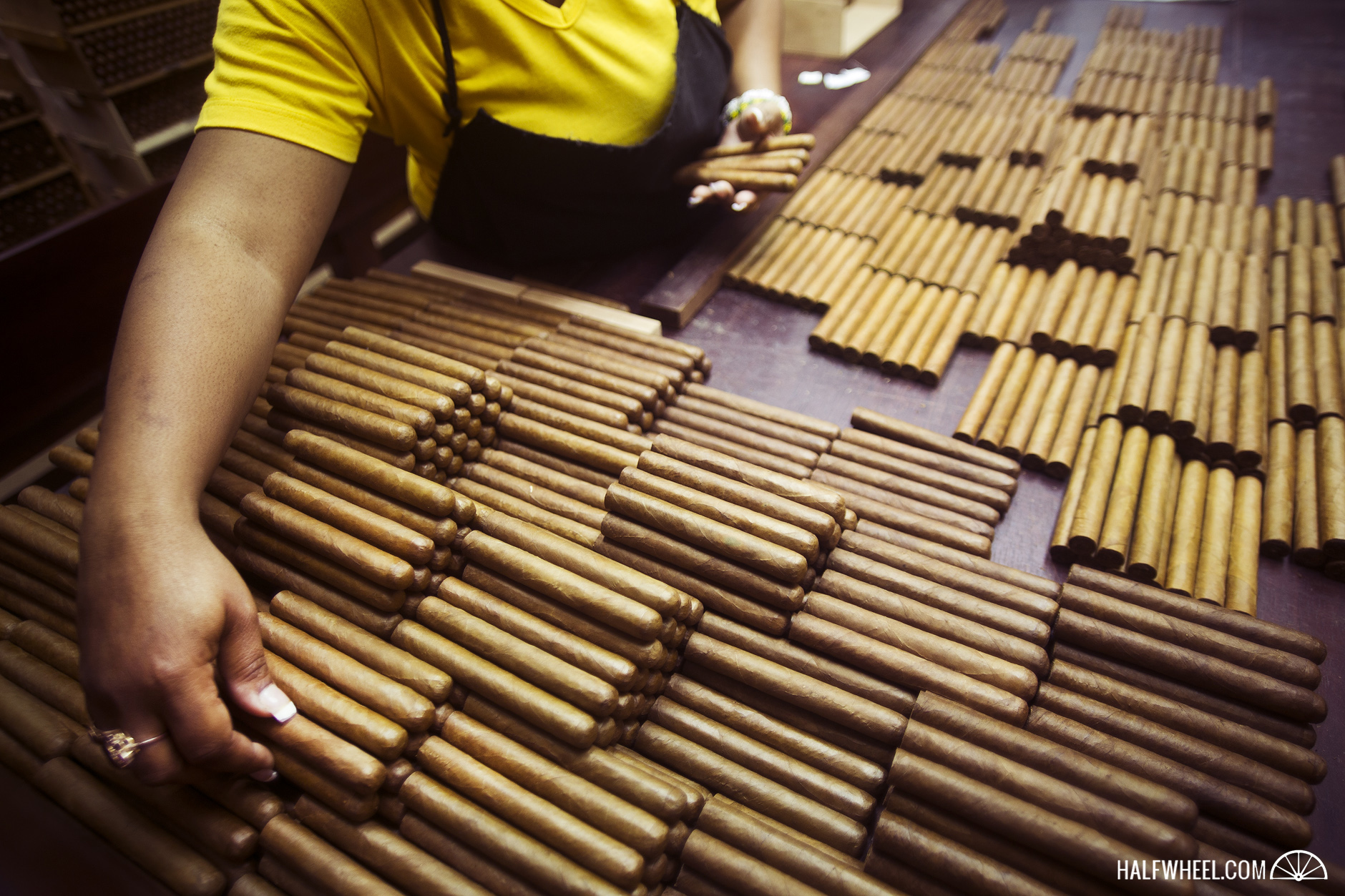 After leaving that area, I rejoined the rest of the group and saw the workers who color sort the finished cigars into piles depending on both the color and shade of each wrapper. There was a noticeable difference between all of the cigars, and it was fascinating to watch the worker compare a cigar to one group, then move on to another before deciding the best location for it. 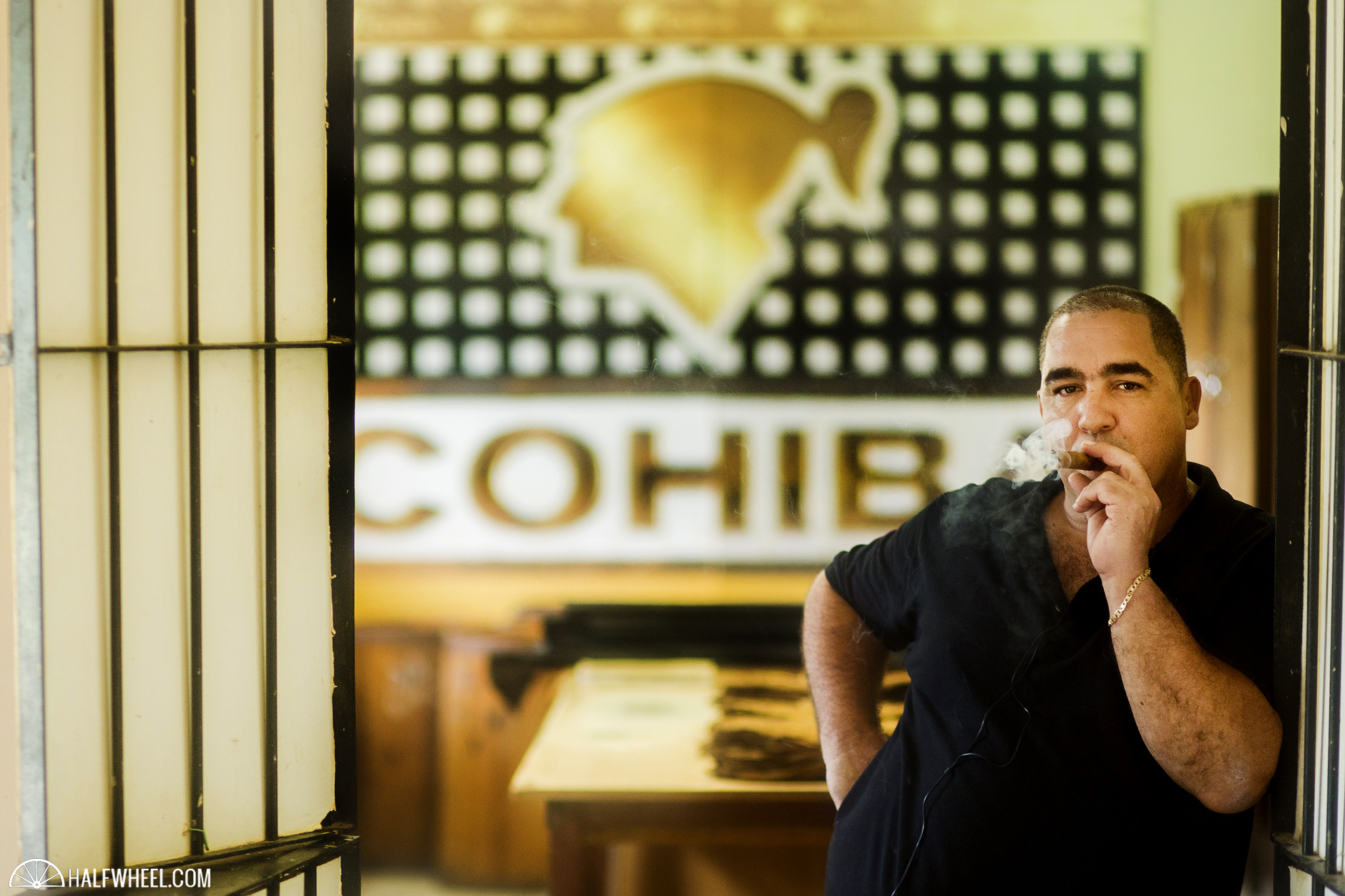 After that, the tour was finished and we were shuttled out the back door where we were handed a Cohiba Siglo I Tubo and forced to leave the premises, although they were fairly nice about it. I wanted to see if I missed anything, so I tried to walk around the building, but not before being tracked down and told in no uncertain terms that I would be leaving immediately.

They probably thought I was trying to score another Siglo I.

There was no scheduled evening festivities on Thursday, so I hung out with friends and prepared for the gala on Friday.