It has been a dream of mine to attend the Habanos Festival in Cuba, and this year that dream has become reality.

After a less than perfect start to the first day—which saw me standing in line for four hours waiting for press credentials from officials that were two hours late opening—I was unable to attend the press conference as I planned. However, the basic information from Habanos S.A. was that there are now 27 brands of Cuban cigars sold around the world, and overall sales rose 4 percent compared to last year to $428 million. In addition, the company now has a global marketshare that reaches approximately 70 percent, although that number obviously excludes the U.S. Charlie Minato went into more detail here. 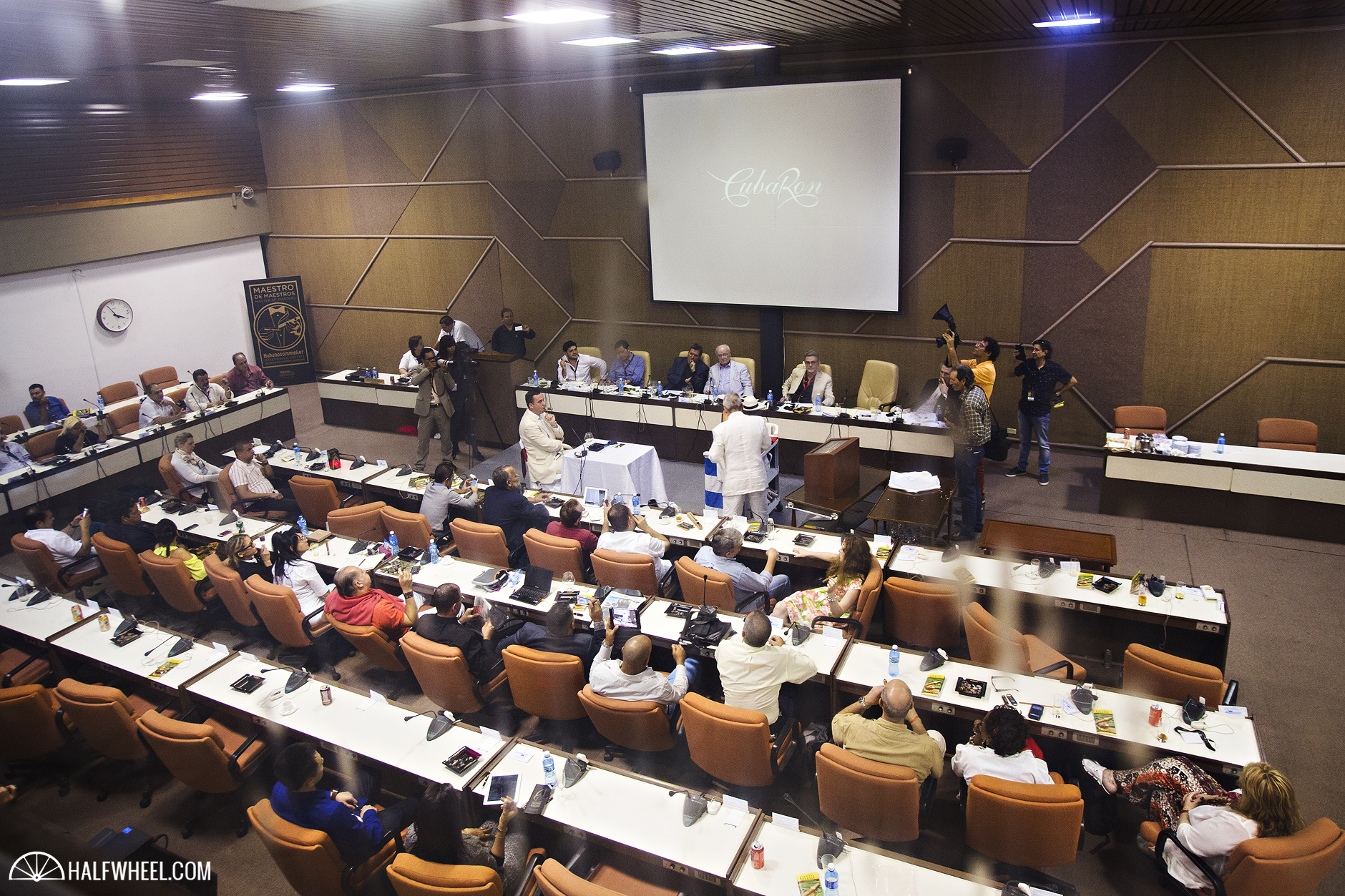 After finally obtaining my press passes, my first stop was the 15th International Habanosommelier competition, which was nicknamed the Maestro de Maestros, or Master of Masters. As in years past, the event involves contestants who judge a combination of a Cuban cigar and a drink of their choosing. However, while previous contests have included people from around the world who had won events in their home countries, this year’s contestants were made up previous year’s winners. 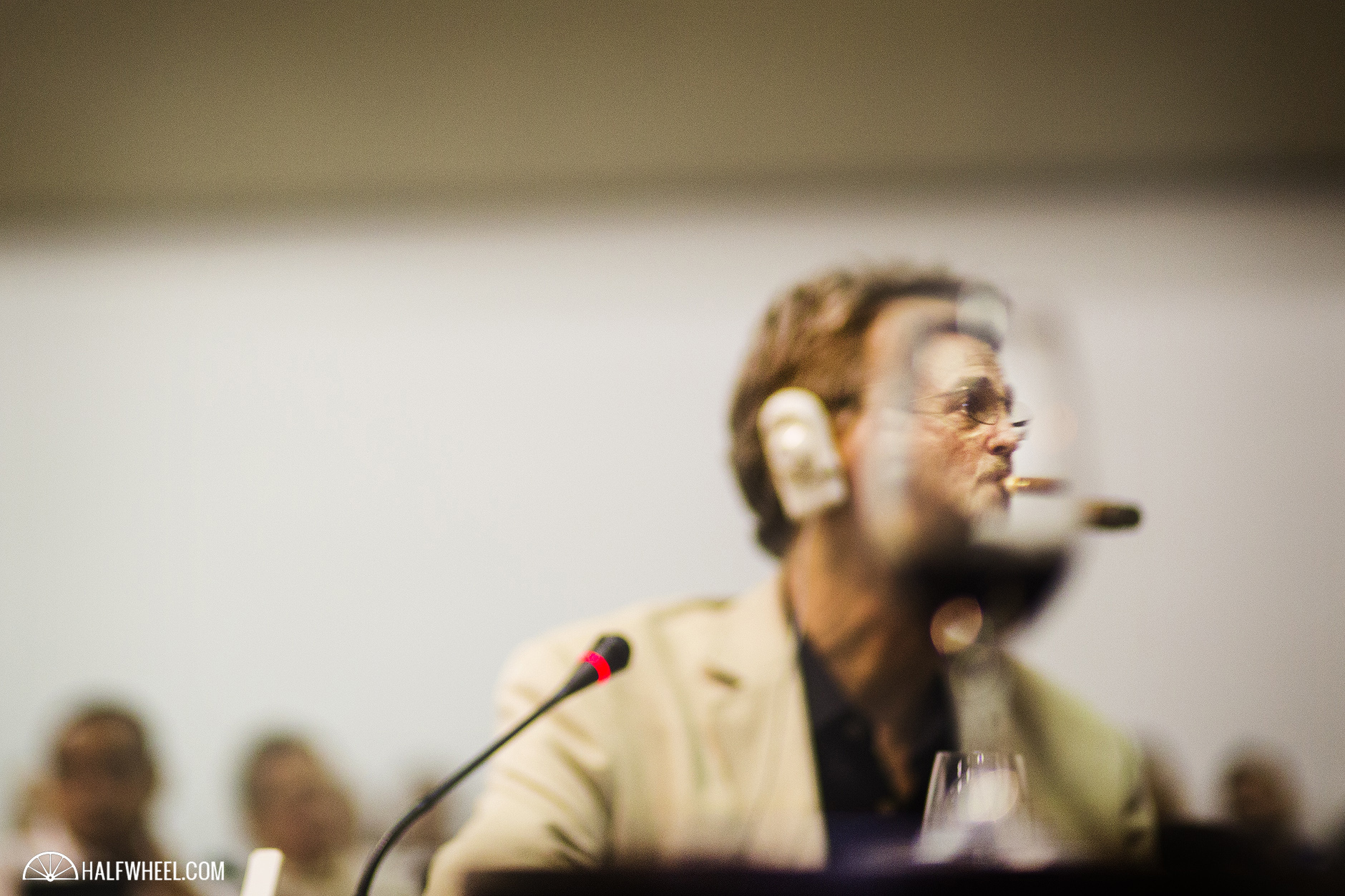 The idea behind the competition is fairly straightforward: each contestant is paired with a different Habanosommelier, who explains some of the history behind the cigars they are smoking as well as the beverage that was chosen. There are seven contestants in all, and each one of them enjoys the exact same combination as the person who is in the hot seat, with each person writing down their own thoughts and judging their own cigars. 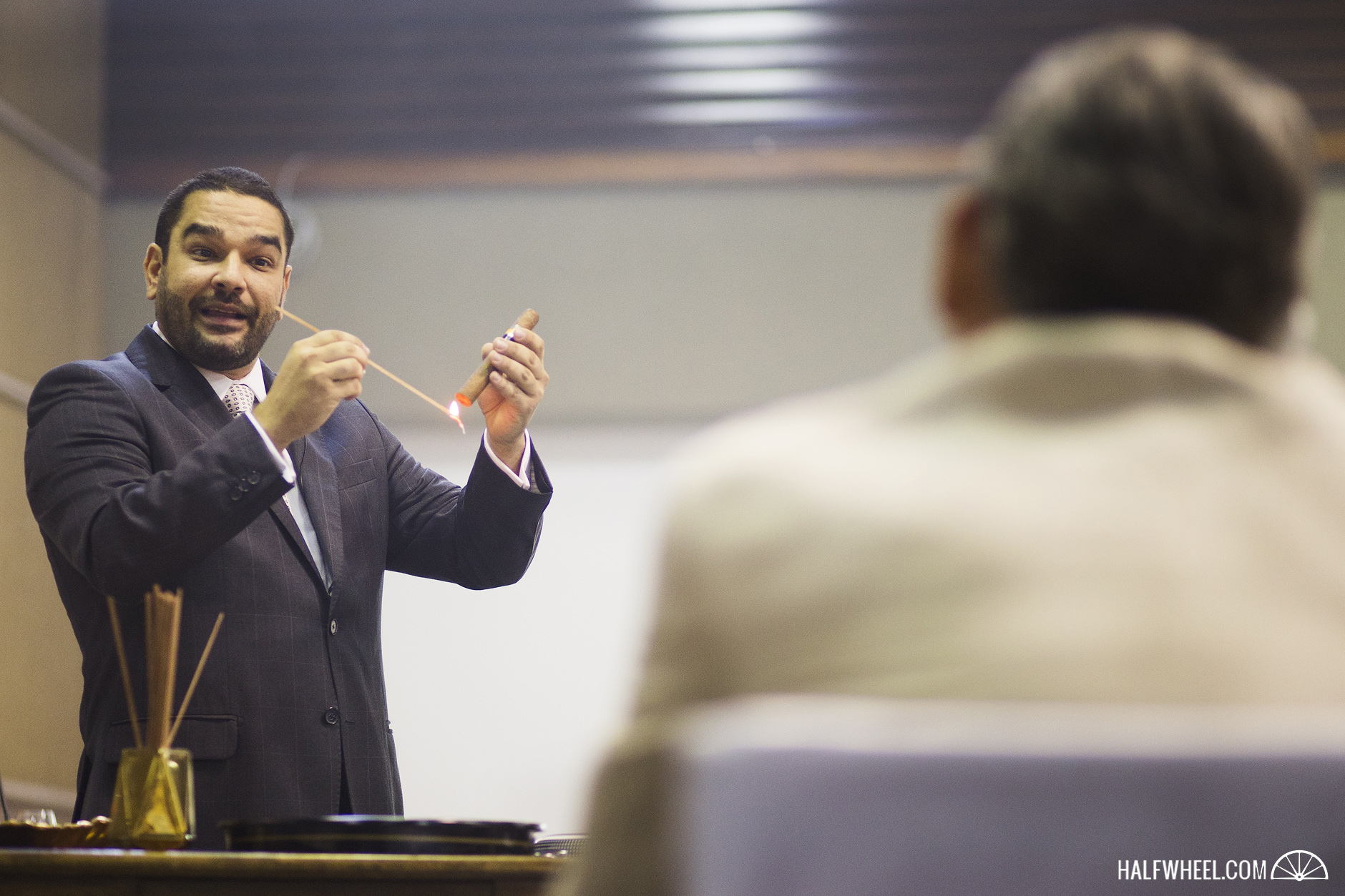 Having never attended an official sommelier competition, I have to say, I was impressed. The knowledge that both the sommeliers and judges possesses is astounding, and perhaps even a bit overwhelming at times. In addition, the event is quite formal, and features some interesting things that almost shocked me: for example, when warming the foot of the cigar for one of the contestants, one sommelier took 7:45 minutes—I timed it—and five separate cedar spills before he was satisfied. 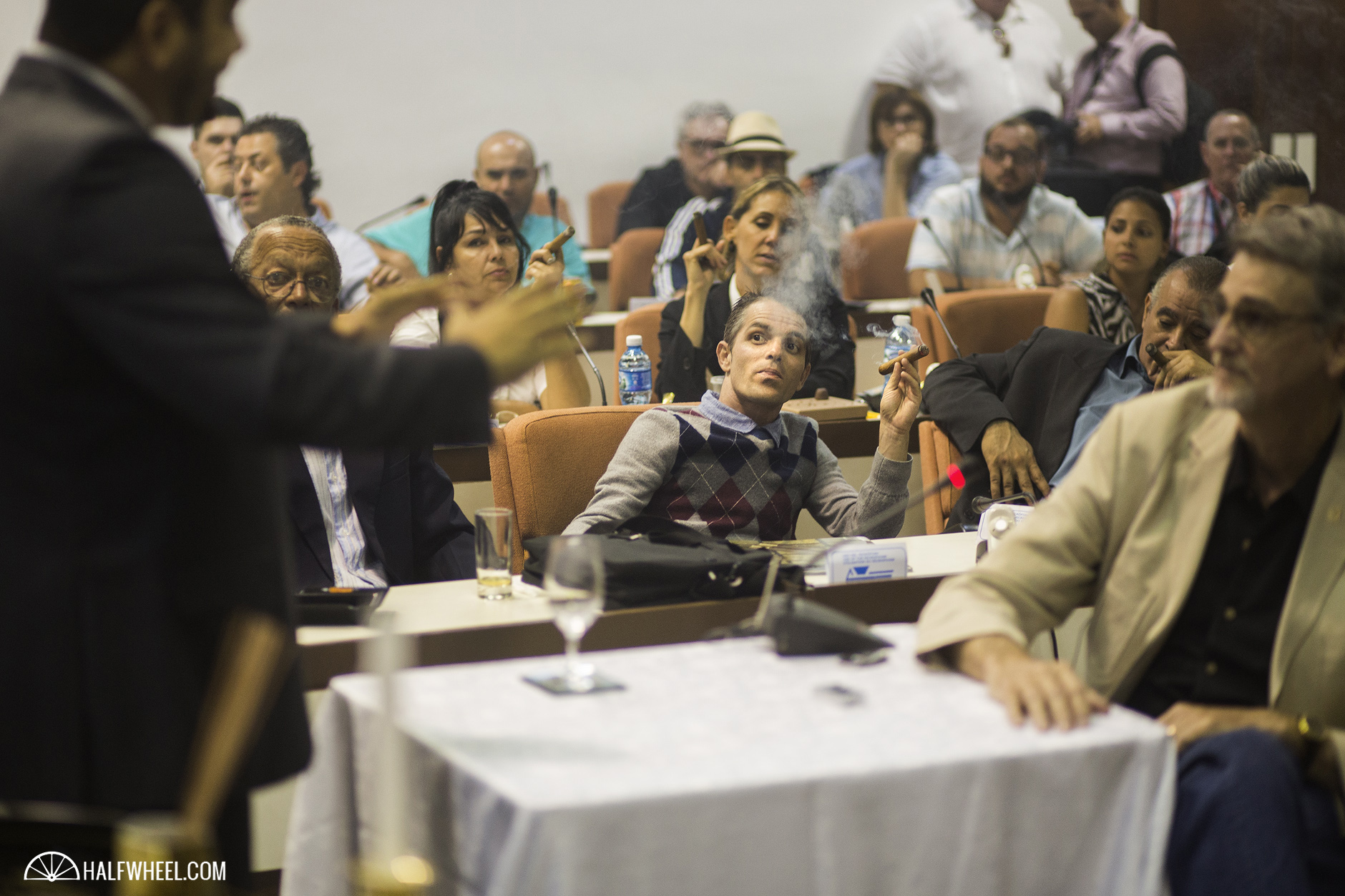 There were also two major changes introduced to the Habanosommelier contest this year: blindfolded tasting sessions of both cigars and drinks, with the preliminary round featuring contestants smoking unbanded cigars before being asked to identify the brand, factory and vitola, all while blindfolded. After a couple of hours at the Habanosommelier competition, it was time to visit the trade show. As has been the case in previous years, the show is fairly small, with about 50 different booths in all. However, this year’s event is commemorating the 50th anniversary of the Cohiba brand, and as such, there are a few interesting additions. 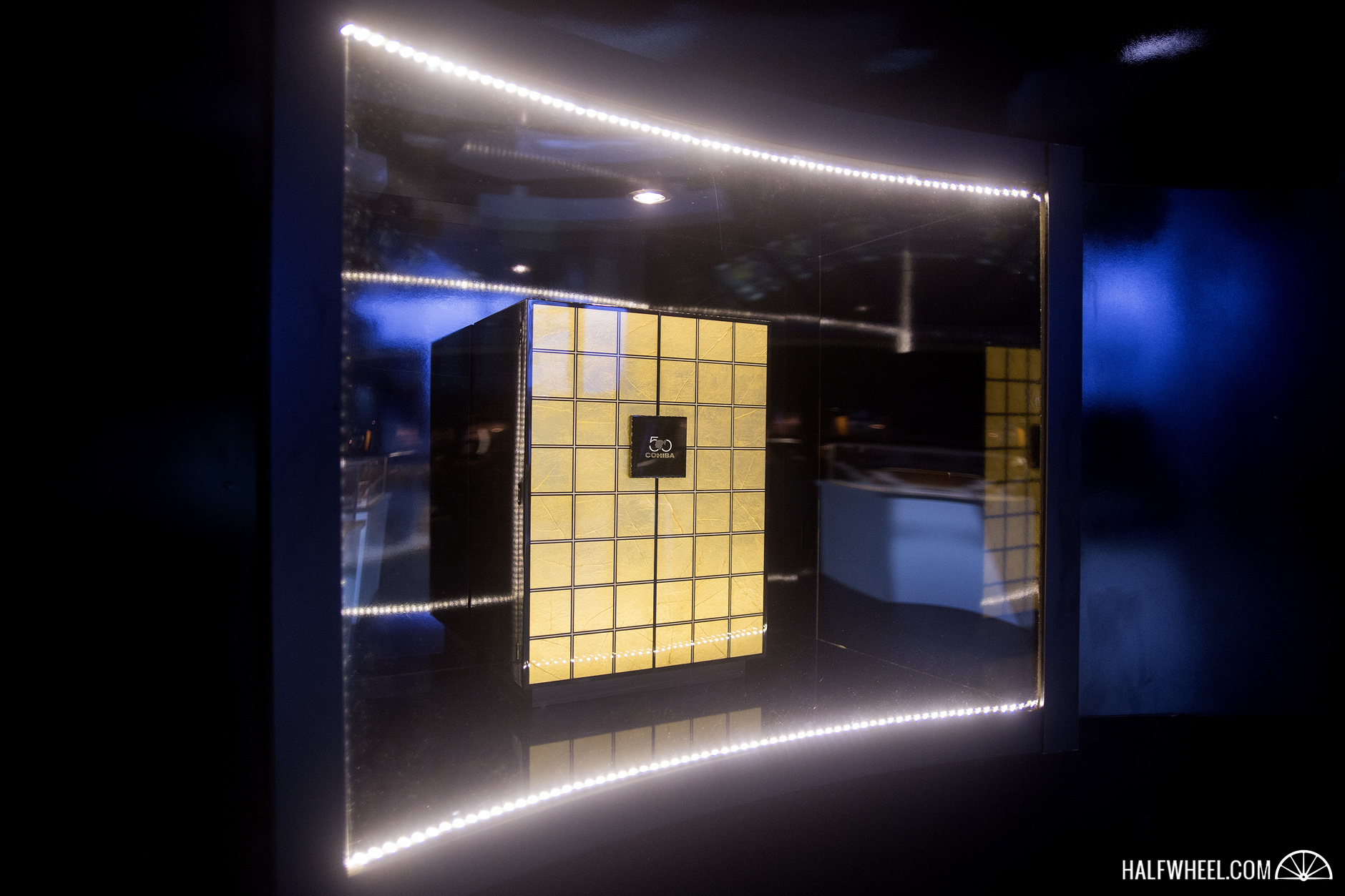 The first and easily most impressive item is the Cohiba 50 Aniversario humidor, which is made of ebony, Madagascar, sycamore and cedar wood and covered in actual ligero tobacco leaves that have been covered in 24-carat gold before being attached to the lid. The humidor is being produced by Elie Bleu, and only 50 of the boxes will be produced before being customized with each customer’s name. Included inside will be 50 Cohiba 50th cigars in a 7 x 60 vitola, the first time that size has been produced by Habanos S.A. 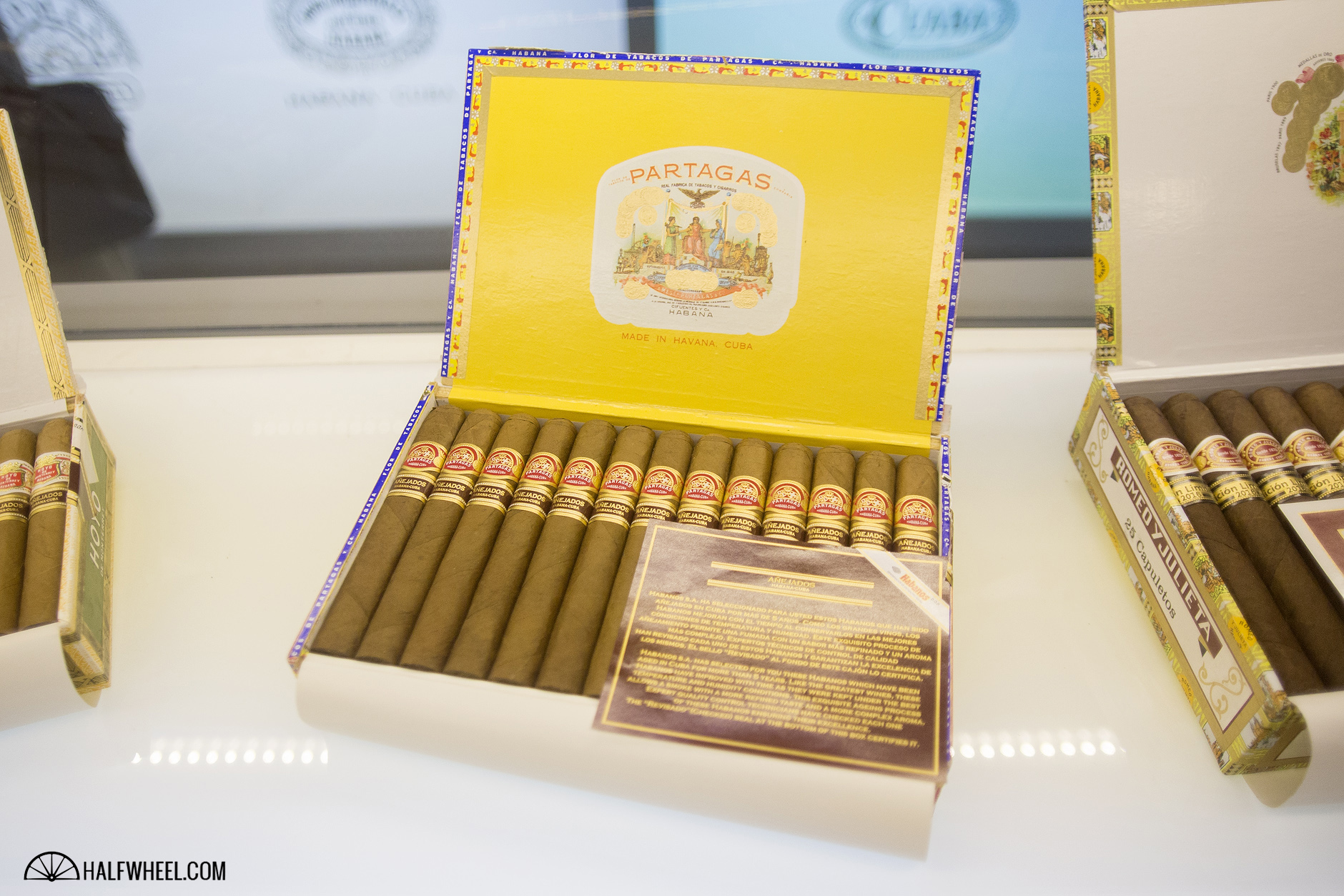 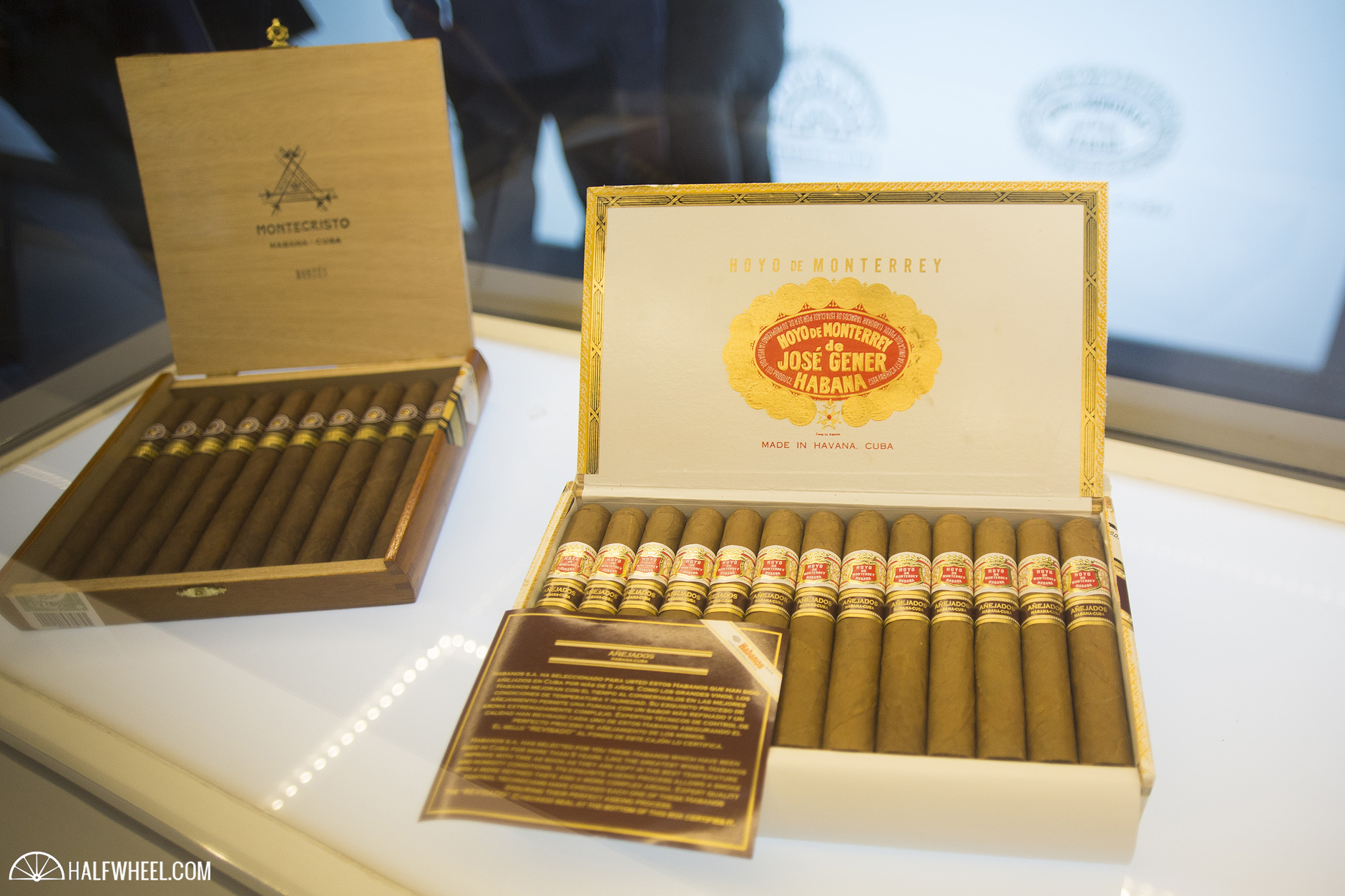 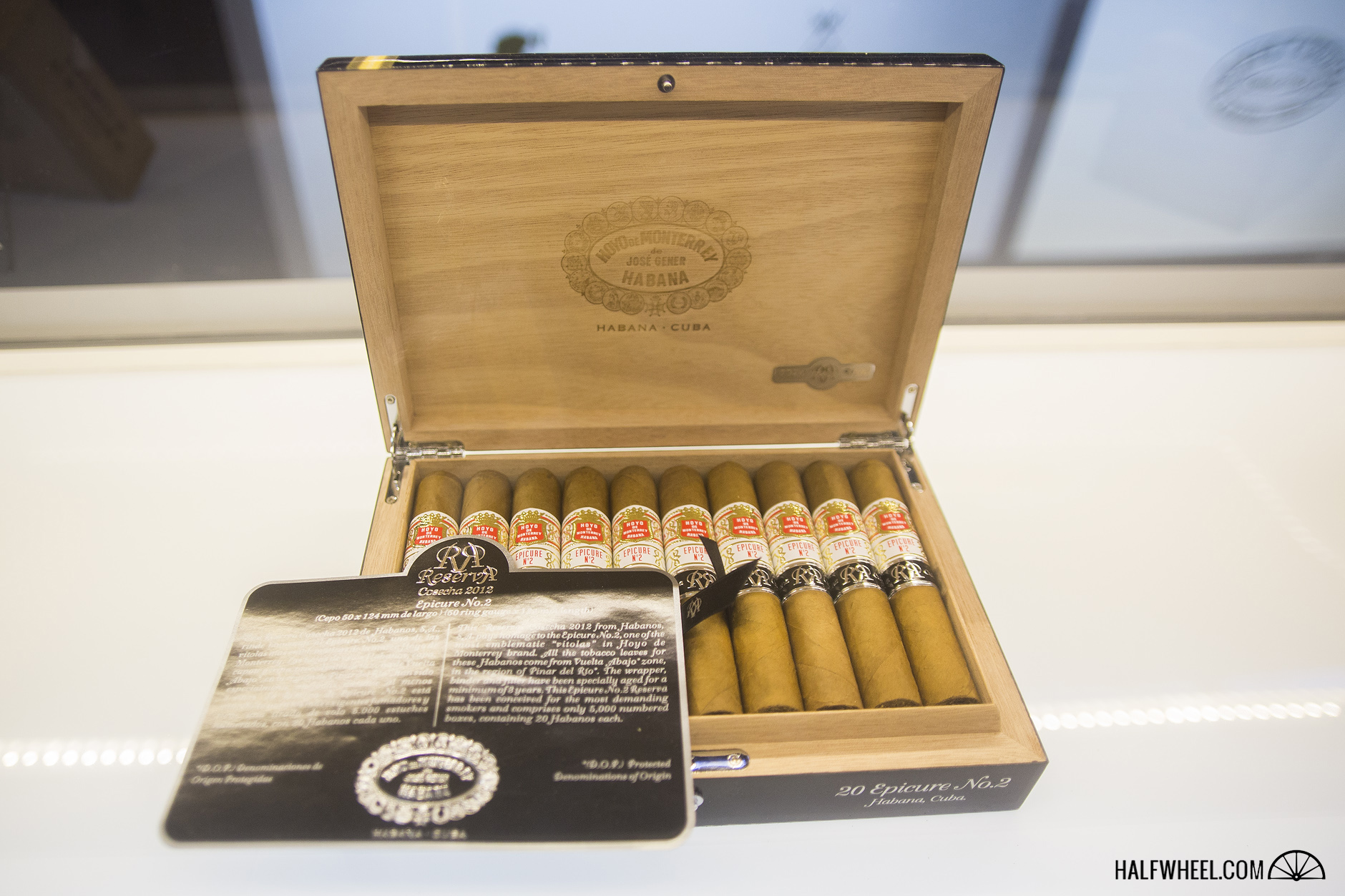 There were also some interesting humidor additions, including another Cohiba-branded humidor that included two different trays to hold cigars. 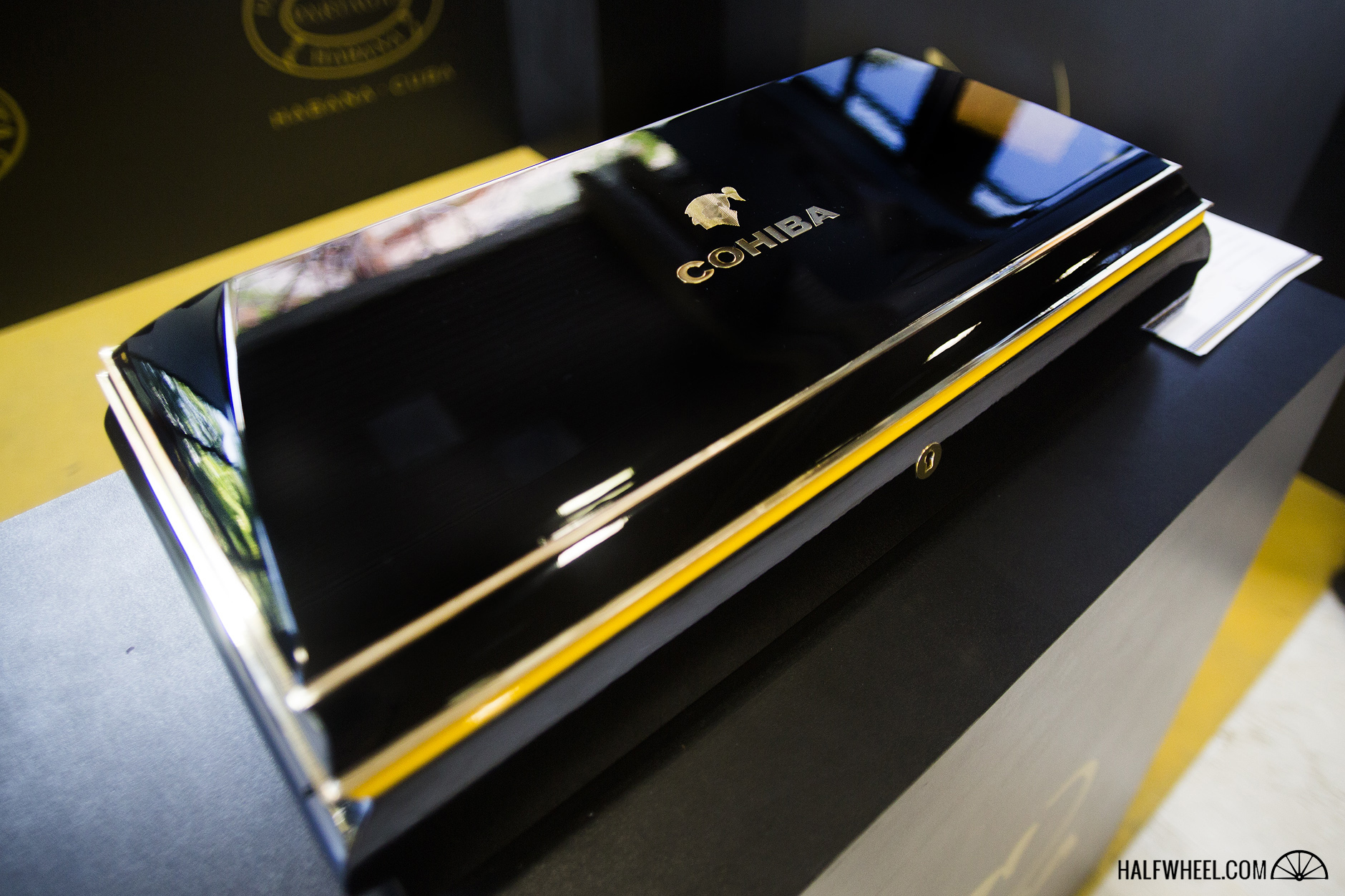 As was the case last year, there was also a cigar roller at the entrance to the trade show rolling custom cigars for attendees. The last official event of the night was the opening night gala, which was held at the Old Tobacco and Wood Warehouse in the Port of Havana. As the name suggests, the location is a restored warehouse that now includes a brewpub overlooking the port. 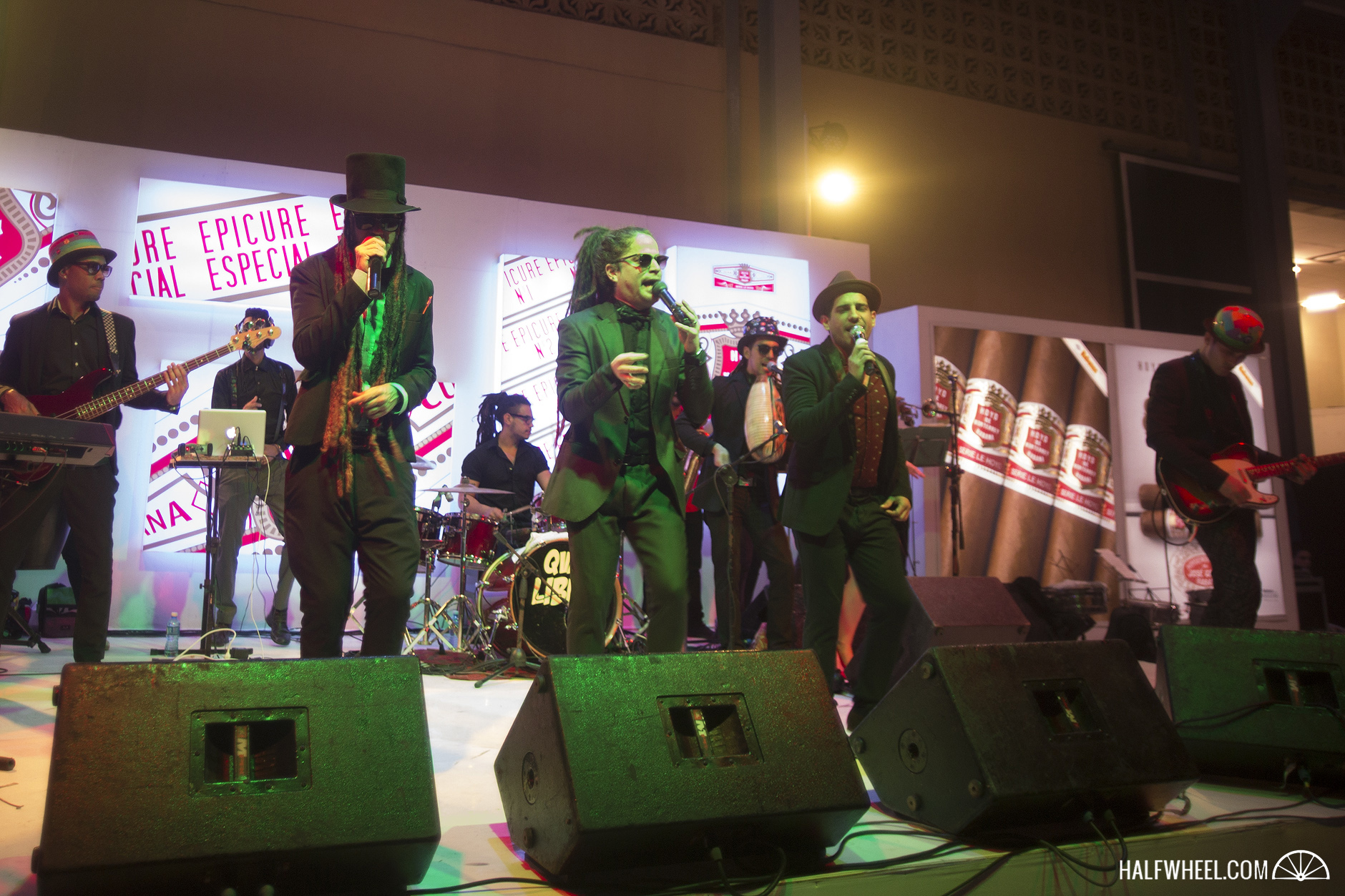 The location was excellent, and really had the room to show off everything Habanos was trying to accomplish. After showing up, the attendees entered and were handed roses as well as a gift bag which contained not only a special two-pack box of the new Hoyo de Monterrey Reserva Epicure No.2, but also a trio of other cigars to enjoy. After some greetings and a short movie, a special presentation of two dancers with light sticks took the stage, after which the attendees were ushered into the main staging area to eat. 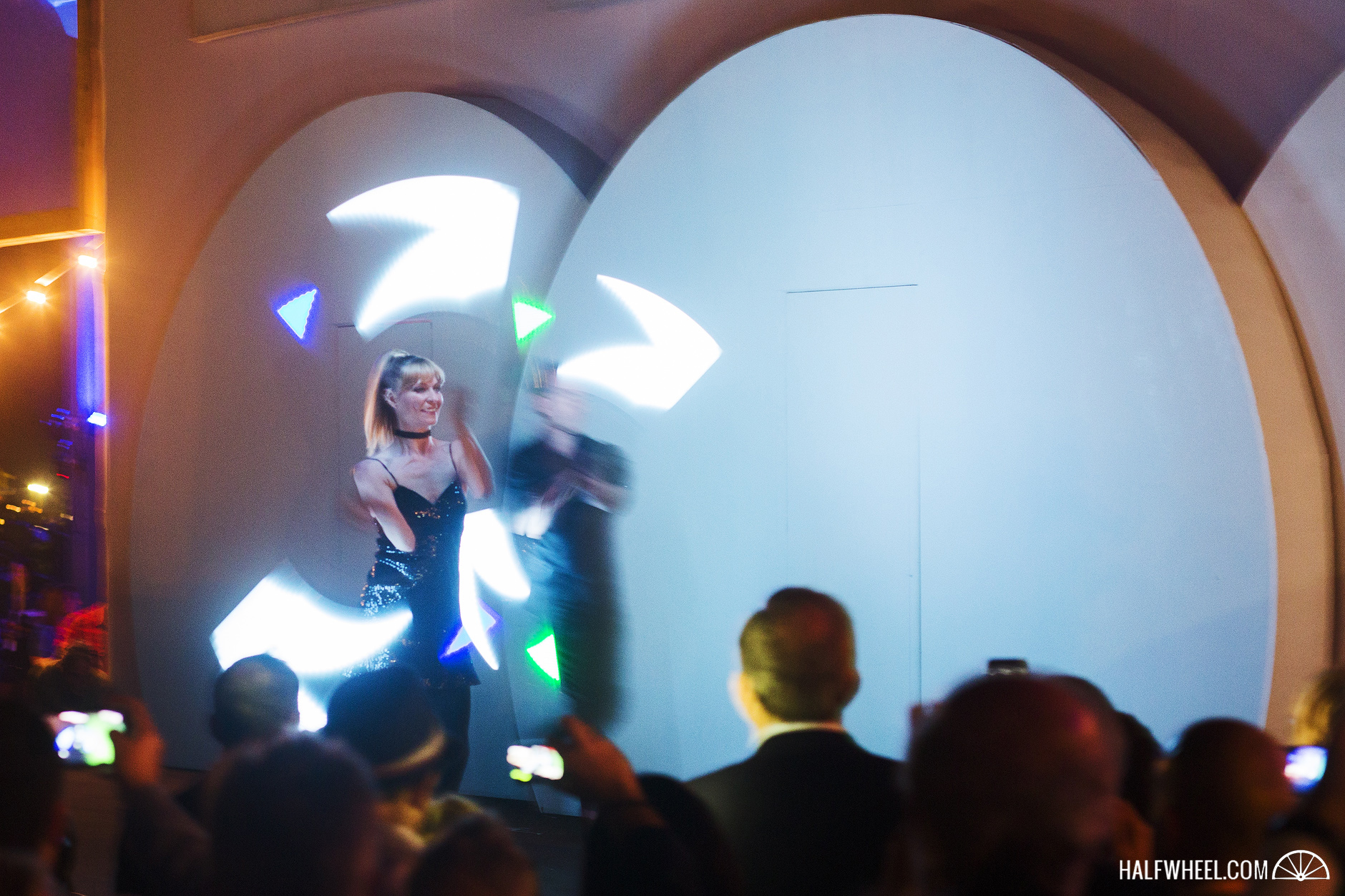 Along with the aforementioned beer, there were stations present at points around the outside of the building, with each station serving a unique drink to encourage people to wander around. After eating, drinking and dancing, the final act took the stage around 9 p.m., and the night ended with most people leaving by 10 p.m.

Coming tomorrow, a trip to the tobacco fields in the Pinar del Rio region.