After a brief welcome to the day by Habanos S.A. executives that reiterated a few of the points from Monday’s press conference, the first seminar focused on the 150 year history of Cuba’s cigar factory lectores.

From a historical perspective, the lector would sit on an elevated stage or chair and would read the day’s news and then a wide range of books, including Homer’s Iliad, Victor Hugo’s Les Miserables, 20,000 Leagues Under the Sea and Uncle Tom’s Cabin, and well as works from around the world. The readings led to strikes in some instances, as rollers heard the words of philosophers, anarchists, scientists, economists, businessmen and other thinkers and authors of the 19th and 20th centuries. Hugo was so moved that his book was read in the factories that he sent handwritten letters of thanks, which too were read to the rollers. Lectores earned their job for a number of reasons: certainly they needed an appealing voice, but they also had to have the ability to both select works that would be of interest to the rollers and then deliver it appropriately, with proper inflections and intonations to capture the intent of the author.

Three current lectores from H. Upmann, La Corona and Partagás shared the stage with Zoe Nocedo Primo, director of the Tobacco Museum in Habana Vieja. They began the seminar by ringing the same type of bell used in the factories to get the attention of the workers, as well as showing how rollers would show their appreciation for the materials by slapping their chavetas on the table instead of applauding.

It’s a position that seems almost completely unique to Cuban cigar factories, and it’s a position that remains active today. The layout of the factory was key in making the position stick, especially compared to other factories. The fact that the rollers performed their jobs quietly and while seated, with no heavy machinery to compete with, allowed the lector’s voice to carry throughout the room, especially in the days before microphones and sound systems. Even when radios became common, they were supplemental to the work done by the lectores, and often only to listen to live events such as baseball games or soap operas.

While the lector might not be one of the 200-300 hands that touches your cigar on the way from seed to ash tray, their importance to the Cuban cigar industry must not be overlooked. While rows and rows of rollers often numbering in the hundreds made cigars and dozens more workers cleaned the factory, delivered tobacco to the tables, moved cigars to aging rooms and supervised the operation, the lector’s voice carried both information and education to them, helping them stay current with the news while exposing them to some of the world’s best literary works.

Beyond that, the rollers would often discuss what was read that day with their friends and families, further helping to spread the ideas and knowledge throughout the country. As Ms. Nocedo said in her presentation, the lector’s voice carried for kilometers out of every factory.

There were also live readings and presentations given by philosophers, such as José Martí, the philosopher still revered on the island and beyond. As Cuba sought independence at the end of the 19th century, some of these speeches became instrumental in garnering support for the movement.

Of course, this was not a universally accepted and welcomed practice, as some factory owners frowned upon the practice, fearing it would cause uprisings among the workers or expose them to ideas in opposition to those they sought to promote. As has happened throughout the world, writers were sometimes killed for their works and their writings were banned from being read.

The celebration of the Cuban lectores was especially fitting this year, as the two featured brands both draw their names from literary works: Montecristo from Alejandro Dumas’ El Conde de Monte Cristo and Romeo y Julieta from William Shakespeare. The trio of lectores closed the presentation with a live performance of Romeo y Julieta, which brought the festival attendees to their feet in appreciation. A quick coffee and pastry break led to a master rolling class led by several rollers from Habanos S.A.’s factories; and suffice to say my rolling skills are still non-existent, to say it best. Let’s just say I’d be more suited to be a lector than a torceador. There were a good number of people in the room who managed to produce some impressive belicosos, including a guy who sat next to me who banged out one in a matter of minutes, then did it again blindfolded. 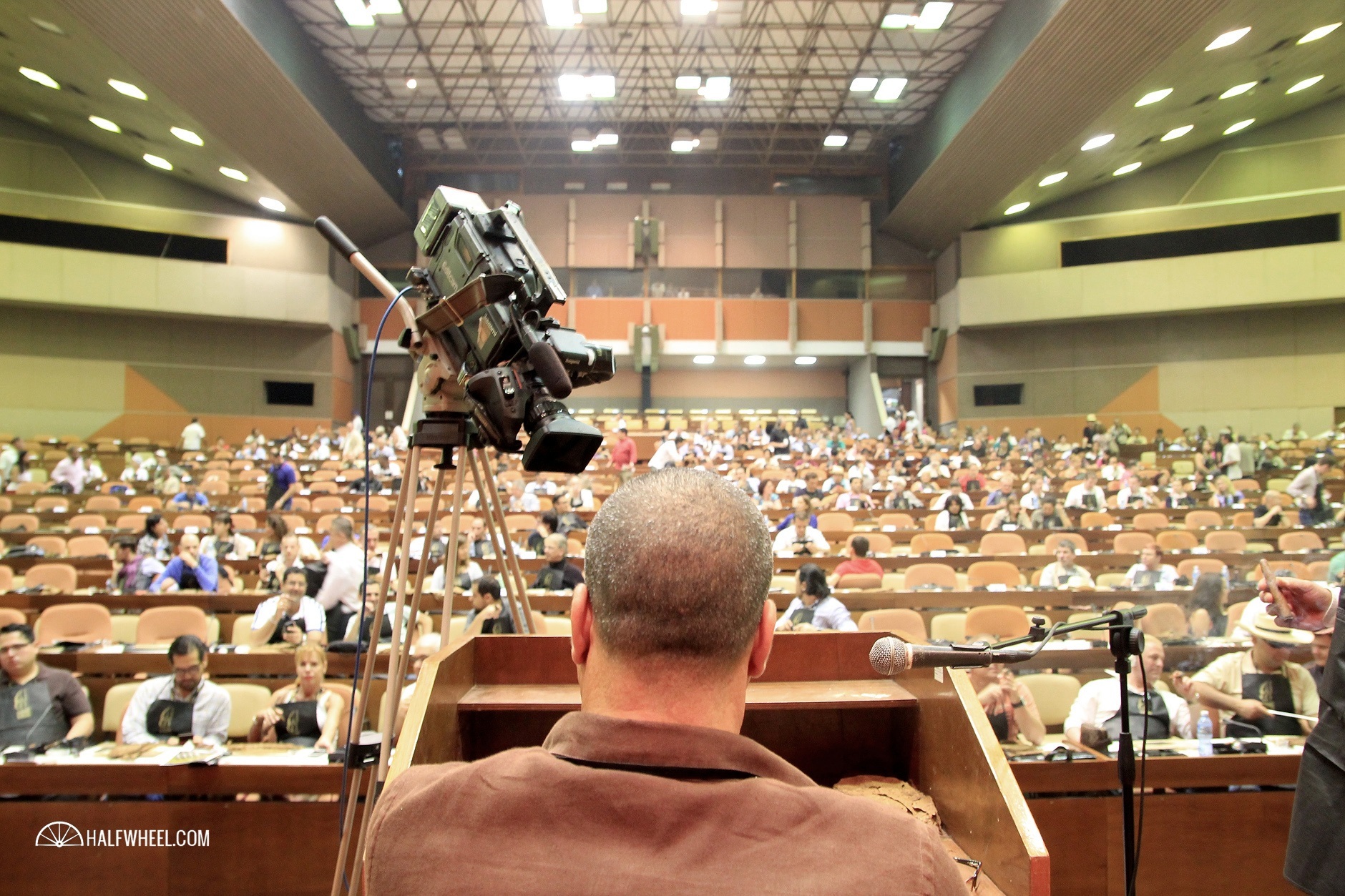 After lunch, it was back in one of the halls for a master lecture on the diversification of Habanos S.A.’s brands—in other words, how Habanos S.A. is taking its brands into areas beyond cigars and grow its customer base through expansion into other categories. For Habanos S.A., that means a three-pronged exploration: products, alliances and communication. For instance, some premium cigar brands have been expanded into cigarillos and cigarettes with other companies, while S.T. Dupont has made branded lighters and cutters, and still other companies have made accessories such as branded ashtrays and humidors. There is also a line of snus that use Cuban brand names such as Montecristo and Romeo y Julieta. Beyond tobacco products, there has been Edmundo Dantes-branded rum, Cohiba cognac developed with Pernod Ricard, Montecristo and Vegueros perfume, tie clips, cufflinks, ties, guayaberas, pens and much more. If you’re familiar with the Cohiba Atmosphere, you know one of Habanos S.A.’s most current projects, which encompasses smoking lounges, clothing, wine, and other products that aren’t cigars, including a new Havana Club rum that brings both names together as Ron Havana Club Cohiba Atmosphere Union (250 CUC) in a product designed to pair perfectly with Cohiba cigars, particularly the Siglo VI.

With that presentation wrapped up, I headed back over to the trade show floor, which as I’m quickly realizing is in need of a bit more space as while it is much smaller than IPCPR, it is much more crowded. The line about being able to roll a bowling ball down an aisle certainly doesn’t apply here. Among the things I have yet to see at the IPCPR Convention & Trade Show that I saw at the Habanos Festival trade show: a freezer full of lobster tail and other seafood courtesy of Caribex, a seafood import/export outfit. The Chianti wine booth was full of wine, and even the Cuban brand cigarillos and minis get Edición Limitadas, as Cohiba, Montecristo and Romeo y Julieta all had new releases.

The afternoon wrapped up with a pairing of cigars and Chianti wine from Italy—most notably on the cigar side was the new Hoyo de Monterrey Hoyo de San Juan and the Montecristo Open Eagle. In the evening, it was time for another celebration: the 25th anniversary of the first La Casa del Habano, with the party held at the legendary El Laguito factory. Throughout the Festival, it’s been repeated how important the LCDH franchisees are, as they are the flagship stores for Habanos around the world. As part of the festivities, two new La Gloria Cubanas were presented, a Piramídes and Robusto Extra, 15 of each in an LCDH exclusive that comes in an impressive humidor presentation. In addition to the new cigar, the evening was scheduled to feature the launch of the new Ron Havana Club Cohiba Atmosphere presented earlier in the day.