After a quick cigar and cup of coffee on my patio, I grabbed a taxi and headed to the day’s first event, a tour of one of Cuba’s most unique cigar factories, Real Fabrica de Tobaccos La Corona.

Formerly known by La Casa de Hierro, La Corona began its life located in one of the most famous buildings in Cuba due to its frame made of iron and steel, a technological marvel during its day. However, the location of the factory has changed several times before finally landing at its current location and is known as the home of the Romeo y Julieta marca. Incidentally, Habanos S.A. is releasing a new Romeo y Julieta vitola at the festival this year, the 3 3/4 x 47 Petite Royales, which will join the brand’s regular production offerings. After arriving at the factory, were were escorted into a small atrium that was open all the way to the top of the building, allowing us to see the the third floor. We quickly climbed the stairs to the first floor, where hundreds of teams were bunching and rolling cigars. Each floor was laid out in a square U pattern with the stairway and an elevator in the middle and just about every rolling station was full. There were quite a few men rolling, something that is a bit unusual in some factories, even at the El Laguito factory that I visited last year, where women dominate the numbers of people who apply wrappers to the cigars. There were also a number of rollers smoking—both men and women—and most of the cigars being smoked looked to have production bands. 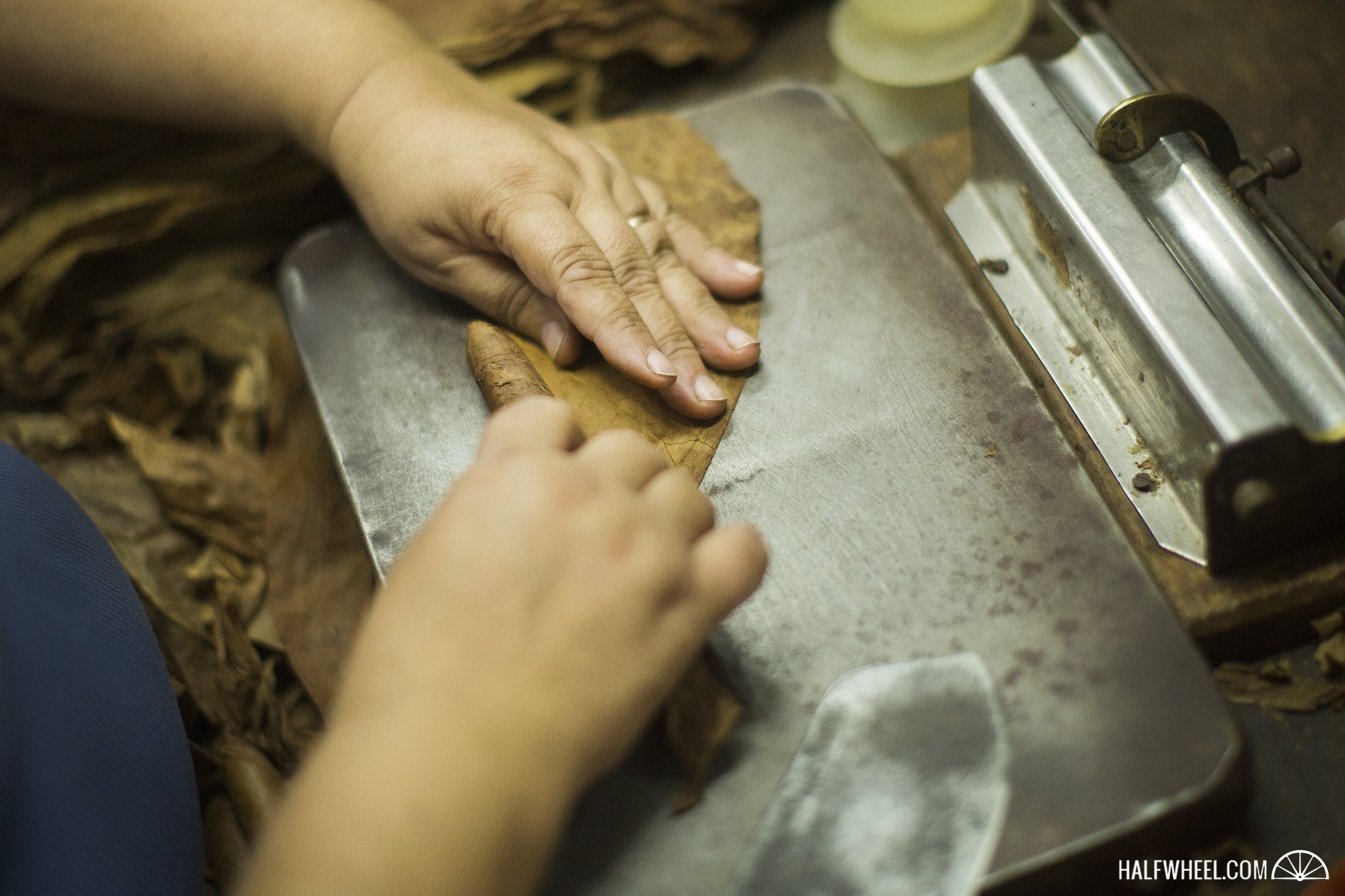 After the rolling room, we were escorted to the stripping room and the color sorting room before I got a bit sick of constantly tripping over other people in what looked to be four different groups and decided to see if I could sneak away into some other rooms. I have found that if you can get past the handlers who are with each group—and sometimes at doorways—the actual workers in the factory are more than happy to show you around some more unusual places. Knowing this, I slipped away and joined a group of workers in an elevator, which took me to the top level of the factory, where I was able to make my way into a cooling room filled to the top with cigars. As I wandered around, I ran across what looked to be some drawers that were being filled with cigars for one of the humidors that will be sold at Friday night’s closing gala. Sadly, both the blending room and basement were locked, so I decided to run back through the entire factory once again to see if there was anything I missed the first time due to the crush of people. As I was made it through the rolling room again, there was a woman sitting in a window that was not there before, someone I photographed from across the room with a long lens as she kept a watchful eye on everyone in that part of the factory. As was the case last year, I was offered cigars for sale right off of the rolling table, although only when I was walking alone without the group, or more importantly, the handlers. Prices ranged from 5 CUC to more than 15 CUC, and interestingly, since there were no bands in this part of the factory that I could see, I would just have to trust whatever they told me about what the cigars was correct, assuming the ring gauge and size match up. The rollers offering to sell cigars were always were nice, but never took no for an answer the first time, and a number of times I had to just walk away while they were talking or I never would have been able to get away. After touring the La Corona factory, I hurried back to the convention center so that I could attend another seminar, this time a pairing of Cuban cigars and rum. The products given to us were a Partagas Serie P. No. 2 as well as two of the four different rums that belong to Cuba Ron Corp.’s Isla Grande Collection: Extra Seco and Extra Anejo 15 Years. The panel was chaired by Juan Escalon and Jorge Cardoso, who are the president and export manger for Cuba Ron respectively, as well as Cuban master rum makers Cesar Augusto Marti and Julio Ayan. The four took everyone in the room through not only the process of making rum, but also the thought process behind pairing specific rums with specific cigars, and how to look for an ideal combination. While I enjoyed the Extra Seco, the combination of the Extra Anejo 15 Years and Partagas Serie P. No. 2 really sang, and was quite enjoyable as I listened to the rest of the program. 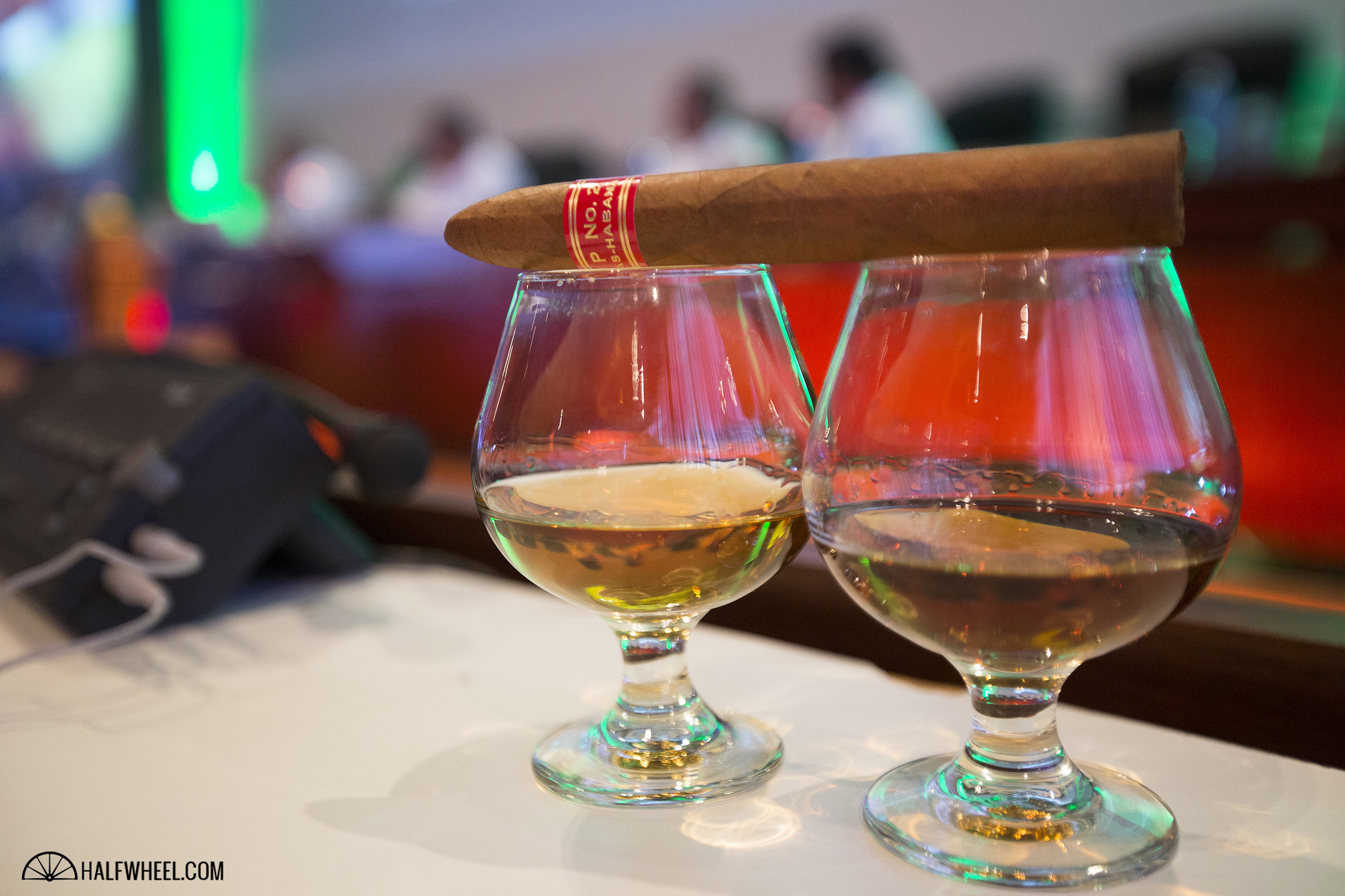 After that was over, there were no other scheduled events, so I took a taxi to the old part of Havana to shoot some street photography for the last post.