The U.S. Food & Drug Administration (FDA) has released its calculations for user fees for tobacco products for 2017 and the cigar industry will owe less than expected.

User fees are paid to FDA to fund the agency’s operations, specifically the Center for Tobacco Products (CTP). In total, tobacco companies will pay $635 million in user fees next year to fund CTP, something that was already known. What’s changed is how much each company will owe.

User fees are to be paid by six different types of tobacco products: cigarettes, roll-your-own tobacco, snuff, chewing tobacco, cigars and pipe tobacco. Because FDA only recently started regulating cigars and pipe tobacco, the other four categories have been responsible for funding the total user fee bill in previous years, something that will change in 2017.

Each year, the agency calculates how much each product category owes based on the percentage of excise taxes paid by each category. For cigars, these excise taxes are commonly known as SCHIP. 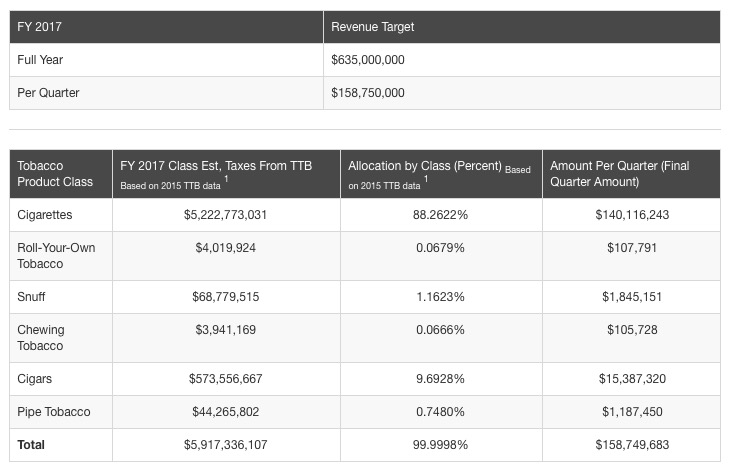 The $573.6 million number represents just under 9.7 percent of the total $5.9 billion paid in federal excise taxes by these tobacco products in 2015, meaning cigars are liable for $61.5 million of the total $635 million CTP will get from user fees.

It should be noted that not all cigars pay the full 40.26 cents. Cigars that retail for less than $2 likely pay less than 40.26 cents as the actual tax is 52.75 percent of the wholesale price capped at 40.26 cents per cigar.

E-cigarettes are not part of the user fee calculations because it was not explicitly mentioned in the Family Smoking Prevention and Tobacco Control Act.