During the 2017 IPCPR Convention & Trade Show, My Father Cigars showed off a brand new box-pressed extension to the company’s core My Father line. The regular production line is named La Opulencia—Spanish for the opulent—and is an old Cuban trademark that the Garcias revived specifically for this release.

Blend-wise, the My Father La Opulencia incorporates a Mexican rosado oscuro wrapper covering a dual Nicaraguan binder featuring both criollo and corojo leaves, along with Nicaraguan tobacco in the filler. The regular production release is packaged in boxes of 20 and is being rolled at My Father S.A. factory in Nicaragua.

The La Opulencia line launched with six different vitolas, all packaged in boxes of 20. 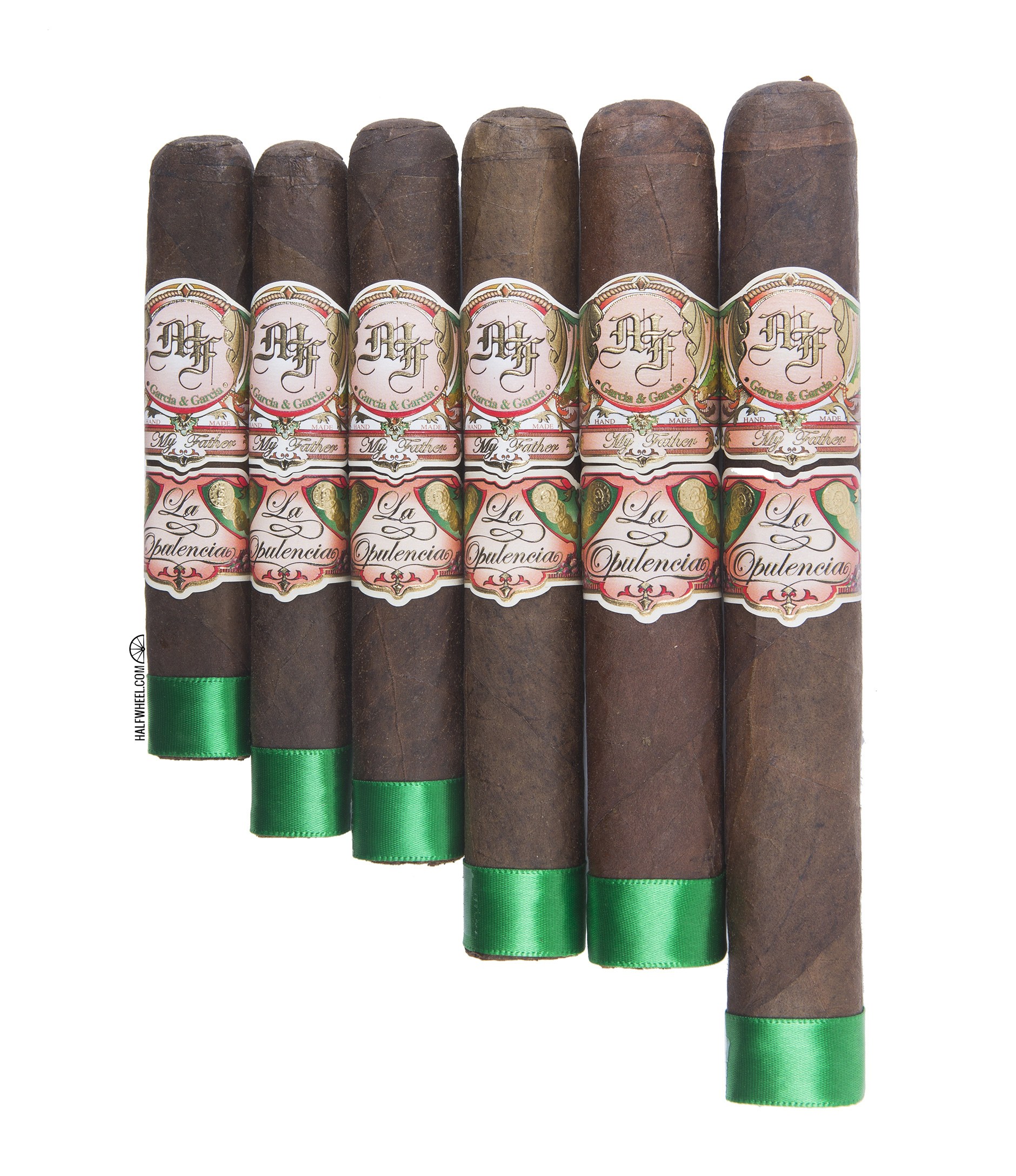 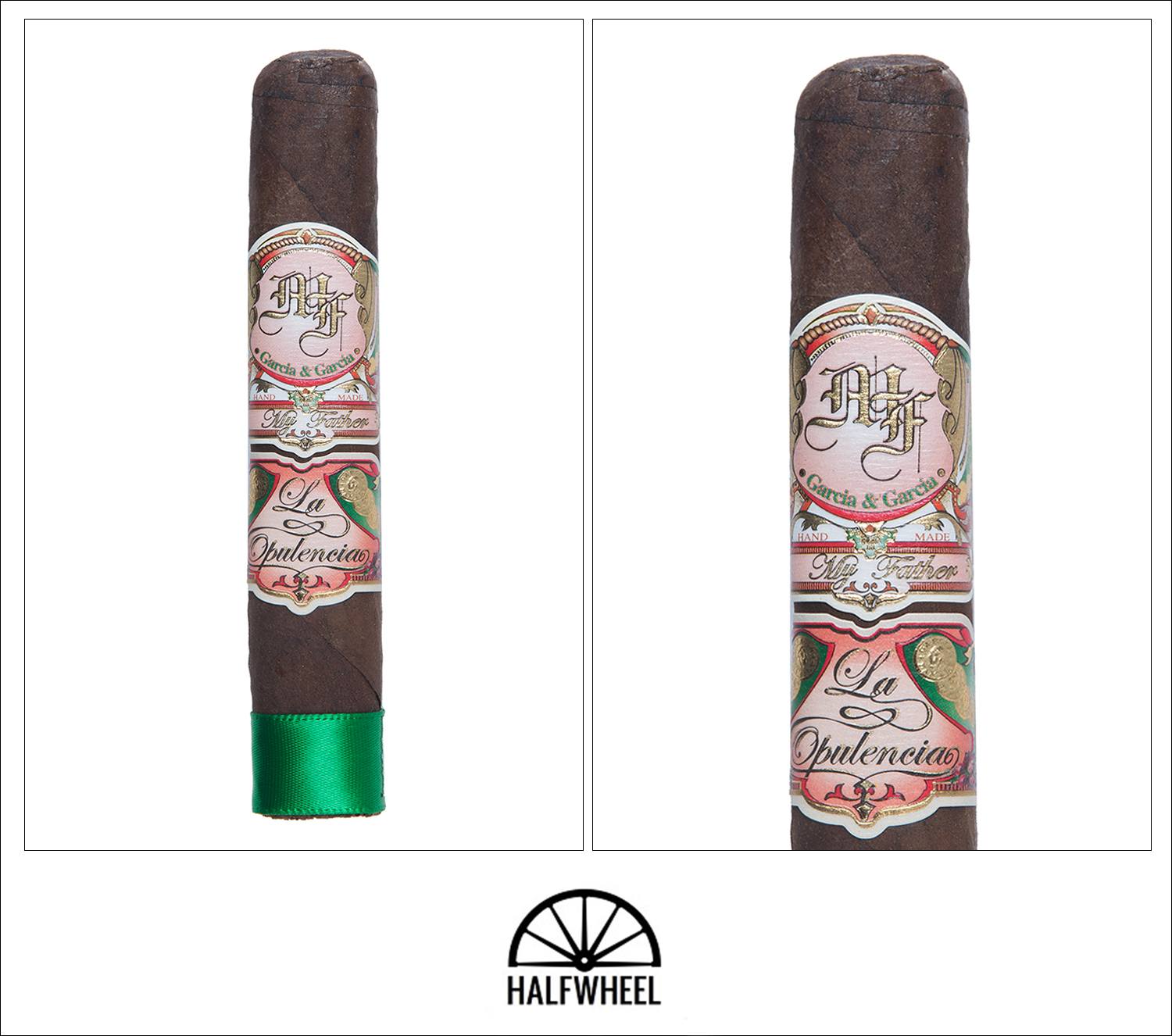 The My Father La Opulence Petite does not really live up to its vitola name, and is not exactly that petite in my hand, although the large amount of real estate taken up by the three bands does make it difficult to see anything about the actual cigar. However, once I remove the foot band, a dark espresso brown wrapper is reveled that has a bit of tooth to it as well as a hint of oil. Although far from extreme, the cigar is very obviously box-pressed, and has some nice give when squeezed. Aroma from the wrapper is a combination of strong dark cocoa, oak, leather, manure, hay, peanuts, generic sweetness and black pepper, while the cold draw brings flavors of cinnamon, earth, graham cracker sweetness and a touch of varnish.

Starting out, the My Father La Opulencia features a distinct core of both leather and earth, followed by other flavors of creamy cedar, bitter espresso beans, baker’s spices, straw and a touch of citrus. There is a nice amount of vanilla bean sweetness noticeable as well as just a bit of spice on my tongue, but I am a bit surprised by the lack of black pepper that I am tasting. Construction-wise, the draw is excellent so far after a simple straight cut, and while the burn is nowhere close to razor sharp, it is also not close to needing a correction just yet. The smoke production is massive off of the foot and the strength ends up at a point between the mild and medium marks by the time the second third begins. 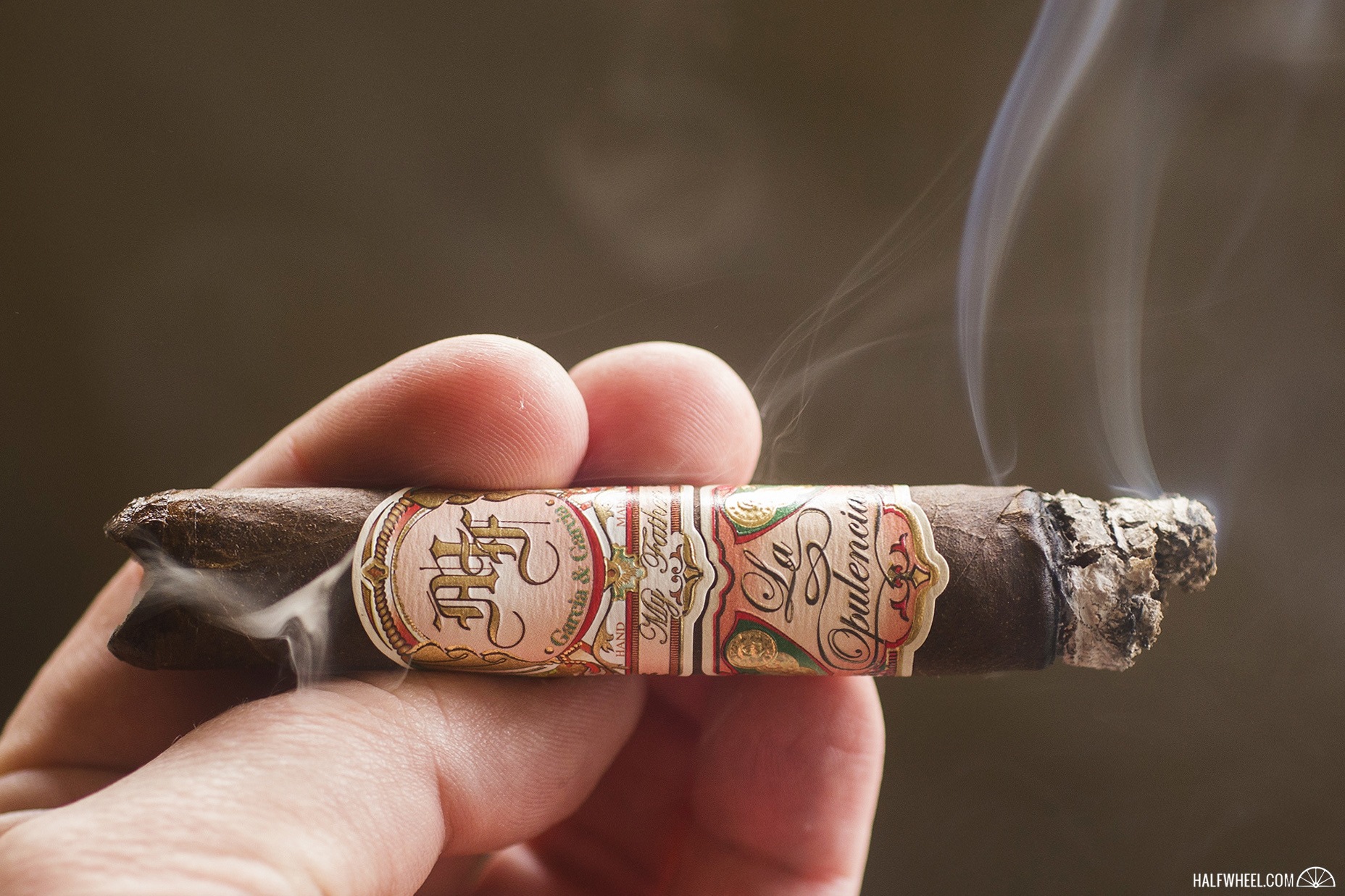 Coming into the second third of the My Father La Opulencia, and while the earthy core that was so prevalent in the first third continues to dominate, a cinnamon note that was present in the cold draw is gaining ground. Other notes of leather, creamy oak, brewed coffee grounds, lime and a touch of floral flit in and out, while the vanilla bean sweetness has receded quite a bit, as has the spice that was present on my tongue. The draw continues to impress, and while the burn was touched up once, it was never close to getting out of hand. The overall strength easily hits the medium mark by the halfway point, but seems to stall out there, while the smoke production shows no signs of decreasing anytime soon. 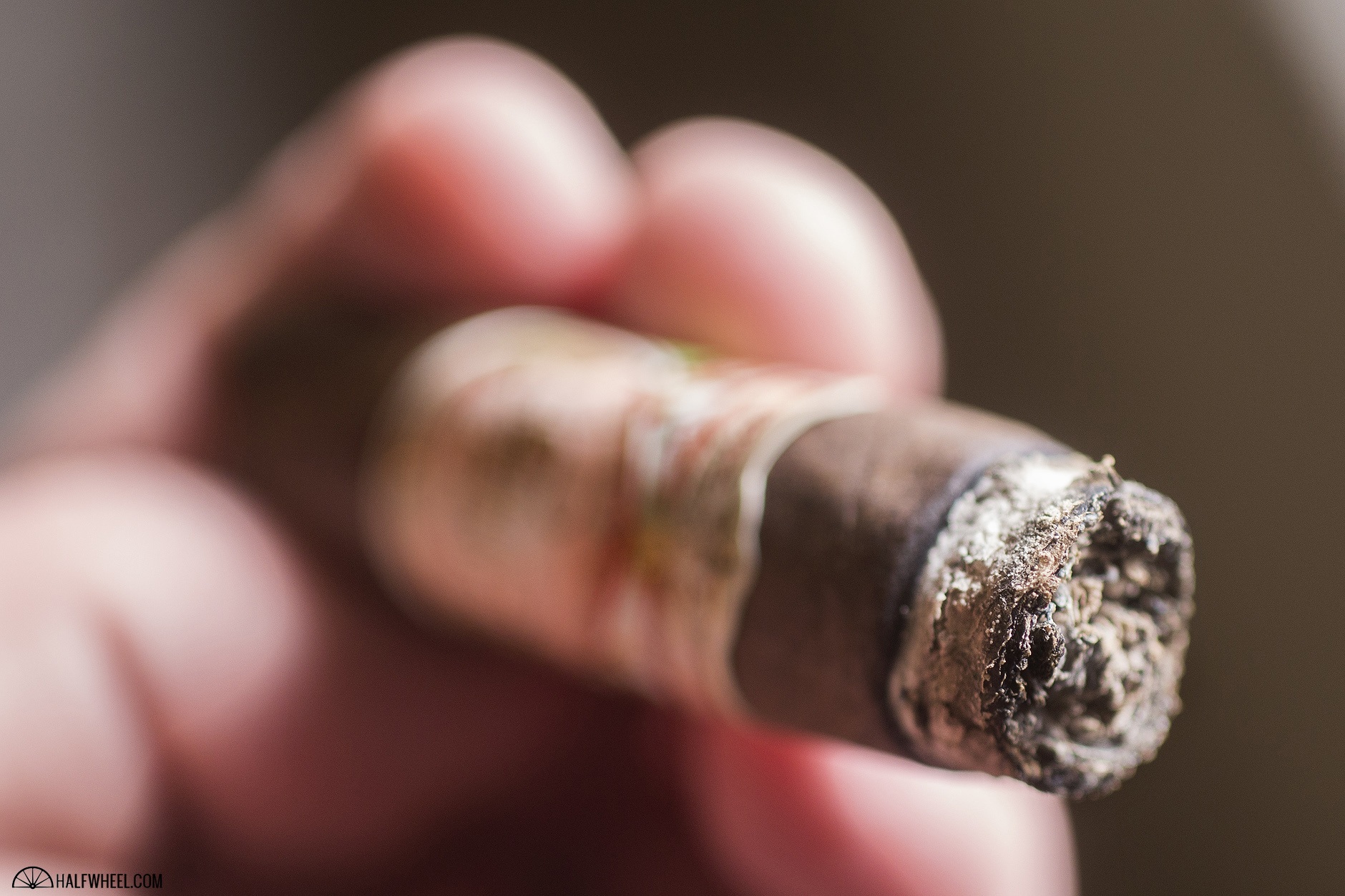 Thankfully, the final third of the My Father La Opulencia starts out quite similar to the first third, but soon takes a turn, with the dominant earth and leather notes morphing into more of a creamy oak, followed closely by hay , dried tea leaves, dark cocoa, barnyard and anise. The vanilla bean sweetness has increased as well, close to the levels of the first third and while the black pepper on the retrohale remains noticeable, the spice on my tongue is long gone. The burn has evened up nicely and the draw is as good as ever, while the smoke production continues to be well above average. The overall strength has increased noticeably from the second third, and I put the nub down with less than an inch left with it solidly between the medium and full range. 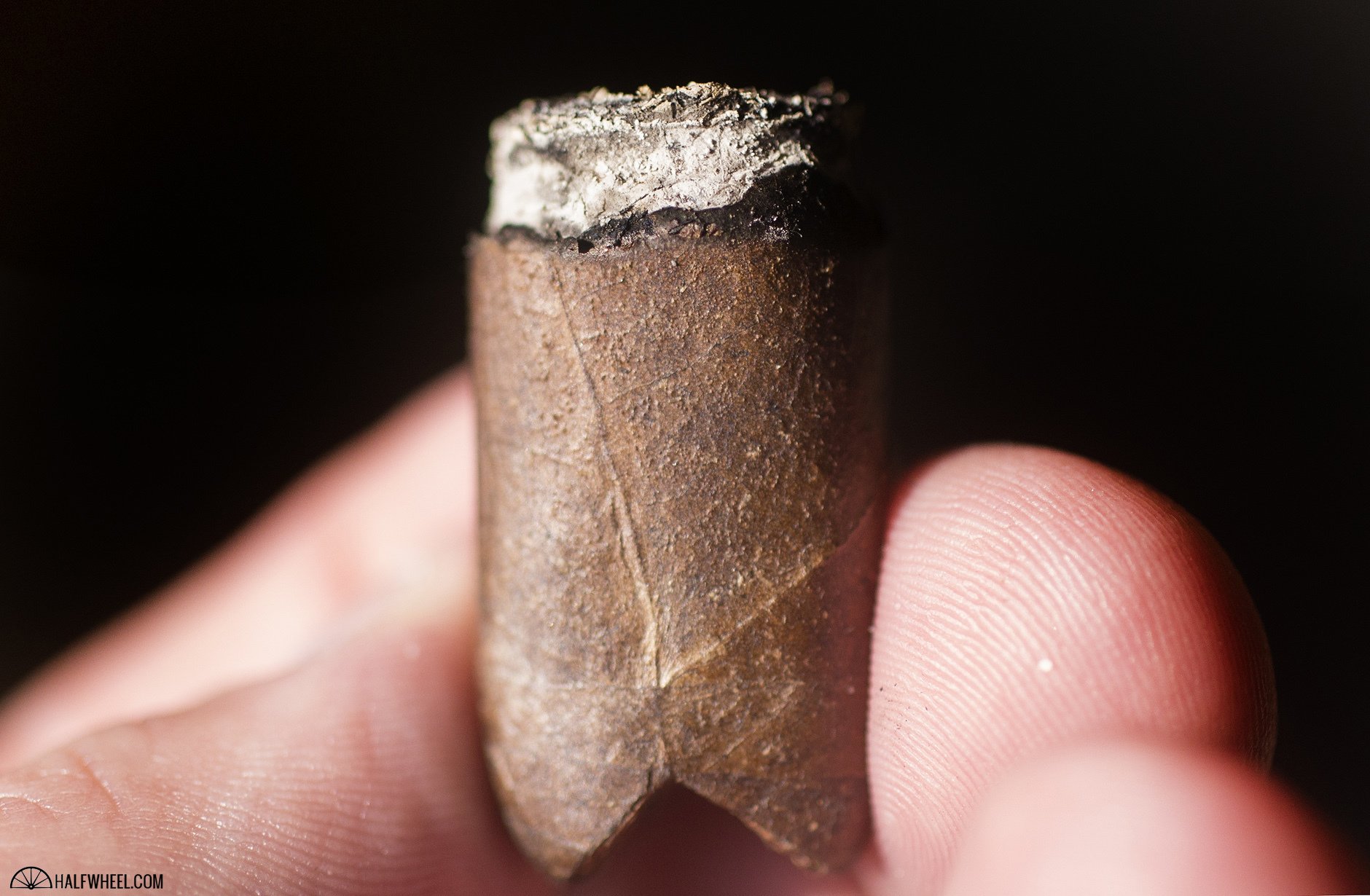 There are perhaps a dozen cigar companies that I will make an effort to eventually try every single new blend they release, and My Father is one of them. The La Opulencia is an extremely smooth blend, with a profile that features a medium-full strength and dominated by core flavors of both earth and leather, along with a slight vanilla bean sweetness that comes and goes throughout. In addition, the construction was quite good overall and there was a somewhat surprising lack of pepper on either the retrohale or finish, especially for a My Father creation. There are a number of things to like about the La Opulencia and it is a very easy cigar to recommend trying, but My Father makes a number of blends that feature a more complex profile.