The banging gavel, the black robe, the issuance of justice and punishment, all things we associate with a judge. My Father is hoping you’ll associate big bold flavors and a pair of thick, box-pressed cigars with the word as well.

Released at the 2016 IPCPR Convention & Trade Show but not fully rolled out until late November, My Father’s The Judge is an extension to its core line with promises of being more full-bodied thanks to an Ecuadorian Sumatra seed wrapper over a dual binder of Nicaraguan criollo and corojo leaves, with the filler coming from three My Father farms in Nicaragua, La Bonita Two, El Pedrero and San Rafael. The name of the cigar is inspired by a friend of the Garcia family, who is a judge, fittingly. It is offered in two beefy and box-pressed sizes, a 5 x 60 ($12.40) and 6 x 56 ($12.10), both coming in 23-count boxes adorned with a Victorian-era lithograph said to be from around 1905 that features a man rather formally dressed in a bow tie and smoking a cigar. I hate the term candy bar when used in reference to cigars as much as any term, but in the case of the My Father The Judge, it does seem a bit appropriate. The box press and rounded head give it a distinctive shape, while this particular shade of wrapper isn’t the color of a judge’s black robe, but rather lighter than most chocolate bars you’d find on shelves, but works in conveying the comparison. The ribbon foot band has become a more regular sighting on a number of cigars, and My Father has used it a number of times as well. While a good bit of it is covered up by two paper bands and the fabric foot band, the wrapper offers a fantastically smooth feel to the fingers aided by a light sheen of oil. The foot offers a peppery lead aroma that is rounded out by damp wood barrels, a bit of earth,  chocolate and a sharp note of cold coffee that seems to be on the acidic side. The cold draw is much more subdued and almost sweet in the sense of toffee and a bit of blueberry, though pepper does come through on the lips after a few tugs, backed by a bit of espresso.

It shouldn’t be a surprise that The Judge puts out a good amount of smoke shortly after being lit, thought the burn line seems to be in no rush to make its way up the cigar. While I wouldn’t call it a creamy start, there is certainly some creamy undertones to the subtly sweet earth and just a touch of smoky darkness, with a pork note coming along after that. It’s by no means an explosion of pepper, but the complexities are impressive and make it known fairly quickly that it will be worth paying attention to the cigar’s intricacies. The burn line continues to crawl as with 45 minutes elapsed I’m still in the first third—including samples that need a touch up or relight—and now it has gotten a bit uneven. In the third sample, which got a bit of dryboxing, the flavor is a bit lighter and shows creamy peanut butter at the end of the first inch, something that makes me like the cigar even more. Ash flakes off a bit and is more distraction than anything, though the core clump of ash holds on quite well before the flaking leads to a crack and subsequent departure. Pepper becomes a bit more noticeable, increasing its tingle on the senses as the flavor lightens up a bit as sweet cream grows in intensity as the burn line creeps into the second third and towards the secondary band. 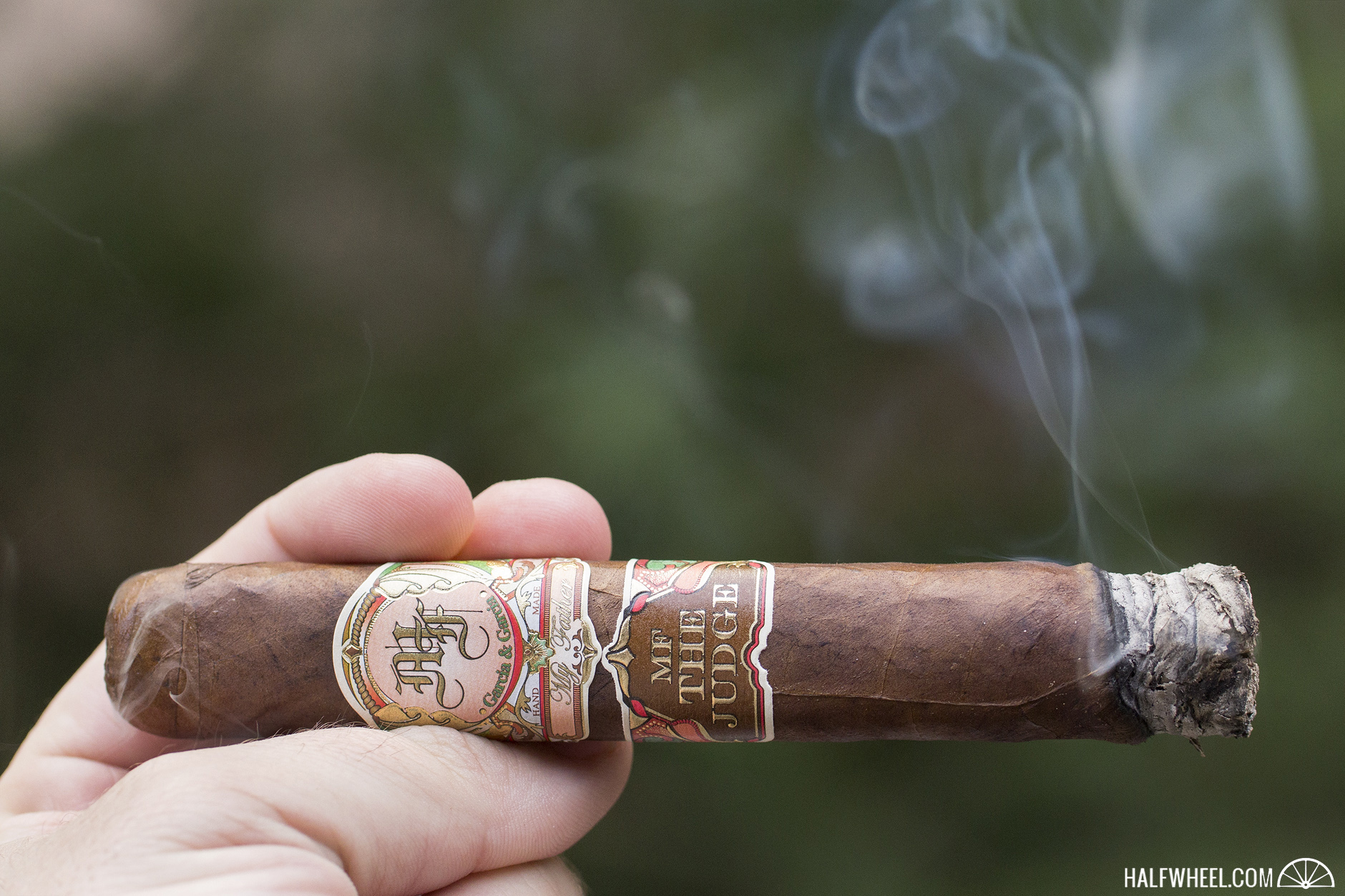 Out of the creaminess and what seems like a touch of oiliness associated with the peanut butter flavor comes a different spin on the earthiness, as The Judge now tastes much more of clay and soil, lighter and more distinct but also a bit sharper and more defined on the palate. A huge hit of pepper gets introduced at the midpoint, the first real appearance it has made, and gets right to work on unsuspecting nostrils via a retrohale and then via the ambient air, while also giving the palate a hearty dose to boot. The middle third has been shown an interesting back-and-forth in terms of strength, something that intrigues me given The Judge’s billing as being a fuller cigar than the My Father core line, which I find to be already fairly full. The Judge begins a slight pivot towards a more robust profile, as the pepper gets a bit scratchier on the tongue and throat, and the nicotine level nudges up a notch or two. There have been some combustion issues in this section as well that have hampered its progress. 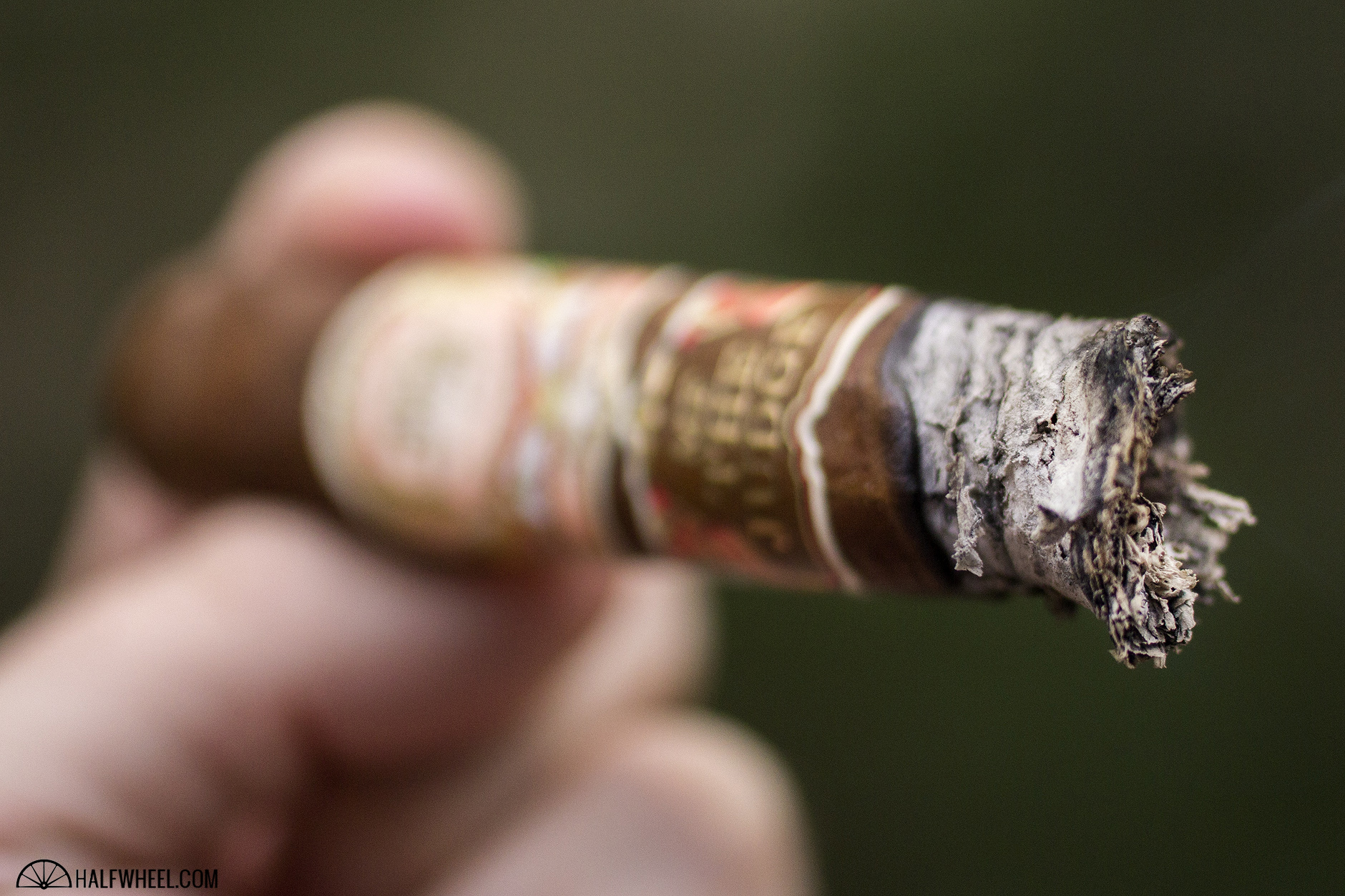 The creaminess is long gone by the start of the final third, as The Judge seems the heartier Nicaraguan tobacco has taken the driver’s seat of the profile, and put it on par with the My Father core line in terms of strength, if not nudging it slightly past it on certain puffs to live up to its billing. It’s also begun to get a good bit stronger in terms of nicotine, a dual-pronged approach to kick itself fully into the full-bodied and full-strength realm. Retrohales are the more pepper-packed way to engage the cigar, while each puff seems to hit further and further back in the throat, almost reaching into the top of the chest at its most potent. Sadly, burn issues continue into the final third, further slowing the smoking time and adding a bit of frustration, though the flavors survive each relight. The peanut butter flavor from earlier returns for some welcomed sweetness in the last two inches, manifesting along the lines of Nutter Butters with some vanilla cookie added on this encounter. Some rough, rocky pepper closes out the cigar as the time nears the three-hour mark and the burn line tries to stay relatively even. Much like judges get reputations, The Judge came with a bit of a reputation of being a full-bodied big vitola of a cigar. There are certainly plenty of points where it lives up to that billing, but there are a number of other spots where the cigar is pleasingly medium-bodied, creamy and even sweet in a subtle and tempered way. The Judge offers more complexity than I would have given it prior to smoking several samples, while the transitions are smooth and logical without being boring. Burn issues hampered this cigar a bit, something that has been written about too many cigars coming out as of late, and something that will hopefully get resolved with future batches. While I'm not crazy about the size and would welcome seeing this blend in something slimmer, the box-press and flavor profile more than made up for my objection to it.