The 2018 IPCPR Convention & Trade Show featured a number of new releases for Drew Estate, but one of the more interesting announcements from last year’s show was a line of bundle cigars named Factory Smokes by Drew Estate. Each of the four blends available so far being sold in the same four vitolas, although each blend uses a different wrapper that covers an Indonesian binder and mixed fillers from Indonesia: Sun Grown, Maduro, Shade and Sweet.

“Our expansion in the bundle business was a decision we did not take lightly,” said Jonathan Drew, the company’s co-founder and president, in a press release. “Bundles aren’t glamorous and the efficiency required to produce them effectively is not easily reached, which is why there aren’t a ton of entrants innovating in the value priced space. This is long overdue for Drew Estate, and when we reached the production scale required to compete we knew we wanted to do what we do, and disrupt the space with an innovative, deep value line of quality smokes for a broad set of thrifty individuals.”

All of the cigars are rolled at La Gran Fabrica Drew Estate in Nicaragua, and each of the lines is packaged in bundles of 20:

Here is what I said in my original review almost one year ago:

I am always on the lookout for blends to recommend that rise above the respective prices being charged for them, and that is a very good way to describe the Drew Estate Factory Smoke Sun Grown to those who have not tried it yet. No, it is not going to blow you away with flavors or complexity, nor is not the most interesting of profiles, but the construction is decent enough and it features a price that is tough to beat. In the end, the Factory Smoke Sun Grown is both better than most people will expect and better than the price that is being charged for them. 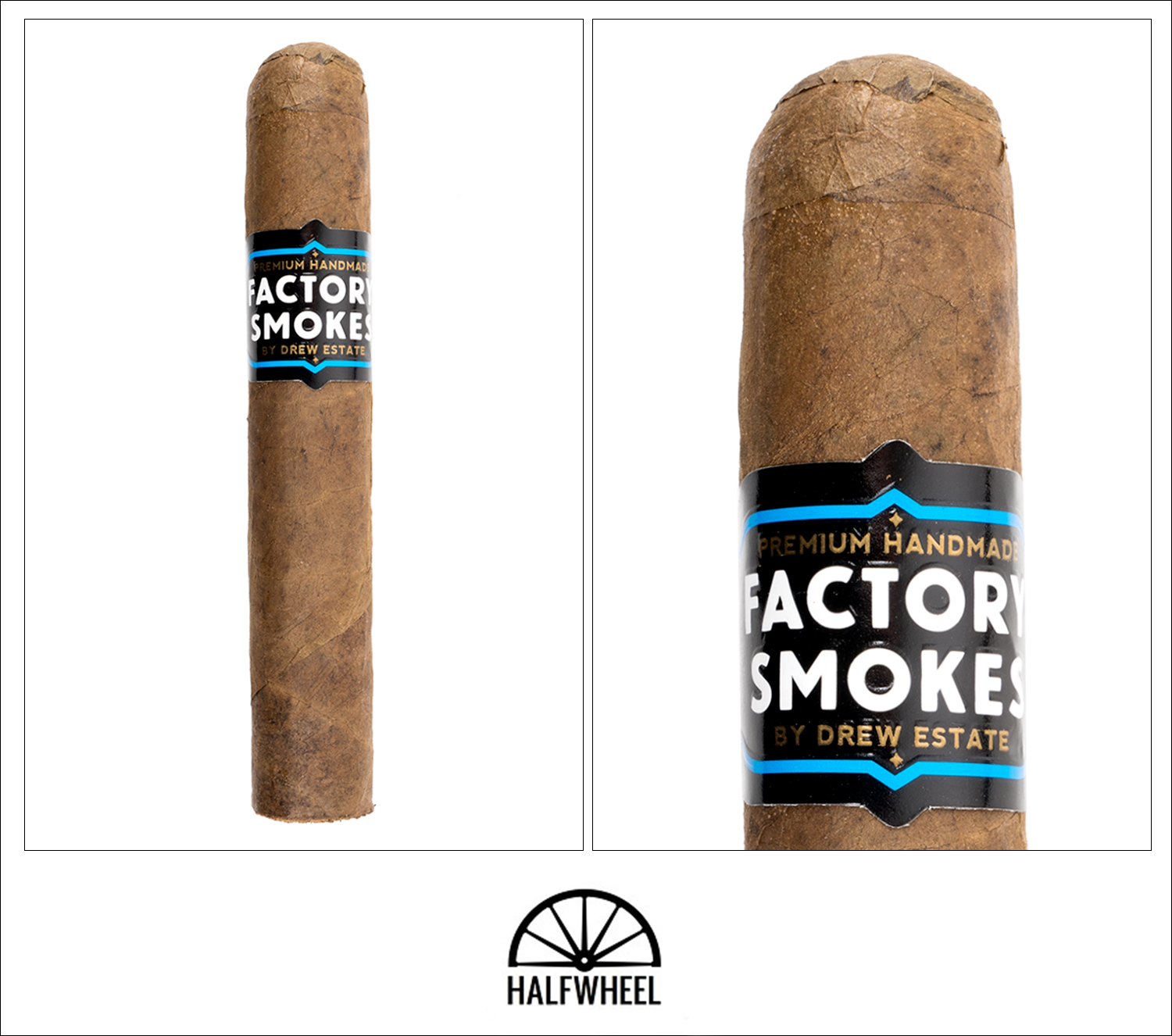 As with the first samples, the Factory Smokes Sun Grown by Drew Estate Robusto features quite a few attributes that immediately bring to mind a budget smoke: the muddled brown parchmentesque wrapper has almost no oil noticeable at all, the cap seems to have been hastily applied and there are soft spots up and down the length of the cigar. In addition, there are a multitude of very prominent veins running up and down the length of the cigar and it is extremely spongy when squeezed. Aroma from the wrapper is a combination of strong and distinct dark chocolate, cedar, generic nuts, earth and raisins while the cold draw brings flavors of sour earth, cedar, leather, bitter chocolate and slight mocha coffee sweetness.

After toasting the foot, the Drew Estate Robusto begins with a very distinct dark chocolate flavor seemingly pulled directly from the cold draw that dominates the palate, along with other flavors of cedar, bitter espresso, cinnamon, earth and a slight peanut. There is a small amount of white pepper and floral sweetness on the retrohale, as well as some spice on my tongue, but seem content to stay at their current strength at the moment. The finish is both dry and slightly sour, a note that does seem to be increasing in strength the cigar continues to burn down. There is a touch more floral sweetness and less spice and white pepper on the retrohale in the second half of the Factory Smokes Sun Grown, and while the profile is still dominated by the same dark chocolate note, the finish is full of noticeably more of the same sourness that started showing up in the first third. Other flavors of cedar, peanuts, bread, cinnamon, and leather flit in and out as well, but none of them come close to becoming a dominant force in the profile at any point.

Considering the issues I had with construction the first time around, I am not surprised that the Factory Smokes Sun Grown features an extremely loose draw after a simple straight cut—despite the very small amount I cut off of the cap in anticipation of the issue—but the virtually trouble-free burn did have me do a double-take at times. Smoke production was extremely copious and extremely thick for the entire cigar, but the overall strength failed to hit the medium mark by a pretty wide margin by the time I put the nub down with about an inch remaining.

The Factory Smokes Sun Grown by Drew Estate Robusto is one of those cigars I knew I was going to do a redux on immediately after finding out I was reviewing it. Would an extended period of time in a well-humidified environment make all the difference when it comes to increasing the quality of the smoking experience for a bundle cigar, or would it just become another mushy mess that should be smoked immediately? It turns out that the answer is somewhat of a mixed bag, with a profile that changed significantly from a dominant earth flavor followed by cedar and hay in the first samples to a dominant dark, bitter chocolate note interspersed with earth and nuts along with a new floral note in the latest sample. However, despite a noticeably better burn, the sourness that was mostly relegated to the cold draw the first time around is quite a bit more pervasive as part of the actual smoking profile in this newer sample, which essentially destroyed any semblance of balance that the cigar may have had.