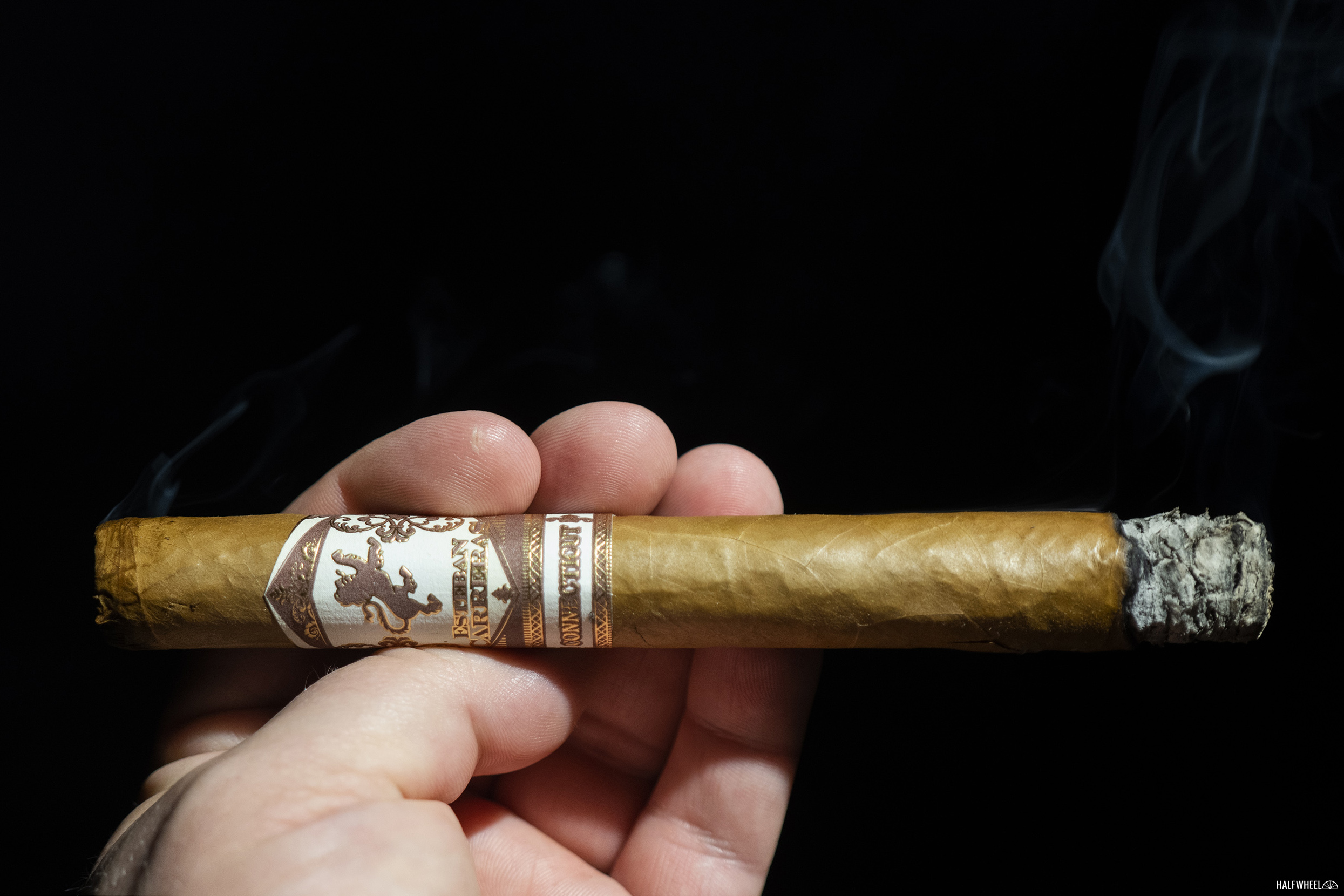 Many cigar companies make it a point to give fans as much information as possible about new releases before they ship to retailers—sometimes long before that—but there are always a small number of new products that buck the trend.

Such was the case with a new milder offering from Esteban Carreras named Cashmere, which suddenly started showing up on shelves early last month. Rolled at the company’s Tabacalera Carreras factory in Nicaragua, the four-viola line features a blend made up of an Ecuadorian Connecticut wrapper covering binder and filler tobaccos sourced from Nicaragua.

In addition, while the Churchill, Toro and Sixty vitolas are sold in boxes of 20, the 4 3/4 x 46 Boolit comes packaged in boxes of 32 cigars.

There were four sizes in the new Cashmere line when it debuted last month. Covered in a pale golden brown wrapper that is silky smooth to the touch, the Esteban Carreras Cashmere Churchill also features a number of noticeable veins running up and down its length as well as a good amount of oil. The cigar is extremely firm when squeezed and two of the three samples featured obvious soft spots: the first under the main band on the right and the second just above the foot band in the middle. The aroma from the wrapper is a combination of creamy nuts, hay, leather, barnyard, bread, vegetal and aromatic cedar; while the cold draw brings very similar flavors of hay, creamy cedar, earth, nuts, espresso beans, minerals, baker’s spices and a small amount of white pepper.

The first third of the Esteban Carreras Cashmere begins with a very obvious peanut shell note on the palate and some salt on my lips, along with additional flavors of cocoa nibs, leather, creamy cedar, hay, earth and a touch of floral notes. On the retrohale there is a small amount of white pepper present that is playing well with some generic vanilla sweetness, while the finish is full of espresso bitterness. In terms of construction, both the burn and the draw are excellent so far while the smoke is billowing off of the foot aggressively. Strength-wise, the Esteban Carreras has issues clearing the mild mark by the end of the first third, a fact that does not seem to be changing very quickly.

Nuts continue to dominate the flavor profile during the second third of the Cashmere Churchill, but sadly, that flavor is quite a bit less distinct than it was in the first third. Some additional notes of creamy cedar, dark chocolate, roasted espresso beans, leather and earth flit in and out in various amounts as well, but unfortunately, the salt on my lips is long gone by the halfway point. There is a bit more white pepper on the retrohale, which I welcome with open arms, while the vanilla sweetness has increased, albeit only slightly. Construction-wise, the draw continues to impress, but the burn starts to wander resulting in a quick touchup to get it back on track. In addition, the overall smoke production continues to be both copious and dense, while the strength level is seemingly content to remain basically where it is for the moment, specifically at a point just north of the mild mark. Unfortunately, there are very few notable changes during the final third of the Esteban Carreras Cashmere, resulting in an extremely similar dominant flavor of generic and creamy nuts followed by secondary notes of hay, peanuts, cedar, bitter espresso, leather, earth and cocoa nibs, all of which are vying for space. The familiar profile extends to the retrohale as well, where the white pepper and vanilla sweetness don’t seem to have changed much compared to the second third. One big change is the burn—which has evened up nicely—while the draw continues to be a high point of the cigar. Finally, the overall strength does manage to increase enough to hit a point halfway between mild and medium just before I put the nub down with a bit more than an inch remaining. Different cigars are blended to deliver various qualities: some are meant to be strong, some are meant to be complex, some are meant to be balanced, while some are meant to feature a combination of attributes. While the Esteban Carreras Cashmere includes none of those aforementioned attributes, it does feature flavors that are distinct and enjoyable, albeit with no substantive changes throughout the more than two hour smoke time. One of the best things about the new release is the construction, which was top-notch from the first puff to the last, with an excellent draw and a burn line that rarely needed thinking about. In the end, the Cashmere is easy cigar to smoke, but if you are looking for a blend to challenge your palate in the slightest, you won’t find it here.