Stop me if you’ve heard this one before: someone’s releasing a cigar in celebration of an anniversary.

It has become a fairly regular occurrence, whether it be a store’s anniversary, a company or brand’s anniversary, or in this case, the anniversary of a person’s work in the cigar industry. That person, as you have likely guessed, is Erik Espinosa.

Espinosa’s history is best marked by two companies, EO Brands/United Tobacco, which was launched in 2003 with Eddie Ortega and became the parent company of brands including 601, Cubao, Murcielago and numerous others; and then his eponymously named company, Espinosa Premium Cigars, which was launched in 2012 and has since spawned relaunched versions of 601 and Murcielago as well as new lines including Laranja, Las 6 Provencias and others.

For this cigar, a blend featuring Espinosa’s favorite tobacco, Nicaraguan habano rosado, was selected for the wrapper, while Nicaraguan tobacco makes up the binder and filler. It was rolled into Espinosa’s preferred vitola, a 6 x 46 corona larga vitola.

While the Espinosa 20th Anniversary celebrates 20 years, it actually came out during Espinosa’s 21st year in cigars. He told halfwheel that he didn’t want to make a big deal out of the anniversary but finally relented to the requests of his son, Erik Espinosa Jr. 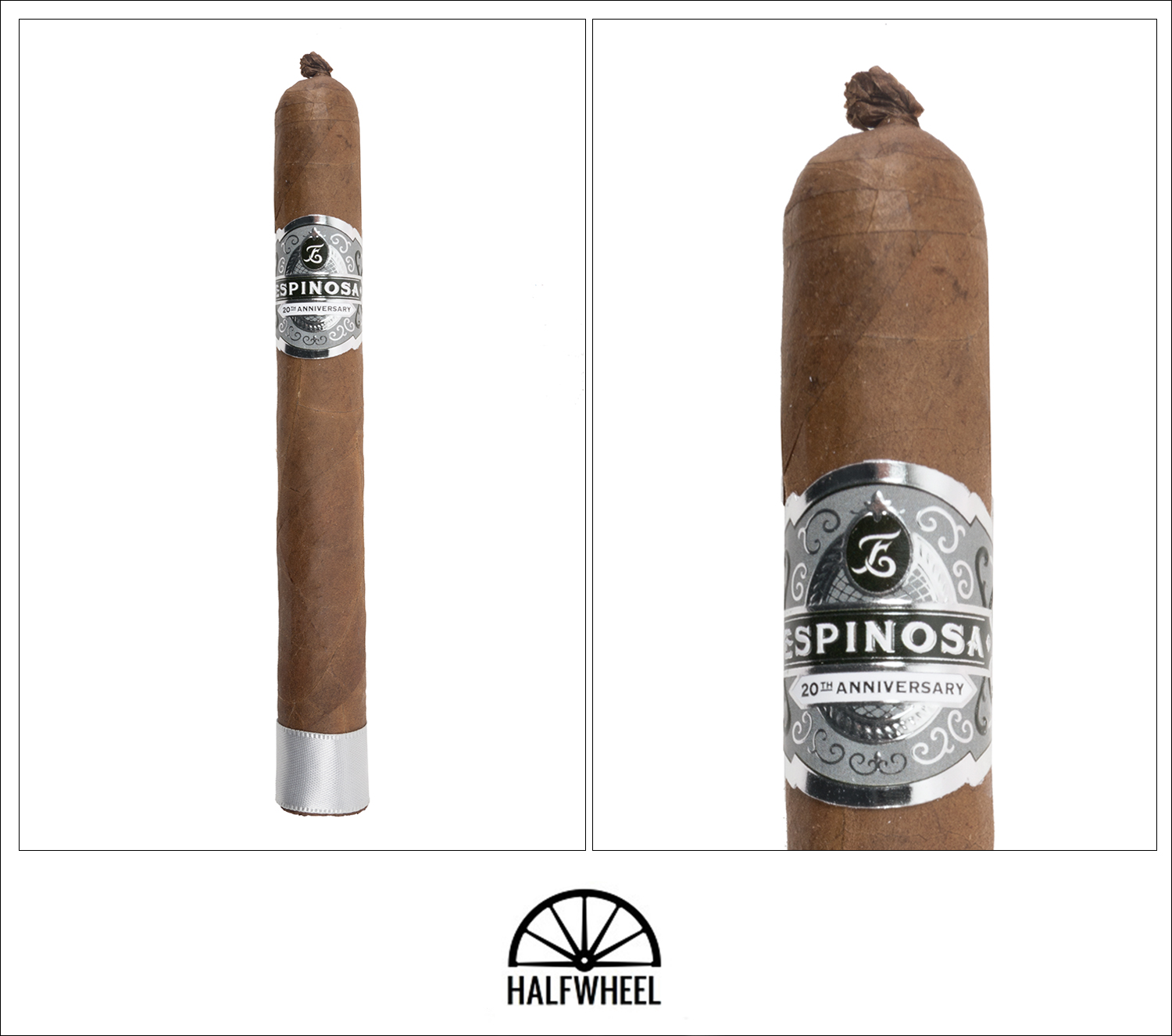 The first thing I notice about the Espinosa 20th is the oiliness of the wrapper leaf as I slide it out of the cellophane, something I did without looking at the first sample so it was a completely tactile sensation with no visual confirmation. The wrapper doesn’t glisten, but it is definitely smooth to the touch, with just a few small ridges created by veins. One sample has a bit of color variation which is most noticeable at the fit seams of the cigar, while the other two are more moderate. The vitola is also quite visually appealing; like Erik Espinosa, I love the corona larga vitola both for its look and how it gives me both the length and ring gauge I prefer. The roll is firm but not hard, showing just a bit of give when I give the cigar a gentle squeeze. The caps are fairly well cut and applied, finished off with a small, fragile pigtail. The wrapper has a very subtle aroma that reminds me of old woods with a bit of unsweetened cereal to give it a fresher spin. There’s also a touch of pepper to be found the more I smell the wrapper. The foot is more developed, delivering a sweet bread in front of the woody background in a nearly pepper-free, soft-on-the-nose smell. The cold draw is very smooth with a nearly identical flavor profile, though the wood does feel a bit more pronounced around the edges, and I get just a pinch of pepper as well.

I had become just enamored enough by the cigar to forget that the wrapper was a habano leaf, but the first puffs quickly remind me of it with that leaf’s distinctly peppery profile, backed by some Nicaraguan terroir that gives it a unique spin from its often-used Ecuadorian counterpart. It’s a profile that sticks with the cigar for much of the first third, with the pepper dying down a bit but never departing the profile. In some ways, it keeps me from writing a lot of words about the cigar, something that is a disservice to the vibrancy and depth of the flavor, but it comes out of the gate strong and locks on track in just a few puffs, getting into medium-plus territory and nudging into medium-full on a handful of puffs. The draw, combustion, smoke production and burn line are all near perfect with hardly anything to gripe about as long as I give it a regular puff. The Espinosa 20th Anniversary holds on to the habano-forward profile that it so quickly developed in the first third, meaning there’s a fairly vibrant pepper continuing to work on the front half of the tongue while some developed earthy terroir coats the tongue. If there was any question that Erik Espinosa Jr. favors habano tobaccos, it should be resolved fairly quickly as this is one of the most habano-forward cigars I can recall smoking recently, yet its relatively singular focus isn’t a detriment in the least. There’s still some peppery zing from the cigar as it wraps up this section, but it’s softened well by a creamy undertone on the palate and through the nose. The second third has stayed largely in the medium-plus territory in terms of flavor and strength, with only a few pepper-forward puffs creating some of the bite that Espinosa seems to pride himself on delivering in his cigars. The draw and burn are both still fantastic, skewing just a tick tight if anything. There is a cedar sweetness that I started picking up in the second third but is now much more recognizable and a significant part of the profile. Meanwhile, the intensity of the terroir end of the profile picks up quickly, a bit rough on the palate but still quite enjoyable if you gravitate to that profile. There is also a bit of orange peel citrus emerging in the aroma, taking on the smokiness of what carries it to my nose. The home stretch of the Espinosa 20th softens the profile just a bit while filling out the core flavors into a mouth-filling smoke that leaves a very slight tingle on the finish. Some eye-stinging pepper emerges in the final inch, with heat coming through the cigar onto the fingers that ends up being the signal to put the cigar down, as the flavor stays very friendly down to the nub. This blend isn’t for everyone, but if you like the distinctive taste of Nicaraguan habano-seed tobacco, you are certainly going to want search out the Espinosa 20th Anniversary. The blend is not only one of the most habano-seed dominant profiles I can recall smoking, but one of the best and with the proliferation of that style of tobacco being used, that is really saying something. At times, the profile does get a bit singular, but it never gets dull or monotonous, finding a very delicate balance between those possibilities early on and never deviating very far from it. The technical performance was nearly flawless as well, with a cold morning seemingly behind the only issues I had with one sample. When I heard Espinosa say that habano-seed was his preferred tobacco, it brought this cigar together for me, as it truly tastes like something made specifically for someone; fortunately there are just enough for a good number of us to smoke and enjoy.