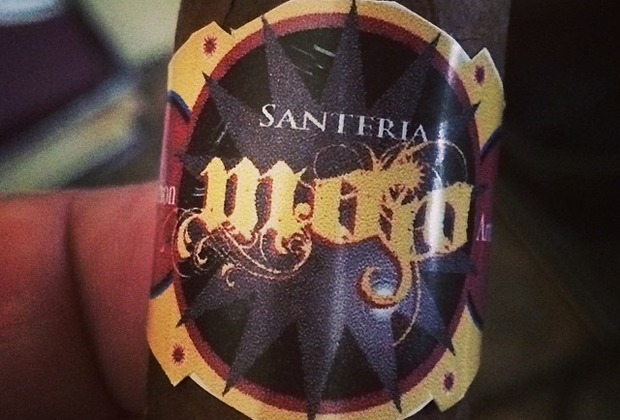 Epicurean Cigars is adding to its Santeria line again, as the company will soon be releasing a new limited edition cigar called Mojo. Steven Ysidron posted this picture of the cigar in a prototype band to his social media accounts on Friday: The blend came about during a recent visit to Estelí, Nicaragua, when Ysidron visited with the man who created the original Savinelli RyR blend with Ysidron’s father, Ruben.” We put an Arapiraca wrapper on it and traded out some Condega for some Estelí pepper; it was way different than any of the blends I do so I thought it could accent the line,” Ysidron said. He said that the wrapper is very rough and toothy, noting it is something “that looks like you might see a outdoorsman smoking: hence the name Mojo keeping in the Santeria, hudoo voodoo area.”

Ysidron said that he currently has enough tobacco to make 300 boxes of three sizes, though he is hopeful he may be able to secure enough to make 500 boxes of four sizes. One size that he had hoped to make, a lancero, is questionable due to the thickness of the wrapper. Unlike other releases in the Epicurean lines, there will not be a vintage on this release.

He anticipates the cigars could be ready in as little as 60 days, subject to getting all parts of the project ready, notably the boxes, a challenge which has been felt by several manufacturers in recent memory.

Ysidron also noted that his two other new lines, Carnaval and a signature line, are both waiting on aging.