After box production delays pushed the release of Epicurean Gonzo Santeria back from November into the new year, Steven Ysidron is nearly ready to ship his latest creation to retailers.

On Wednesday afternoon, Ysidron posted several pictures of the boxes to his Facebook page, along with the message that “Finally!!! The secrets of Santeria will be released..”

The cigars are in the final stages of production in Nicaragua, and Ysidron will be travelling to the factory to oversee the packaging process. If all goes according to plan, he anticipates having the cigars ready to ship to retailers in the next two to three weeks. 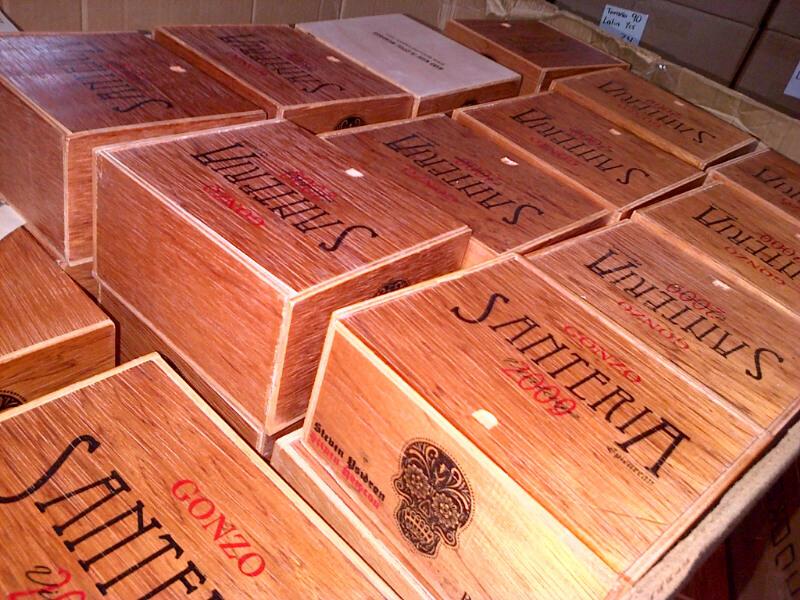 The Epicurean Gonzo Santeria was first announced in September 2013 and the company began a countdown to the cigar’s original November 1 release date shortly thereafter. However that date came and went with no sign of the cigar, and it was on November 7 that Ysidron told halfwheel that the project was being delayed due to a cedar shortage in Nicaragua and he was unable to take delivery of the boxes for the project.

The new line shares its roots with the existing Epicurean Gonzo, but adds noticeable amounts of strength that Ysidron acknowledges won’t be for everyone. The Gonzo Santeria replaces the original Gonzo Vintage 2007’s Broadlaeaf wrapper with a vintage Mexican San Andrés leaf, while a pair of additional ligero leaves and a double binder of Nicaraguan Jalapa and Mexican San Andrés sit underneath, along with filler from Nicaragua’s Jalapa and Condega regions.

The Gonzo Santeria is being made at the Plasencia factory in Nicaragua, the facility that also produces the original Gonzo Vintage 2007. While it was originally reported that the Gonzo Santeria would be available in two sizes, a 6 x 60 vitola called Justus and a 6 x 52 Toro, that has since changed. The Epicurean Gonzo Santeria is being released in the previously mentioned 6 x 60 vitola, though it is now called Padrino, while a 5 x 42 petit corona vitola called Ruca has been added. The 6 x 52 toro is also slated for release and will be called Heina. All will come in 50-count cabinets made especially for brick and mortar shops. Ysdiron is still planning on a release of approximately 150 boxes of each size, though acknowledged that until all the cigars are rolled, shipped and packed, he wouldn’t know if tobacco supply and quality control process would yield that amount. The Gonzo Santeria is anticipated to be between $10.50 and $11.50 per cigar.

When he announced the delay of the Gonzo Santeria, Ysidron mentioned that it would allow him to ship the final 100 boxes of the 2007 vintages of the Epicurean Armando Gutierrez and Gonzo. Because of the delays, those two cigars will actually begin shipping ahead of the Gonzo Santeria as they are currently in the company’s Florida warehouse. “This last batch will be a touch stronger since they were rolled at a much later date with the 2007 tobacco,” Ysdiron said at the time.

Production is also underway on the 2009 vintages of both lines, as well as on a new line called Carnival. As for his newest creation Ysidron is still being tight lipped about it, other than to say that the blend includes Nicaraguan, Brazilian and Honduran tobaccos. He did say that the box issues that forced the delay of the Gonzo Santeria are also affecting Carnival. The project was supposed to be released in March, but with the box delays, Ysidron has had to rethink some of the packaging, which has pushed back its anticipated release date to a tentative launch date later in the spring. Because of the packaging work still to be done, he wasn’t able to provide a more specific release date.

You can see more of the Epicurean Gonzo Santeria boxes in the pictures below.