Just about a year ago, on Feb. 28, 2014, halfwheel published its second review of a cigar from a new cigar company called Epic Cigars, a cigar called the Epic Reserva Maduro. Just a few weeks earlier, the Epic Reserva Corojo was reviewed, and the company was preparing for its formal launch, with an appearance at the 2014 IPCPR Convention & Trade Show quickly approaching. Somewhere between 10-15 retailers took delivery of this second cigar in Epic’s portfolio, and then, the cigar changed.

According to Dean Parsons, the man behind Epic Cigars, he had been working with other versions of the Maduro Reserva and made the decision to tweak the blend in March 2014, just weeks after the review was published and weeks after the first handful of cigars were shipped to stores. What was the tweak? A new binder, using a Cameroon leaf in place of the original Dominican olor, while the filler was tweaked to add a bit of Nicaraguan viso. The original blend was discontinued, and the new version was the one that was brought to IPCPR and the one that has been on shelves since. In addition, Parsons made a change to one size in the line, going from a 5 x 50 robusto to a 5 1/2 x 50 size priced at $8 per stick. The revamped Epic Maduro Reserva remains available in the other two original sizes, a 6 x 54 double corona ($8.50) and a 6 x 60 ($9), all three of which come in five-, ten- and 20-count boxes, though it’s the latter that you are most likely to see on store shelves as the other sizes are said to be reserved for events and promotions. The Epic Maduro Reserva has an incredibly dark brown wrapper, a shade that screams maduro and is what I would think most people envision when they think of the term. The roll quality looks good and it’s fairly firm from head to toe, not overly packed but it certainly doesn’t leave room for much more tobacco, if any for that matter. There are a few bumps and veins in the wrapper that keep it from being perfectly smooth, but it’s a fine visual specimen nonetheless. With the die-cut band, the presentation can be thrown off a little depending on how the cigar has been handled; in particular the tail of the p seemed the most prone to getting bent up. There is some definite sweetness coming off the foot but also a good bit of soil, making me think of walking through a blackberry field but also leaving me searching for a more accurate description. The cold draw is pretty much perfect in terms of air flow, delivering notes of wheat toast and a bit more of this unique earthy sweetness that I can tell is going to occupy my mind for a good part of this cigar.

The first puffs of the Epic Maduro Reserva offer a good bit of strength without being overpowering; a firm but not crushing sensory handshake to start off the smoke. There’s still some subtle and distinct sweetness at play, sweet woods with just a bit of sap and touches of pepper on the other end of the spectrum that are most noticeable in retrohales that linger in the nostrils for a few extra seconds.  The first clump of ash lets go when it hits about three-quarters of an inch long, a bit earlier than I would have liked, but nothing to fault the cigar over. On the samples that don’t have quite as much pepper, I find myself spending the bulk of the first third trying to decipher and deconstruct this aroma, hoping to identify the individual components that make it so enjoyable; something that’s a challenging task and one that might be better left alone so that I can just focus on the actual cigar. On one sample I ran into a more pepper-forward profile that overshadowed the sweetness, a real unfortunate situation because of just how enjoyable it is and how much of complexity and balance it provides the cigar. The burn line has been sharp and even, while each puff produces an abundant cloud of smoke. It’s a very gradual change in the early goings of the second third, but I can sense the sweetness beginning to recede a bit and make way for the cigar to explore some other flavors and aromas, most notably earth and pepper. This transitional section takes on a bit of a damp note, weighing down the smoke a bit and holding back its punch for a couple of puffs before the pepper that was prominent in the first third is able to move towards the spotlight. On the one sample where the sweetness wasn’t as prominent, the pepper takes over fairly early in this portion, while in the others it’s closer to the midpoint. The draw, burn and smoke production in the first half have been fantastic, with absolutely nothing to note in that regard. The pepper begins to settle down just a bit past the midway point and in the approach to the final third, still staying front and center but reducing its intensity just a bit. Each cigar has me longing for the sweetness to return to provide a bit of a change as well as some added complexity, not to mention the fact that it was so captivating to the senses that I want another crack at deciphering exactly what it was that made it so enjoyable. While the pepper may have begun to mellow out on the palate in the previous third, there’s still plenty left for the nose both via retrohales and in the ambient smoke, and it’s taken on a different characteristic than it had presented earlier. 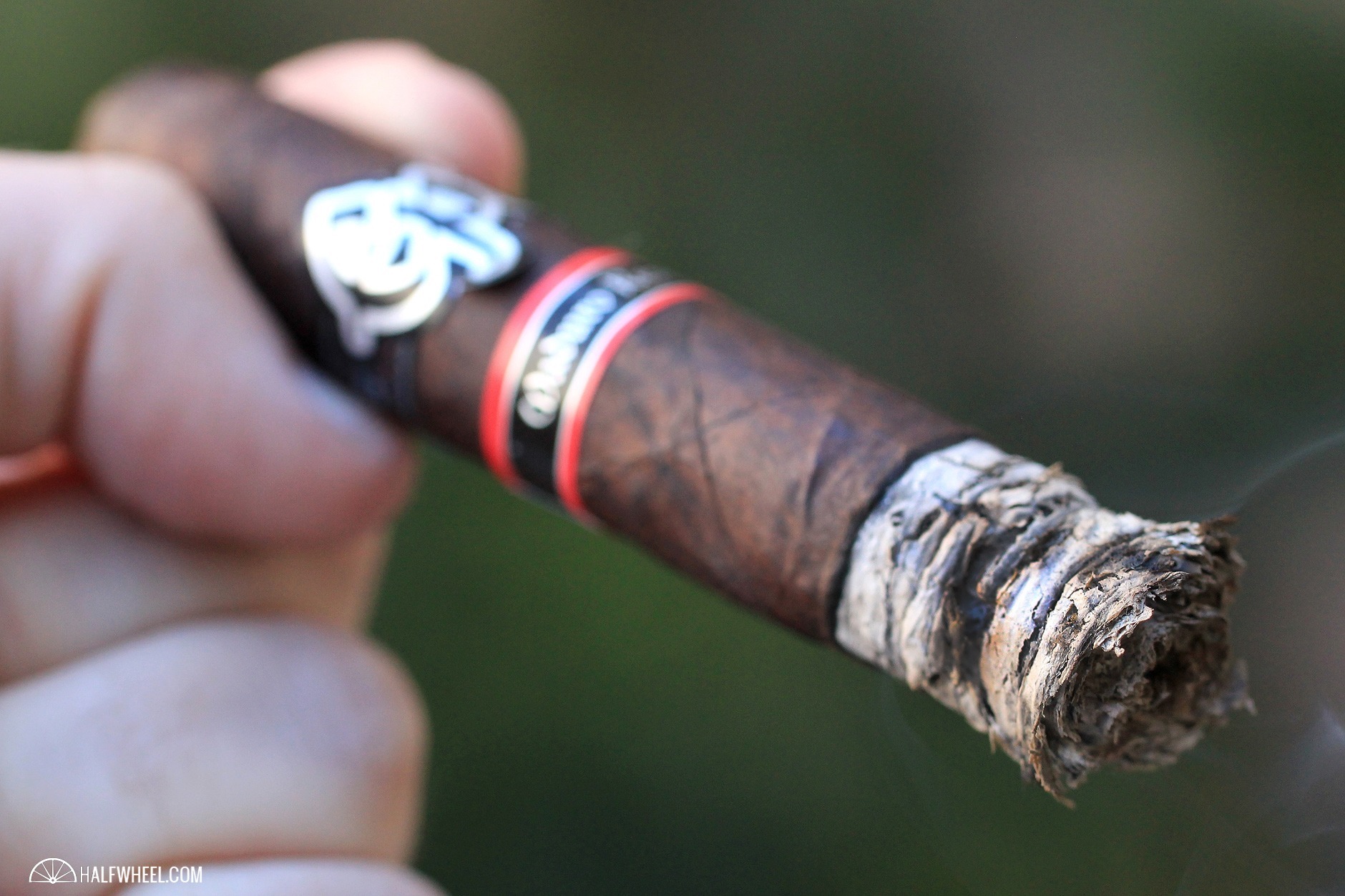 While the first two thirds offered more of a table pepper note with a leaning towards black pepper, now it’s a bit grittier and more pungent, lingering in the nose with an earthy characteristic while also showing a touch of charred steak. Even though it’s evolving, there’s still a bit of familiarity to the taste when comparing it to other cigars on the market, and it fails to capitalize on the distinct sweetness that the first third offered, seemingly missing an opportunity to really create a unique and memorable overall profile. Any hopes I had of the sweetness making an appearance seem to be dashed, instead replaced by more pepper, earth and fleeting touches of heavy wood, all of which combine to give the cigar a bit of gravitas. I swear there are points where it comes back for just seconds at a time, though maybe it’s my imagination and wishful thinking playing a bit of a trick on my senses. It’s only in the final two inches when the burn line shows any issues, becoming just a bit wavy and uneven but not hampering the overall progress of the cigar. The pepper keeps getting poured on in the last inch and a half, leaving it up to the senses to determine when they have had enough and it’s time to put the cigar down. I’m certainly glad I didn’t read the review of the first incarnation of the Epic Maduro Reserva before lighting this reblended version up, if nothing less out of fear that it would have skewed my impressions of what the cigar might offer. I’d love to compare the two head-to-head to see just how much the Cameroon binder and tweaked filler changed things, but I certainly have to think it was for the better. What troubles me is that it seems like this new Epic Maduro Reserva missed a golden opportunity to really establish itself as a unique cigar and flavor profile. The first third was not only enjoyable, it was also engaging, causing my senses to perk up and my mind to try and decipher exactly what it was I was tasting and smelling, much like a good chef does with a well-crafted dish. Yet instead of challenging me to do that the whole way through the cigar, the second half became familiar, relying on a leading pepper note on top of an earthy backing flavor to carry the cigar to its conclusion. This revamped Epic Maduro Reserva is still a good showing from the young company, and one that’s certainly worth trying should you come across it.