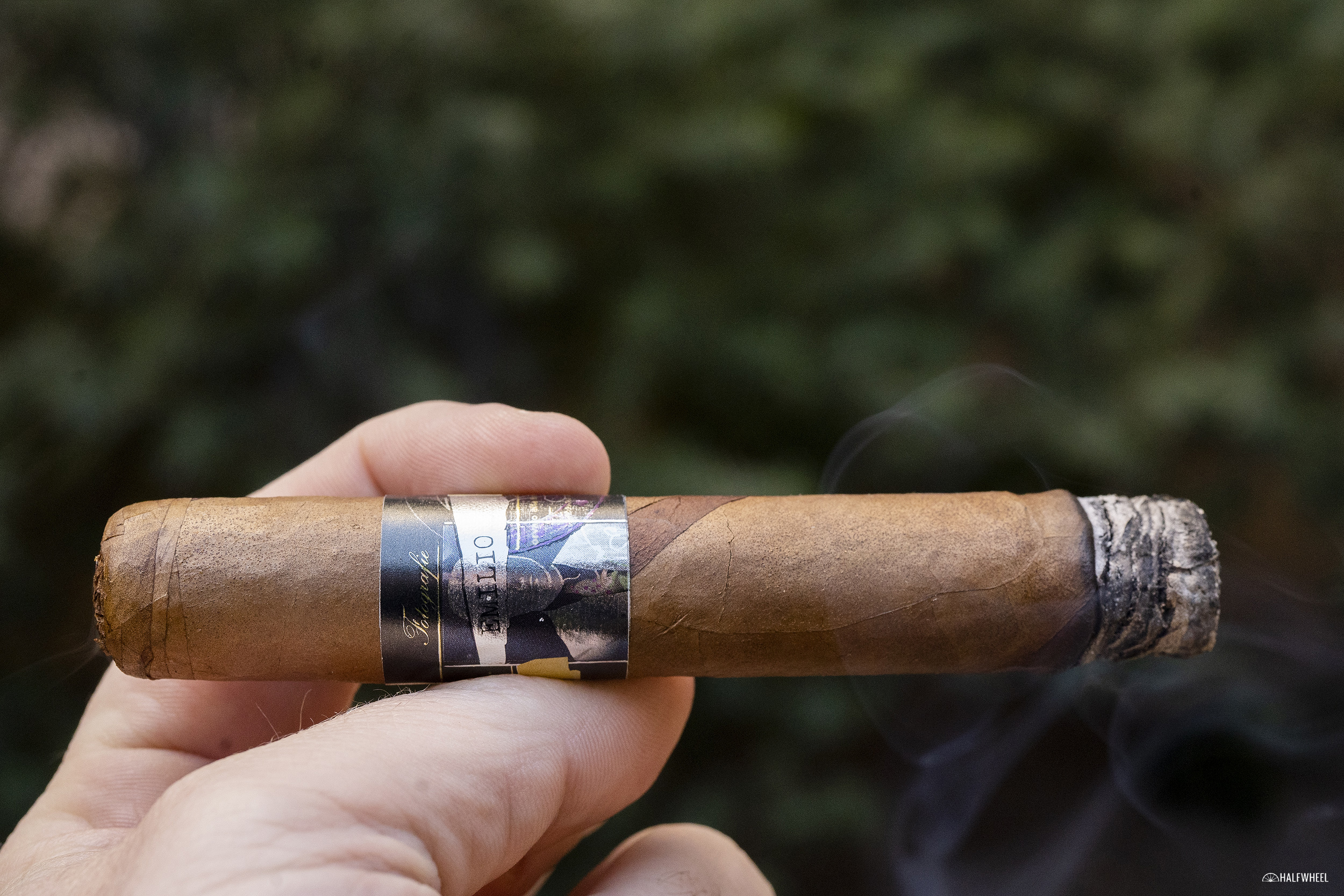 Whenever I hear the name Emilio, the image of a cigar with a pair of cat eyes on it immediately comes to mind.

That cigar, as you might remember was Grimalkin, a cigar that debuted in 2011 and was part of the company’s original portfolio of cigars. Call it the first generation of Emilio.

Fast forward nearly a decade, and the Emilio brand is still around, but now in what could be called version 2.0. That change came by way of a merger with Black Label Trading Co. that was announced in January 2019, and which shifted production of the Emilio portfolio to Fabrica Oveja Negra, as well as moved the marketing and branding of the company into BLTC’s purview.

It wasn’t long before the Emilio started getting a makeover, with revamped AF1 and AF2 lines coming out that May and an updated Suave and La Musa that summer.

Meanwhile, the Emilio LJZ was already being produced at Fabrica Oveja Negra since its debut in July 2017. That cigar got its name—from both the initials of the company behind it, L.J. Zucca, and the man behind the company, Louis J. Zucca.

“LJZ is a cigar that has been 70 years in the making. In 1947, my family started LJ Zucca from my grandfather’s front porch and it’s grown into the regional distribution company it is today,” said Scott Zucca, owner of Emilio, in a press release when the cigar was announced. “The LJZ cigar is a tribute not only to them and its many employees, but also to the hard work, character, and entrepreneurial spirit that makes this country great. I believe it’s our best Emilio cigar release yet.”

In early October 2020, the line would get its first limited edition, the Emilio Limited Edition LJZ.

“I’m very excited about this release,” said James Brown, founder of Black Label Trading Co., in a press release. “This year we changed it up a bit by making the cigar with two wrappers. We combined the light habano from the previous release with a sun grown habano.”

Note: The following shows the various Emilio Limited Edition LJZ releases over the years. Some of these cigars may have been released after this review was originally published. The list was last updated on Dec. 8, 2020. 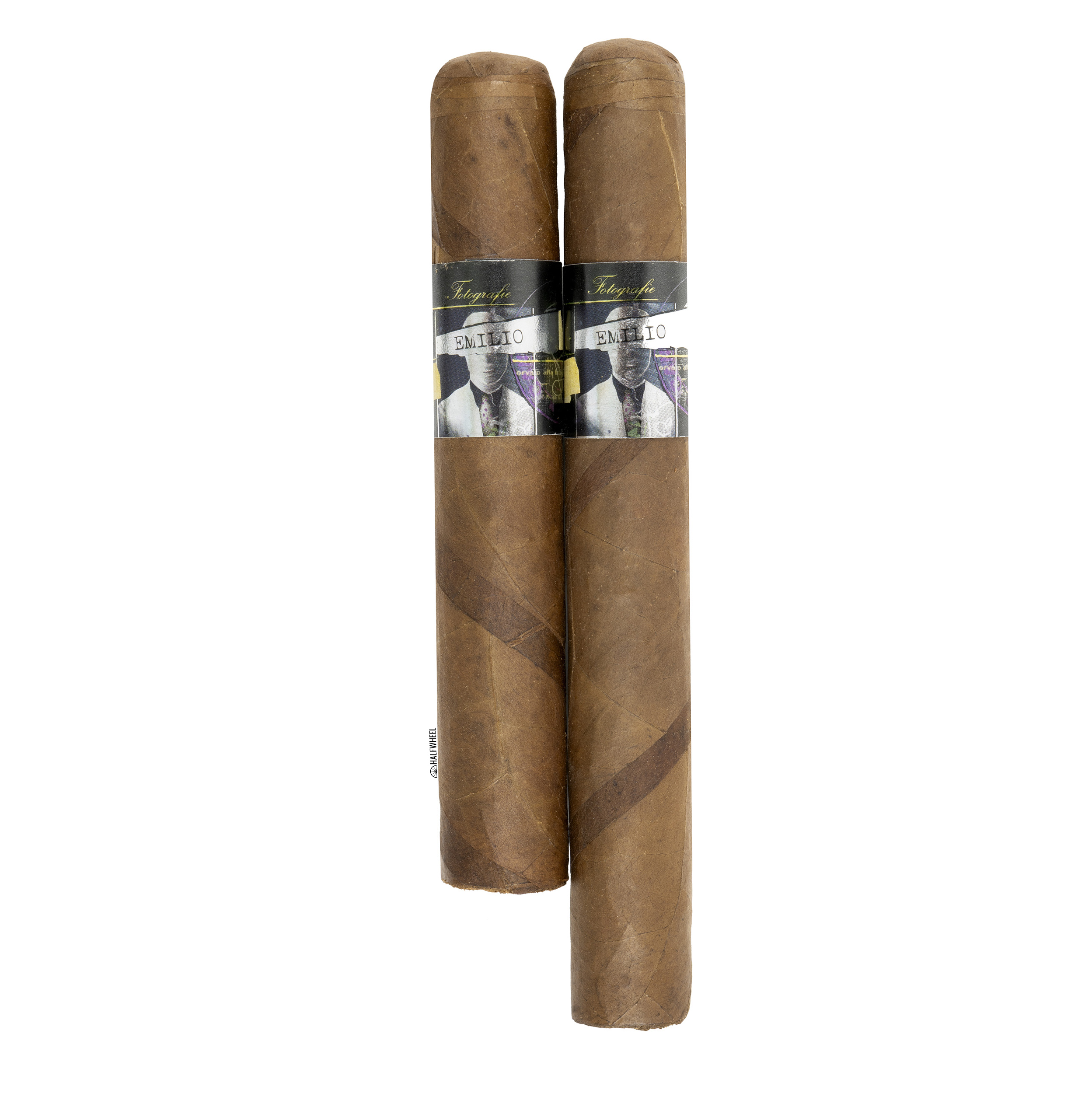 As a fan of Nicaraguan habano in general, I’m always on the lookout for another option to put in my rotation, and I’m happy to report the Emilio Limited Edition LJZ Robusto definitely checks pretty much every box to earn a place in it. The flavors are clean and bright, as well as generally complex and well-balanced. Outside of some pepper, nothing gets too out of balance, and even when that happens it’s generally quick and still palatable. Construction on each cigar was very good, though I would have liked a bit more consistency among the draw of the three samples. Other than that, there’s not much to complain about, except that there were simply far too few of these made.

Both sizes are limited to 250 boxes and are made at Fabrica Oveja Negra in Nicaragua, in which Brown is a partner. Brown added that the artwork he created is a tribute to the brand owner Scott Zucca’s Italian heritage. 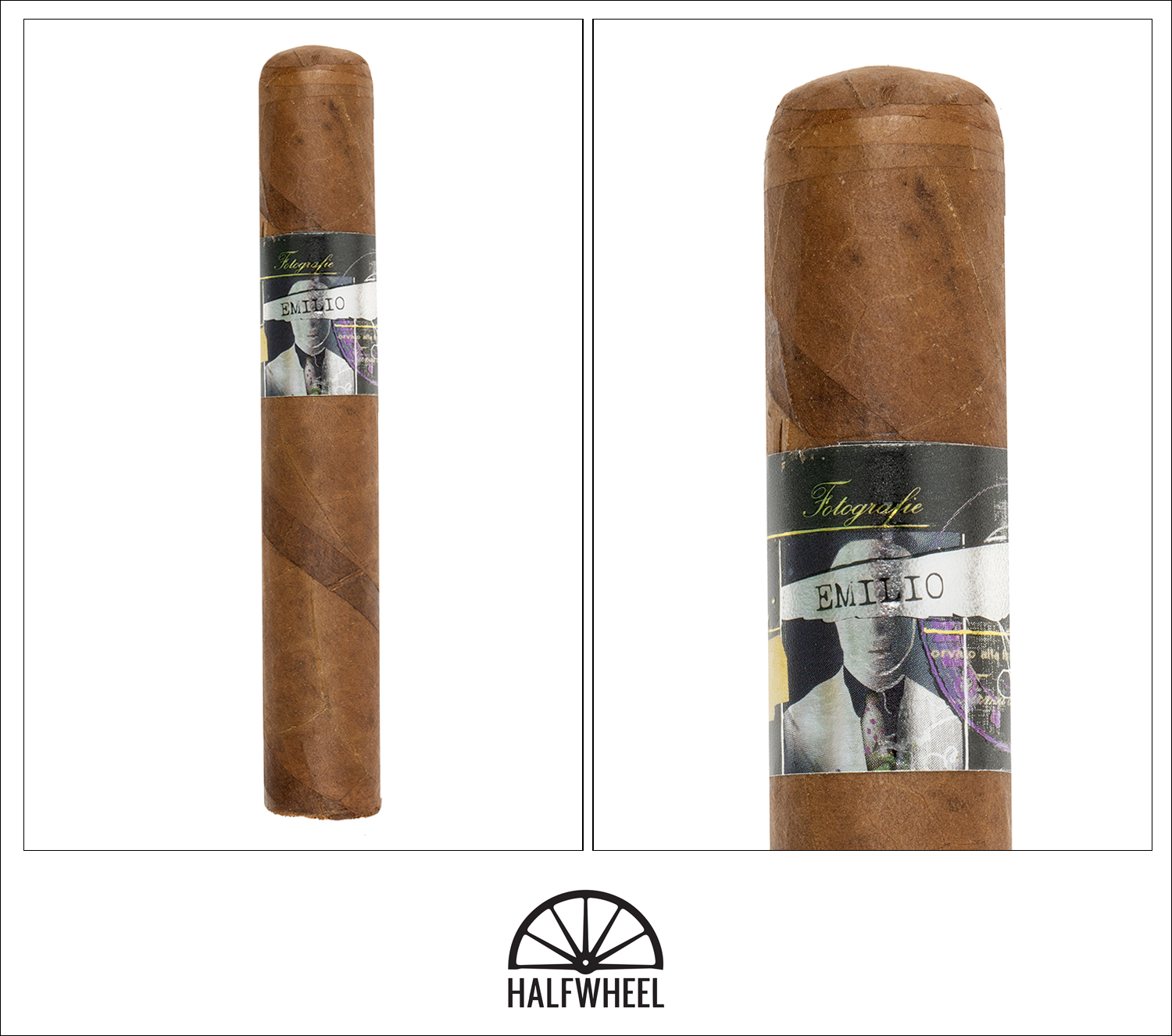 I almost didn’t notice the barber pole stripe on the Emilio Limited Edition LJZ Robusto while it was still in the cellophane, but once out it is unmistakable. The color of the two leaves work well with each other, creating a tonal presentation that can call to mind mixed nuts, earthiness of hues of wood. It’s a firmly rolled cigar, and I learn quickly not to give it too much of a squeeze as the lighter wrapper is on the fragile side. The foot has a light and cool aroma that reminds me of opening a bag of brown sugar before picking up some very subtle baking spices, dry soil and flirtations with lumber and mixed nuts. Air moves fine on the cold draw with cashew, sweet oiliness and something that tastes like a combination of orange and light wood hitting the tip of the tongue. Somewhat surprisingly, I don’t get any pepper from the cigar prior to lighting.

The Emilio Limited Edition LJZ Robusto opens with a profile that isn’t much like what if offered pre-light, hitting my palate with woodiness, some dry earth and a building mix of white and black pepper, a profile that almost immediately reveals the identity of the habano tobacco in the blend. It also puts out quite a bit of fairly thick and creamy smoke, the combination of which is attention-grabbing in pretty much all the right ways. Retrohales offer a bit lighter take on the earth but otherwise play many of the same notes, which makes the black pepper and woodiness a bit brighter. The creamy texture of the smoke helps to shift and soften the flavor a bit, and it feels like the texture of the smoke and flavor of the cigar could be headed for promising synergy. That said, the first inch and a half has been very good with few complaints. As one might expect from a habano-forward blend, flavor is medium-full, body is medium and strength is somewhere in the middle. Construction is very good other a varied draw among the samples.

While I don’t think the cigar burns quickly, it doesn’t seem to have any delays and the burn line hits the second third just about 30 minutes after it was lit. The creaminess continues to give the cigar some depth and balance, countering the more vibrant pepper and woodiness. I’m a bit surprised that the Emilio Limited Edition LJZ Robusto doesn’t offer a heartier base note, but I’m not complaining. Even with a lingering finish, the smoke sits lightly on the palate. It also passes through the nose without issue, offering a slightly denser smoke at first sensation that quickly unpacks its pepper and leaves a lingering tingle in the nostrils. There’s a very enjoyable profile of woods, nuttiness, earthiness, a bit of leather and a decent accent of black pepper as the second third comes to a close. It’s an almost unmistakably habano profile and at times it can irritate the throat a bit, but for the most part, doesn’t cause too much of a problem. Rather, it’s very pleasant on the palate, with the profile delivering on the promises of balance and complexity that were made in the first third. Construction is still fantastic with plenty of smoke production, an even burn line and a problem-free draw. Flavor is still at medium-full while body and strength are medium-plus. 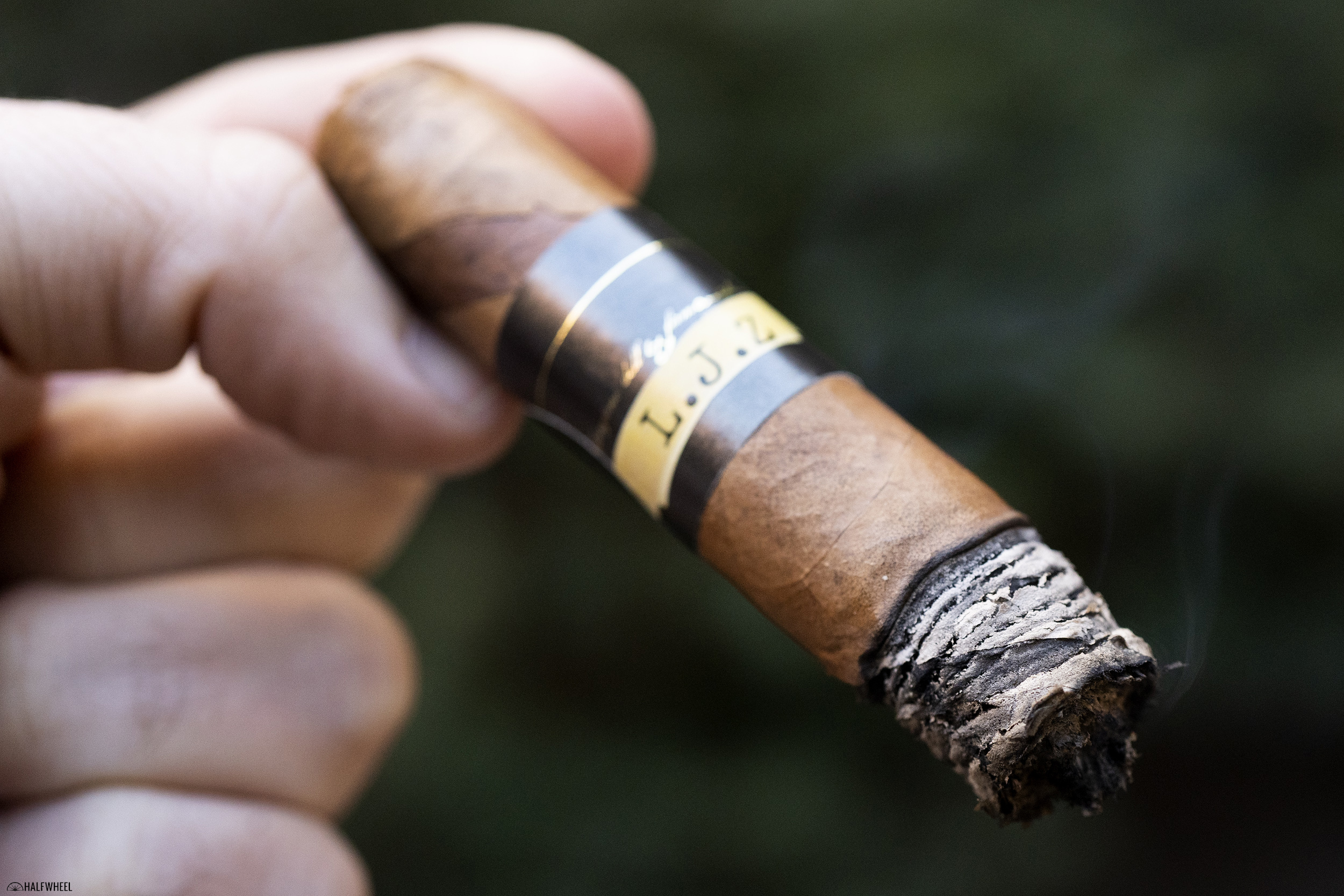 If you’re looking for a cigar that zigs and zags all over the flavor wheel, the Emilio Limited Edition LJZ Robusto is probably not going to be the one you’ll want to pick up. Rather, the final third starts with more of the very good habano flavors—black pepper, woodiness and a bit of dry earth—distilling and intensifying them just a touch for the remaining portion of the cigar. There’s a bit more of a lingering finish in this section than was offered previously, something that is also noticeable because of the absence of the creaminess that had been such an enjoyable component. The home stretch adds a subtle flavor and aroma that reminds me of fresh flowers, although it’s so mild and fleeting that I’m questioning if that’s the best descriptor. From there, the cigar picks up more terroir and dry earth, reminding me a bit of Honduran tobacco even though there isn’t any listed in the blend. The wood and pepper continue to lose their relative smoothness, signaling that it is time to put the cigar down. While they’re not the smoothest of final puffs, they still make for an enjoyable conclusion. Flavor progresses from medium-full to full, body is medium-plus, and strength has stayed closer to medium.

As a fan of Nicaraguan habano in general, I’m always on the lookout for another option to put in my rotation, and I’m happy to report the Emilio Limited Edition LJZ Robusto definitely checks pretty much every box to earn a place in it. The flavors are clean and bright, as well as generally complex and well-balanced. Outside of some pepper, nothing gets too out of balance, and even when that happens it’s generally quick and still palatable. Construction on each cigar was very good, though I would have liked a bit more consistency among the draw of the three samples. Other than that, there’s not much to complain about, except that there were simply far too few of these made.