In June 2012, Gary Griffith of Emilio announced a host of cigars at once—seven new lines in all. They were set to debut at different times over the next year, an ambitious goal at that, but not all to surprising. Included in that release was a new blend, a strong one—Carpe Noctem.

At the time, Griffith described the cigar as a three-size line, made by A.J. Fernandez and strong.

Carpe Noctem translates from Latin to “Seize the Night.” This incredibly dark, strong, and spicy cigar will feature a broadleaf maduro wrapper, and plenty of Esteli ligero in the filler. These cigars will be available in robusto, toro, and 6×60 sizes, and packed in cabinet boxes of 20.
I’ve once again gone back to A.J. Fernandez to produce this cigar, and those fond of powerhouses should be well satisfied. We’re still toying with art work for boxes and bands, and expect to release these cigars during the first week of 2013.

Obviously, the early 2013 date was not to be. In addition, the cigar will come in 21-count boxes, but the rest remains largely how Griffith announced it two years ago: Pennsylvania broadleaf wrapper, the aforementioned three sizes and strong.

The cigars were shown off at the 2014 IPCPR convention trade show last month and are expected to be released this month. Fans of larger cigar bands will be happy with both bands on the Carpe Noctem—as neither are small. The two pieces of artwork lie on top a medium-colored Pennsylvania broadleaf wrapper, a reminder that all broadleaf need not be overly thick and jet black. There’s some barnyard and leather from the outside of the cigar, whereas the foot shows off an extremely pepper-rich profile and some very distinct reminders of ligero. If you’ve been to a cigar factory and smelled different types of Nicaraguan tobacco, the distinct smell of a popular Nicaraguan ligero filler in a stronger state is clearly  present. Cold draw shows off cocoa, nuts, espresso and a bit of salmon characteristics. Draw is a bit tight, but it falls within my comfort zone.

If you had any doubts about whether the strength would be there, the first puff settles the debate. While there’s not a ton of physical smoke, there’s a heavy dose of nicotine alongside flavors of jalapeño salt, sweet cocoa, burning wood, walnuts and a hint of grapefruit. It’s a heavy and aggressive start to the Carpe Noctem, although as the cigar gets going in, the cedar notes begin to overtake things. An inch and the pepper is starting to be cut by oatmeal and espresso. While the strength is full, the flavor is medium-plus with a good bit of habanero-like pepper sticking around  in the back of my throat. Despite having no issues with the construction for the first third, the smoke production is becoming far less consistent in the second third. At times it is copious, at other times, I need to take multiple puffs to keep up a preferred rate. I cannot help but wonder if this is due to the amount of heavy tobaccos that are inevitably in the blend, although the Carpe Noctem never goes out. Flavor-wise, creaminess and caramel are now doing the work to cut through the plethora of pepper. It’s a great contrast in a lot of ways, bright sweet flavors in the mouth and a mixture of green and red pepper notes in the nose. Strength is still full, not building, but still very much aggressive. 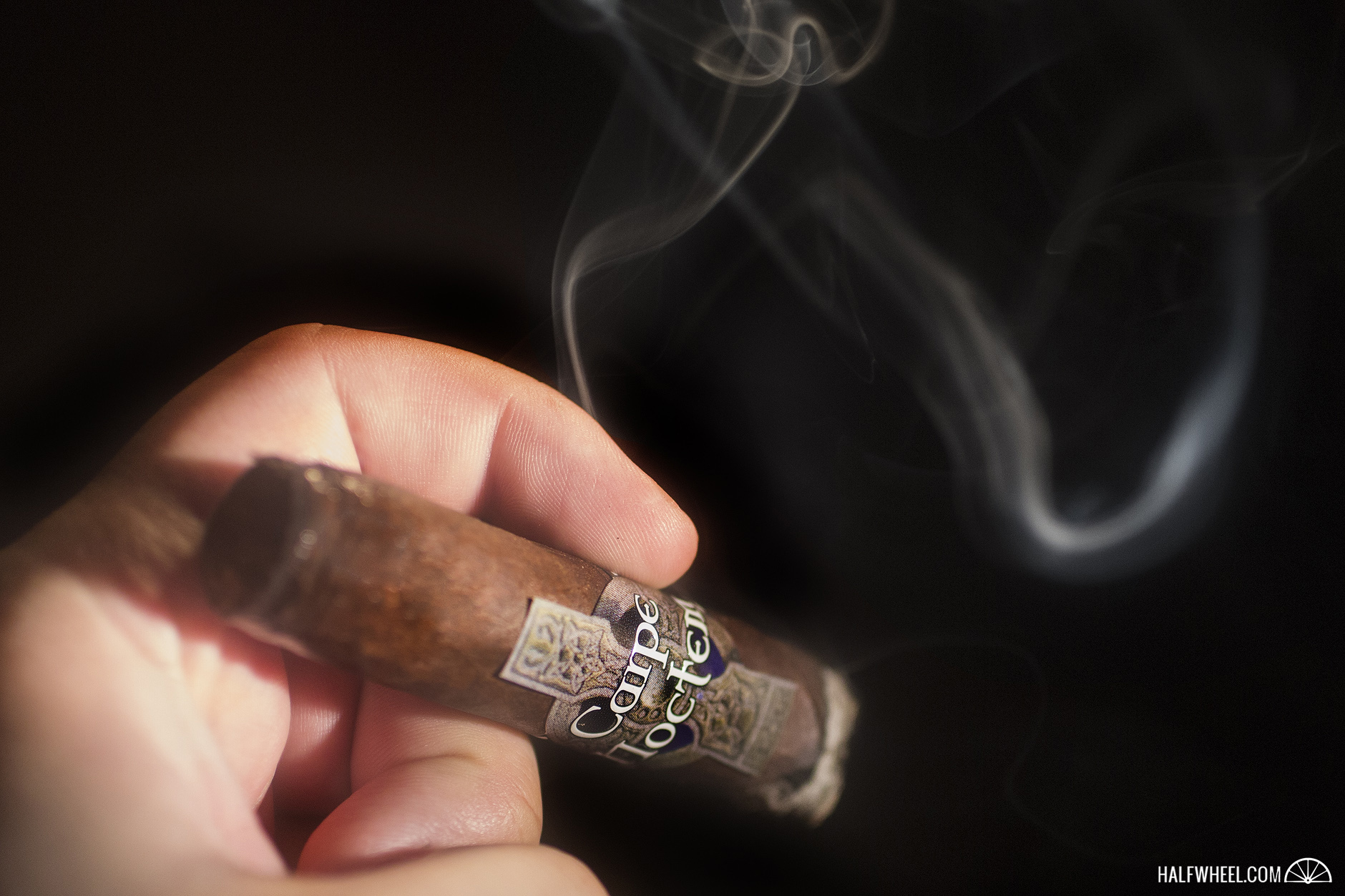 A grapefruit sweetness that I am beginning to detect in more and more Nicaraguan-based cigars comes back for the final third. That and a sweet cocoa join the cedar and pepper notes. It creates for a great finish, but the flavors are not as lively on the initial parts of each puff. Despite all the heavy tobaccos and somewhat inconsistent burn rates that force quicker puffs, there’s very little harshness down to the final inch of the Carpe Noctem, something I may have not guessed given the initial puffs. This was a success. If you wanted to make a overly strong with an enjoyable flavor, here’s a great start. It is not the best cigar I’ve smoked from Emilio, far from it actually. While I enjoyed the Carpe Noctem, I do feel at times the cigar was more about its intense strength than its flavor, and that’s disappointing. There’s balance in that the flavor is present from start to finish, but there’s little interplay between strength, body and flavor—something that would make this far more complex. There’s a niche audience that is into strength for the sake of being strong, for that segment of the marketplace—Carpe Noctem is a real winner as it provides an enjoyable smoking experience, for most however, this is probably far too strong.