At IPCPR 2011, the boutique brand EloGio announced the limited edition Excepcionales, a 5 5/8 x 82 (yes, you read that correctly) Double Perfecto. The 300 boxes of 10 Excepcionales joined EloGio’s two other lines, the Serie LSV and the Serie Habano, both of which are available in the same six vitolas.

EloGio is owned by Nabil Sabbah and blended by Carlos Pereda Robaina, grandson of the late Alejandro Robaina. Their coveted secret is the LSV wrapper that is grown by Carlos and Armando Robaina in Ecuador. Up until late 2011, they grow the wrapper in Nicaragua, but as with many others, EloGio is finding better success in Ecuador. Production stays below 50,000 annually, making it one of the smallest companies in the industry. To put that number in perspective, EloGio makes significantly less cigars in one year than Drew Estate makes in a single day.

The boxes of the EloGio Excepcionales look like this: 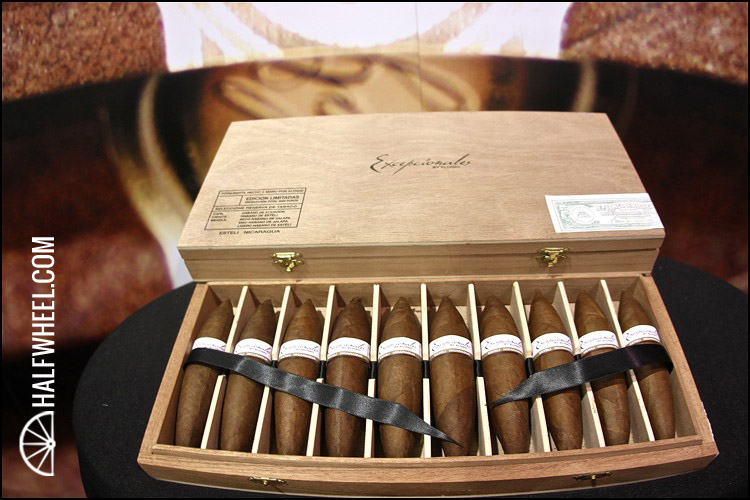 The EloGio Excepcionales is an extremely unique looking cigar, like a cross between a Drew Estate Egg and an Opus X Football. It’s extremely thick in the middle and looking at it, I wonder how it will burn with all of that tobacco stuffed into it. The Nicaraguan wrapper is a darkish reddish brown color that has quite a bit of tooth to it when you run your finger down the length. There is some oil present as well, and the cigar is a little spongy when squeezed, which is not surprising, considering the vitola. The wrapper smells like a combination of wood, (slight) barnyard, leather and not much else.

Starting off the first third of the EloGio Excepcionales, I get a bit of black pepper on the retrohale — just a small amount of spice on the lips and a nice buttery note along with cedar and chocolate. As with all Perfectos of this size, the burn (and flavors) take a while to get going, but once it does, the profile come quickly. Cedar, leather, chocolate and a nice nuttiness are dominant, but there is a bitterness in the background that comes and goes, which I think this is caused more from the fact that I have to draw harder to keep the cigar lit (due to the monstrous RG) as opposed the blend itself. Strength is a mild medium at this point. Into the second third, and sadly, the profile of the EloGio starts to fall apart. The bitterness that was in the background takes center stage, as I struggle to keep the astounding amount of tobacco in the largest part of the RG lit. I can still taste other flavors, mainly the same that were in the first third, but it is beyond frustrating. Having said that, the burn and draw were actually pretty good, but I had to relight a few times to keep it going. After the bulb and into the final third, the bitterness recedes in the Excepcionales and the flavors come back to the forefront. A nice creamy nutty note, with some sweetness, along with wood and chocolate are dominant, and I even taste just a bit of a nice floral note that comes and goes. While the bitterness is still in the background, it is not so bad that it negatively affects the rest of the flavors. Strength continues to increase, until it is a solid medium at the end of the cigar. The Bottom Line: While I have enjoyed other extreme vitolas in the past (i.e. Flying Pig, Feral Flying Pig, BBMF, etc.), this one just did not do it for me. Unlike those other cigars, the entire time I was smoking the EloGio Excepcionales, I could not help but think that the it was more of a gimmick, rather then a vitola that actually enhances the blend. Really, the problem comes when comparing the Excepcionales to the other vitolas in the EloGio line. Compared to something like the LSV Corona, this cigar falls far short, both in flavor and construction. While I don’t think this was done just for the looks, after smoking a couple, I don’t see why anyone would buy them over any of the other wonderful vitolas and blends that EloGio produces. My advice is to stick to those much better cigars, unless you are looking for a conversation piece.