Say the name Elie Bleu to a cigar smoker, and it would be a fair bet to say that one thing comes to mind: luxurious and fairly expensive humidors.

While that is certainly still the case, the company added to its offerings in 2016 when it branched out to cutters and lighters. The latter category was filled by a selection of offerings that included one particular model that seemed to take direct aim at one of the most iconic lighters around, the S.T.Dupont soft flame that is found in that company’s Ligne 2, Initial and Ligne 8 lines, among others.

A bit of background reveals an interesting connection between the two, as Rëyns International, formerly Lotus International, which had previously distributed S.T.Dupont, is distributing Elie Bleu in the U.S. as of April 2016.

The Elie Bleu F-1 Wide Flame Flint Lighter is not an exact replica of a Ligne 2, standing a bit taller—2 1/2 inches—and a bit thinner—1 1/4 inches—in width, but the comparisons are certainly ripe for the making. It also checks in at 5/16 of an inch thick, while weighing 3 ounces (84 grams). Pricing starts at $500 and goes up to $800 depending on the finishes. The gold and black lacquer version I’m reviewing is at the top end of that.

If you’ve used such a lighter before, the learning curve is fairly low with the Elie Bleu F-1, though it’s much higher if you’ve never utilized the cylindrical flint roller ignition system. In the most basic terms, flip open the lid to start the butane and reveal the flame mechanism, then give the roller a quick and intentional spin with the thumb to provide the spark that lights the fuel and produces a soft yellow flame. As long as there is butane in the tank, which the company states hold one gram of fuel, it’s a virtually foolproof ignition mechanism. 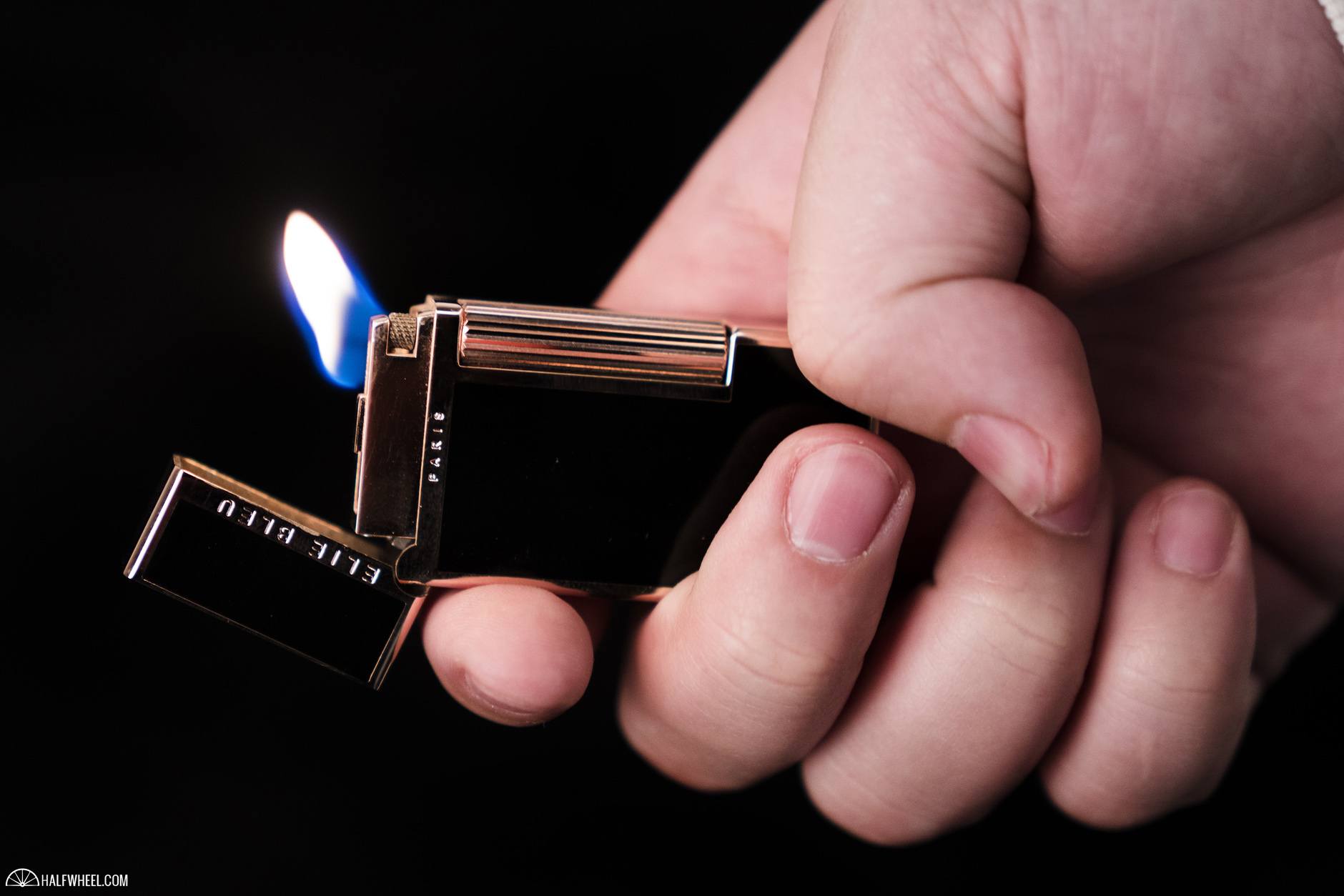 If there’s a selling point on this lighter other than that it bears the Elie Bleu name, it’s what the company calls a “double wide cigar flame.” While that name conjures up thoughts of mobile homes at first, it does become the eventual focal point of the time I would spend with the F-1.

At its most basic, the F-1 offers two flames by way of fuel flowing out of a pair of holes, with the two flames heading in opposite directions. The easiest way to see this is to open up the adjuster on the base of the lighter to its fullest, though at this setting the dual flames lose the sharpness I find critical to efficiently lighting a cigar, with which a soft flame is certainly a relative concept given how easily it is swayed with even a slight breeze. At its most open, the F-1’s flames are almost completely for show and not for the successful lighting of a cigar. At the level of flame adjustment that I found to be most suited to lighting a cigar, the split was harder to notice, let alone appreciate. That said, I did go grab a couple of other soft flame lighters from my collection to do a side-by-side comparison, and I must admit that the Elie Bleu does offer a bit wider flame. It’s not so wide as to be too much for a slender cigar such a lancero or panetela, yet handles thicker cigars fairly easily when the two flames are able to work together.

While nice, it’s a feature that is still somewhat hard to appreciate, at least for a cigar smoker who is frequently outdoors or in places where the air conditioning is generating steady movement of the air if not outright gusts in the summer months. The dual flame does provide a good sized flame, yet it is still subject to the whims of the wind.

This is certainly not to say that the F-1 is not an impressive and useful lighter; it is, given it is provided the right environment in which to be most effective. Like most soft flames, it does best indoors where it does not have to contend with the breeze, a fact I find compounded by a preference for a lower flame setting so as to help direct where the heat is going. While it’s bad enough to scorch the sides of a cigar’s wrapper, a redirected flame off a finger doesn’t feel any better.

Keeping that flame in check is done by way of an adjustment mechanism on the bottom of the lighter which requires some sort of implement to adjust. I generally use one of the screwdriver fold-outs from my XIKAR MTX cigar scissors, though in a pinch a thumbnail will work. After the first two weeks of using the F-1 on a daily basis, I didn’t find myself adjusting it very much, if at all, other than to review the settings just to make sure I wasn’t shortchanging what the lighter could offer. Also on the bottom is a somewhat unique feature, a covered butane inlet valve. Essentially, a small metal panel covers the fuel valve and must be flipped up prior to filling, not something that drastically different from what you might find on a vehicle. It’s one of those things I’ve never really considered and is certainly not a common find on the majority of cigar lighters on the market, albeit it is something found more on soft flame lighters than torches.

The other main feature of interest about the Elie Bleu F-1 is the Japanese lacquer that is applied to the body of the lighter in four of the color options, which the company says was selected for its ability to be both beautiful and durable. While it is a bit of a fingerprint magnet, it certainly offers a good bit of visual appeal and has held up well in the two months or so that I have been using it. The micro plated gold finishes show a bit of wear from the occasional scratch or drop, though the lighter still looks quite good overall. There is still a good amount of glisten on the lacquer, and the rose gold does a good job catching and reflecting the light, so if an eye-catching finish is a requirement for you, the F-1—at least in most of the finishes available—should check that box. Additionally, a 40th anniversary limited edition was created, entitled Wealth of the World. Created to celebrate Elie Bleu’s proud heritage, it displays the countries where Elie Bleu products have been sold over the past 40 years by way of details on the front, back and sides of the lighter. Crafted from bronze with patine, it features a combination of Platinum and Black Japanese Lacquer as well as three sapphires. Only 40 of these lighters were produced along with a similarly themed humidor. 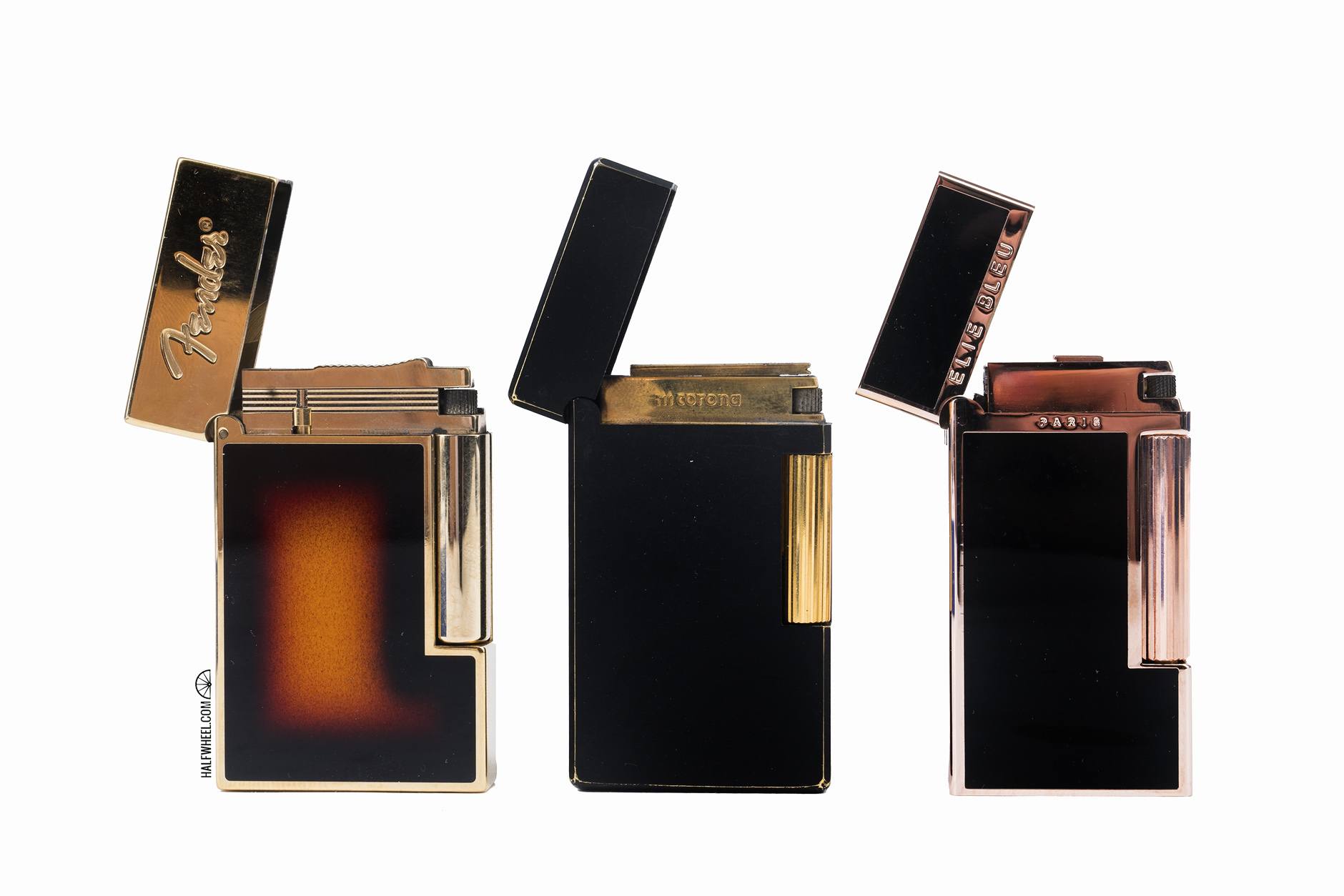 After two months of use, I find myself liking and disliking the Elie Bleu F-1 Wide Flame Flint Lighter for most of the same reasons that I feel about any other soft flame: it’s a classic and classy way to light a cigar that can struggle when challenged by a breeze and lacks the precision of a torch lighter. While it also looks and feels good in the hand, unless you’re willing to point out the three squares on the lid of the company’s wordmark on the front, it’s hard to call it a distinctive piece, especially if you’re looking to send out an audible signal when flipping open the lid a la Dupont’s famous ping. This is certainly a cigar accessory designed with the intent to show affluence, something purchased not just for its functionality but for the message it sends to yourself and those around you. While I’m all for that in certain situations, when it comes to lighting my cigars I prefer things that are a bit more utilitarian, both in terms of the performance and price, as I’ve yet to use a lighter that has made my cigar taste or smoke profoundly better than one that costs a hundredth of the price.