Last year, Davidoff released the Master Selection Series, a collection of six cigars based on the cigars Eladio Diaz makes to celebrate his birthday.

Diaz is Davidoff’s master blender and quality control chief, and someone who has gotten an increasingly prominent role in Davidoff’s marketing with the aforementioned Master Selection Series and the Oro Blanco, the company’s flagship $500 release. While Diaz might be the blender for Davidoff, his birthday cigars have repeatedly been described to me as not very much like Davidoff’s typical releases. Notably, they are described as much stronger than a typical Davidoff, a comparison that is probably less and less the case as the company’s production cigars get stronger and stronger.

Over time, I’ve been able to identify blends that are more Eladio-like, cigars like the Oro Blanco and the Year of the Sheep, cigars that retained the Davidoff complexity and balance but with richer and bolder flavors, as well as a lot more nicotine.

As for Diaz’s birthday cigars, he hands them out personally to friends and acquaintances. Up until this past year, I’ve never known one to be banded and from what I gather, there are very few of them made. I’ve been given two of them over the years, this being the first, and I once lost a Procigar auction for 40 of the cigars from various years to Daniel Nuñez, the former production chief at General Cigar Co. It’s a well-rolled torpedo that could easily pass as a Davidoff. Aroma off the wrapper is plentiful: leather, sweet cranberries, some candied plums and a slight barnyard touch. The foot is strong with cranberry juice, Cap’n Crunch cereal, jalapeño pepper and some saltiness. It’s quite similar on the cold draw—sweet, peppery, salty and full: cranberry, passionfruit, wood, meatiness and a sharp pepper at the center of the tongue.

The Eladio Diaz 62 starts with a lot of pink salt on the outside of the tongue and is incredibly rich. There’s a ton of black pepper on the tongue, some faint woodiness, but no real sweetness despite the cold draw. The woodiness picks up in the first inch and begins to soften the blow of the pepper, though the saltiness remains extremely sharp and makes me wish I had some apple juice to cut through it. There’s some sugar, barnyard, cedar, hay and cinnamon while the retrohales are a weird mixture of floral flavors, barnyard, charcoal and some parsley. It’s full in flavor, full in body and medium-plus in strength. Construction is incredible with well over two inches of ash, plenty of smoke and a fantastic draw. 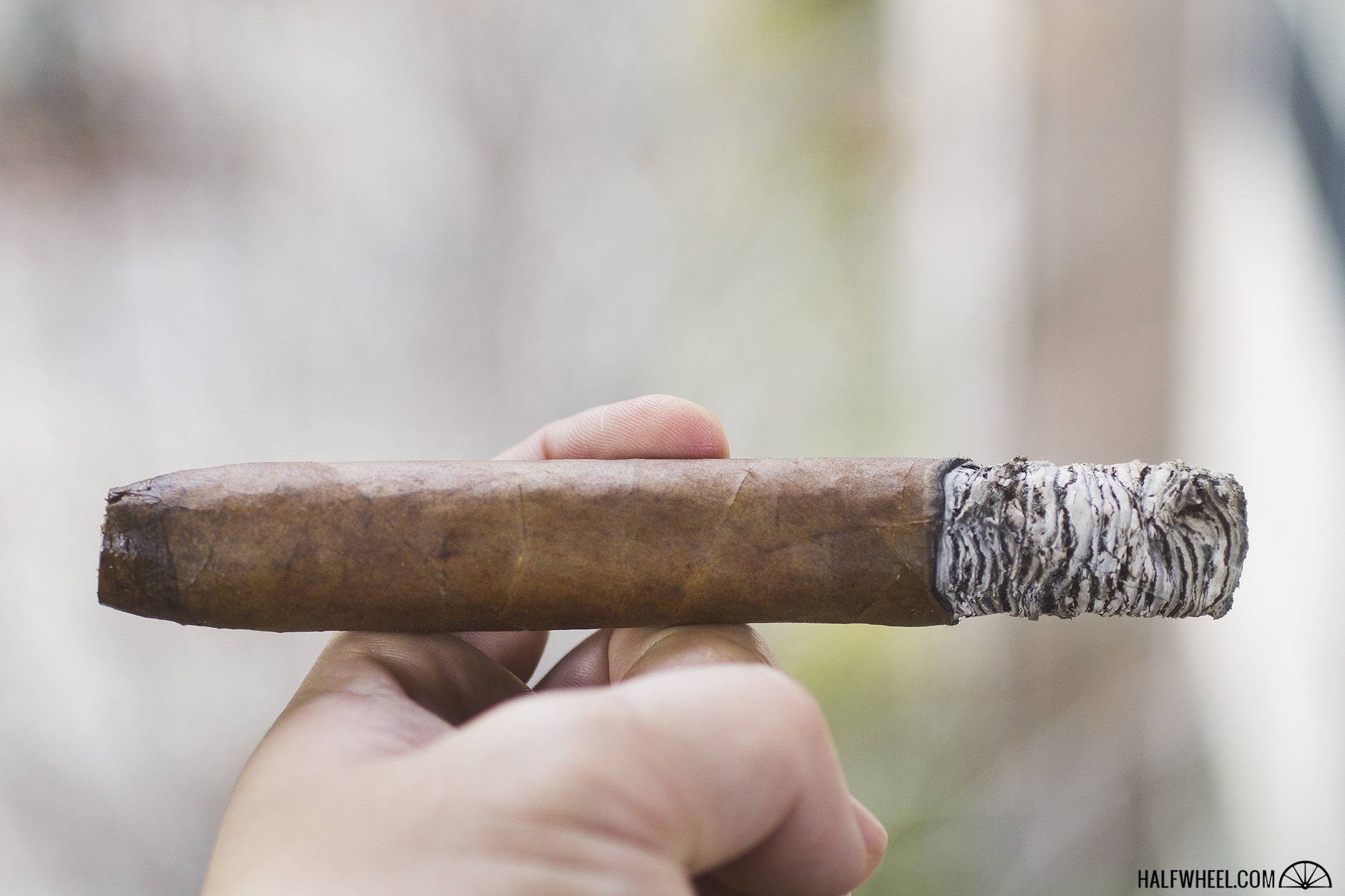 Things smooth out a lot thanks to an increased woody flavor and a retreating saltiness. Right before the midway point it reminds me of Herman Marshall Temptress Single Malt, a whiskey that was aged in barrels that previously held a milk stout. It’s a weird oak, creaminess, vanilla and chocolate mixture. The retrohales have the toastiness, but are joined by pasta, lemon zest, green coffee beans and peanuts. Where the cigar really shines is the finish: rich toastiness, burnt coffee, earth, peanut shells, meatiness and a restrained jalapeño sensation. The flavors have suddenly become incredibly vibrant and increasingly more interesting as the cigar develops. Thanks to an increase in strength, the cigar is now full in every category. Construction remains fantastic. The saltiness returns to the Eladio Diaz birthday cigar, but it’s much more balanced compared to the first third. Cedar is the dominant flavor, slightly beating out the aforementioned saltiness, while the retrohale is creamier along with some leather. Once again, the finish is the star with burnt brisket, leather and a spice mixture all being much richer than the initial flavors, though it’s worth pointing out that those were full. Speaking of full, the strength and body don’t let up either, and the cigar finishes quite different than your typical Anniversario No.2. Back when Skip Martin was pretending to be a cigar blogger, I remember reading a small review he did of the Eladio Diaz 55th Aniversario. From that moment on, smoking one of the Eladio Diaz birthday cigars has become a goal of mine. There aren’t many cigars I would consider personal white whales, this was one of them. It’s not my favorite blend from Eladio Diaz, but the 62nd birthday cigar was fantastic. It’s once again a definition of how a cigar should burn and as I’ve oftentimes found with cigars where Diaz blends to his liking, it tastes nothing like a Davidoff. This was a full-flavored, full-bodied and most certainly full strength cigar. It’s got much of the finesse that I find with some of his cigars, but unlike just every other, it has a combination of raw power and balance that is totally unique. If you can find one—even paying $4,000 for 40 cigars in auction—I’d recommend it, there’s really not anything else I’ve had quite like it.