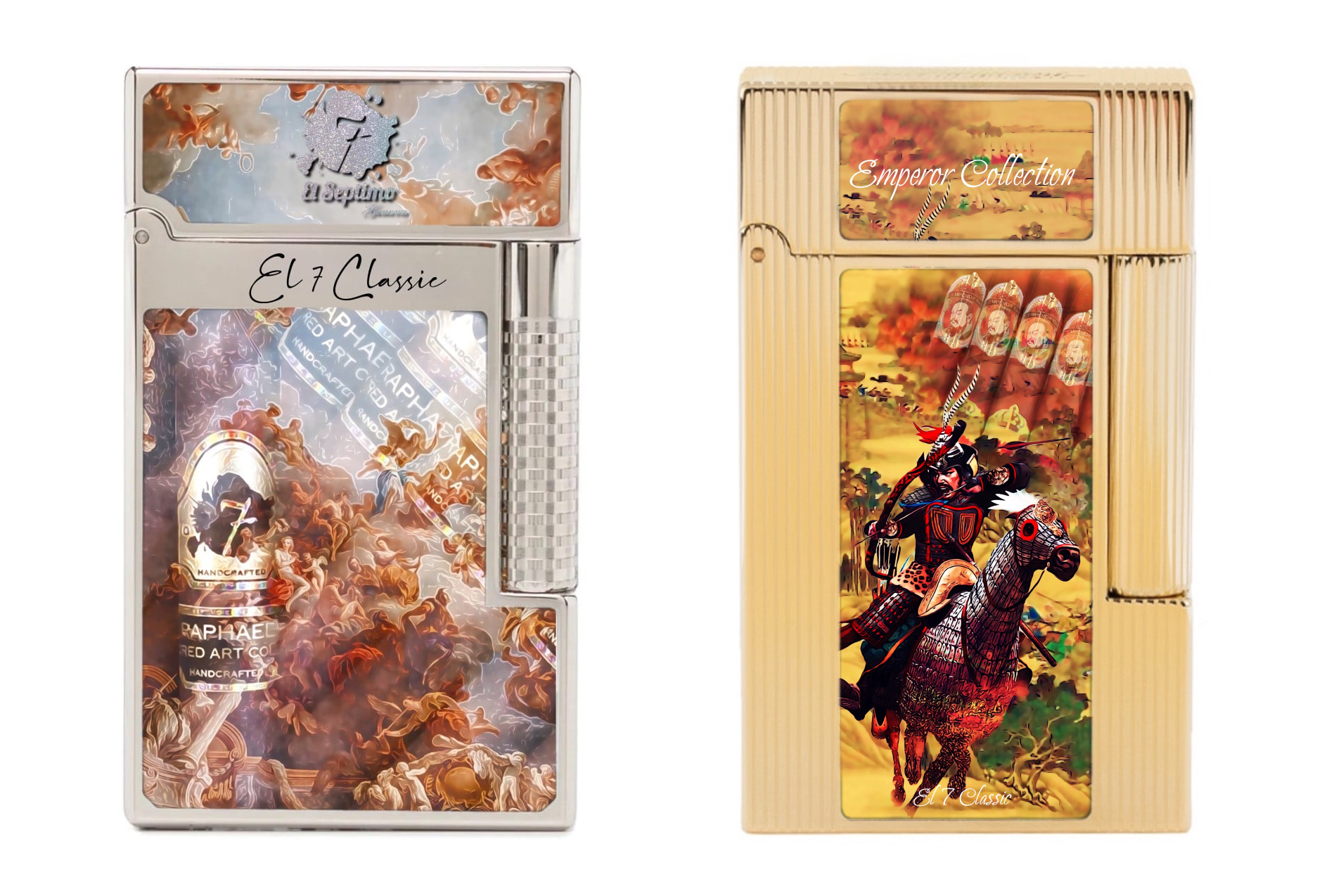 After showing off a trio of lighters that came with price tags of around $5.5 million dollars, El Septimo has announced plans to release a collection of new lighters and pens that will complement its Emperor and Sacred Arts cigar collections, with 10 designs offered for both the lighters and pens.

While all of the designs have not been revealed, the company has released images of two of the lighters, and announced that they will offer both a soft flame and a jet torch, with pricing ranging from $245 to $1,500. Of the 10 lighters, six will be part of the Sacred Arts Collection while the other four will come from the Emperor Collection.

The pens, meanwhile, will be priced from $200 to $750 each. The company has not announced how many designs from each collection will be used, nor has it released any images of them yet.

While the basics of the pens and lighters will be the same across the 10 options, it will be the varied finishes and use of precious stones and metals that will be responsible for the variation in prices.

The new pieces were designed by MPA Studio de Creation, La Maison Younan’s design agency in Paris, and represent the company’s launch of its own tradition in the luxury lighter and pen segments.

“We wanted to create the world’s most luxurious lighters and we were successful at doing so by creating a collection of masterpieces that captivated the world’s attention in July at the PCA show in Las Vegas,” said Zaya S. Younan, chairman & ceo of Younan Properties and El Septimo, via a press release. “Now we want to introduce more affordable, everyday luxury lighters and pens that will stand out in comparison to the other products available today.”

Younan went onto say that he had grown tired of seeing the same old designs in lighters and pens, often ones that have not changed over the course of decades. “Lighting a cigar is a special ceremony and soul-searching process, so I wanted to let consumers use a lighter worthy of the occasion, not the typical lighters that we use to light our campfire with. We wanted a product that would surprise our customers, seduce their imagination, and show them that we have reached the pinnacle of our profession,” Younan said.

In addition to the multi-million dollar lighters that it featured at the trade show, El Septimo released an Emperor Collection pen that is covered with 24 karat gold, and designed by French artist Michel Audiard. It is part of a humidor that comes with 20 of the Emperor Collection Napoleon Royal Salomon cigars. That release is limited to just three sets, each priced at $100,000.

The company is scheduling the lighters and pens to ship in December, just ahead of the holiday season.

The Sacred Arts Collection was released in August 2021 and is made up of seven cigars that celebrate seven of the greatest works of art, while the Emperor Collection made its debut at the 2022 PCA Convention & Trade Show, with its cigars named for five historical emperors. That line is scheduled to ship to stores on Sept. 1.