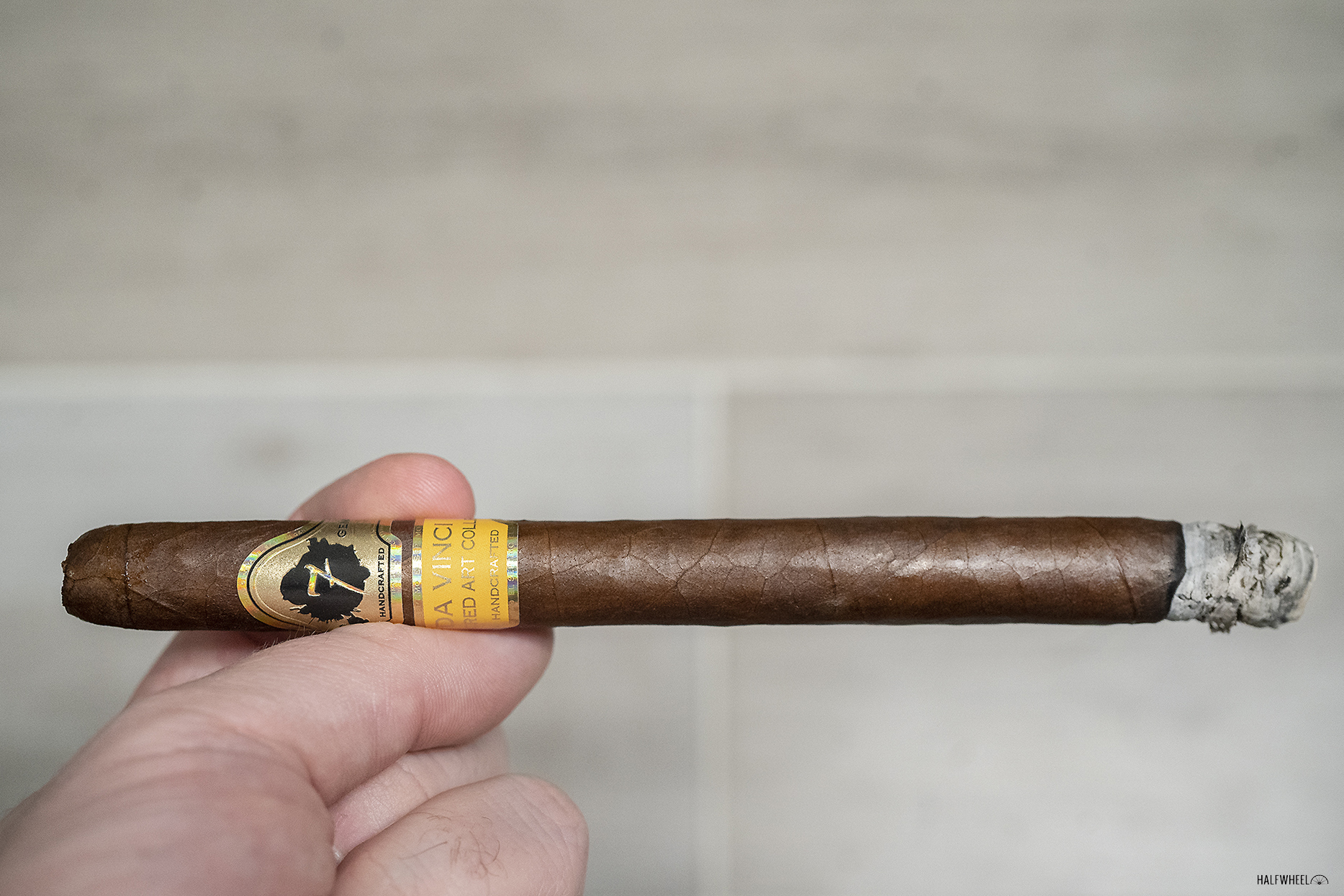 If you’re going to create a new series of premium cigars, there are worse places to turn that some of Western civilization’s greatest painters and some of their most famous works. That is exactly what El Septimo Cigars did in the summer of 2021 when it announced its Sacred Arts Collection, a group of seven cigars that represents the biblical story of the seven days of creation and is dedicated to a famous painter and one of his famous works.

Each of the seven cigars comes has a unique blend, size and price, and while each cigar is offered in 20-count boxes that features the art work that inspired it, each gets its own color. In the case of the El Septimo Sacred Arts Collection Leonardo da Vinci, it is a bright yellow box and band.

The company also released a sampler that contained two of each of the seven cigars, making for a 14-count offering that comes with an MSRP of $310. That sampler is also named for an artist, specifically the Florentine painter Masaccio, and his painting of St. Andrew.

“We are excited to demonstrate our capabilities of continuous innovation and lead the industry with our comprehensive line of new cigars and accessories,” said Zaya S. Younan, chairman and ceo of Younan Company, the parent of El Septimo Cigars, via a press release when the line was announced.

The line is produced at the company’s factory in Costa Rica. 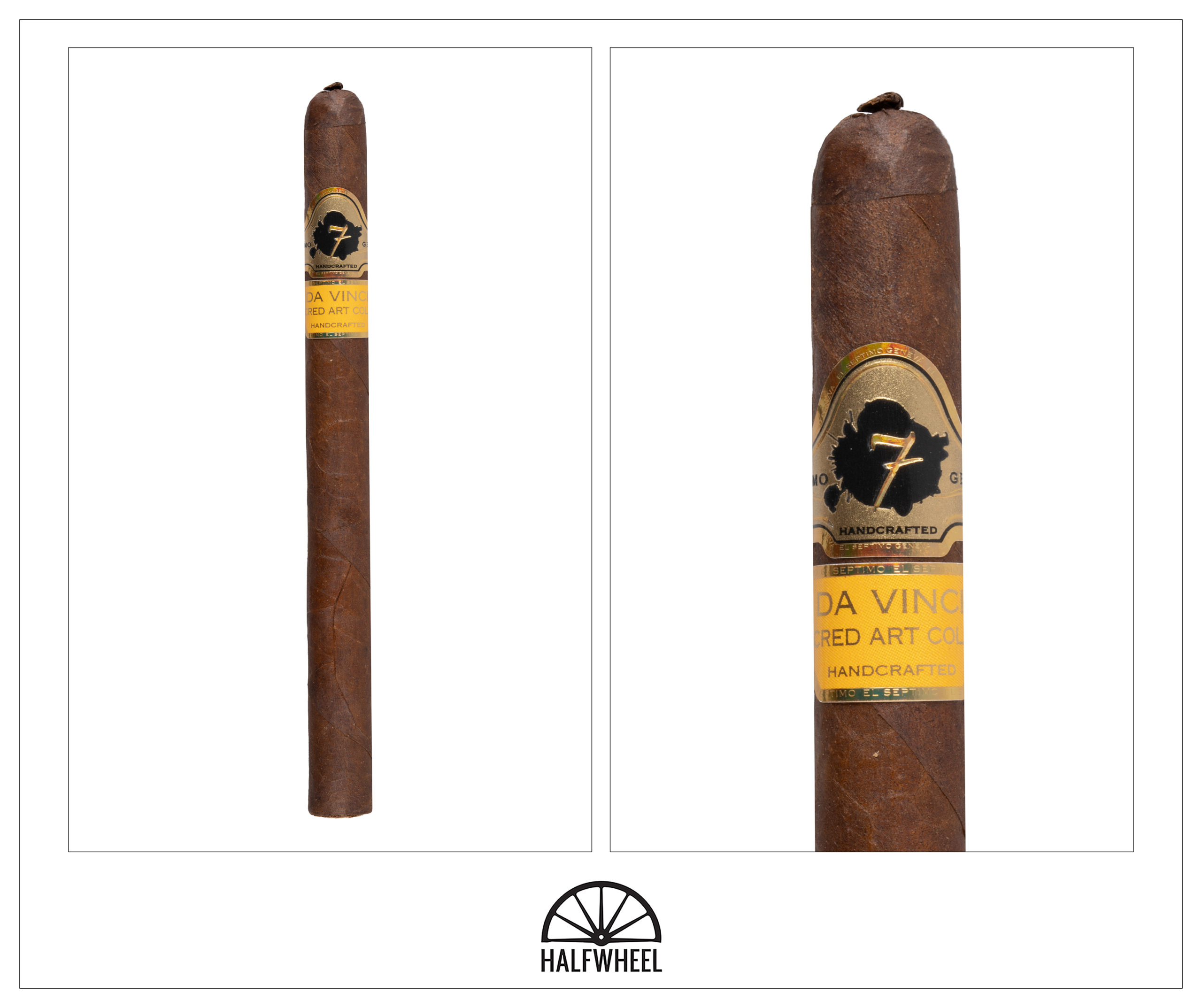 The El Septimo Sacred Arts Collection Leonardo da Vinci feels just a bit thicker than the standard lancero, which isn’t a surprise given it is a 40 ring gauge as opposed to the 38 ring gauge of what I would refer to as traditional lanceros. The cigar looks quite good, rolled well with flat seams, no visible issues and a small fan cap. Each sample has just a bit of give and is consistently firm from head to foot. The wrapper is a dark, meaty brown, and each leaf has some oil to it that gives a bit of sheen as well as a slightly waxy slickness. The wrapper’s vein structure is fairly average, as they are noticeable but not obtrusive. What is noteworthy on one sample is what looks like some water spots, about a dozen fairly small ones and some more prominent ones. The foot has an aroma that reminds me of freshly made jerky, as it’s meaty and has a bit of tangy sauciness, though it’s not overly sweet or peppery. When that particular aroma is mellower, a bit of dry, unshelled peanuts come through. The cold draw is on the firm side of the spectrum in two samples, but it doesn’t seem to be problematic or concerning. The third sample is much closer to ideal, and what I would hope for from every cigar. It doesn’t have as vibrant of an impact as the aroma did, as I get a mild combination of dry Cheerios and a bit of sweet creaminess, close enough that I could make the case for the final bit of a bowl of cereal.

The El Septimo Sacred Arts Collection Leonardo da Vinci starts out quite vibrantly, though not necessarily consistently. One cigars is impressively rich, almost reminding me of a chocolate and fruit dessert pastry, especially when it comes to the fruit. I get a thick cherry flavor and a thinner milk chocolate or confectioners chocolate, while pepper is left to be delivered by the retrohale, with a decent black pepper through the nose in the first inch. Another sample is drier and more pepper forward with a trailing dry earthiness, while the third is about 25 percent of the first and 75 percent of the second. A bit of woodiness joins the flavor past the one-inch mark; one cigar has me thinking of cedar, while others are more along the lines of dry firewood. The retrohale dials back the pepper a bit, and in its place comes a bit of orange peel, which for a moment makes the overall aroma smell like an Old Fashioned for a few puffs until some smokiness shifts the direction. That Old Fashioned sensation doesn’t completely leave the senses, returning on occasional puffs as the burn line approaches the second third. Construction and combustion are both great in the first with no problems in any area. Flavor is medium for the most part, body is just shy of medium, and strength is relatively mild.

The start of the second third seems to finally push out the Old Fashioned sensation, largely by way of the orange peel departing and the arrival of a more pronounced pepper through the nose. While it pairs well with the dry earthiness of the flavor, the combination isn’t the most palate-coating or palate-soothing, which in turn has me thinking that a beverage of some sort would be warranted if not necessitated. While there’s a bit of mellowing in that flavor and its intensity as the burn line approaches the midway line, and when the El Septimo Sacred Arts Collection Leonardo da Vinci’s burn line gets across the midpoint, it is abundantly clear that the direction of the flavor profile has changed, as it is now much more robust. The flavor is driven by a rocky black pepper and a bit of rocky earth, giving each puff the ability to elicit a more pronounced physical reaction from the taste buds than it did in the first third. A bit of chalk comes into the earthiness as this section comes to a close. Flavor is medium, body is medium, and strength is medium-minus. A few combustion issues begin to emerge in this section as it feels like the cigar either can’t make up its mind to the puffing rate it needs, or can’t consistently communicate it to me. The burn line is good, while smoke production is below average. 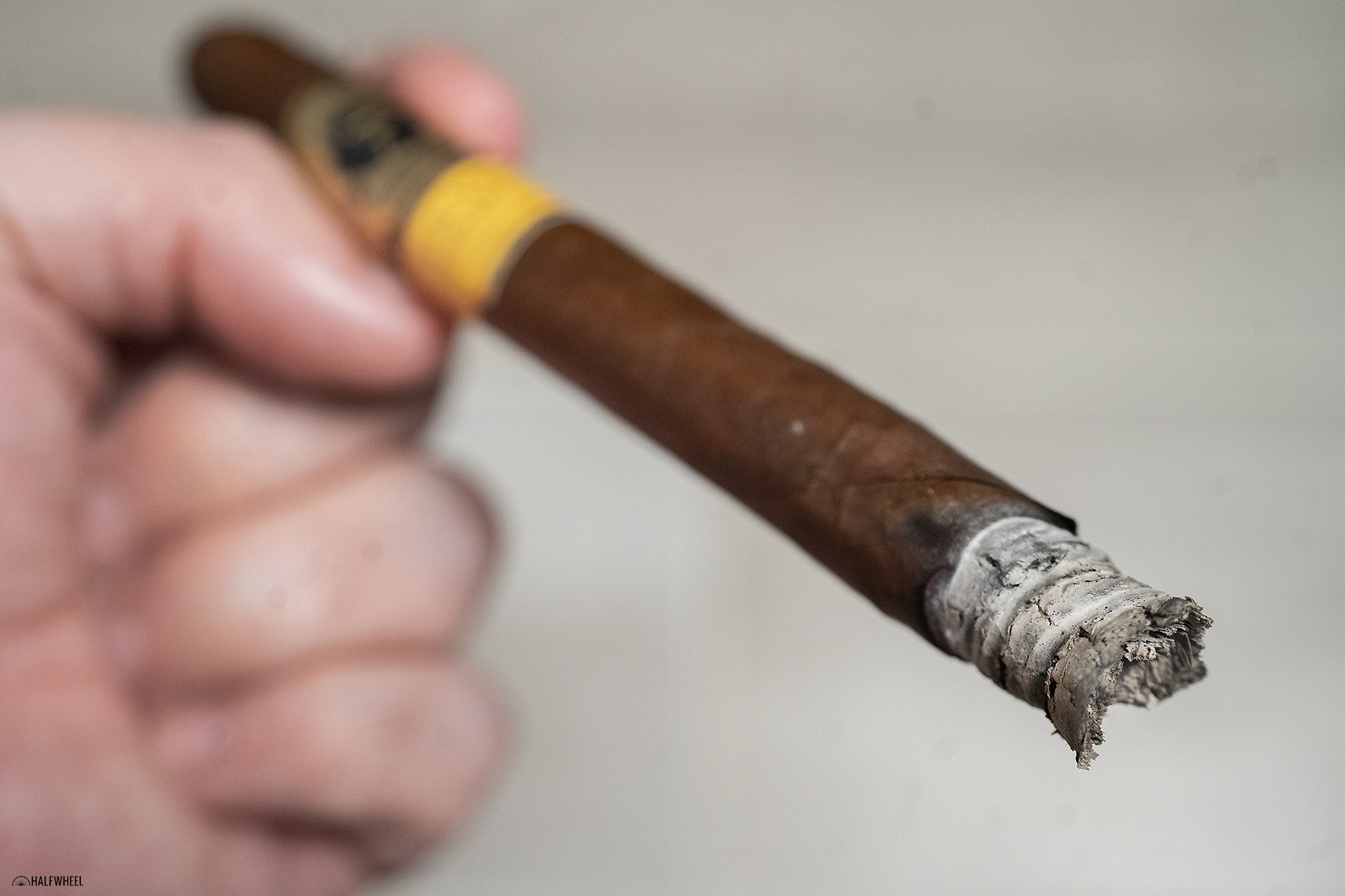 The final third of the El Septimo Sacred Arts Collection Leonardo da Vinci starts by trying to swing the pendulum away from the overt robustness of the second third, and while at times it seems like it’s heading back to the first third, it’s not quite on that track. The chalkiness and orange peel play a bit of tug-of-war, while retrohales pick up a bit of white pepper. A stripped-down earthiness takes increasing control of the flavor as the burn line progresses, and while the flavor holds its intensity, it loses a good bit of its complexity. Some dry wood tries to remedy that to moderate effect, while creaminess comes in during the final inch or so to soften the landing and bring the cigar to its conclusion. Flavor finishes medium-plus, body is medium, and strength is medium. Combustion isn’t inherently problematic but isn’t as consistent as I would like, meaning smoke production is inconsistent but good, and the burn line is still quite even. 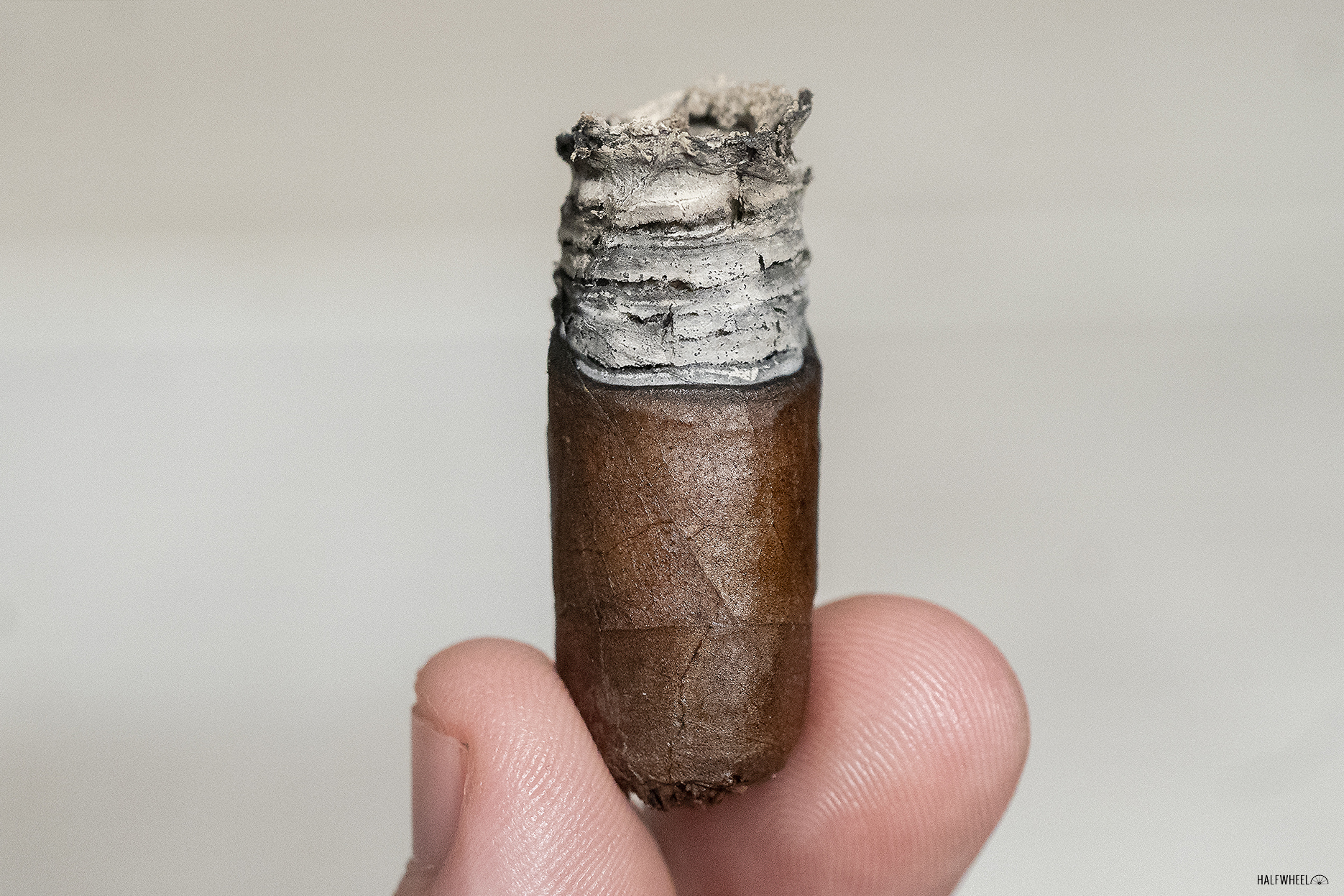 If the El Septimo Sacred Arts Collection Leonardo da Vinci could have given me more of what the first third of the first sample gave me, I have to think this cigar would have received one of the highest scores I’ve ever given a cigar. I’m still not sure what to make of it, whether my palate was just hypersensitive that day or if that cigar was simply an outlier among its peers. Regardless, the process calls for the entirety of all three samples to be considered, and while not as great as that one section, there is still a good amount to like. As noted above, the smoky Old Fashioned note was a lot more consistent, as was the transition from a sweeter, more complex first half to a simpler, more robust profile in the second third. I definitely prefer that first half, but the second half is still enjoyable and could be a good complement to a number of beverages if that’s your thing. Construction and combustion were decent but not perfect, and probably cost the cigar a point or two due to a tight draw and some burn issues in the second third, so if you decide to smoke this cigar, I’d consider giving it a bit of dry boxing before smoking if possible. Overall, this is an enjoyable smoke and one of the better cigars I’ve smoked from the El Septimo portfolio.