If you read the title of this review and thought to yourself, I have no idea where Andorra is, let me save you the search. It’s a very small country—just over 180 square miles—located between France and Spain in the Pyrenees Mountains. It’s also known for a few key things: skiing and its very friendly tax laws.

As such, the country is known for its relative wealth of shopping, from high-end fashion to jewelry, as well as cigars. It was partially due to this tax status that Maori Tabacs owes its creation, as in the 1960s, company founder José Maria Cases set up a factory to wrap Cuban cigars in cellophane to help protect them from the elements in Andorra. He then went on to become the Habanos S.A. representative in Andorra in the late 1960s, which led to the creation of Maori Tabacs S.A., which today is the exclusive distributor for the domestic and duty-free markets in Andorra. In 1999, Cases was awarded the prestigious Hombre del Habano award by Habanos S.A. for his long-standing and beneficial relationship.

As a reminder, to receive an Edición Regional release, a distributor selects one of the 17 local and niche brands, a size that appears elsewhere in the Habanos S.A. portfolio but not in that marca’s regular production offerings, and then fronts the cost for the cigars to be produced. For this release, Maori Tabacs commissioned 2,400 sliding lid boxes, each containing 25 cigars, for a total production of 60,000 cigars. The El Rey del Mundo Petit Cayo certainly fits the petite bill, measuring just over four inches long and feeling fairly short both visually and in the hand. The cigar’s wrapper is sound but not the prettiest leaf I’ve seen with a smattering of small veins, color variation along the seam lines and an overall look that just isn’t as clean as one might expect. One sample is particularly banged up, something I’m attributing to transit as well as cracked feet on all three samples, but it’s not helping the cigar’s visual cause either. As for the roll, it’s generally firm with the exception of some softness found in each sample, one at the foot and another at the head, while the caps are applied decently if not exceptionally. While I have a number of issues with the appearance, the aroma of the foot of the cigar quickly dashes those by way of a rich yet light white bread note that has just a bit of butter sweetness. The cold draw ranges from very good to a bit tight, seemingly due to the tobacco at the head in one sample, while the flavors are subdued yet keep the white bread note front and center.

The first few puffs of the El Rey del Mundo Petit Cayo aren’t particularly noteworthy or attention-grabbing, as they are fairly neutral with notes of warm toast until some hearty black pepper comes in to direct the show. I want to say that there’s a bit of youth here, which shouldn’t come as any surprise and has me wondering how much it will affect the overall experience. A few early retrohales prove to be enjoyable and complementary to the flavor, delivering some fairly mellow white pepper that provides a gentle tingle to the nostrils before increasing in potency over the first inch of the cigar. As they build, they take on a hotter character, almost chili pepper-like heat, so I find myself returning very sporadically. The ash on the first cigar was incredibly fragile, with the first clump breaking off at about a nickel’s width and surprising me with its sudden departure. The first third continues to stay fairly restrained with the bread and generic tobacco note providing the flavor and a bit of peppery kick through the nose. The construction has generally been decent, save for the draw on the first cigar, with all three keeping an even burn line and good smoke production. While there’s a fairly generic note of tobacco that permeates much of the flavor profile through the first third, the second begins to shift towards mixed nuts, though with a bit of smokiness that turns to char. Black pepper adds to that mix, with the profile getting a bit too robust at times and slightly grating on the back of the throat. Through the midpoint, I’d peg the flavor at medium-plus to medium-full, though there doesn’t seem to be much strength from the cigar, settling at medium-minus. The flavor in the final puffs has an interesting complexity that mixes a bit of smoked honey, toast and black pepper that I can’t say I’ve found much elsewhere but that works here. The draw gets a bit tighter entering the final third, and each draw seems labored and not of much help in advancing the burn line. 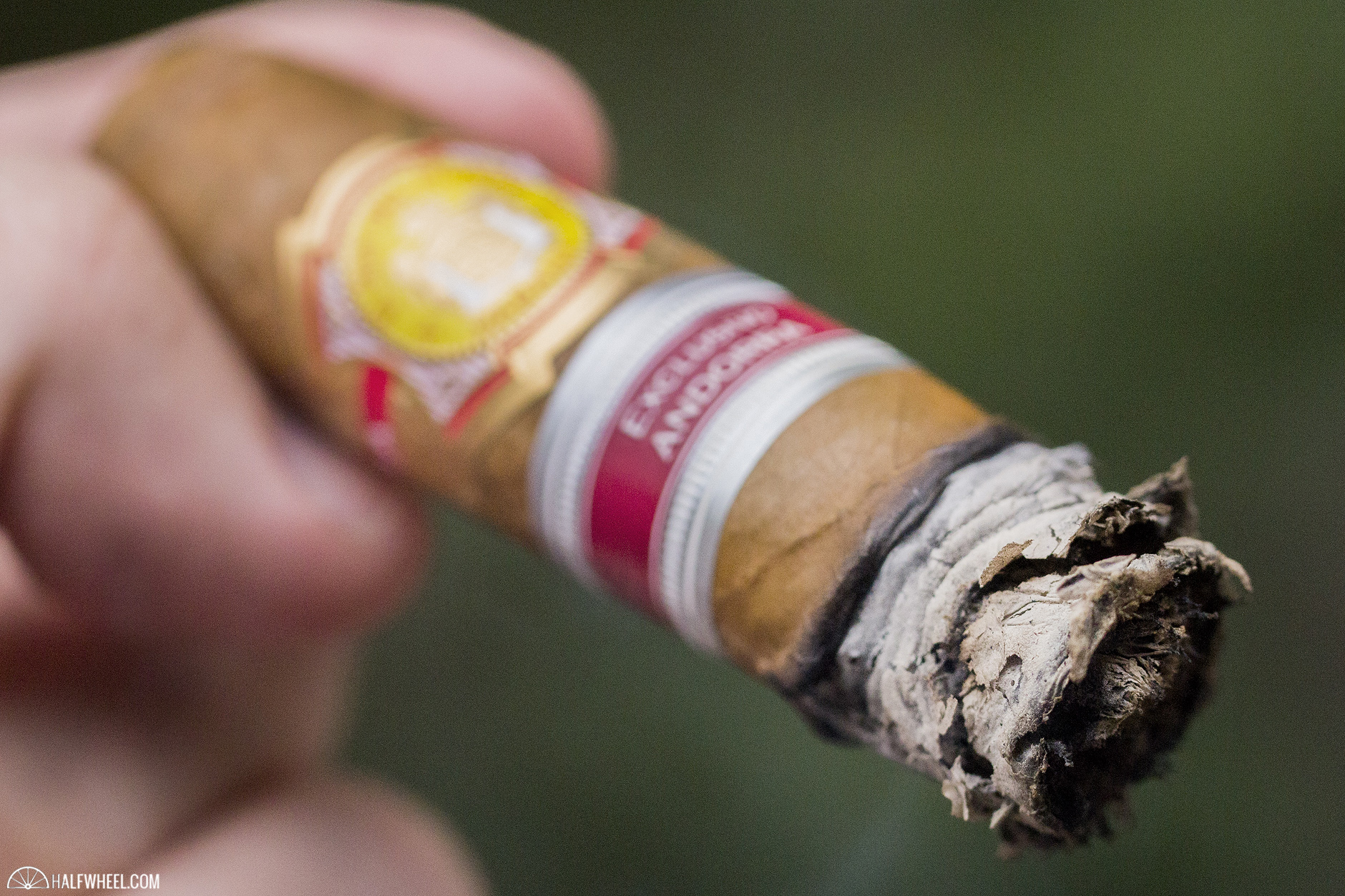 The first and third samples really struggle with the wrapper holding together, as removing the bands seemed to damage it and it is now giving me with cracks and flaps of tobacco along one side. On the first sample, the draw continues to be labored, possibly the most labored to this point, and with the wrapper falling apart on the first sample, I’m not really sure how well the cigar is burning. While the burn is even, beyond that, it’s a mess. The flavors diverge here among the three samples, with the first getting rough and are now showing more of the youth, as pepper has turned to irritation and I’m struggling to get to a reasonable end of the cigar. Thankfully the other two don’t do this, though the second one develops an overbearing chalky note that finishes with a lingering tingle on the inside of the lips, while the third cigar held closest to the flavors from earlier and thus the most palatable even with the wrapper disintegrating more with each puff. Two of the cigars get put down much earlier than I would like, while one makes it to a fairly small nub, but between the flavor and wrapper issues, the final third leaves quite a bit to be desired. As much as I wanted to like the El Rey del Mundo Petit Cayo, there were just a few too many issues with which to contend to get a favorable mark at this point. The flavors seem a bit underdeveloped and still in their relative infancy, yet to bloom into whatever this cigar could truly become, with the future given just the occasional sneak preview. Thankfully youthful harshness was minimal, though there are some spots where it is clear this cigar needs more time in the humidor resting to rid itself of what it does half. The fragility of the wrapper only compounded the issues, with just one of the three samples staying intact enough to be smoked down to a satisfactory conclusion. While I'm hesitant to say that all this cigar needs is time, it could become something much better than what it is now, which is what I'm left hoping for should I find myself the opportunity to return to it down the road. For now, it falls into the all-too-populated of Edición Regional releases that fail to live up the seeming hype that accompanies them.