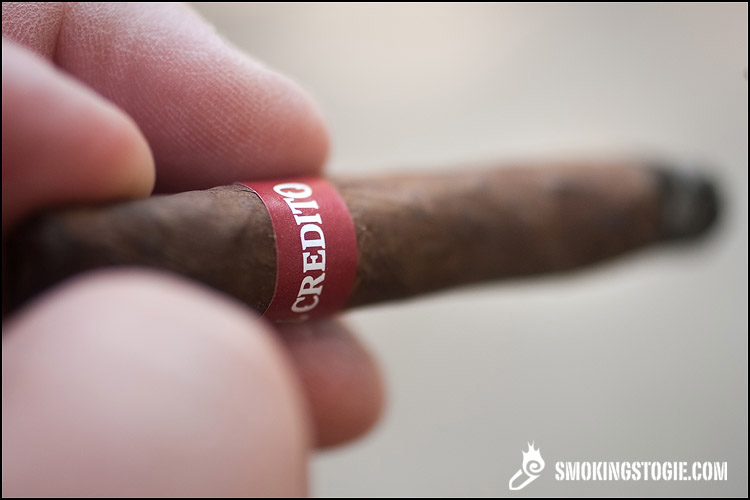 With the economy not showing many signs of making a full recovery any time soon, there’s been more and more releases of sub $3 Cheroot-sized cigars as of late, usually in about the same size/shape. The cigars in this category are typically small, usually around 5-6 inches, and under 40 RG, are sold usually sold in cabinet of 50 and are usually (as in the case of the War of Flavors) unbanded.

The El Credito El Perrito (which translates to the Little Dog) War of Flavors is just such a cigar.

(The War of Flavors) is the brainchild of  Robert Batista and Juan Almonte, the factory supervisors at the El Credito factory in Santiago, Dominican Republic. They “brought their concept for a small, powerhouse cigar to El Credito’s Michael Giannini (director of marketing) and Yuri Guillen (director of manufacturing). The supervisors came to Michael and Yuri, raving about how they made the cigars and describing the taste experience as a battle of flavors in the mouth.

El Credito is the name of the Dominican factory that produces La Gloria Cubana for General Cigar Co. Some may remember El Credito as the Miami factory that Ernesto Perez-Carrillo Jr. made famous for La Gloria Cubana, which is also true, although that factory is now closed. General now operates a factory in Santiago, DR under the same name, which is where the War of Flavors is made. This is by no means the first time “El Credito” has been used as a label, General still produces a bundle brand to this day called, “El Credito.” In addition to the unique shape and packaging, the cigar is comprised of only two filler leaves, which is a bit different than your typical cigar which usually has three or more, or seven in the case of the Dirty Rat.

The 50 Count Cabinet that the War of Flavors come in look like this: My Initial impression is that this is a ROUGH cigar. Rough looking, rough to the touch and obviously made by hand — bumpy and not exactly straight. (There is little doubt that these are made by some of the junior rollers, a fairly common practice at most factories.) It has a dark mocha brown color wrapper with mottled spots and veins up and down its length. It is rock hard when squeezed, with no give at all. Wrapper smells slightly of cinnamon, spice and wood…

The First Third starts with a nice amount of spice up front and flavors of sweet wood, coffee and a bit of creaminess. There is a small amount of sweet chocolate as well, but it comes and goes. The flavors stay fairly constant throughout the cigar, although there is a bit more spice and pepper on the retrohale in the second half.

This is also a cigar with a surprising amount of strength, especially considering its size. It started out fairly mild/medium, but ramped up to a solid medium plus by the end of the cigar. Even though I smoked it down to a nub the size of my fingernail, it did not get hot or harsh at all. 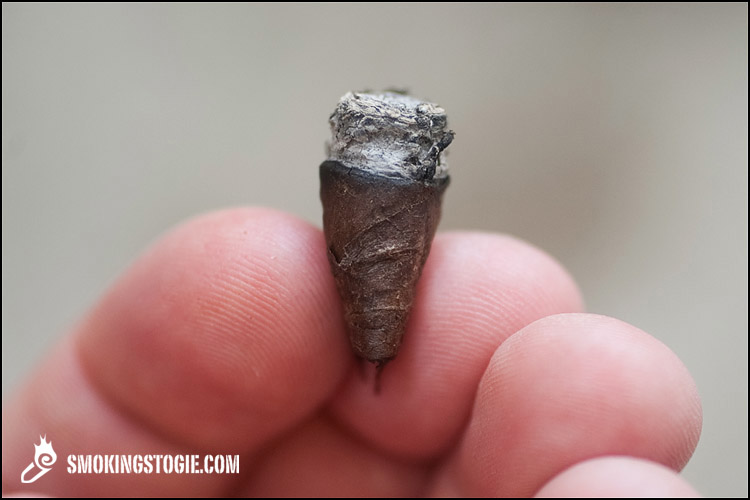 The Bottom Line: I am a big fan of the size of these category of cigars, (as well as the price), and I was hoping that the El Perrito War of Flavors would give some of my favorites a run for their money. Sadly, this was not to be. While I enjoyed the smoke, there is almost nothing I like about this cigar more than the others that cost the same. Unfortunately, the manufacturers were being a bit overgenerous with the War of Flavors name, and while not a horrible cigar, for about the same amount of money I will be buying the J.Fuego Origen Original (or better yet, the newly released Sangre de Toro Original) or LFD Icepick every time.