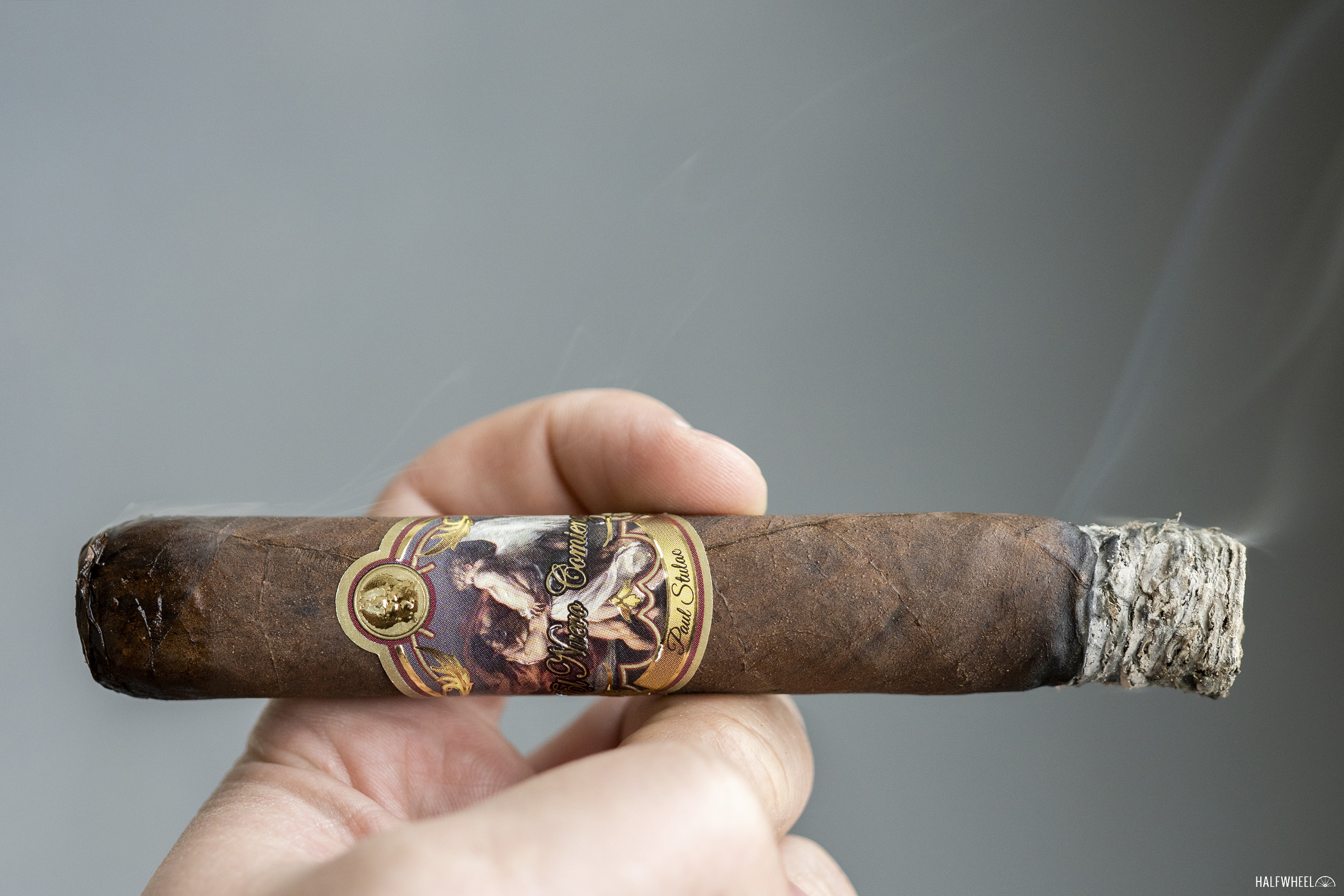 Earlier this year, Stulac changed his approach and sent two new cigars to Privada Cigar Club, an online cigar monthly subscription program and retailer. The idea was that the club would be able to pick which blend would become an exclusive to Privada while the other would be sold through Privada’s wholesale distribution arm, the Limited Cigar Association.

Both cigars are called El Nuevo Comienzo, Spanish for the new beginning. Both share similar packaging, though the blends are different.

The blend chosen by Privada is now known as the El Nuevo Comienzo Privada Limitada by Paul Stulac, a 5 x 54 that uses a Mexican San Andrés wrapper over a habano 2000 binder and Nicaraguan fillers.

A slightly larger cigar, 5 1/2 x 54, is known as the El Nuevo Comienzo Paul Stulac Exclusiva, with no use of the word Privada. It uses a Connecticut broadleaf wrapper over a corojo 99 binder from Jalapa, Nicaragua, and fillers from Nicaragua. 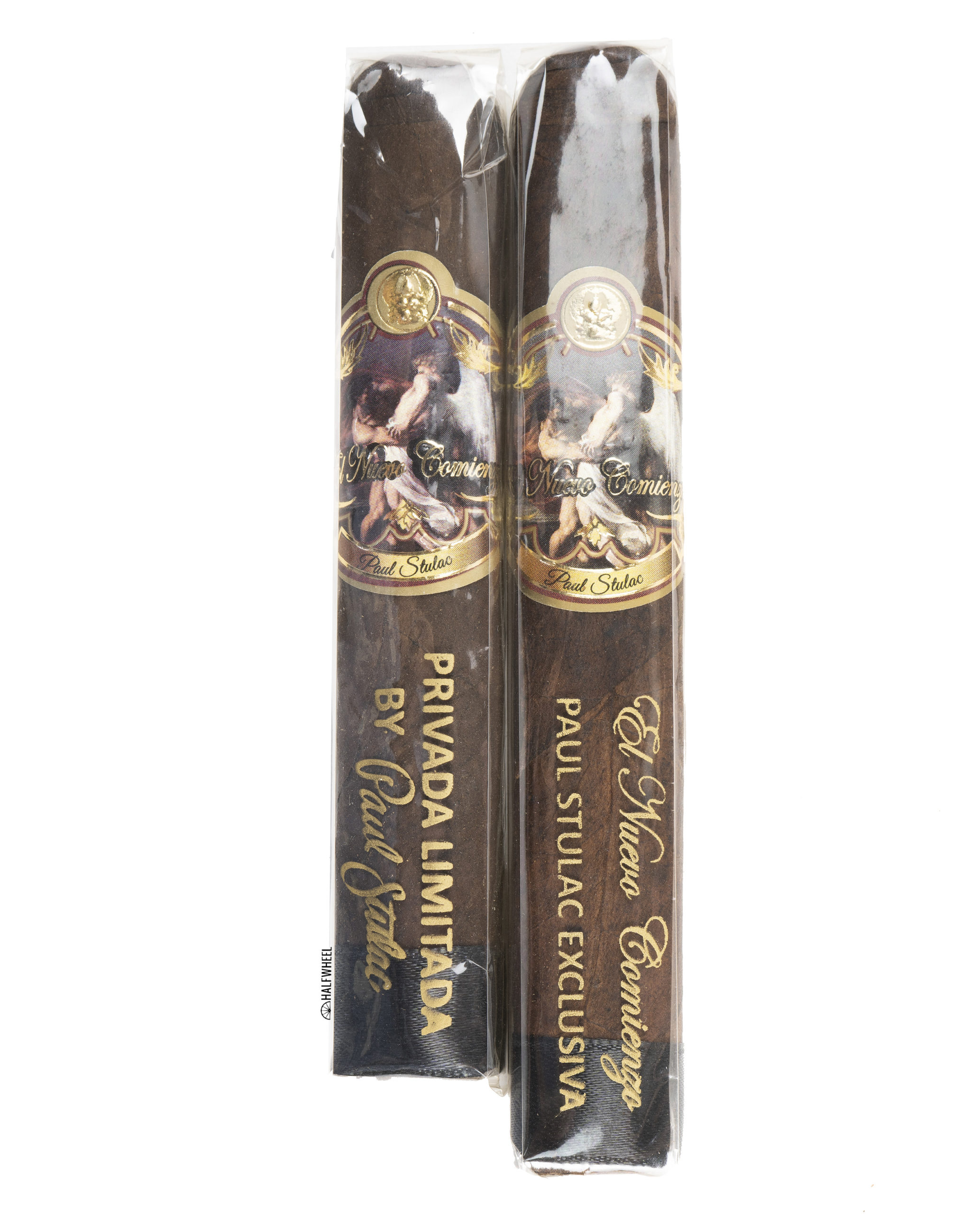 It’s expected that there will be other sizes for both blends in the future. The El Nuevo Comienzo Paul Stulac Exclusiva—the one that I’m reviewing—is expected to get at least a torpedo and toro vitola next year.

Both cigars are made at Tabacalera La Perla in Nicaragua. 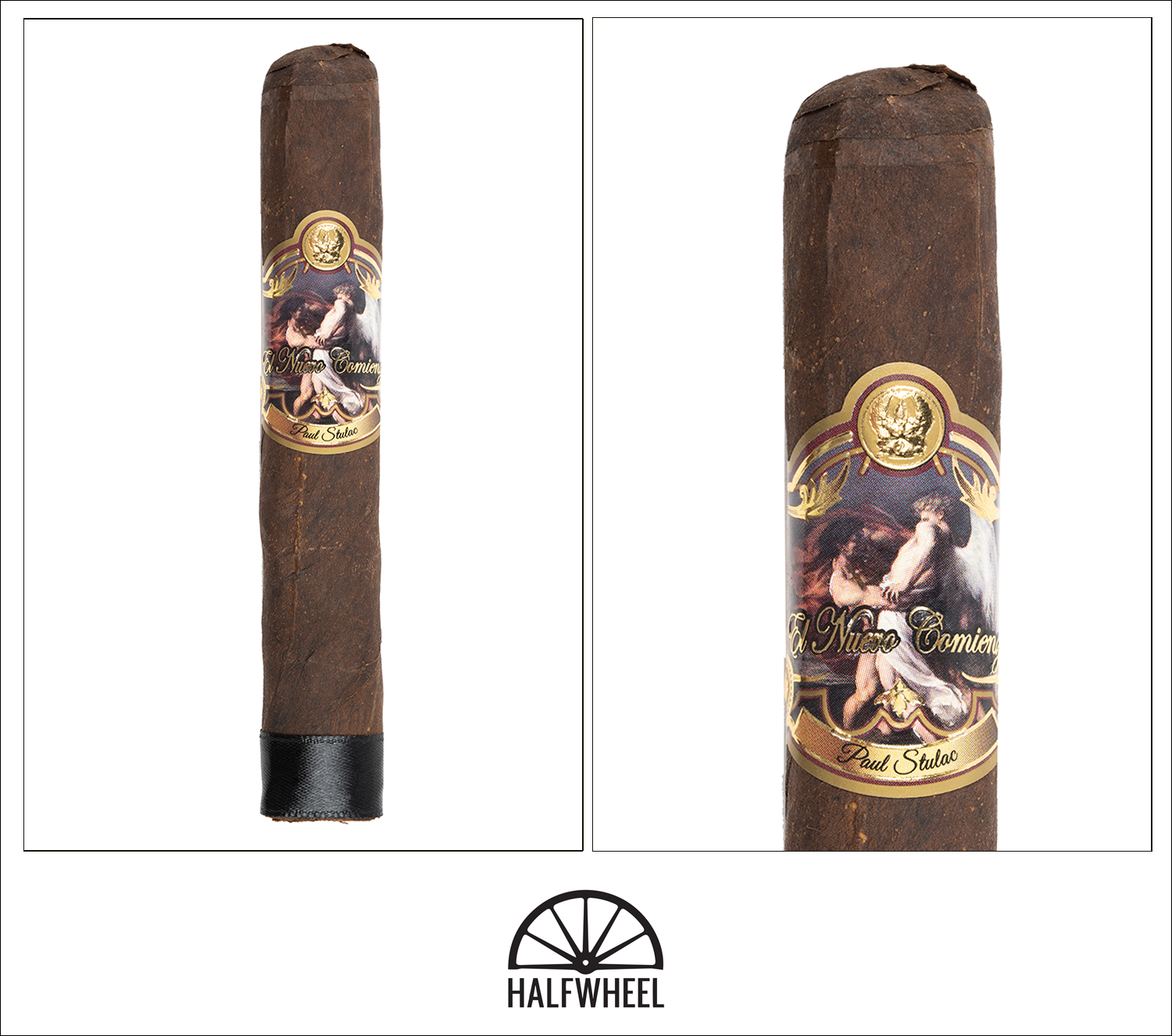 While there’s writing on the cellophane of one of the most popular cigars, the OpusX, it’s still a bit odd to see it outside of some sort of wedding cigar. That being said, it’s nice to have the writing on it so you can tell the two versions of the El Nuevo Comienzo apart. There’s a lot going on with the band, my personal favorite is a maple leaf medallion, a nod to Stulac’s home of Canada. The wrapper is very dark, though there is a bit of deformity here and there. One sample has a few missing specs of wrapper, another has a small divot and the seams could be better on two cigars. The aroma from the wrapper has barnyard, a bit of a merlot sensation, a fair amount of acidity, and chocolate. Smelling the foot leads to a much fuller aroma with sweet chocolate, soy sauce, raisins and a bit of caramel. The cold draws are varying degrees of open across the three samples. The flavors are pretty consistent with hay, leather, pinewood and a bit of acidity.

The El Nuevo Comienzo Paul Stulac Exclusiva starts with wheat, red pepper and leather. It’s obvious from the first puff that the draw is too open and I wish there was more smoke. Four puffs in, the cigar comes alive and I’m able to get more smoke in the mouth. There’s charred earth, leather, lots of red pepper and some deep cedar. The cedar flavor is a bit odd, sometimes it’s the most dominant flavor while in other puffs it’s not present. The cigar finishes with red pepper, chalkiness, pine and a bit of harshness. Retrohales have red pepper on top of orange peel. They are fuller and more aggressive than the mouth flavor, but the orange peel helps to offset some of the red pepper’s intensity. Flavor is medium-full, body is full and strength is medium. The draw is open, which leads to lots of smoke and quicker smoke times. Fortunately the cigar stays lit, despite meaning I’m forced to smoke quicker.

Right around the halfway point of each cigar, the smoke production begins to suffer. Unfortunately, two samples go out completely, while another one stays lit with the help of a lighter. Flavor-wise, all three cigars are more restrained than the first third, though similar. The one cigar that says lit has a regular earth note, less toasty than before, and the red pepper. On the samples that need relighting, that combination is jointed by some creaminess. There’s a bourbon-like finish with toasty flavors, irritation from the red pepper and some of the earthiness. Retrohales have red pepper, cedar and leather. It finishes with red pepper, leather and harshness. Flavor is full, body is medium-full and strength is medium-plus. I’d like to tell you about all the changes I found in the final third of the El Nuevo Comienzo Paul Stulac Exclusiva, but there aren’t many of them. The one thing that adds itself to the profile is hay, which joins the earthiness and red pepper. It continues to smooth out slowly, though I wouldn’t go as far to say that the profile is ever smooth. The red pepper that has been present from the start continues to be a part of the cigar and nearly every puff leads to some sort of pepper-like burn on my palate. Retrohales have a bit of that merlot flavor, which is some attempt at sweetness though I prefer the orange peel that was once present. Keeping the cigar lit continues to be an issue on all three samples, though it only takes one use of the lighter to get to the one-inch mark. 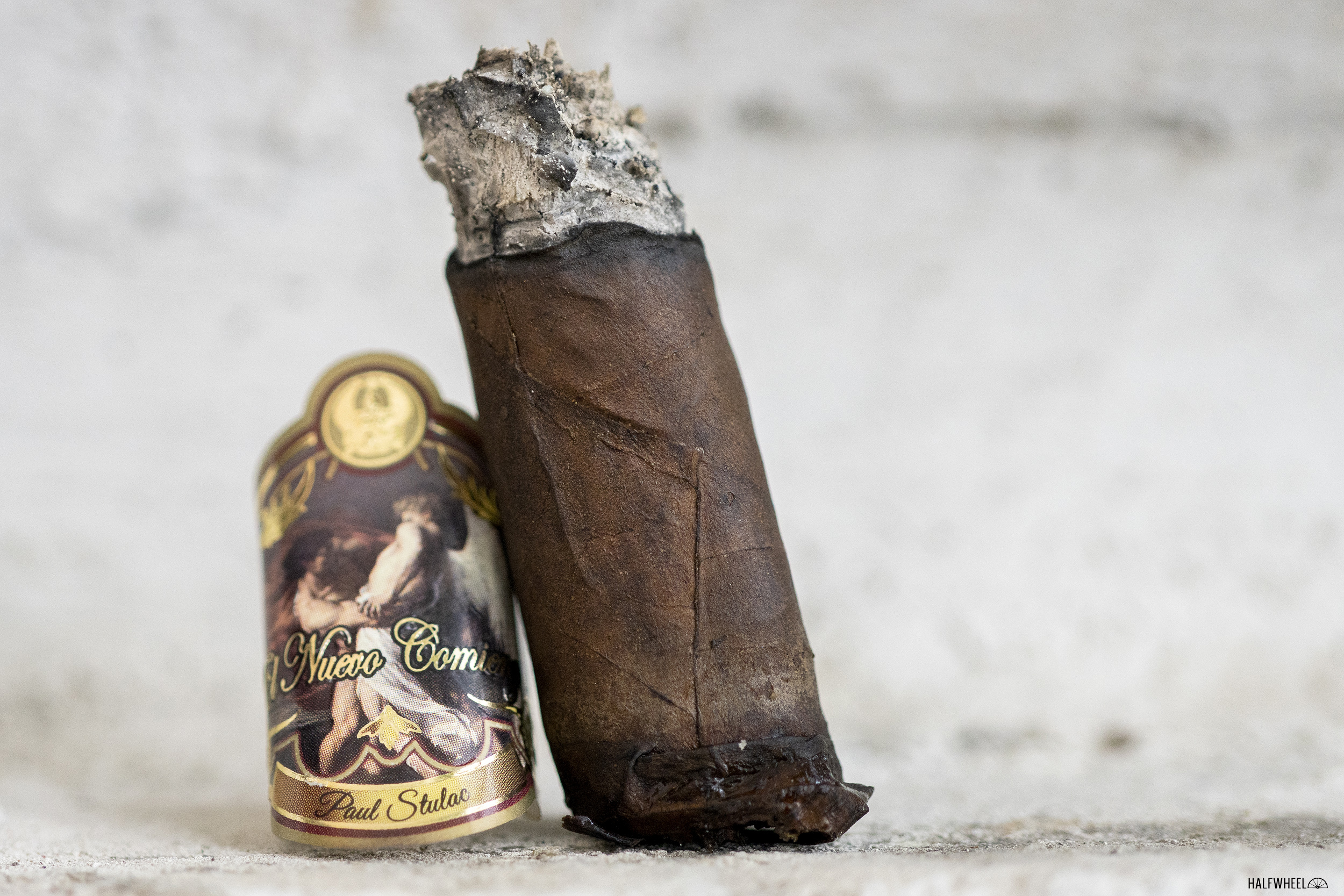 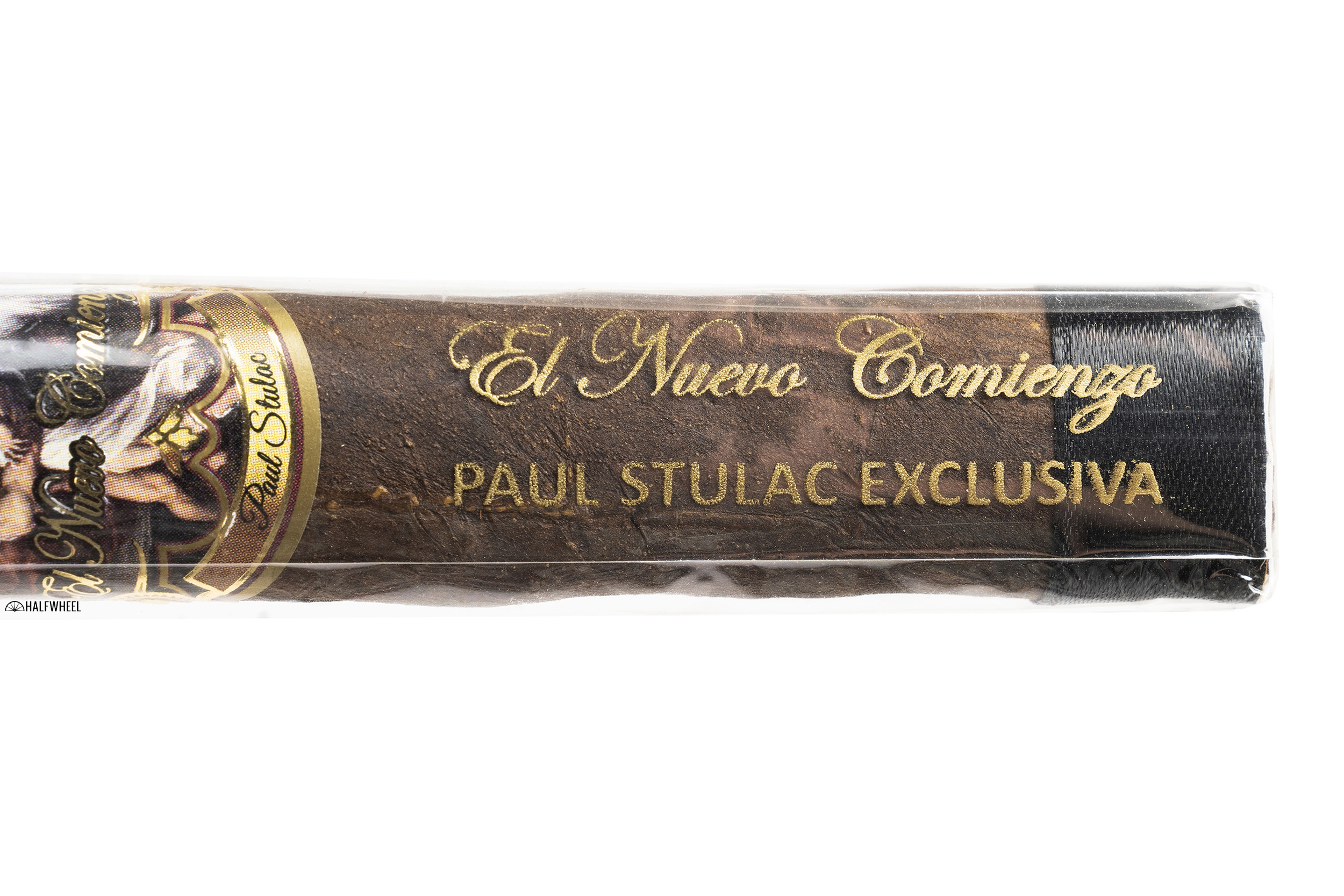 As is the case when there are draw issues, I really don’t feel like I got to taste all of this cigar. I suspect that some of my parting thoughts, namely that the red pepper was pretty aggressive, would probably be the same. But I’m curious to know if there would have been more transitions had the draws been in an acceptable range. For me, the broadleaf seemed to overwhelm the rest of what was going on here, and as such, it was a relatively linear profile. That’s all secondary to the bunching issues as it doesn’t matter how good the tobacco or the blend is, if the tobacco is not put together properly.