In January 2014,  Nicholas Melillo left his job as the evp of international operations for Drew Estate Tobacco Co., after being with the company for 11 years. He immediately established Melillo International, a consulting firm for purchasing tobacco and blending, and stayed on in with Drew Estate in that capacity until May of last year.

Nearly a year later, Melillo formally announced not only the formation of a new Foundation Cigar Co., along with news that his first blend would be composed entirely of AGANORSA tobacco. The news of the new cigar came this July, when Melillo announced El Güegüense, a cigar named after a Nicaraguan folk dance.

The Foundation Cigar Co. website explains the origin of the name:

For five hundred years, Nicaragua has served as a crossroads of cultures, ever since indigenous inhabitants mocked arriving Spanish conquistadors in a colorful, costumed satirical masterpiece called “El Güegüense” (Gwe-gwe-nse), or “The Wise Man.” It is Nicaragua’s signature work of drama, the ultimate expression of its unique history, language, dance, and culture. This Gran Baile, or great dance, continues today, not only in the form of long-held folkloric performances, but in the careful blending of Nicaragua’s tobacco, which is some of the richest, most flavorful filler tobacco in the world.

Blend-wise, the new Nicaraguan puro uses a corojo 99 wrapper from Finca Puntalito in Jalapa and a corojo 99 binder from Finca San Jose in Jalapa along with a mixture of corojo and criollo filler tobaccos from Estelí and Jalapa. The cigars are rolled in Nicaragua at Tabacos Valle de Jalapa S.A. (TABSA) and while they are not a limited edition, only 200 boxes of each vitola are being shipped monthly for the first few months. 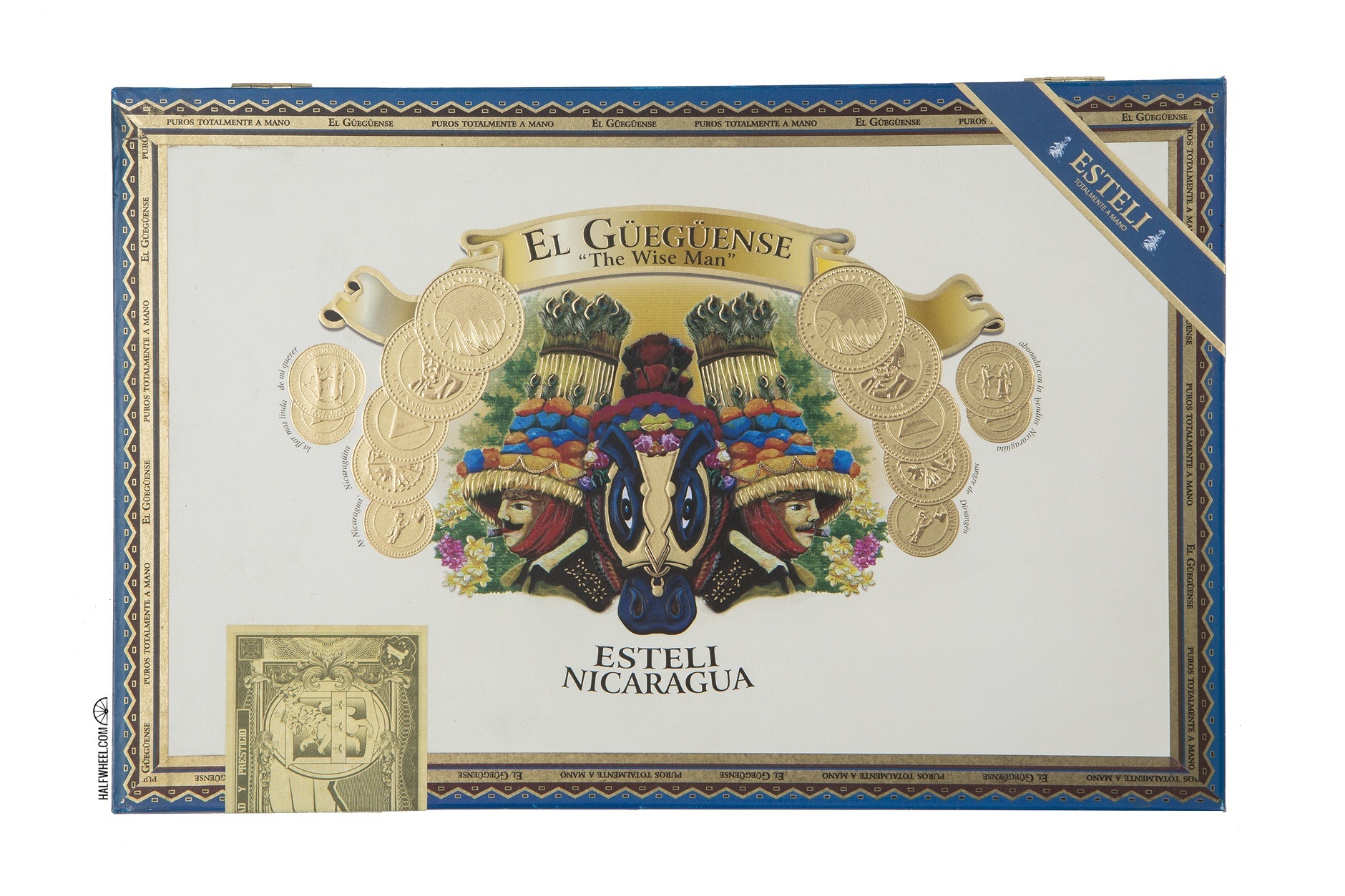 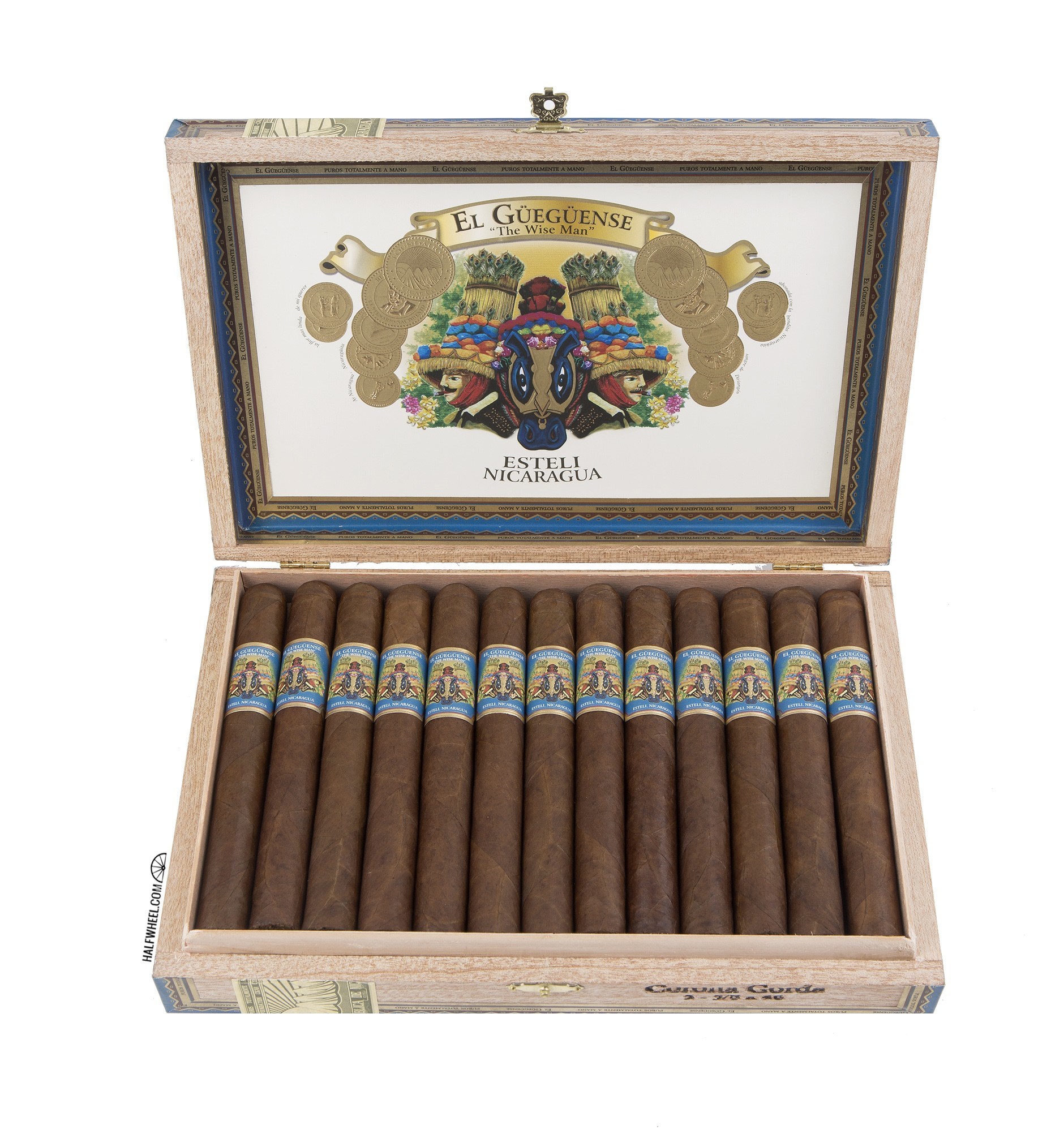 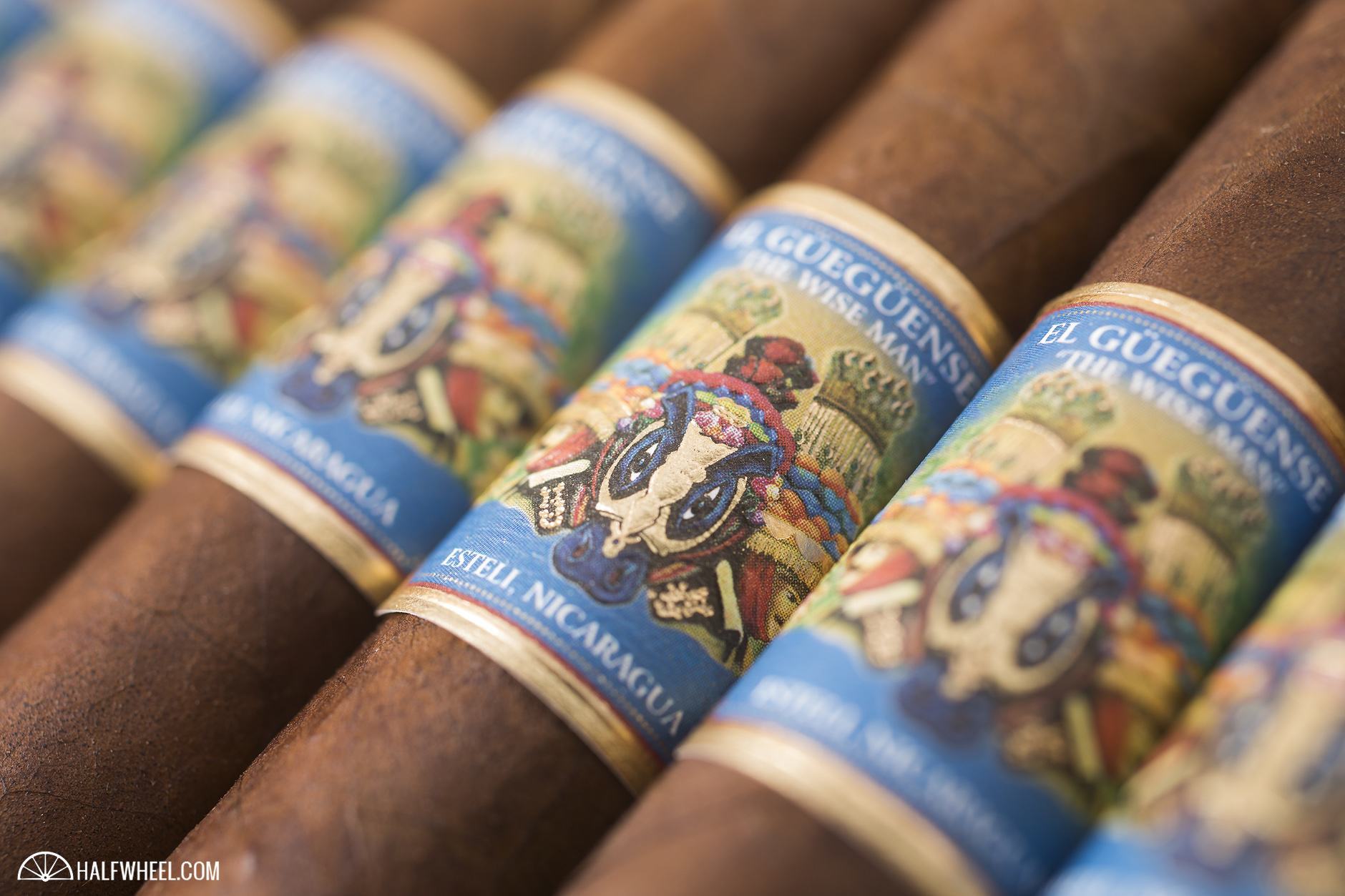 In a text with halfwheel, Melillo gave some insight on the wrapper that he chose for the blend:

As you might know to grow wrapper in Nicaragua is not an easy tasks and it is not conducive for high yielding wrapper crops.  The wrapper is grown under shade and I am using Viso and upper priming Viso for the blend.  Due to the climate and sun exposure — > leaf in Nica is heavy and for this reason not high yielding wrapper grades. Given that the wrapper is not the most perfect – razor sharp- burning tobacco like Ecuador Hab. (Ecuador has cloud diffusion which naturally shades making high yielding wrapper.)  I knew this going into the project and for me Nicaraguan wrapper has tremendous flavor and is worth being touched up, if need be, because the flavor is unlike any other wrappers.

El Güegüense was offered in five different vitolas at launch, all of which were offered in boxes of 25. 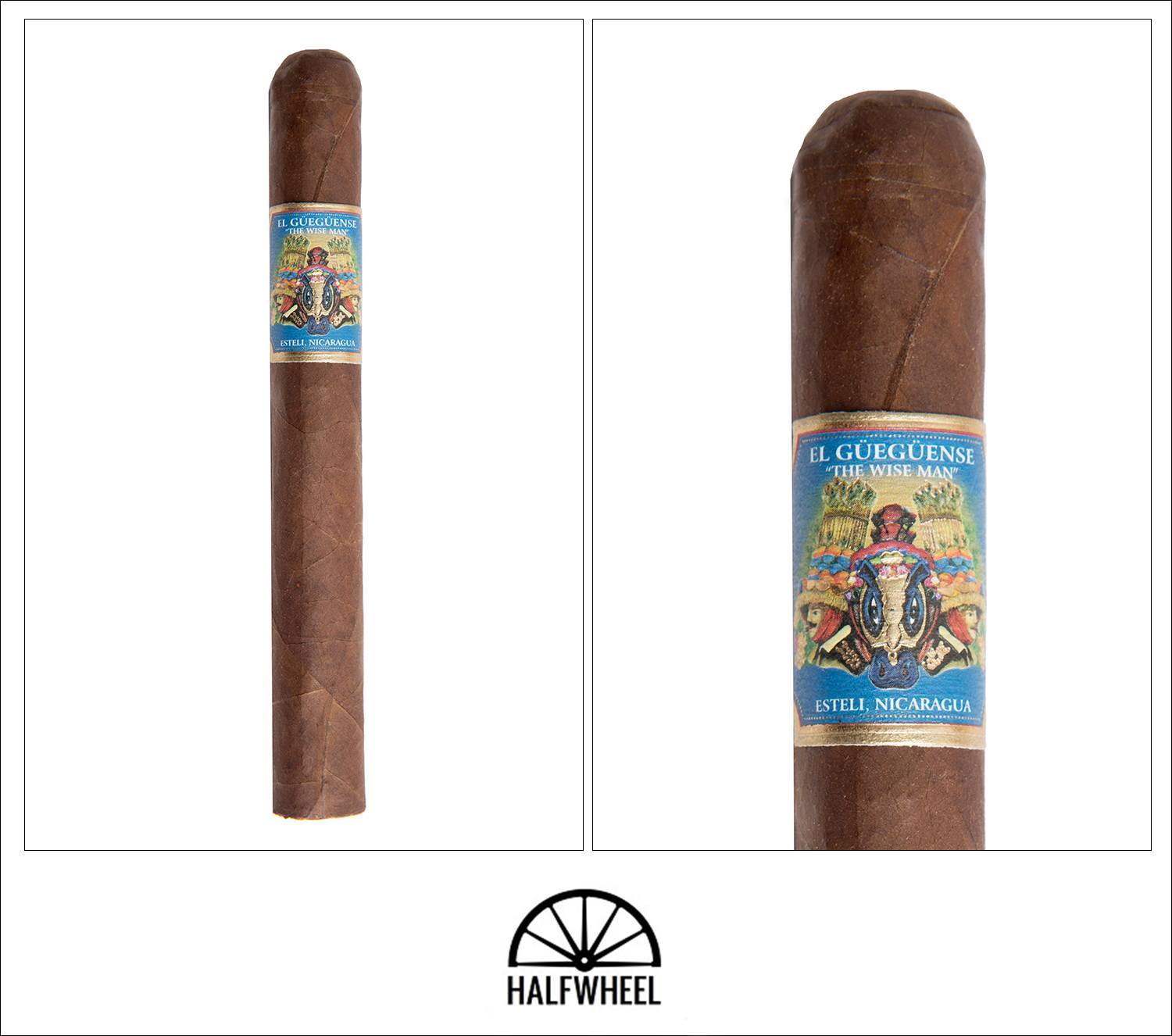 The El Güegüense Corona Gorda is nicely rolled, with a dark reddish-brown wrapper that is slimy smooth to the touch and slick with oil. There is very little give when it is squeezed and I notice a few bumps running up and down the length of the cigar. Aroma from the wrapper is a combination of strong espressos beans, cinnamon, almonds, leather and a touch of floral, while the cold draw brings flavors of dark chocolate, earth, cedar, anise and sweet cream along with some slight spice on my tounge.

It starts off with some aggressive oak and leather flavors on the palate, along with some very obvious black pepper on the retroahale. There is some sweetness on the retrohale as well, and while it is not very strong, it reminds me of burnt sugar, almost like what is found on top of creme brûlée. I also pick up some very interesting barbecue spiciness on the finish, as well as other notes of earth, pistachios, dark chocolate, bourbon and hay. Construction-wise, the draw is excellent so far, and while I have to touch up the burn once, it is not even close to bad enough to concern me. The strength is surprisingly light, and fails to hit the medium mark by the end of the first third. 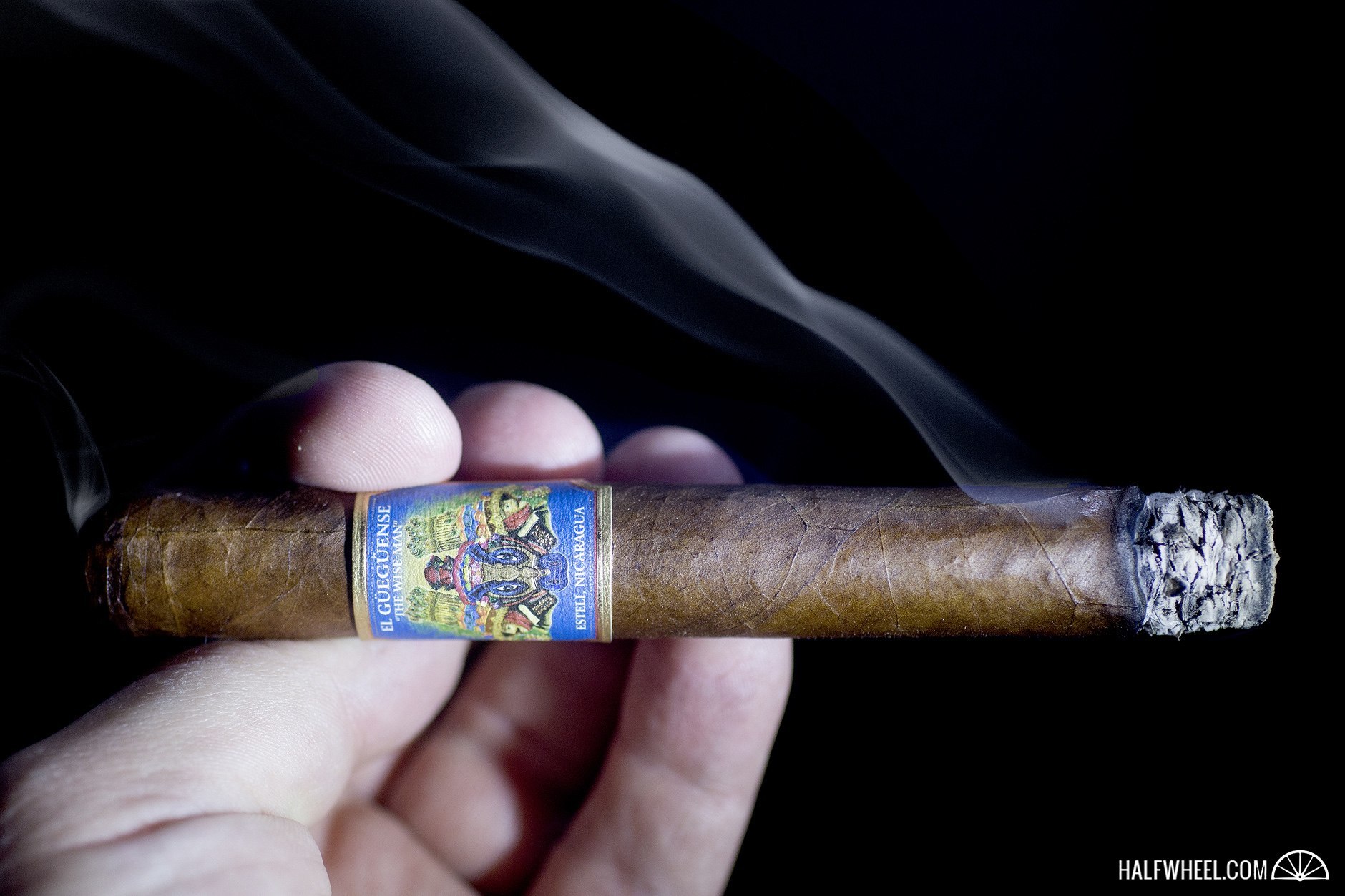 The barbecue spiciness begins a huge upswing in second third of the El Güegüense, easily becoming the dominant flavor, followed by notes of mesquite, bitter espresso, roasted nuts, gritty earth, leather and powdery cocoa. The sweetness is still present on the retrohale, but it now reminds me of a floral sweetness, and it is still not strong enough to really affect the profile. The draw remains excellent, and while the burn is far from razor-sharp, it is not giving me any major issues. The smoke production has increased dramatically, as has the strength, with the latter easily hitting the medium mark by the time the second third comes to close. 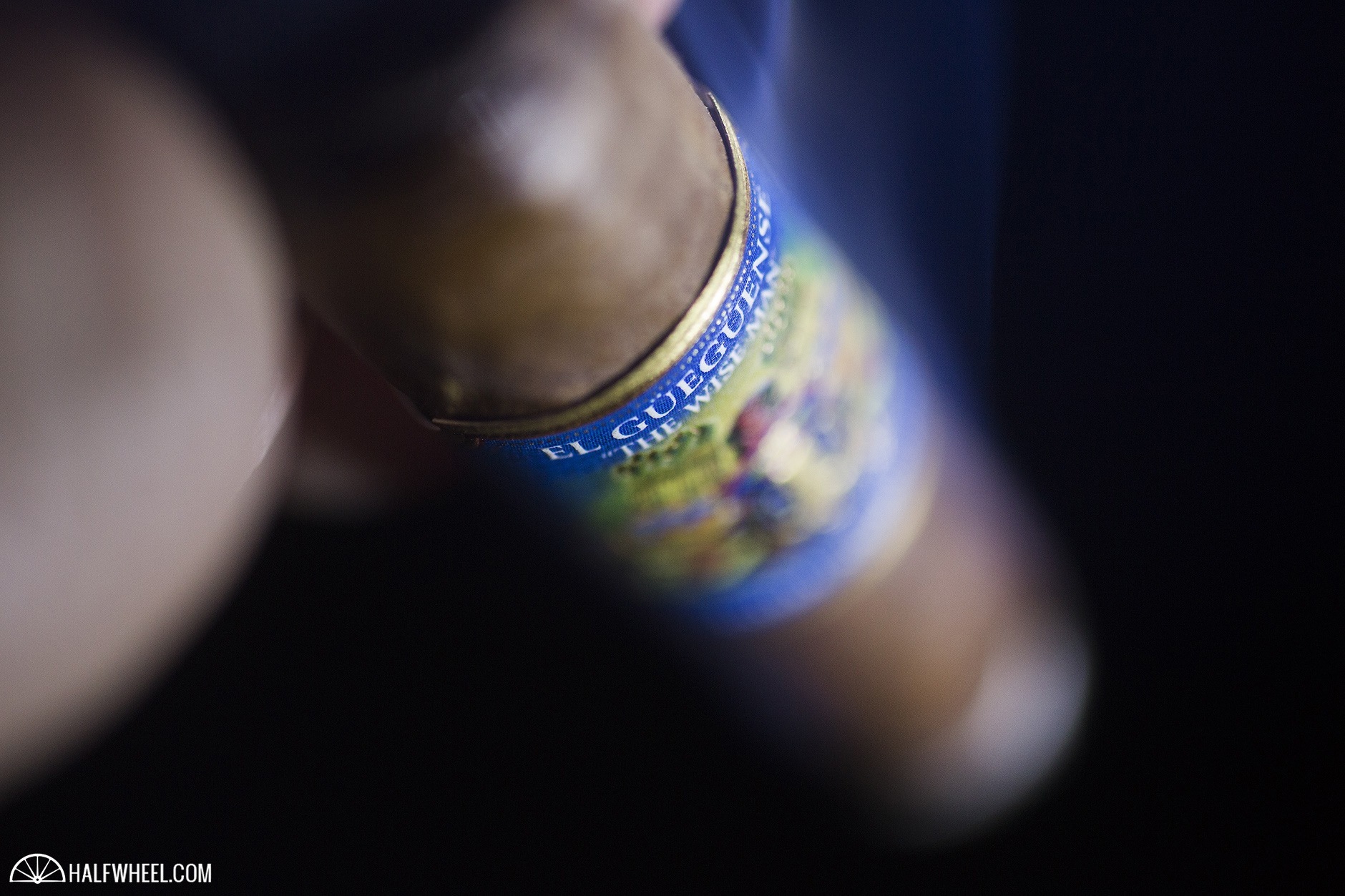 The final third of the El Güegüense features the same barbecue spiciness as the second third, but the mesquite note has increased in strength, as has the espresso bean note, leading to a combination of dominant flavors. Other notes of leather, gritty earth, dark chocolate, grass, yeast and slight dark fruit flit in and out, while the smoke production remains fairly consistent with the second third. The burn has evened up nicely and the burn continues to impress, while the overall strength does manage to get past the medium mark, it does not go much further, stalling out there by the time I put the nub down with less than an inch to go. 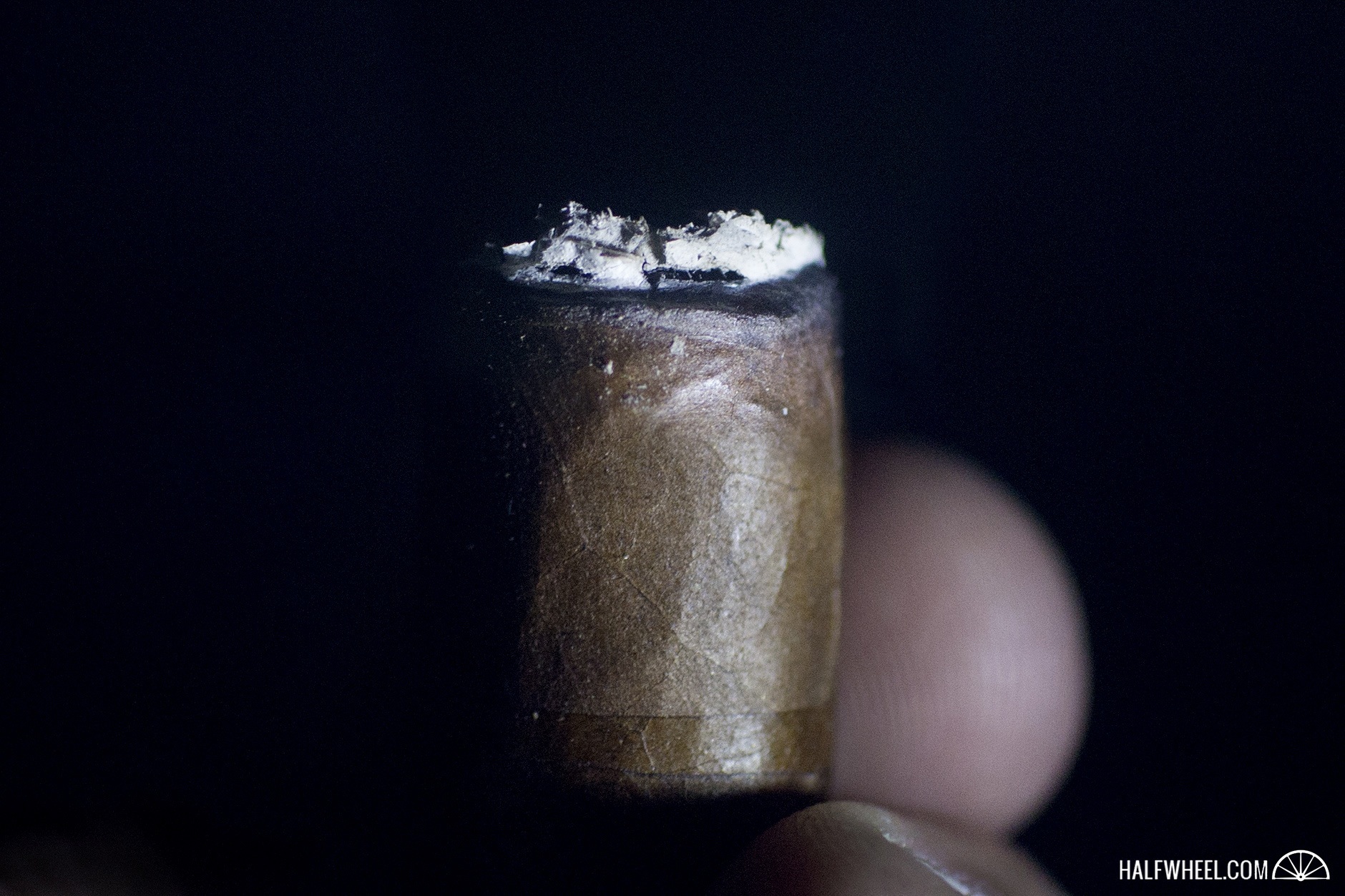 I have to say, I was surprised when news came out that the first blend Melillo was going to release did not include any Connecticut broadleaf at all, considering how well he is known for working with it. Well, it turns out that unsurprisingly, Melillo knew what he was doing. At least in the coronal gorda vitola, the El Güegüense is a flavor bomb, with a dominant mesquite barbecue note that is not only present throughout the profile, but also balanced quite nicely with the rest of the flavors. Yes, I think I little more sweetness—or even significantly more—would only help increase the complexity of the blend, but as it stands, the El Güegüense is a hell of a great debut for the Foundation Cigar Co. brand.