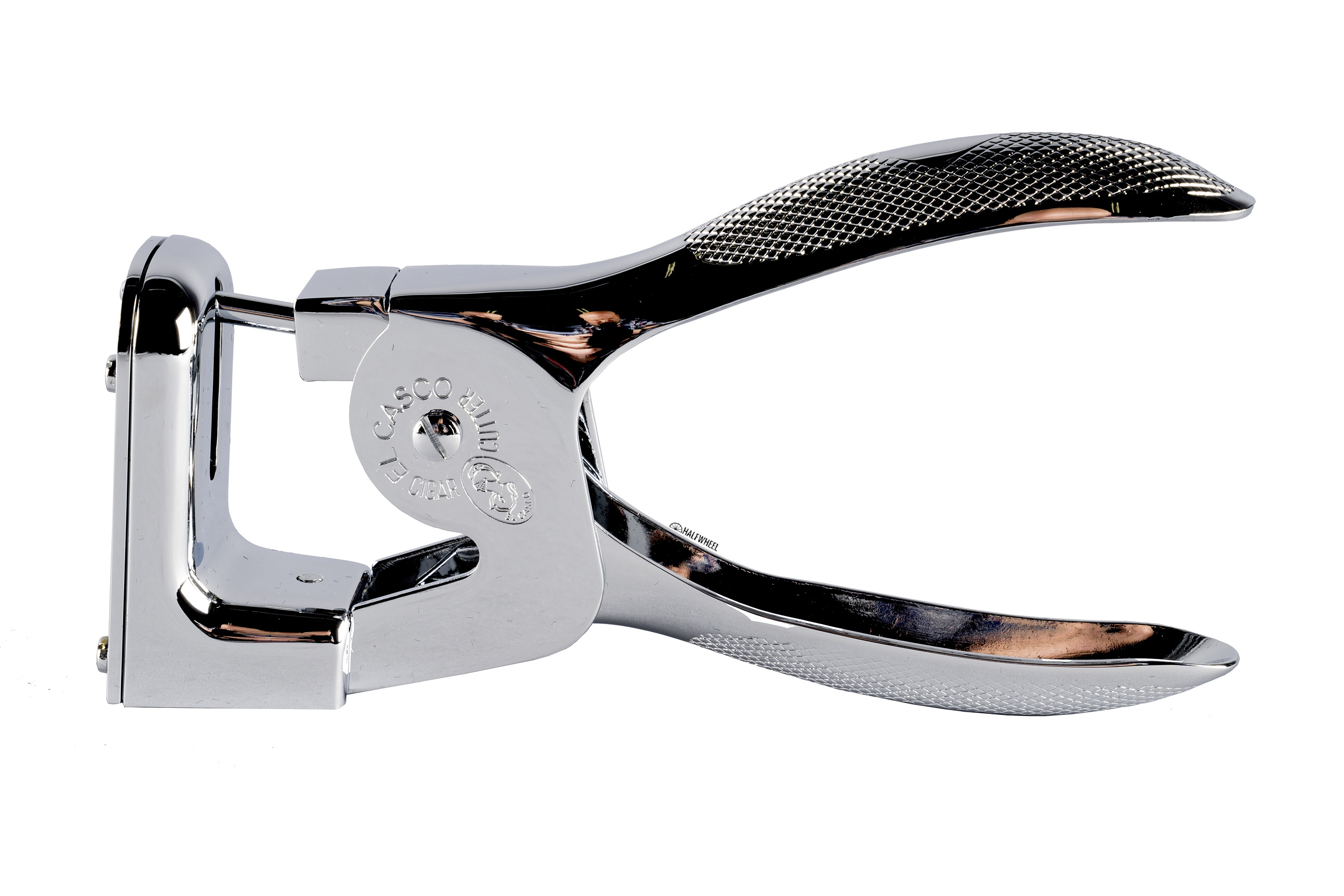 When it was originally founded in 1920, El Casco—a name that translates to the helmet from Spanish—was a producer of revolvers that were exported across the globe. However, during the Great Depression, the Spain-based company decided to diversify into other products starting with its M-5 stapler in 1935. In the years since, El Casco has become known as a maker of a number of other higher-end desktop accessories made with components that are individually numbered and assembled by hand, including paper punches, pencil sharpeners, lamps and various clocks.

One of the more unusual products that the company makes is its Cigar Cutter, which is extremely similar in design to the company’s M-85 Plier Stapler. 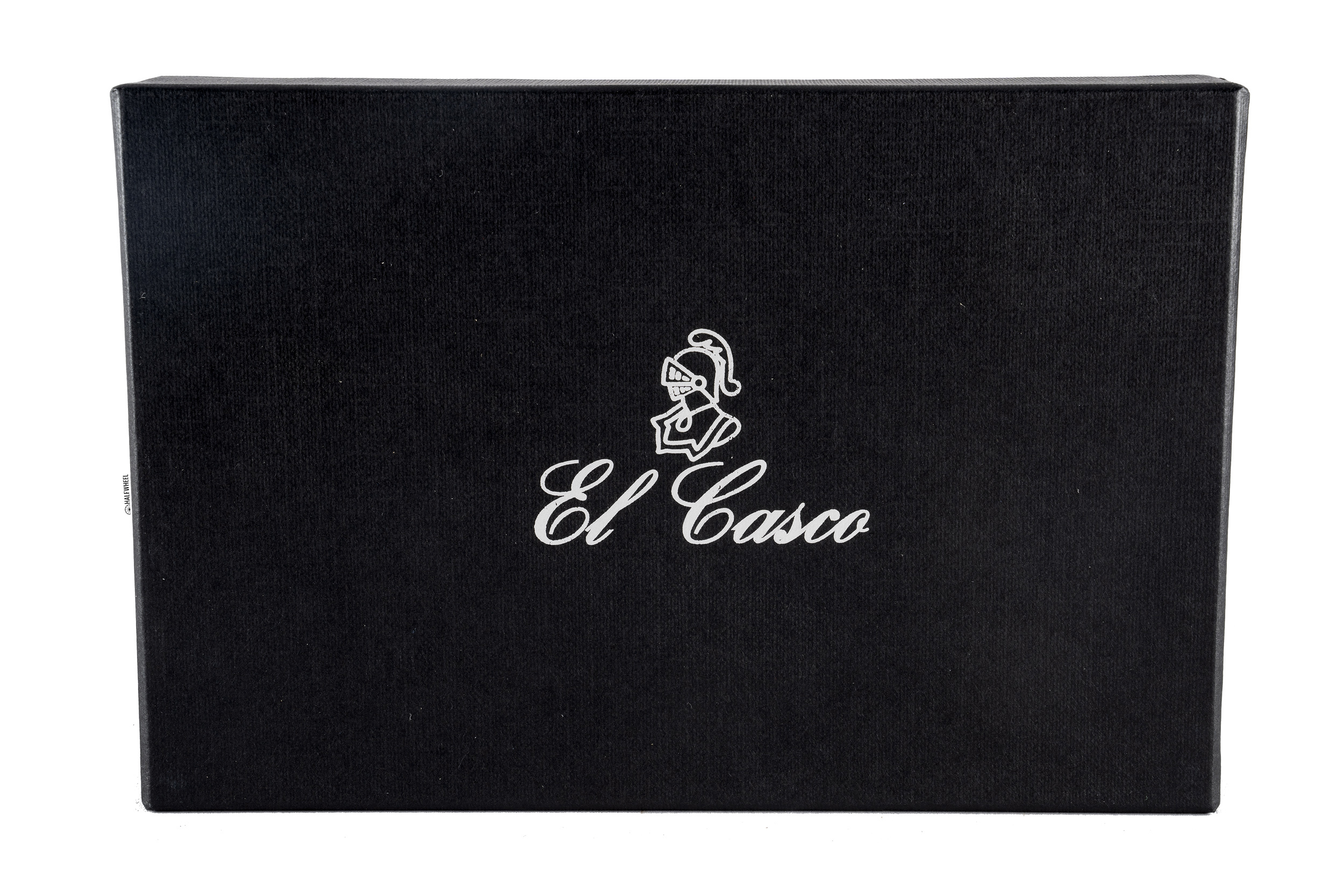 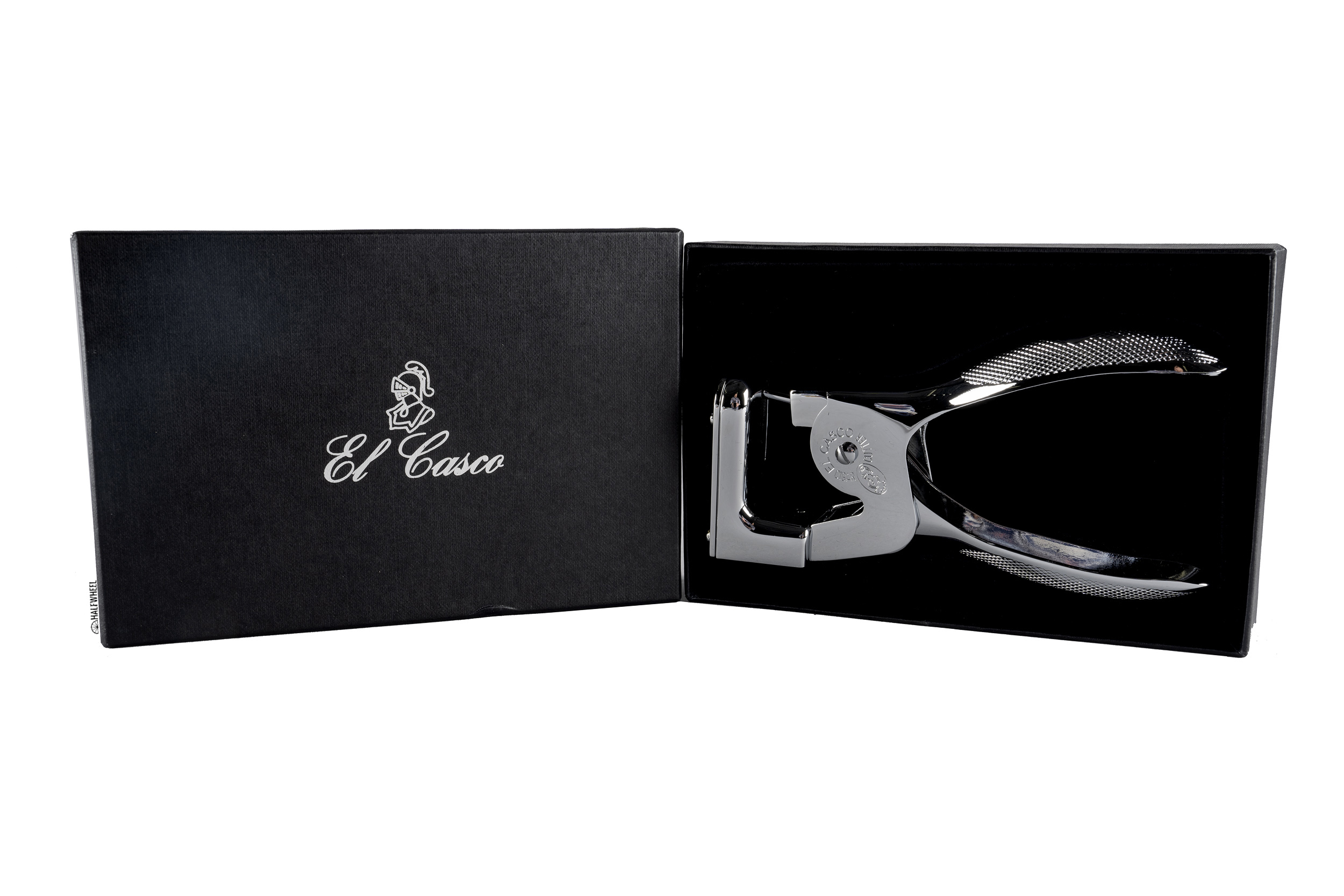 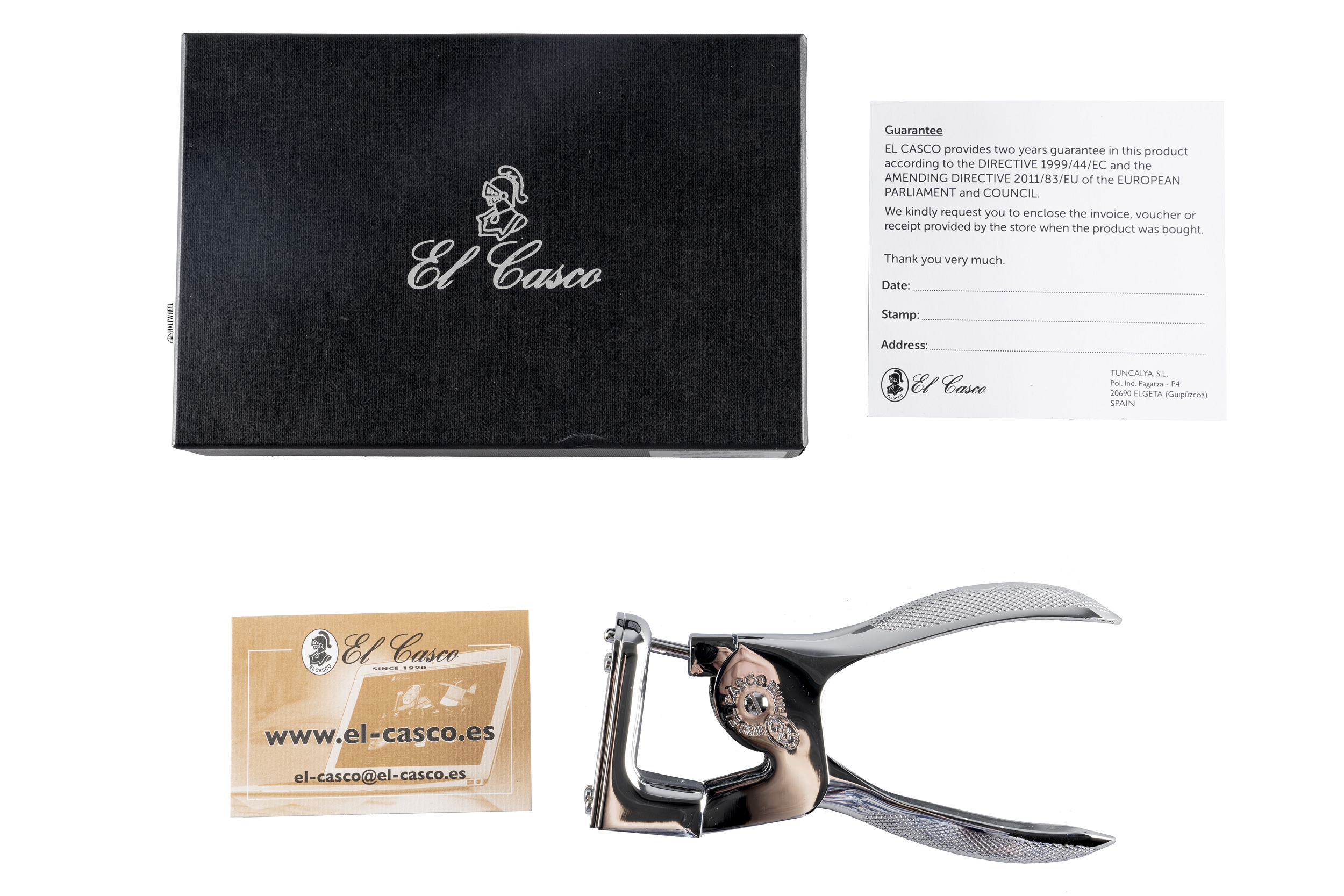 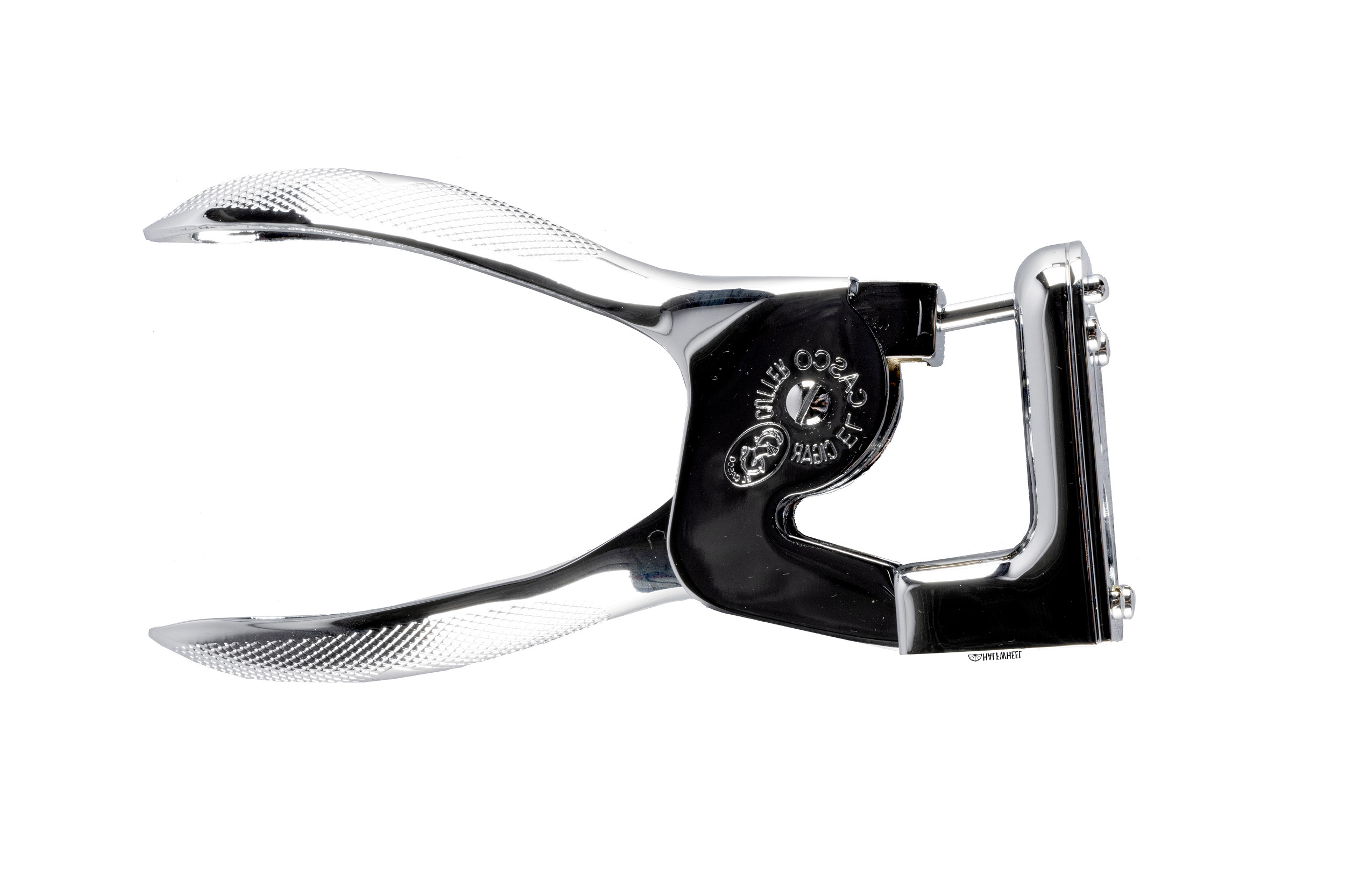 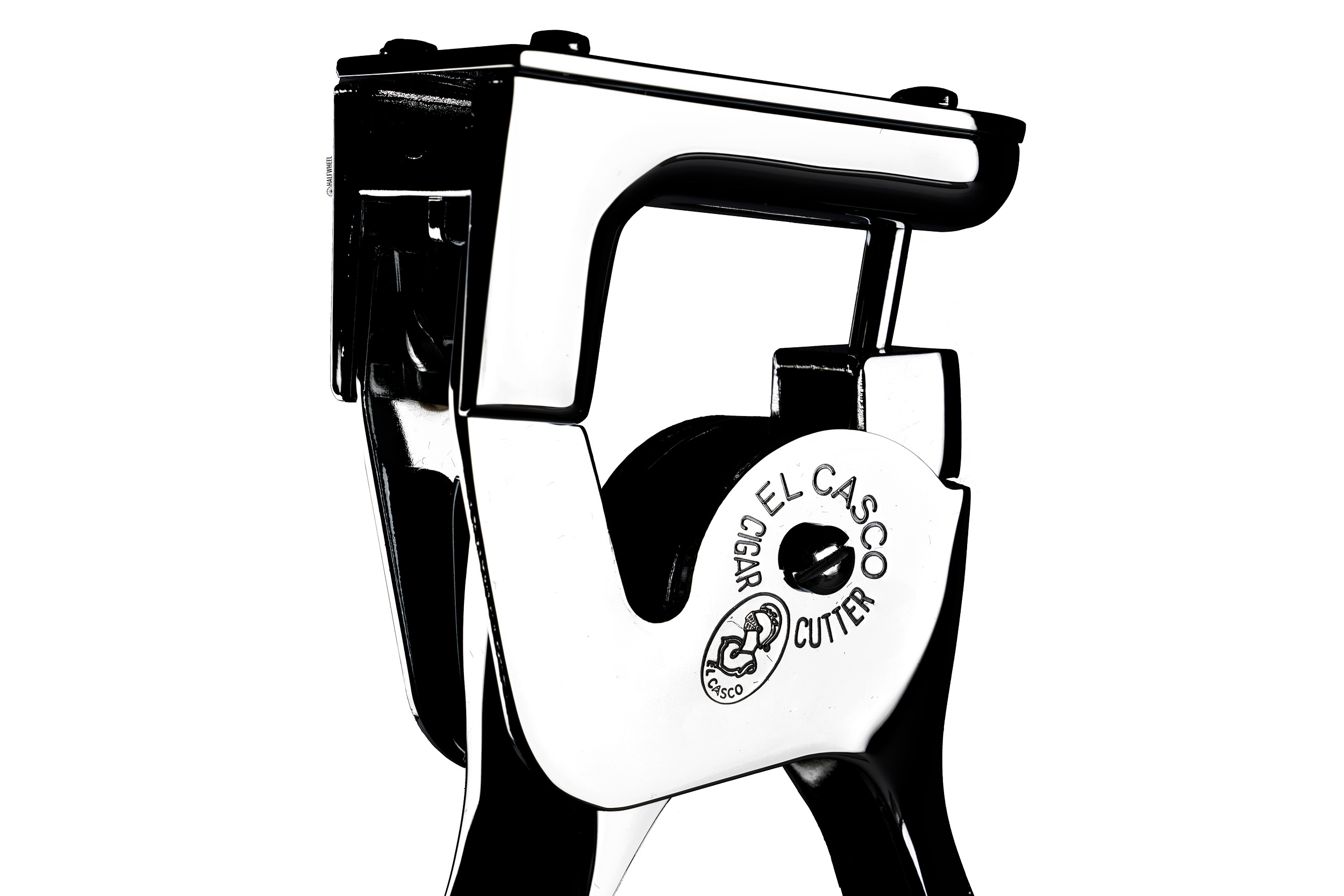 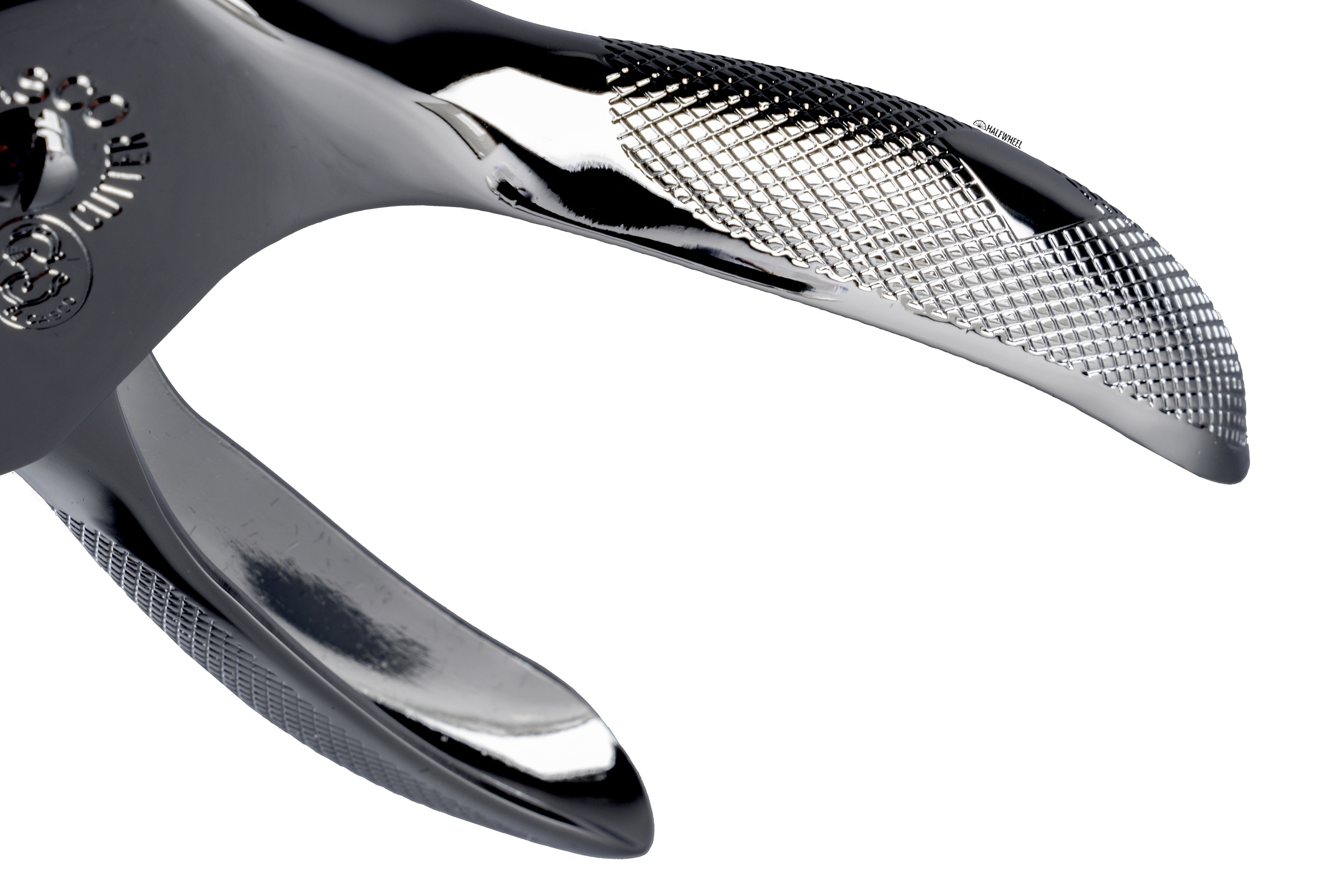 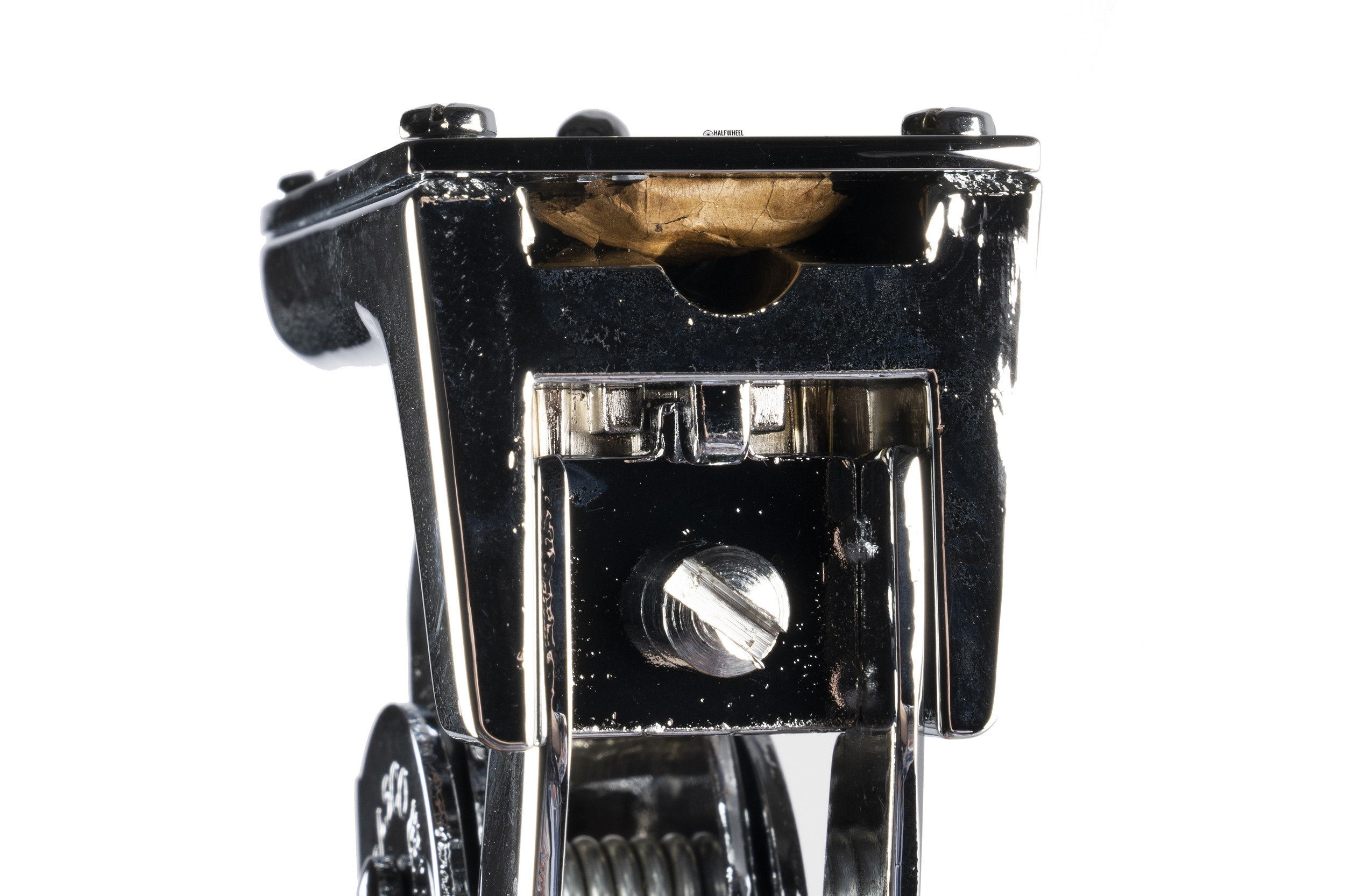 Large, heavy and very, very shiny, the El Casco Cigar Cutter is a single guillotine cutter that looks very much like a single hole punch.

The blade is described as Solingen stainless steel, which basically means the metal came from the city of Solingen, the German city best known for its knifemakers. The cutter measures 6.1 inches long and 3.2 inches wide, with a total height of 1.3 inches. According to the company, each of the different models can cut cigars up to 50 ring gauge, although I was able to cut enough of the cap off of cigars up to 56 ring gauge to smoke with no issues.

There are currently four different versions of the El Casco Cigar Cutter, all of which feature the same design but using different metal platings and finishes:

As mentioned above, the El Casco Cigar Cutter features a design that looks like a single hole punch, so if you have ever used one of those, this cutter should be familiar. Like many cutters, you insert the cap of the cigar you are cutting into the small round opening located on the top of the device. While the section behind the opening is slanted downward—i.e. not flat—in order for the cap to have somewhere to fall, the cigar will sit straight when it is placed in the hole.

To operate the cutter, it is then just a simple matter of squeezing the two handles closed—like a single hole punch—which pushes the very thin blade through the cap completely until it stops at the end of its journey. The cut cap then stays inside of the opening—but stuck between the back of the blade and the backplate—until you let go of the handles, which then retracts the blade to its original position and allows the cut cap to fall wherever you direct it to. The backplate does its job well, as it means that you won’t be able to take too much off the cigar in one cut that would deem a cigar unsmokeable.

However, as you squeeze the handles to force the blade through the cap of the cigar, many parts of the cutter move, most notably the cutting head, i.e. the part where you put the cap of the cigar, gets angled upwards. It is not an insignificant amount of shift, meaning that if you don’t compensate for it, you will end up with cuts that are clean, but also far from level, i.e. the angle of the cut won’t be parallel with the foot of the cigar. You can compensate and thus alleviate the issue by pushing in a bit harder on the cigar—but not so hard that you damage the cap—while just being aware of how much the blade is moving. It takes a little time and a few awkward cuts, but after that, it will most likely become second nature. 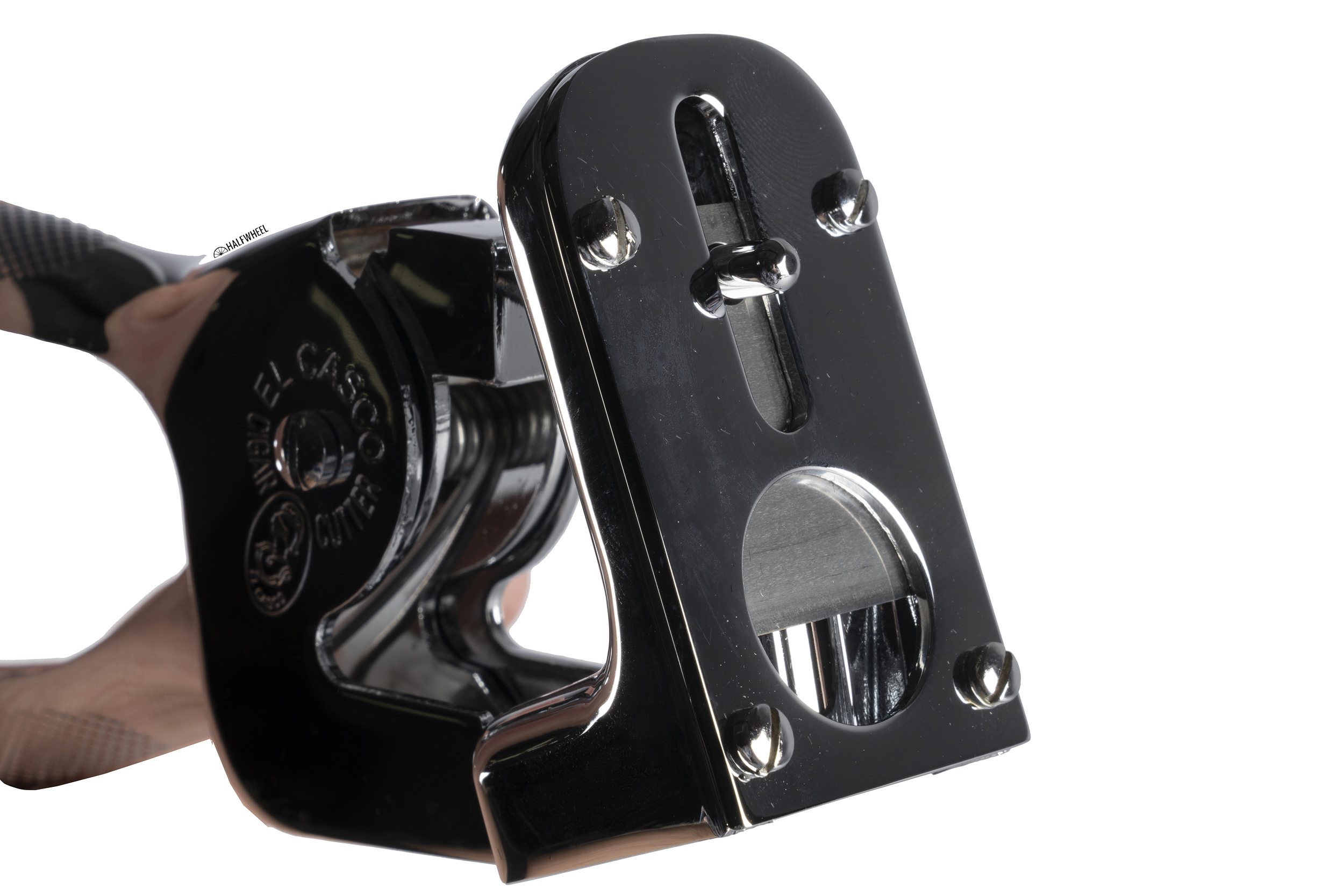 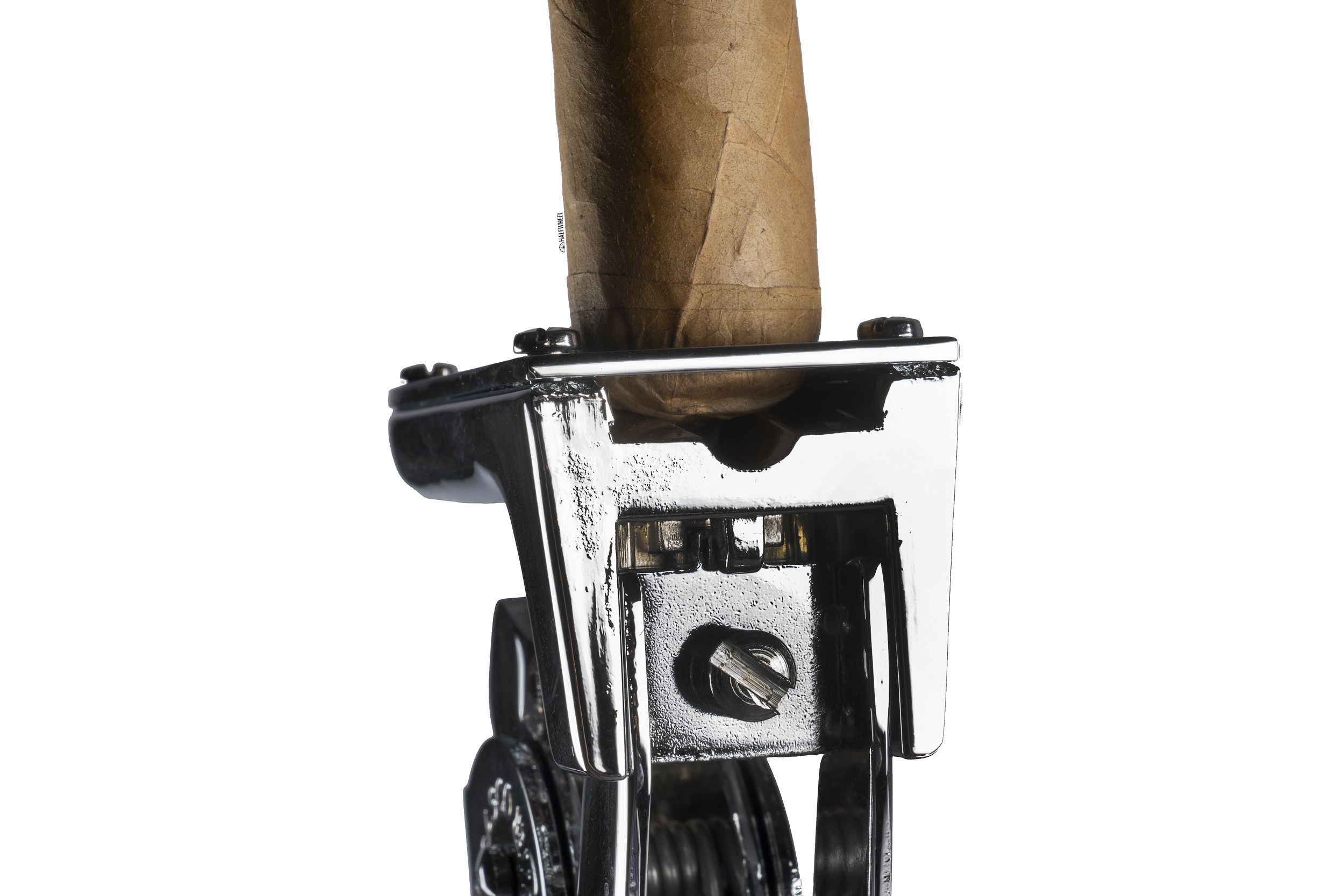 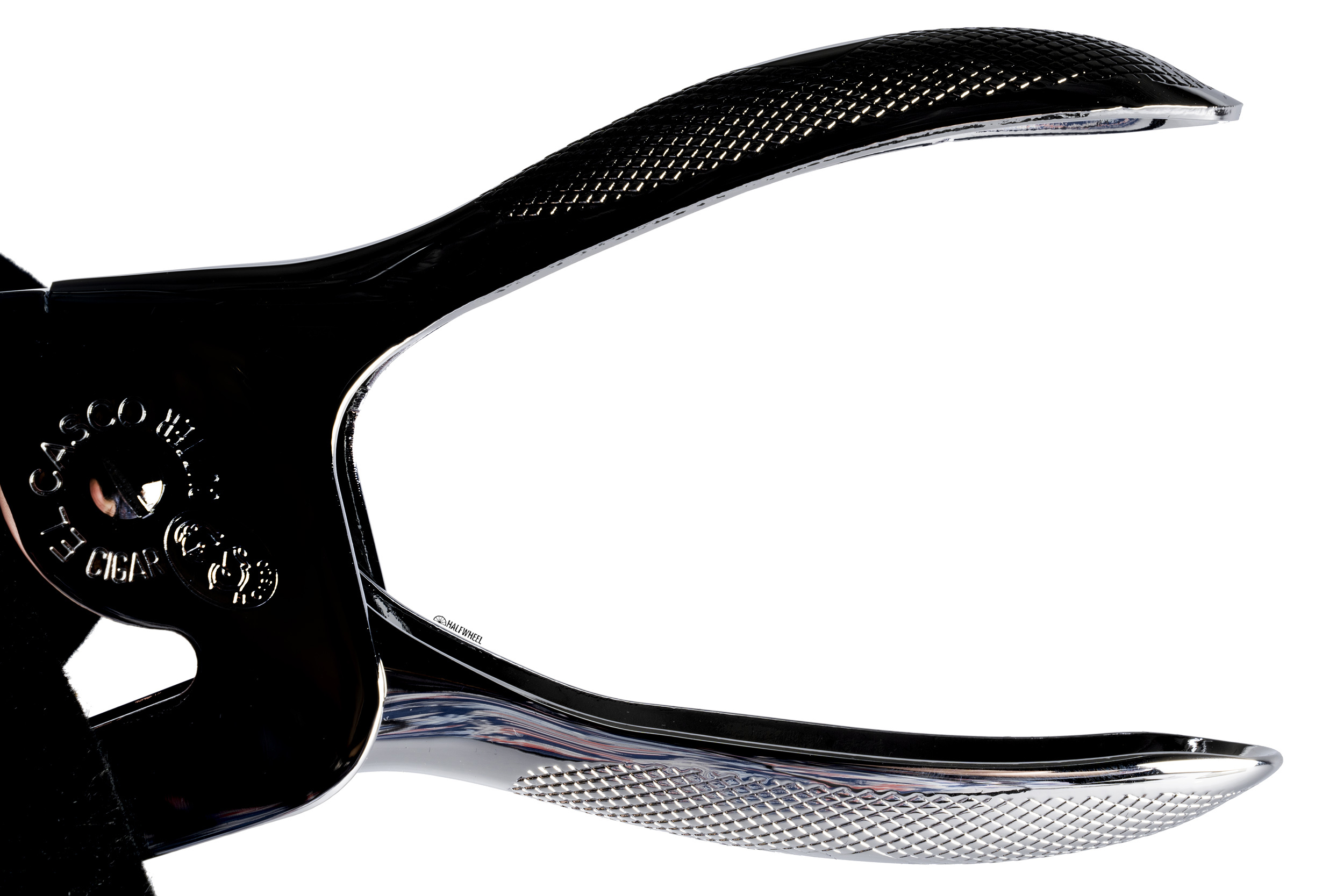 I can’t think of a cigar cutter that is close in design to the El Casco Cigar Cutter. But the Jetline Baron ($279.99) is an expensive and unique single guillotine cutter that isn’t portable. It features its blade attached to a plunger-like mechanism that you push down. While they don’t function the same, the real difference is that the Jetline tends to damage the caps of the cigars it is used on in various ways while the El Casco has no such issues. 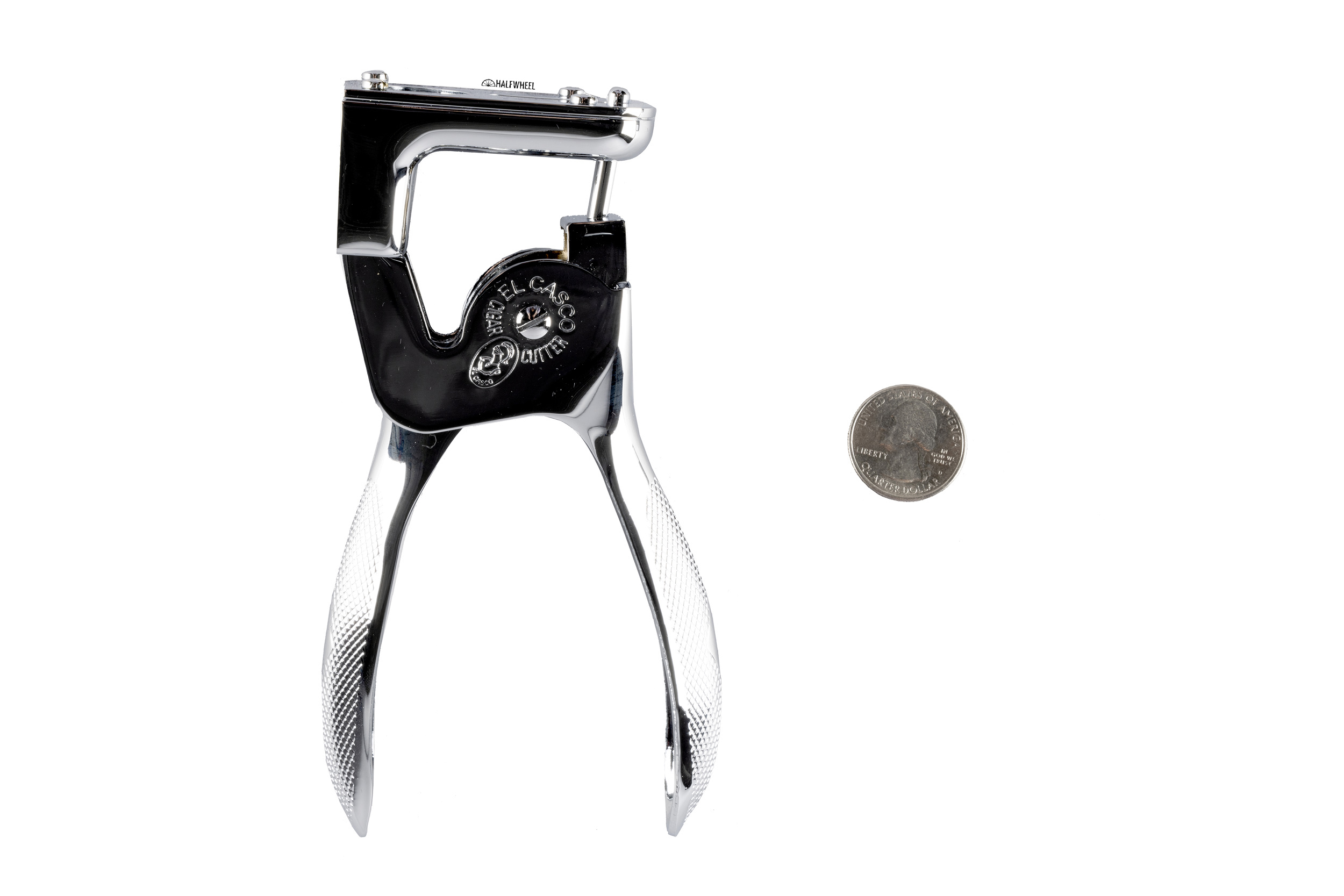 Yes, as long as you don’t expect to carry it around in your pocket.

This cigar cutter cuts caps so consistently well that I started to get bored using it after a little while. As long as the cap is inserted into the opening somewhat correctly, the odds of you getting anything other than a sharp and clean cut are astronomically low, although it is a bit harder to get a cut that is level. Sure, there are a small number of issues—you are not going to be carrying this around in your pocket unless you are a glutton for punishment, you have to work a bit harder to compensate for the blade moving as you squeeze the handles and large ring gauge cigar smokers are pretty much out of luck—but in the end, the El Casco Cigar Cutter is not only one of the most unique cutters I have reviewed, but also performs very, very well.