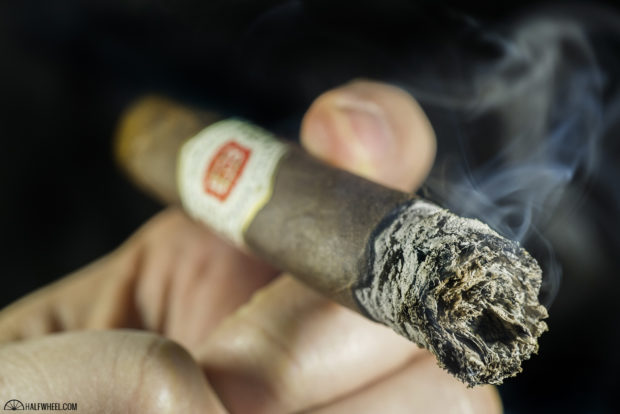 Before we get to El Borracho, we must get to Dapper Cigar Co., the company behind the line. Patrick Lagreid already covered the company, so here’s that background:

Say the word Fresno, and cigars are likely not the first thing that come to mind. In fact, they don’t come to mind at all. Yet, that’s where Dapper Cigar Co. is located, an “artisanal” cigar company that has been in operation since 2013 and has built up an impressively sized portfolio of cigars coming from a handful of well-known factories.

Like a number of brand owners, Ian Reith entered the cigar industry from the consumer side, at first wanting to make a single cigar. He comes from the tech world, working as a network communications engineer for a large group of hospitals in California’s central valley, as well as starting a small software company that writes custom software for the education sector.

In building his line, he said he wanted to avoid the gimmicks that he felt were too prevalent in the cigar industry and instead focus on making brands and cigars that were simultaneously nostalgic and fresh. To do so, he enlisted the help of Dan Gretta on the aesthetics side, while a neighbor of his, Chris Alvarez, prompted the company’s name. A barber by trade with a focus on old-school cuts, he looked at one of Reith’s first creations and remarked, “now that’s a dapper cigar.” El Borracho is the second release from the company, a Mexican San Andrés wrapper over a Nicaraguan binder and Nicaraguan fillers. It’s offered in three sizes:

And yes, El Borracho translates into the drunk. It’s a square press, perhaps somewhat artificially accentuated by the cellophane, which has creases. Nonetheless, the El Borracho Edmundo looks fairly Cuban once out of the cellophane, which I imagine means the aim of the band was achieved. Aroma off the Mexican San Andrés wrapper is full with chocolate, leather and some blackberries. The foot also has a strong aroma, this time more chocolate forward in front of creaminess and oranges. I pick up some foul apple cider notes, oranges, creaminess and a slight bitterness off the cold draw, right at medium-full.

The El Borracho starts a bit south of that medium-full level with apples, creaminess, dry earth and graham cracker each fighting for the main stage of the flavor profile. It develops with the apples taking the lead ahead of some pineapples, creaminess and earthiness. The retrohales are much stronger, delivering nuttiness, breading that reminds me of burnt fried chicken, and some earthiness. While there’s no pepper the retrohales are very full and sharp, so much so that it’s challenging to take a full retrohale, particularly on consecutive puffs. The finish has a touch of lemon behind some burning earth, which serves as a decent contrasting flavor. Intensity-wise, the flavor is full, body is medium and strength is medium. I find myself pushing the El Borracho in terms of smoking rate as the second third gets underway. It’s needed because the smoke production is inconsistent, but it results in a sharper profile, at times with metallic flavors. Fortunately, that’s not present on every puff and I’m able to have an enjoyable mixture of creaminess, earthiness, some white pepper and lemon. The finish is similar, albeit not identical, with a grapefruit sweetness and earthiness. The flavor remains full, body picks up slightly to medium-plus and strength is medium. Eventually, I find myself surrendering to the reality that the cigar needs to get touched-up and I put the lighter back to work. The flavor profile of the El Borracho Edmundo is similar with a grapefruit sweetness and earthiness, though a distinct cinnamon stick flavor is added. Underneath that is some earthiness, creaminess, pita bread and dry leaves. In the last inch, a black pepper is added to the mixture and eventually, a rye whiskey flavor emerges. The finish has pepper, but it’s a distinctly different red pepper. Flavor finishes full, body is medium-full and strength is medium-plus. The El Borracho is a good cigar that delivered a full spectrum of flavors, but it needs some time in my opinion. At the moment, the cigar finishes, both the finish as in part of the flavor and the final third, a bit too harsh for my liking. The three samples I smoked were quite different: one was great, one had construction issues and one was somewhere in between. None were bad, but all could be improved in my opinion.