Smoking a cigar in the middle of January? That eight inch long one looks like a solid choice.

That was my thought when I saw this pop up on the schedule, but then I remembered that I live in Phoenix, where winter lasts about three days and it will touch 70 degrees in January. But I digress.

As we’ve covered numerous times before, the Tobacconists Association of America (TAA) is a group of approximately 80 prominent U.S. retailers that gets together for a meeting and trade show every spring, and at said meeting and trade show, cigar manufacturers often bring some exclusive cigars for the retailers to sell. There are about 40 manufacturers who are also members of the TAA.

At the 2018 meeting, which celebrated the TAA’s 50th anniversary, one of those manufacturers was CLE Cigar Co., which in 2015 celebrated the 20 years that company founder Christian Eiroa had spent in the cigar industry. That first celebratory cigar was a Honduran puro that came in three regular production sizes. However, there was one word that seemed to get a bit overlooked on the tissue paper that covered the cigar: series.

In 2017, the line got its first extension, The First 20 Years Colorado, which used a Honduran corojo wrapper aged for five years over a Honduran binder and filler. That cigar came in four sizes, again a regular production addition.

As noted above, Eiroa announced that he was creating a new cigar for the TAA, and not only would it feature a new blend, it would be sizable addition to the series, a diadema measuring eight inches long, 60 ring gauge at its fattest point and 48 at its most slender.

The blend remains a Honduran puro, though the wrapper comes from a Mexican seed that was grown at he Eiroa family’s Finca Corojo. The binder and the filler come from a unique seed called Victoria and that gets its name from the La Victoria farm that traces back to Generoso Eiroa, Christian’s grandfather. 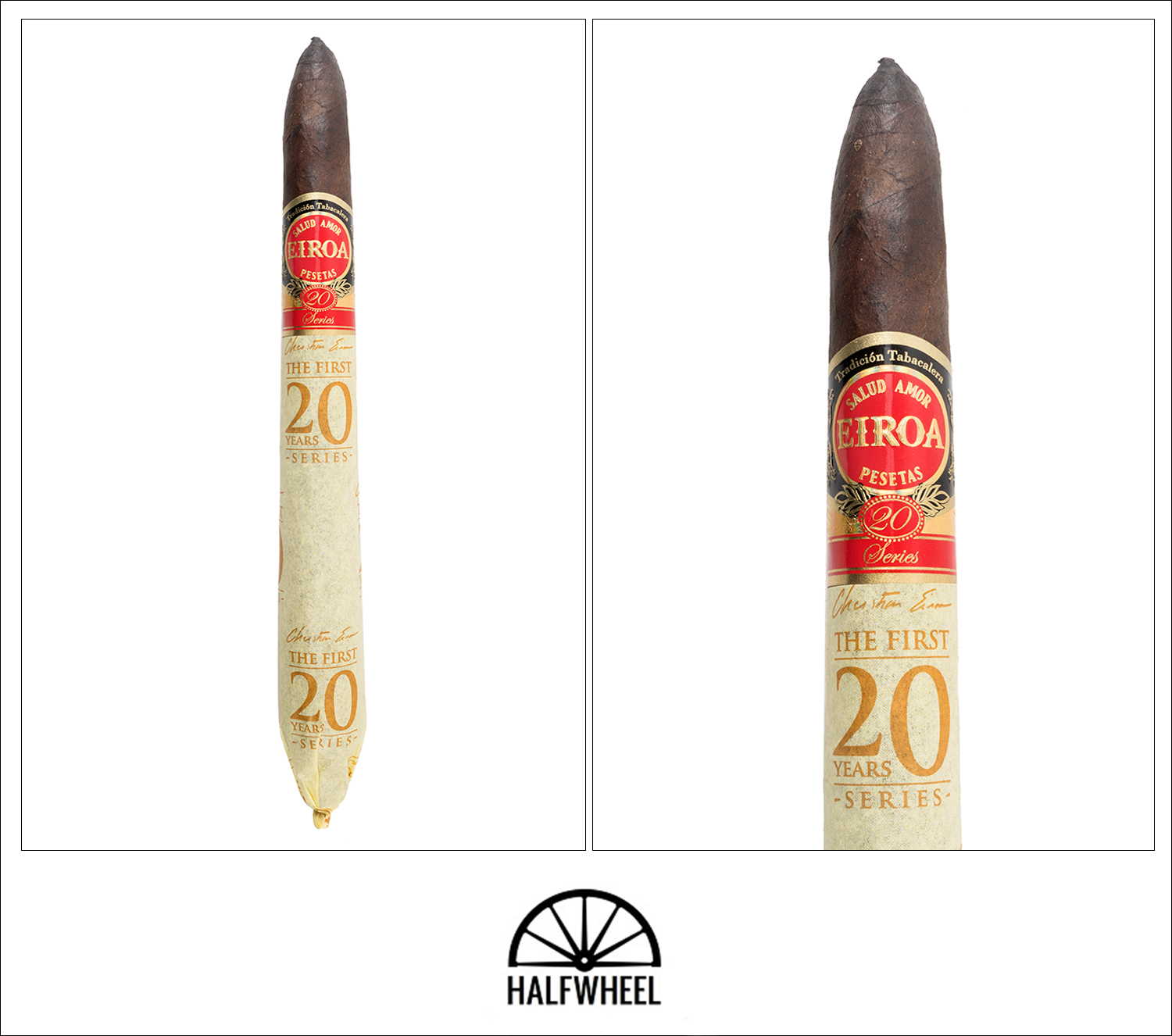 The Eiroa The First 20 Years Diadema offer lots to things that catch the eye, beyond just its distinct shape. Two-thirds of the cigar is covered in a tissue paper with a smooth feel on the fingers and that is printed with the logo of the Eiroa The First 20 Years Series. Above that is a glossy red and gold band with some black trim, and in the right light, it definitely shines. Once the tissue paper is removed—which requires tearing it somehow as it doesn’t slide off—the cigar looks even bigger. The paper covers up just how big the bulbed foot of the cigar is, as well as the nipple foot. Beyond that, it now shows more of the dark, earthy brown wrapper, which seems to command a ton of visual attention. The leaf is incredibly even in color with just a few small veins and a fine grit texture for the fingers. The wrapper offers an aroma of chocolate and coffee, though as a combination much like what I’d expect to smell from a stout that featured those two flavors as opposed to the source materials themselves. Unfortunately, the small opening of the foot isn’t much help to develop that aroma. Once a bit of the head is clipped, a cold draw reveals a somewhat surprisingly open draw, with flavors that aren’t as rich and thick as the aroma, but instead, I get more of a citrus syrup sweetness in the first sample while subtle earth and chocolate are most noticeable in the second. The final third is an interesting combination of the first two cigars, a bit of chocolate-covered mandarin oranges finished off by a bit of earthiness.

I opt for a single flame torch lighter to just toast the foot of the nipple, largely in hopes of seeing how the burn line progresses but also because I don’t want to over toast the end of the cigar. Even with just that small bit of tobacco, the cigar puts off a ton of smoke, and increases once the burn line hits the bulb of the foot. The flavor profile is lighter than I would have expected with a bit of chalk and metallic earth notes the first to stand out in the first sample, while the second has a sweet sausage character. The burn line could use a touchup as it starts moving up the cigar, something I’m not surprised about and wait as long as possible to actually break out the lighter. As the burn line passes the one-inch mark the ash continues to build, the profile gets a little more well-rounded by way of developing creaminess, though not appreciably fuller or more peppery. After building up two nearly two inches in length, the ash drops and the draw gets a touch looser, with the first sample now open enough to be slightly concerning. Flavor-wise, there’s a chocolate chip cookie note starting to emerge from the smoke, with black pepper coming along quickly behind that to turn the profile a bit rougher and jagged on the tongue. For as quick as the flavor ramps up, it backs off nearly as quickly in advance of the second third, settling in at medium bodied with a somewhat thin smoke texture. 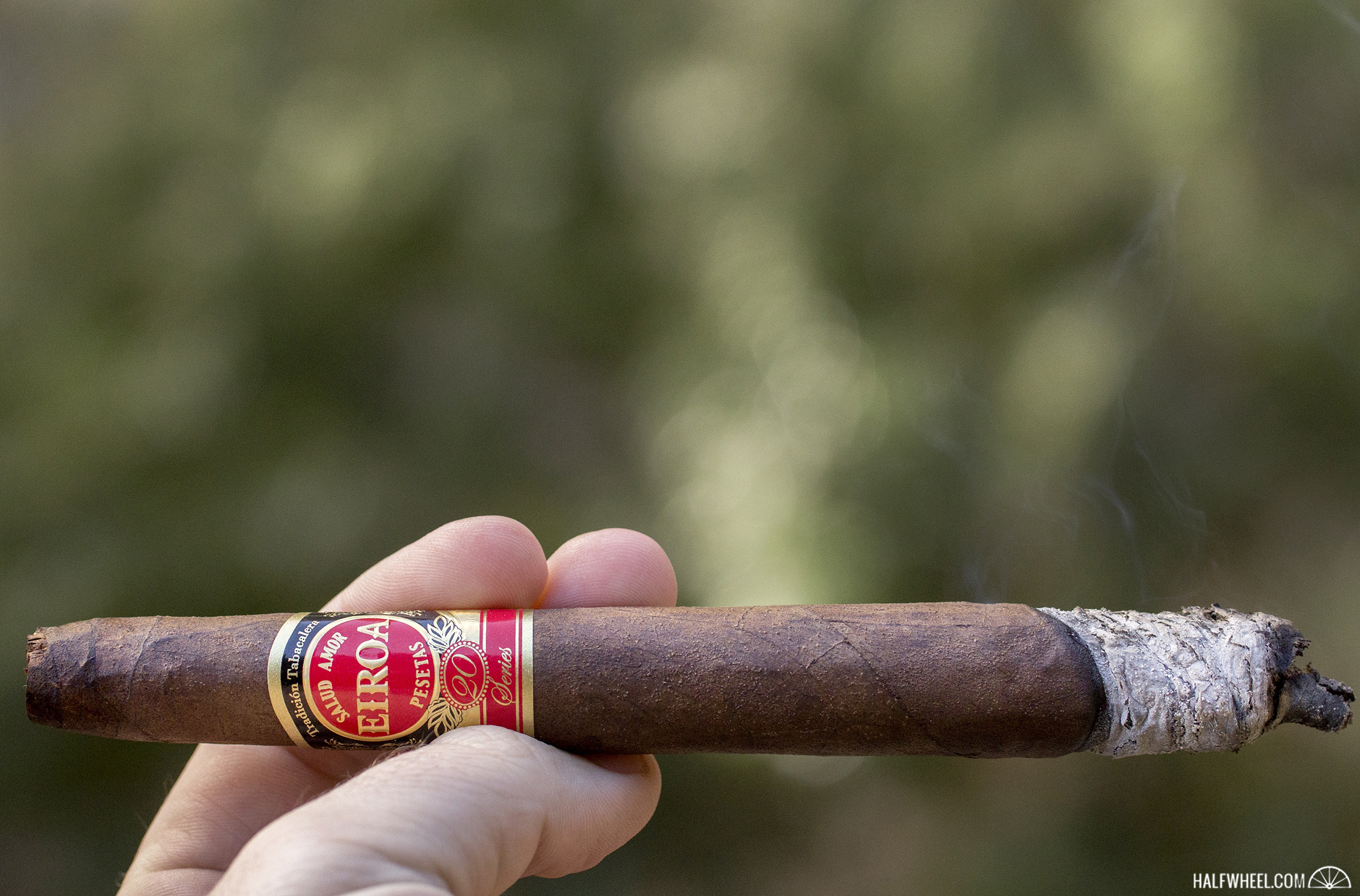 After dabbling in a somewhat untraditional flavor profile in the first third, the second third of the Eiroa The First 20 Years Diadema gets very familiar, picking up some dry earth and wood that gets accented by touches of black pepper. There’s also the occasional note of lightly roasted coffee, though it isn’t as consistent or rich as the other flavors. Knowing that this cigar uses a Mexican seed wrapper, I keep thinking that I will get a flavor profile that tastes like Mexican San Andrés tobacco, though I’m quick to remind myself that it wasn’t grown in Mexico. There are definitely some similarities in terms of the earth-forward notes, but even those are markedly different. As the burn line steadily moves up the cigar—and at a rate quicker than I had been expecting—the flavor takes on what I consider to be a very Honduran profile; moderately earthy, moderately peppery, a bit of dry wood on the finish, with the notes of terroir lingering after each puff. There is the occasional bit of bite on the tongue, but it’s light and fleeting, certainly not enough to cost the cigar any points. The burn remains fantastic, with two of the three samples slightly open on the draw an the third ideal or just a tick firm. The final third starts on a bit lighter note than the fuller notes of the second third, and before long it’s back to being a mellower profile, with a bit of creaminess beginning to emerge to sweeten and soften the profile just a touch. It never completely departs from its core, instead of backing down the RPMs of the bigger flavors to give the palate and nose a few minutes to put things on cruise control before firing it back up. Likewise, the cigar never redlines the flavor either, gently stepping on the accelerator to get it back up to medium-full strength and body. The cigar does a remarkably good job at brushing off ill effects from the heat, getting just a bit more pepper-forward and leaving a more lasting tingle on the mouth and tongue, but never getting harsh, which allows the cigar to be smoked down to a finger-burning nub. 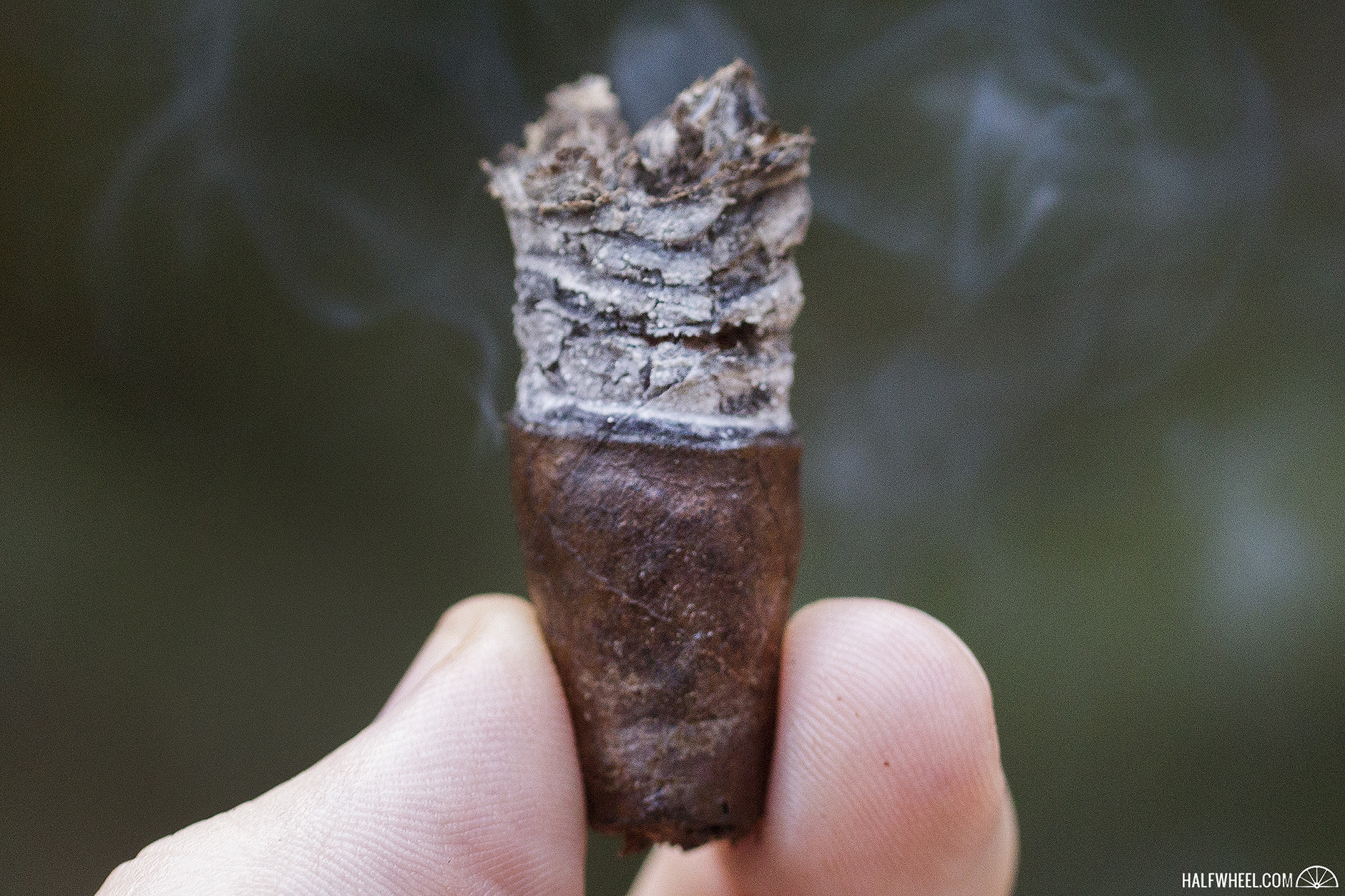 Yes, it's a big cigar, almost novelty big, but the tobacco used is anything but novelty. It's generally smooth and balanced, with the blend doing a much appreciated job of getting progressively stronger before backing off enough to rest the palate ahead of it ramping back up to a medium-plus strength and flavor level. Even a somewhat open draw couldn't affect the performance of the tobacco, other than to make it smoke a bit quicker than you might be expecting. If you don't mind the size—which isn't that big of an issue given that the cigar burns fairly quickly—you will be rewarded with a wonderfully balanced cigar that shows off some of the best of what Honduran tobacco has to offer.