As for the blend, it’s a new creation from E.P. Carrillo, distinctive enough that the wrapper is featured on the band: a criollo 98 leaf from Nicaragua’s Jalapa region. Under it is a Nicaraguan binder and filler from the Dominican Republic and Nicaragua. The cigar first started appearing at the 2015 ProCigar Festival in the Dominican Republic, though in fairly limited quantities. The official announcement wouldn’t come until early March, when the company called the flavor it produces “sharing a memory,” since Ernesto Perez-Carrillo, Jr. is said to have wanted to create a cigar similar to this with the Nicaraguan criollo 98 wrapper some years ago but couldn’t find it until fairly recently. A few things about the E.P. Carrillo Short Run 2015 Napoleon catch my eye: first is the band, the latest in what’s been a bit of an evolution for the brand and immediately calls to mind the band on the E.P. Carrillo 5 Year Anniversary but proudly proclaiming the wrapper of the cigar, while also combining what could be two bands into one larger band. The second thing is that Criollo 98 is featured so prominently on the band, as that just isn’t something you see all that often, which leads me to the third thing about the cigar that catches my eye: the dark, coffee bean brown criollo 98 wrapper.

It  doesn’t show much in the way of oils or tooth and has a dry feeling in the hand with a distinctive feel that isn’t really smooth or rough, but a texture that falls in the middle and will be familiar to those who have handled tobacco leaves, as a handful of prominent veins give the wrapper on the E.P. Carrillo Short Run 2015 both visual and physical texture. The roll quality generally looks good and the caps are fairly neatly applied, though not always perfectly even or smooth. The firmness of the cigar varies quite a bit; the first sample cigar is firm and shows just a touch of give, but nothing that raises an eyebrow, while the second I smoked is soft between the first and second thirds. The pre-light aroma on the first cigar has a near-perfect chocolate note coming from the foot, purer than milk chocolate but not as bitter as the higher grade offerings. It’s sweet without being overpowering and there’s no spice, pepper or competing notes to get in its way. Other samples don’t show that same clarity but are all bright and offer touches of leather and wet soil. The cold draw is just a bit firm and shows more complexity than what I got through the nose; there is still a bit of the chocolate in the background but I’m also getting subtle hints of wet leather, pepper and damp soil.

There is a certain gravitas to the flavor and aroma of the Short Run 2015 in the early going as nostril filling smoke full of barnyard and earth waft off the foot of the cigar as its toasted, but I’m also impressed at how bright it is, not getting weighed down by what could be presented as a heavy flavor. There are touches of pepper and earth in the first few puffs, a captivating but not overpowering beginning to the cigar. The burn line starts to venture off course in the first inch, nothing I’m overly concerned about but something that I will be monitoring. By the one inch mark the flavor has begun a significant shift, though its direction seems to be different from cigar to cigar. In the first sample I get an incredible note of peppermint, somewhere between a candy cane on the tongue and Altoid in the nose. In the second and third cigars it’s not there in nearly the same form and pepper grabs the reins, giving the cigar an even brighter punch of flavor and aroma. At points the heavier notes from the initial puffs completely go away, though they seem to return by the time the burn line is just past an inch in length. I could certainly go for a bit more open of a draw at points during the first third, but it’s not overly problematic, and with the ash holding on until almost the band, I’m willing to accept the cigar as it is. Again, the lead note of either pepper or peppermint that emerged at the end of the first third becomes the focal point of the Short Run 2015’s evolution, staying prevalent at the start of the second third before swapping roles with the heavier earth notes ahead of the midpoint, yet still staying part of the overall package. The draw is still a bit tight but the burn line has more or less corrected itself, and by the midpoint I’m really impressed by what the Short Run 2015 has been able to deliver, though it hasn’t quite been quite as attention grabbing as I might have been hoping for from E.P. Carrillo in terms of complexity. I will certainly give it the credit its due for balance, as for a blend that leans toward the full side of the spectrum, it’s certainly stayed fair to the palate. Past the midpoint, the peppermint is almost completely gone and my palate is left with a smooth if somewhat nondescript earthiness, along with varying amounts of pepper that leave a good tingle on the tongue. A few retrohales offer a pleasing tingle on the top of the nasal cavity that’s more about stimulation than submission. After two fairly strong thirds there is a bit of reprieve at the start of the final third, though it’s certainly not a complete bottoming out of the flavors. There’s a bit of a woody undertone that starts to emerge with touches of leather closer to the forefront, though the cigar never sheds its roots and begins to bring the pepper back as a more prominent part of the equation. There are points where there’s a bit of charred wood in the aroma, which helps keep the cigar on the stronger side of medium in terms of flavor and strength, yet I can’t say I feel much of a nicotine kick. The burn line continues to be sharp and even with no combustion or smoke production issues at all, with the smoke staying fairly cool and allowing me to smoke it down to a small nub without any harshness. 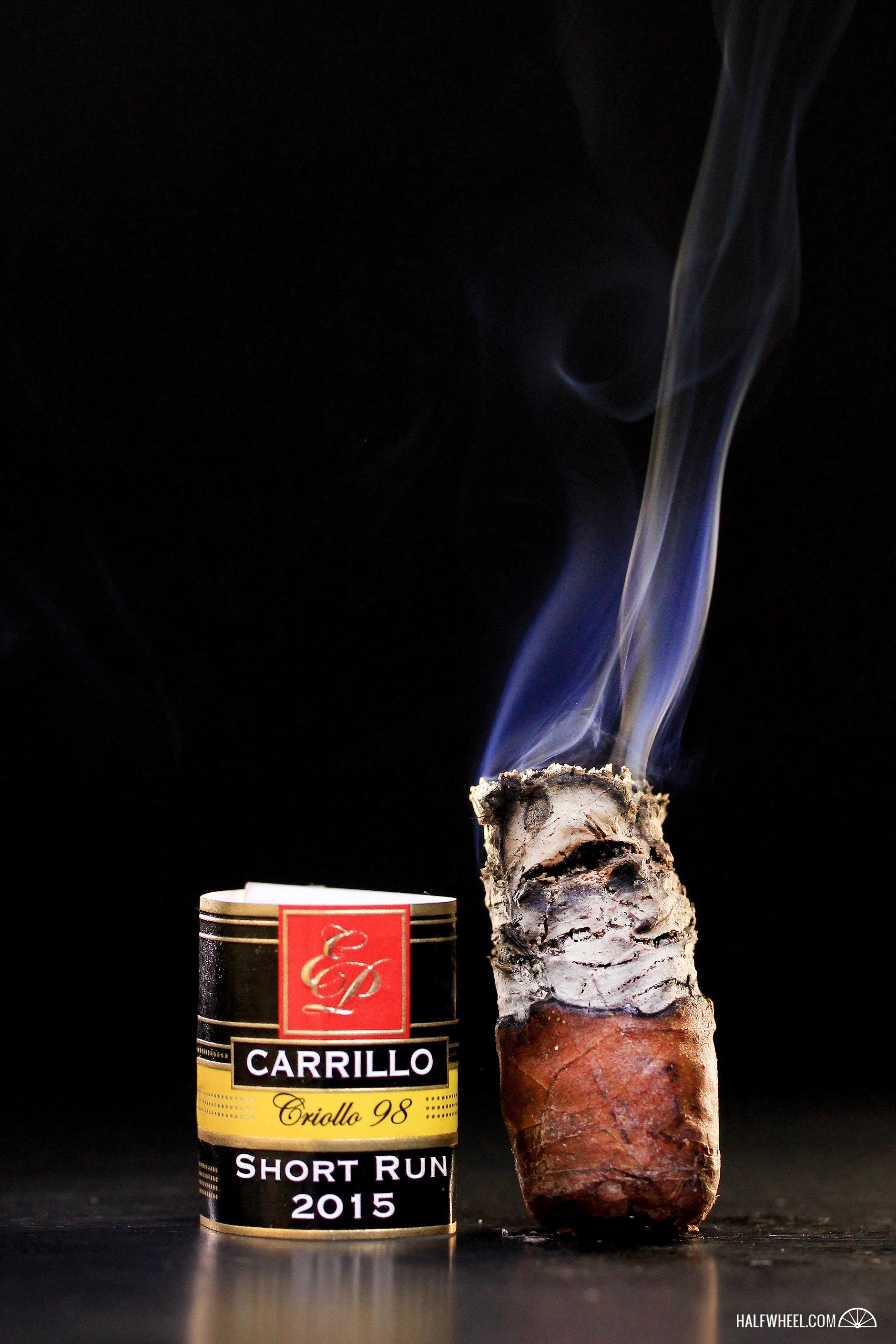 E.P. Carrillo's Short Run line has generally scored well on halfwheel, and 2015's release is no different. I'm still scratching my head over the peppermint note that I found to be so prominent in the first cigar, and my lasting impression from all three was that I would have loved a bit more complexity across the board, but I can certainly see what Ernesto Perez-Carrillo, Jr. found so appealing about this wrapper.