Earlier this year E.P. Carrillo made a teaser announcement for the 2016 Short Run series and a new size for the INCH line. While those two releases are usually exclusive of each other, they aren’t necessarily strangers, either. Back in 2014, E.P. Carrillo released a Short Run version of the INCH, taking the INCH’s filler blend, then tweaking the binder and wrapper to create the limited edition for 2014.

Looking for a cigar that has had quite a bit of time to rest for my redux, I found the INCH Short Run 2014 No. 62 sitting in the back of my humidor. Since my original review was done in March of 2014, it certainly has had time to rest, and with the original score hitting the middle of the pack, I’m looking forward to seeing if time has done it well.

Here is what I originally had to say:

The E.P. Carrillo INCH Short Run was a decent cigar. For the majority of the time the earth and wood dominating the profile was enjoyable, if not all that exciting. The rich spice note that ramped up early on was sorely missed in the last half of the cigar and the bitterness that showed up in the end was slightly disappointing. While the overall construction of the cigar was good, the minor burn issues did pose a slight annoyance. I’m not sure it is a cigar that I would seek out myself again, largely due to the size, but the flavor is one that I can recommend trying.

The INCH Short Run’s size is still one that gives me pause; being 5 inches but still having a sizable 62 ring gauge might be something others are used to see, but it isn’t in my humidor. Still, the cigar looks nice, with a pleasantly soft, oily feel to the medium brown wrapper. The aroma has changed significantly from before, completely missing the citrus note and instead only producing sweet cocoa, chocolate cookies and some light leather notes. The cold draw is much the same though, with cocoa, graham crackers and a mild spice creating an enticing profile.

Starting into the first third, not much seems to be different, but certainly smoother notes of wood, earth and spices. Instead of growing as before, the rich spice note is there right from the beginning, being complemented by the oaky wood, earthy leather and damp hay. The second third does see the addition of a toasty breaded note, though the name of the game is still spice and oak, with the leather and hay joining the toast in the background. While the profile has been fairly similar so far, thankfully missing is the bitterness that showed up in the second third. With the bitterness completely missing, the final third continues to shine with the same profile of spices, oak, leather, hay and toast, staying smooth and enjoyable all the way to the end. 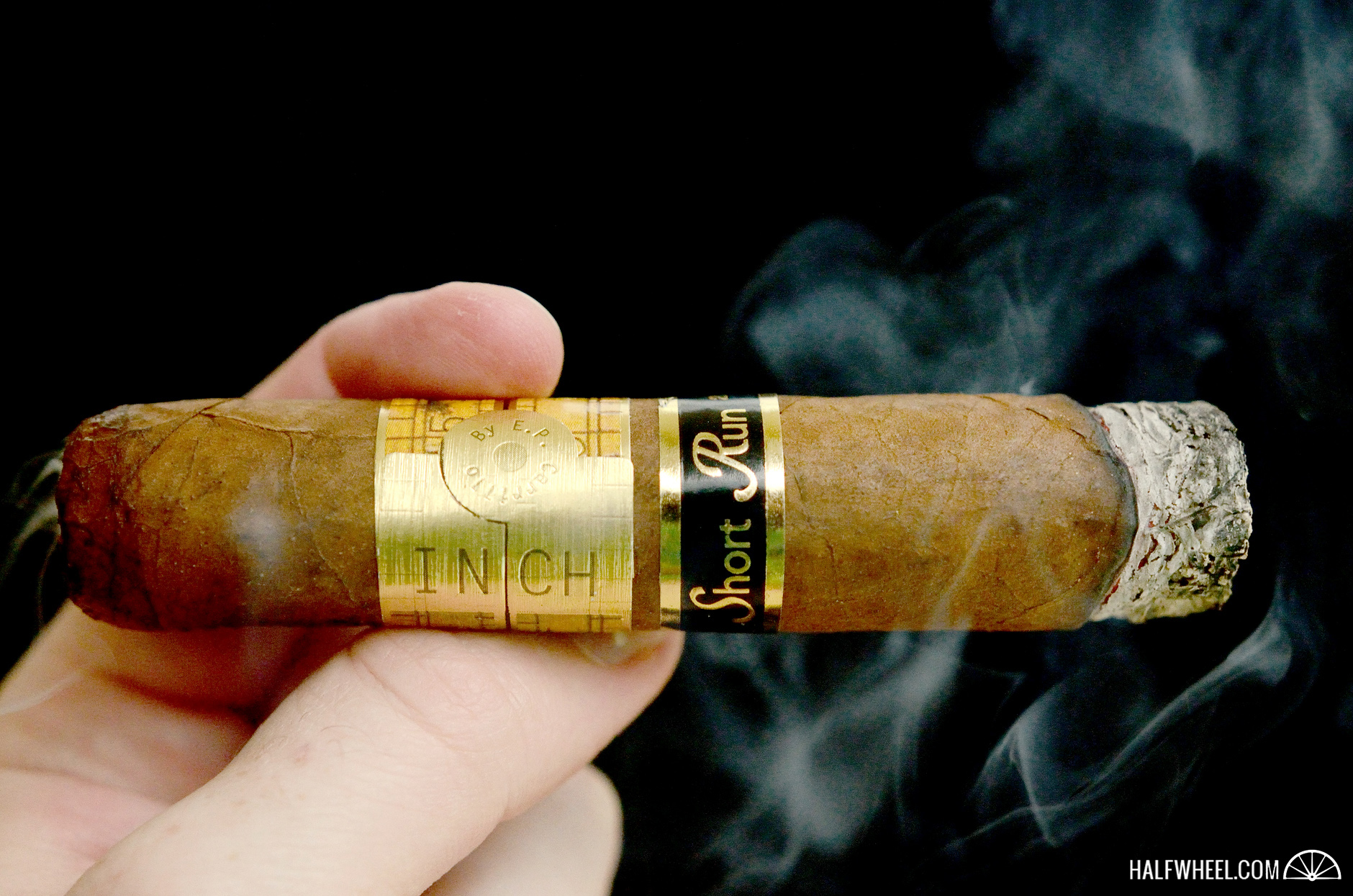 Starting into the first third, the burn line is a little wavy, but that could potentially be due to the larger ring gauge and lighting it with just a single flame torch. Even with just cutting off the minimum amount of cap to open the cigar up, the draw was still quite loose – just barely squeaking into the acceptable range. About an inch into the INCH, a touch up was necessary since an entire section had started to fall behind. Despite the open draw, the smoke production is still quite good. Along those same lines, the ash was much more dense than I had thought, holding on to around the inch and a half mark before falling off. With one more touch up at the very beginning of the second third, the burn has finally seemed to start acting correct, keeping on with a sharp, completely even burn line that was impressive to say the least. The final third has continued with just as sharp a burn line as the second, creating a completely different experience from the original samples I smoked two years ago.

Two years has done the INCH Short Run No.62 a lot of good. While the first third still had some minor burn issues that needed correcting and the draw was still a bit more on the loose side than I would prefer, the final two thirds of the cigar performed spectacularly, which I think kept the bitterness and harsh notes from showing up as they did originally. I’m sure time to rest and mellow out helped the profile stay away from those notes as well, but thankfully didn’t mellow out the rich earthy, woodsy and spice filled profile that was originally there. If you have any of these sitting around that didn’t originally get smoked, now would certainly be a great time to revisit them.