As the song goes, everything old is new again, and such is the case with a new release from E.P. Carrillo.

The new line is named Elencos, which some long-time fans of the brand might find a bit familiar. A cigar with the same name—Elencos—was released in 2011 in three different sizes. Interestingly, that blend was identical to E.P. Carrillo’s Edición Limitada 2010, a 6 x 54 double robusto composed of a Brazilian habano wrapper that was limited to 10,000 cigars. 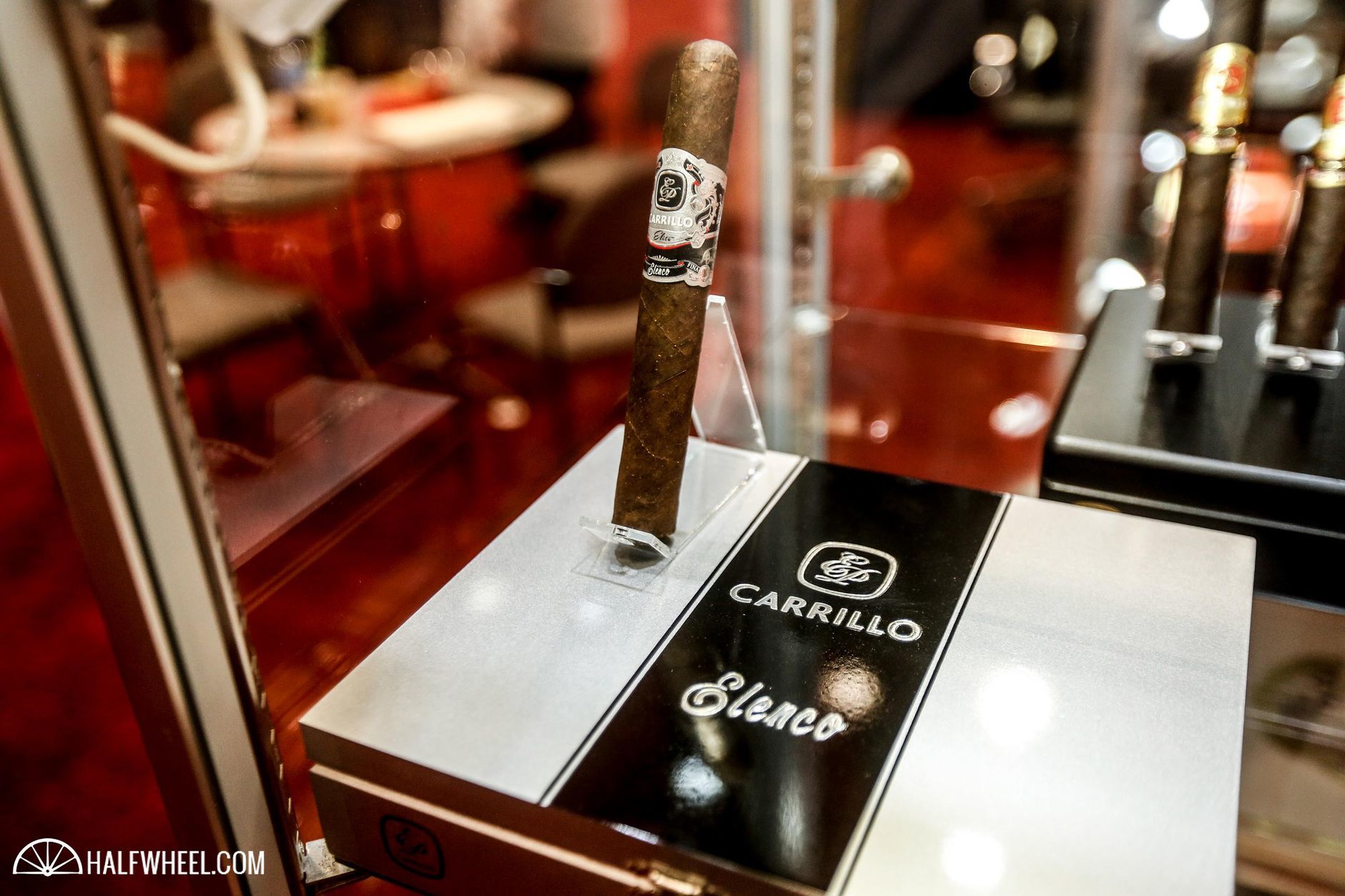 Not much was heard about the brand until the 2017 IPCPR Convention & Trade Show, when E.P. Carrillo showed off a cigar with the same name in the same three vitolas. However, this new release featured a different blend, specifically a Brazilian wrapper covering a binder from Ecuador and filler tobaccos from Nicaragua. Packaged in boxes of 20, the new regular production line is being rolled at Ernesto Perez-Carrillo Jr.’s La Alianza factory in the Dominican Republic and started shipping to retailers in November 2017.

There are three vitolas in the new Elencos line. 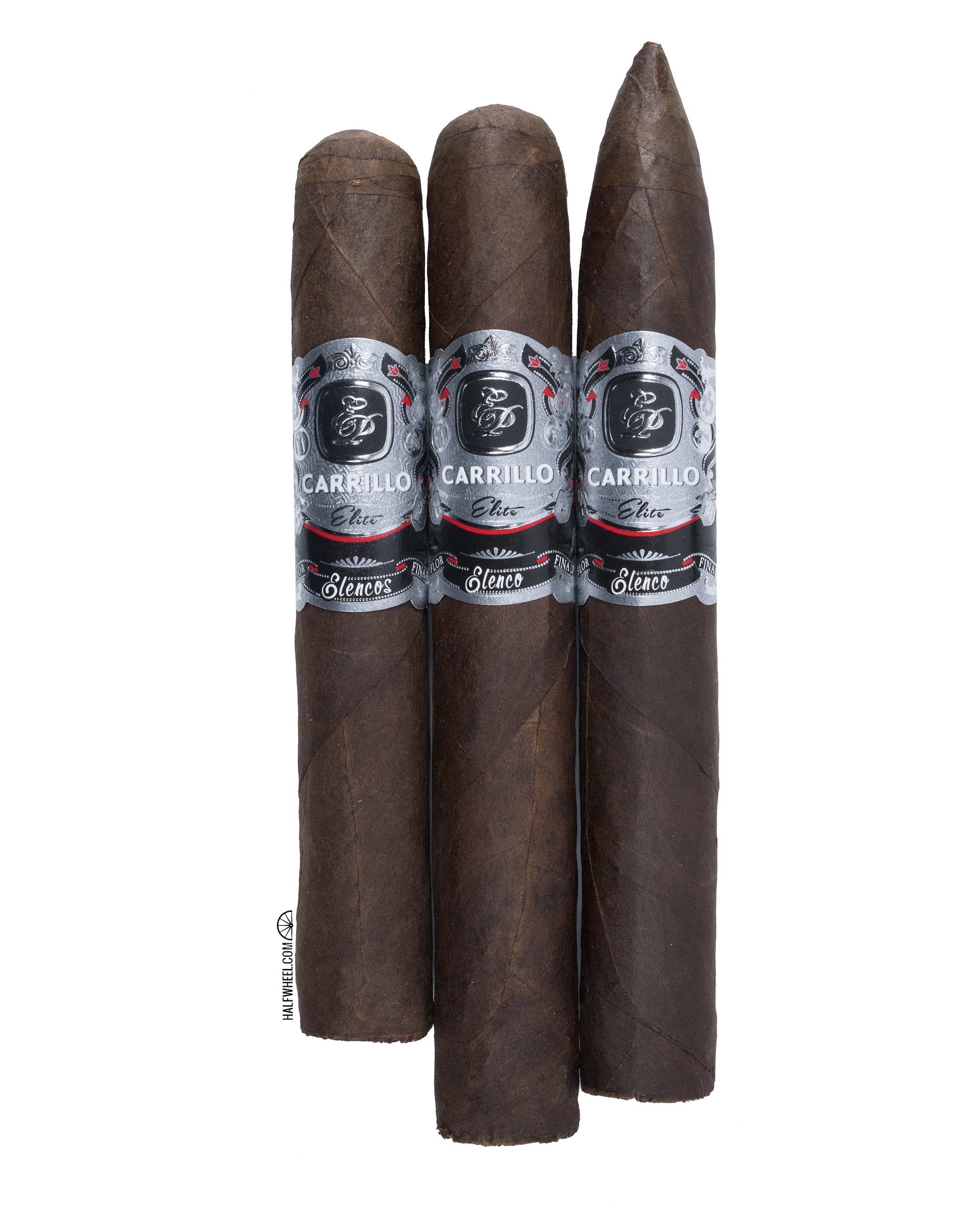 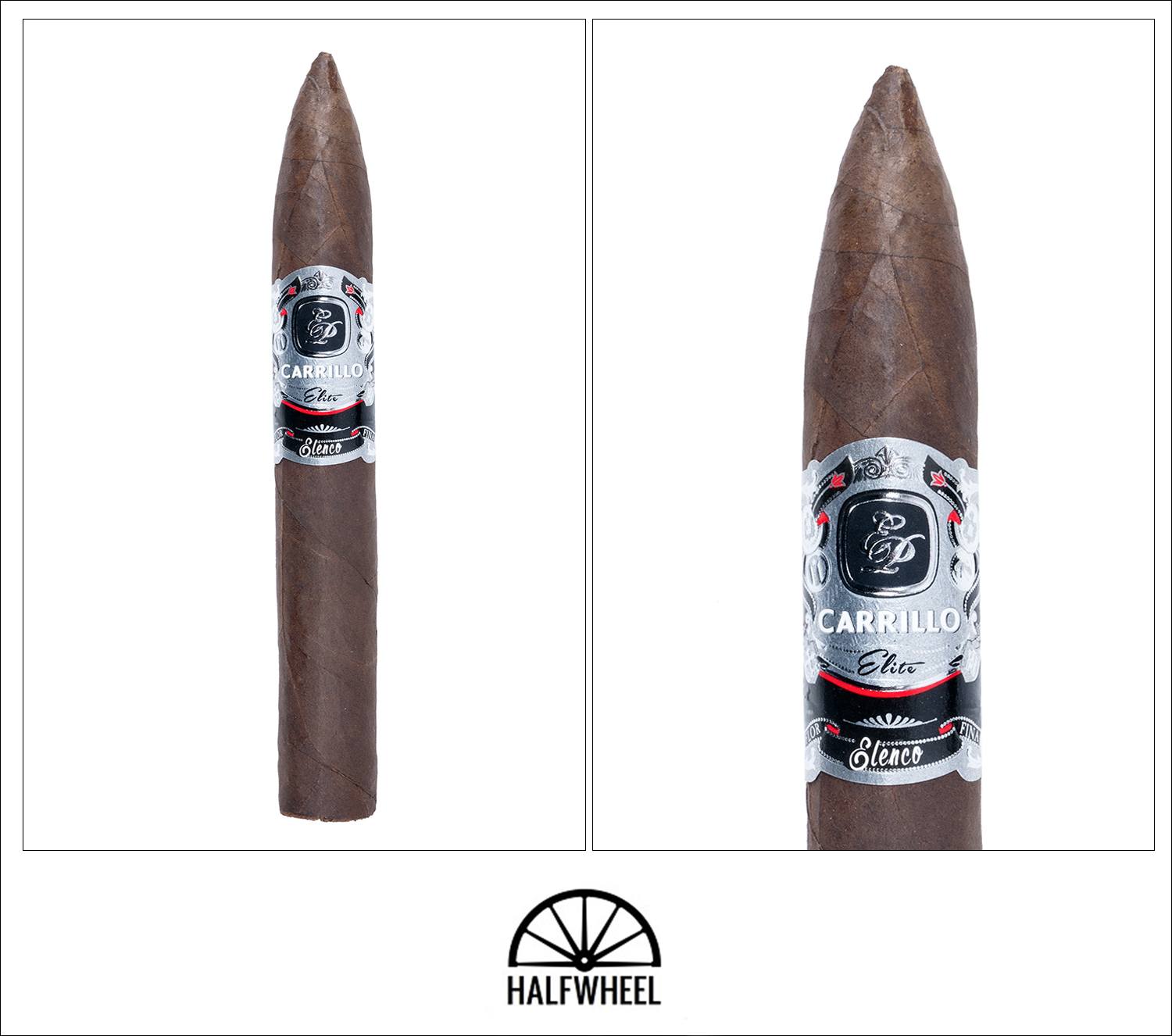 Covered in a dark espresso brown wrapper, the E.P. Carrillo Elencos Acto Mayor is extremely rough to the touch and seems to be almost dipped in oil. The cigar is quite firm when squeezed and there are a number of very prominent veins running up and down its length. Aroma from the wrapper and foot is a combination of oak, leather, earth, nuts, black pepper and a syrupy sweetness, while the cold draw brings flavors of earth, leather, hay, cocoa nibs and raisins.

The first third starts out quickly with a blast of maple sweetness on the palate that recedes quickly, allowing a dominant sweet bourbon and oak combination to come to the forefront, followed by lesser flavors of peanuts, freshly roasted coffee beans, earth, leather, cocoa powder and plums. In addition, there is a very distinct floral sweetness on the retrohale, along with quite a bit of black pepper and some slight spice on my tongue. The draw is excellent from the first puff with just the right amount of resistance, the burn is wonderful so far, and the smoke production is extremely copious coming off of the foot. Strength-wise, the E.P. Carrillo is a bit light to start, but does increase to a point between mild and medium by the time the first third comes to an end. 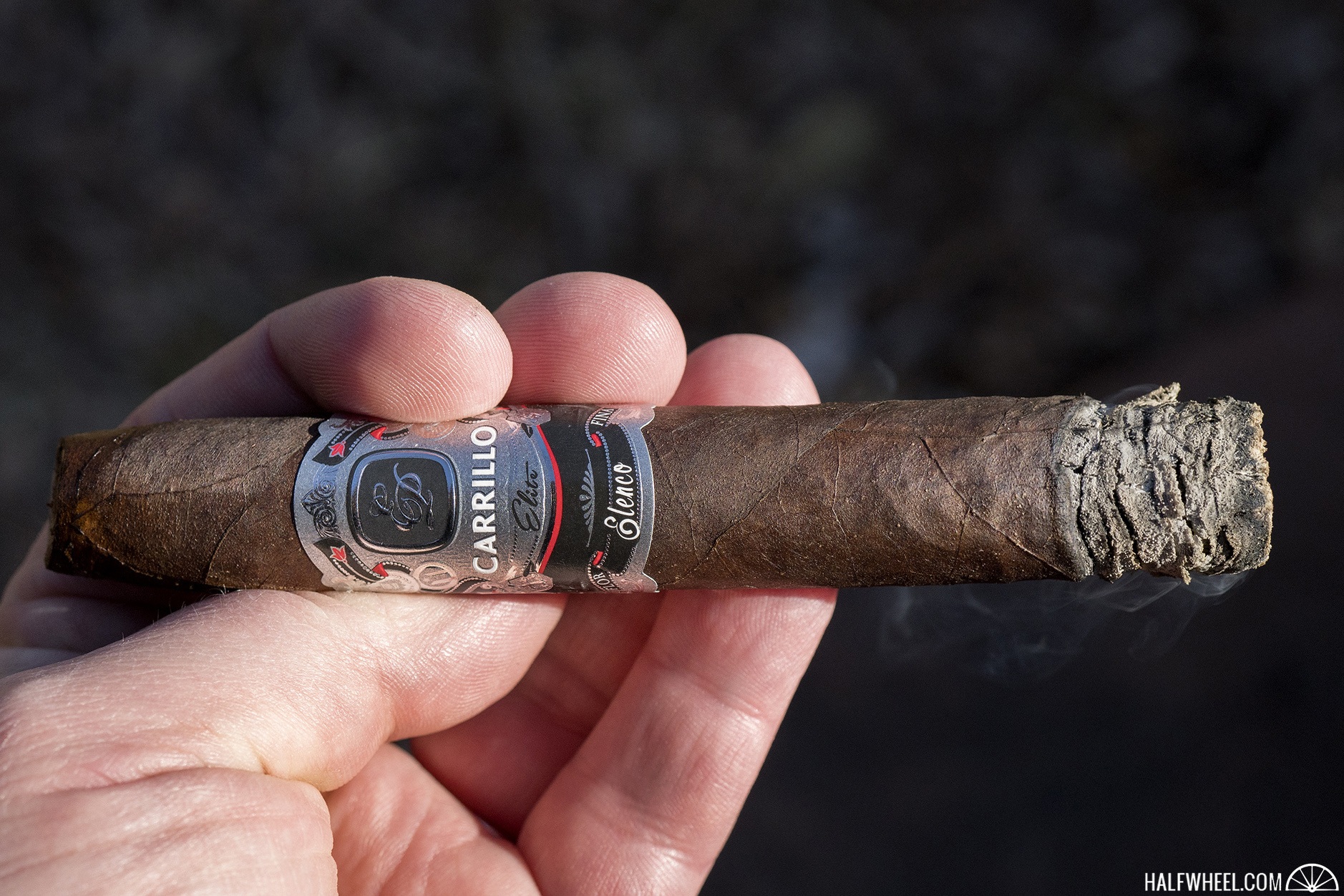 Coming into the second third of the E.P. Carrillo Elencos, the profile is becoming noticeably creamier while the sweetness on the retrohale has morphed into a distinct dark berry note. The dominant flavors have shifted as well, and now include earth, peanuts, baker’s chocolate, dried tea leaves, cinnamon, hay and slight citrus. The amount of red pepper on the retrohale increases dramatically compared to the first third, although the berry sweetness and overt creaminess of the profile overall is more than enough to mollify it. The draw remains stellar and the burn continues to impress, while the strength has increased noticeably, ending the second third still in the medium range. Once again, the sweetness changes in the final third of the Elencos Acto Mayor, reminding me strongly of raisins, while the dominant flavors continue on the same path as the second third, namely earth and peanuts. The profile is still quite creamy while other flavors of sunflower seeds, cinnamon, dark chocolate, coffee beans, leather and hay flit in and out. In addition, there is still a bit of spice on my tongue while the red pepper on the retrohale has reduced a bit from its high in the second third. Overall construction continues to impress, with an excellent draw and just short of razor sharp burn, while the strength hits a point just north of the medium mark by the time I put the nub down with less than an inch to go. 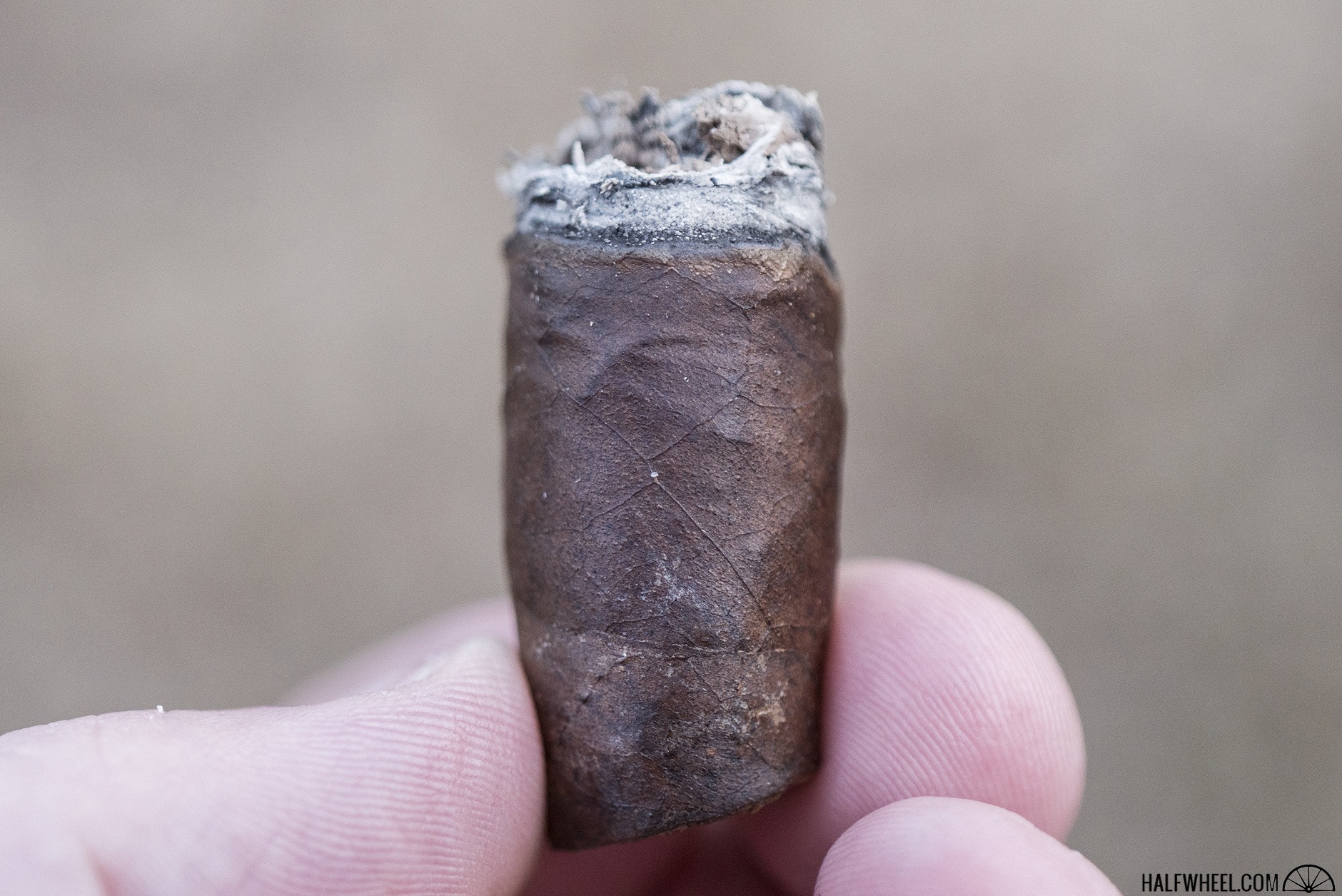 Any number of descriptors ran through my head as I was smoking these cigars: Bold. Complex. Chewy. Rich. Intense. Make no mistake, there is plenty of red pepper on the finish—and to a lesser extent, on the retrohale—but it is molified nicely by the ever-changing sweetness and creaminess that is present in the profile. In addition, the construction was extremely good across the three samples while the smoke production was off the charts. I have had issues with some of the more recent releases from E.P. Carrillo but in the end, there is only one thing that needs to be said about the newest version of the Elencos line: it is a winner.