The name E.P. Carrillo should be a familiar one for most cigar smokers and for good reason; Ernesto Perez-Carrillo, Jr. has been in the cigar business for close to 40-years between El Credito, General Cigar Co. and his eponymous company which produces cigars under its own E.P. Carrillo brand and for Crowned Heads.

Which seems to make the E.P. Carrillo 5 Year Anniversary in need of a small bit of explanation as to its name. While Perez-Carrillo has been in the cigar business since the late 1970s, it was in 2009 when he launched EPC Cigar Co. along with his children, Lissette and Ernesto III. That year the company released the E.P. Carrillo Edición Inaugural 2009, a limited edition that was followed by the well-regarded regular production Core Line. Since that time the company’s portfolio has steadily grown to include the annual Short Run project and yearly limited editions, as well as regular production lines including the Core Line Maduro, Cardinal, Cardinal Maduro, E-Stunner, New Wave Connecticut, INCH, INCH Maduro, the recently launched INCH C-99 and soon to be released La Historia.

This is the sixth non-Short Run, nationally-released limited edition for the company. 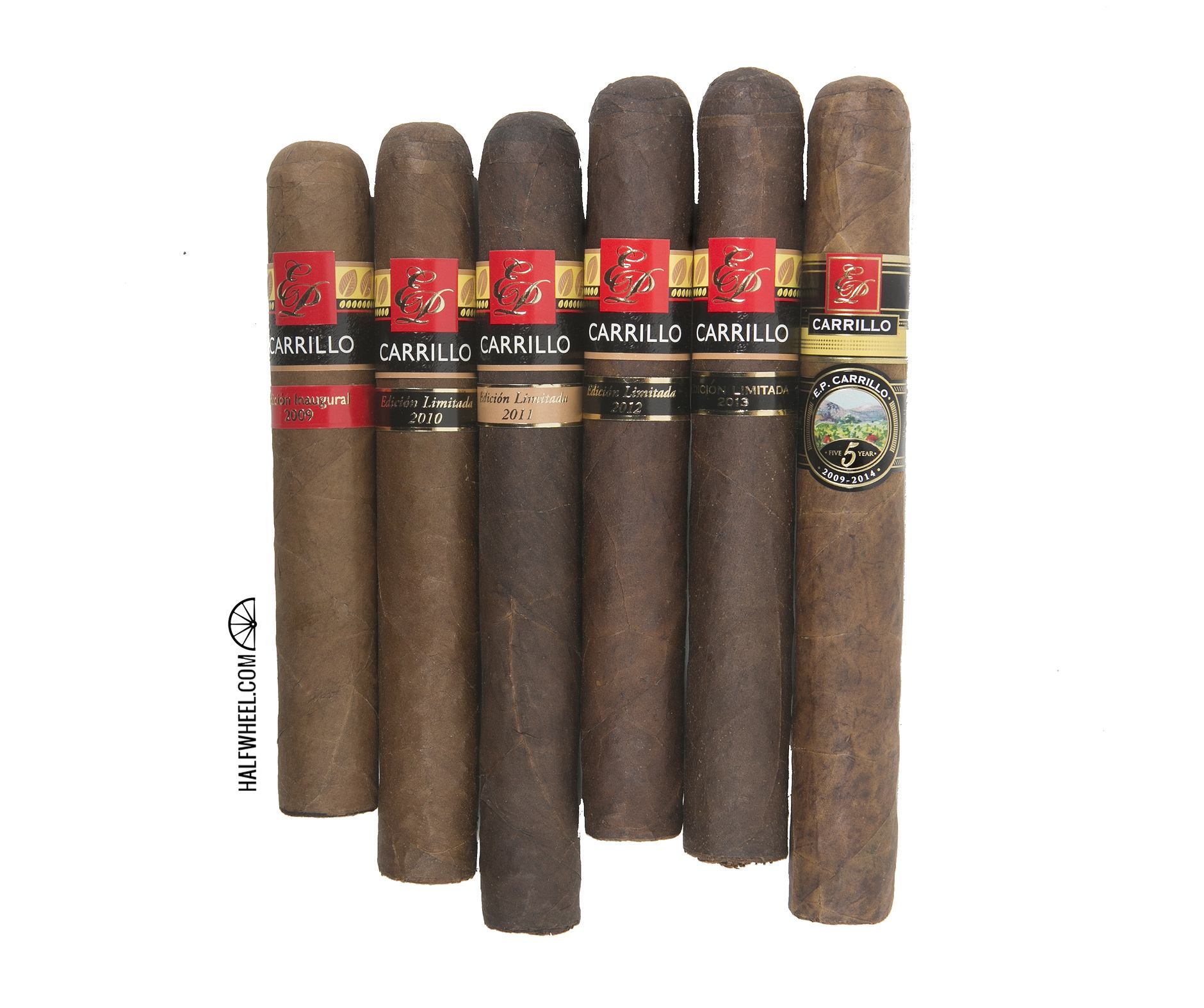 For this release, Perez-Carrillo went with a format similar to his annual limited editions, a single vitola that comes in a ten-count box. Though he did veer from the norm a bit by giving the cigar a unique band that hasn’t been used before, as well as a unique secondary band that differs from the style seen on other limited editions released by the company. I love the texture of the E.P. Carrillo 5th Anniversary’s wrapper, as it’s not just smooth but it’s almost polished, as it offers a tactile sensation you just don’t find on many cigars. Color wise, it’s fairly mottled and feels like looking at a bunch of coffee beans of various roasts in the same bin, one of the aspects of Ecuadorian Sumatra that I tend to find most appealing. If you like seeing the subtle variance of color that can occur in one leaf, this is one of the better examples. The bands on the cigar are familiar yet a bit different; the new primary band is a variation on the one that graces the company’s regular production cigars, and one that Ernesto Perez-Carrillo Jr. said could be used on other special projects in the future. The secondary band reminds me of one I saw in Havana on some cigars that had been designated for an event at the Partagas factory, though the scenery depicted is certainly different. Firmness is a bit of a concern, as it feels softer in the foot’s half than the head’s, and at points is downright soft. The pre-light aroma has a bit of Mexican hot chocolate, not peppery but spicy, while also offering a warm chocolate goodness. There’s a touch of damp wood to the aroma as well, a familiar smell for someone who grew up in rainy Seattle—or any damp place with lots of wood buildings—that offers a bit of musk to the aroma as well. The cold draw has a similar note but it skews more towards wood, slightly damp and not as intense as tree bark; more like firewood that has been stacked outside and has been in a light rainfall or two. Air movement is fairly loose on one cigar and a bit more dialed in on the second, though both skew too open for my preferences.

There’s a fair amount of pepper in the rich smoke of the first few puffs and the nose seems to get the bulk of it though don’t think the palate gets left out. It’s an aggressive start for the cigar, going right after the taste buds with enough fervor to light up even a worked palate. If you smoke one on a palate, be prepared for quite the greeting, likely by having an easy drinking beverage nearby. While not quite as aggressive of a start, early retrohales mean business with good amounts of pepper that are buffered just enough by the smoke to take off some of their edge. As the flavor unfolds, the palate gets notes of robust coffee, some earth and wood, and slightly dialed back but still more than adequate notes of pepper. I’m a little disappointed by how quickly the first clump of ash breaks off—just shy of the one-inch mark. The burn line also starts to get a bit wavy early, but there doesn’t seem to be much in the way of combustion issues. The retrohales early in the cigar are fairly peppery and pack a good amount of punch, and they get steadily stronger with each attempt, lighting up the nostrils as soon as a retrohale is even thought about before the cigar is out of its first third. There is a slight decline in the strength of the flavor as it gets toward the second third, backing down into the medium-full category. While the first third held its strength levels fairly consistent, the second third starts with a bit of an increase, with a decent serving of raw black pepper being added to the mix that sits on the back of the tongue and into the throat to add some gruffness to the cigar. It’s still very palatable, but keep in mind that the first half of this cigar is one that will challenge many palates. The burn line has straightened itself out well by the midway point, with plenty of smoke continuing to be produced with each puff. The air flow has also tightened up just a bit and is now much more in line with what I would expect from a cigar such as this, while the ash does a much more respectable job holding on, even resisting a few gentle shakes. A retrohale at the halfway mark still shows a good bit of white pepper sharpness, but it is a much finer sensation in the nose, having dialed down to a smooth yet still sharp edge but much more enjoyable on the whole. The flavor strength continues to ebb and flow with regularity, with the pepper the biggest variable both in the nose and on the tongue, with notes of strong coffee creating the bulk of the base. Strength continues to take a step forward at the start of the final third, and a good hour and a half with the E.P. Carrillo 5 Year Anniversary certainly feels like it is taking its toll on both the palate and increasingly in the chest thanks to a decent amount of nicotine. There is a part of me that is craving something sweet to balance out the strength, and if nothing less thinking about the trick I’ve heard of putting a spoonful of sugar under the tongue to mitigate some of the effects. There are points when pulling out individual notes becomes a challenge, though I can’t shake that strong coffee note with a bit of char that comes back in when the pepper retreats. A slight change in the texture of the smoke with about an inch left brings about a creaminess with the slightest bit of an oily texture, something I can’t say I picked up prior. The cigar finishes nearly as strong as it started, and depending on where you catch the wave of strength and decide to put the cigar down, quite possibly even stronger. To say I was shocked by the raw strength of the E.P. Carrillo 5 Year Anniversary would be an absolute understatement, and this coming from someone who can only recall one other experience in the past year or so where a cigar hit me so profoundly hard. I'm hoping this is simply a matter of the cigar's relative youth and by the time it hits retailers and has had an additional chance to settle and come together, strength will be one of many descriptors, not the sole one. There seem to be some good flavors just waiting to be tasted and aromas waiting to be smelled, but with the overbearing strength I found in the cigar, it was hard to get to them. Try it, but be forewarned that you may be in for more of a ride than cigars from Perez-Carrillo generally offer. I'll be interested to see how this cigar tastes once it hits store shelves and again in several months.