The lancero is an interesting vitola; flat-out shunned by some yet coveted by others, it has become a rarity in the release of the majority of new cigars. If the size does get added to a line, it seems more as a token to appease some fans, rather than stemming from a belief that the vitola has the merits to stand on its own.

Such is the case with one of the latest releases from Duran Cigars, who responded to a mix of colleagues, retailers and consumers that wanted to see the company’s Neya F8 blend in a lancero format. The result: the Texas Tactical Lancero. 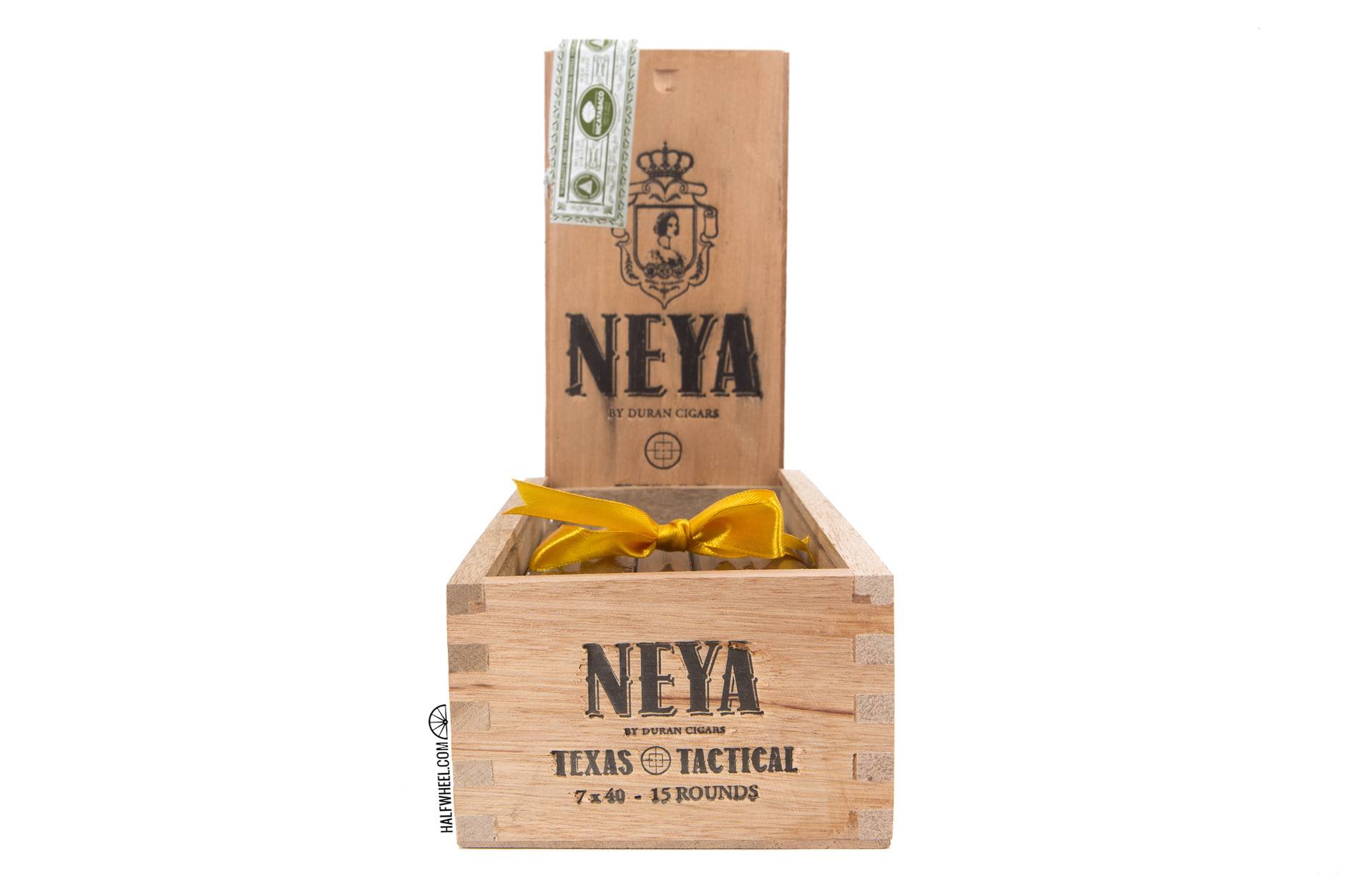 Announced in mid-July ahead of the 2016 IPCP Convention & Trade Show, the cigar takes the line’s blend of an Ecuadorian corojo maduro wrapper grown at Duran’s Fincas Azan farm with Nicaraguan tobaccos underneath and highlighted by ligero from Estelí that gives the cigar its strength, and rolls it into a 7 x 40 vitola with a small pigtail cap. The Neya Texas Tactical Lancero is comes dual banded and with a short, tight pigtail of a cap, providing plenty to look at in case the reddish-brown wrapper isn’t enough. The capa is slightly mottled in its coloration and doesn’t show much in the way of veins, as they are small and easily blend into the leaf’s appearance, while the fingers pick up a slight bit of texture that ranges from fine grit to near velvet. The first and third samples I smoked was incredibly firm, with just a bit of give from the outer layer quickly revealing a stiff core, while the second offered slightly more give but not enough to change my thoughts on how this was rolled. The foot’s aromas are mild and slightly meaty, somewhere along the lines of pepperoni and nondescript cured salami, though there can be a bit of floral or fruit sweetness pulled out as well. The cold draw shows no issues moving air while the profile is a bit smokier, manifesting as roasted almonds and a bit more of the sausage note, though juicier than it was via the nose.

The Neya Texas Tactical Lancero opens up with a rich and flavorful treat for the palate, complex with notes of pork, earth and a damp wood note that fluctuates between cedar and bark. While pepper deserves inclusion on that list, it is so much more prominent in the nose via retrohales that it seems best to reserve its inclusion to that portion of the experience. It’s a bright expression that gets supported by light fruit, and while the intensity is much greater, immediately summons mind  the thought of a glass of Gewütrazminer. Chalk enters the profile after the first clump of ash departs, while black pepper follows closely behind as the flavor gets a bit drier. Retrohales continue to be lively and peppery, while there is a lingering tingle in the nose and on the palate. The first third of the lancero burns quite well, with more smoke production that I generally expect from a cigar of this shape save for the third sample, which is rather stingy with it. The strength of the Neya takes a step forward at the start of the second third, as the pepper is a bit fuller and there’s more earthiness to the overall flavor, something that manifests by the smoke coming across as thicker on the tongue than it did earlier. Trace amounts of red apple sweetness are sporadic but enjoyable and give the smoke a touch more complexity, something that is establishing itself as one of the cigar’s high points. Near the midpoint, the smoke regains some of its lushness from the first third and dryness becomes a bit of an afterthought, which has my palate thankful as persistent dryness of the mouth is not something I enjoy. There are more pivots in the flavor through the second third, though it can be hard to pin them down to exact words, Roasted nuts, pork, sausage and salami all come to mind at times, each with decent helpings of pepper that get more aggressive in the nose as the final third gets closer, with a very subtle orange liqueur sweetness beginning to creep in as well. One sample develops a palate-shocking dry flavor that is waxy and hard to place, other than to say it is not a logical progression of the cigar. A chocolate undertone begins to emerge at the start of the final third of the first cigar as the Neya Texas Tactical Lancero continues to perform near flawlessly with plenty of smoke, a much better experience than what’s found in the second cigar, which continues on with a dry and sour taste that makes me think of bad Christmas candy, something like a mint gone horribly wrong. A bit of it creeps in to the third sample but is a fleeting appearance, saving the cigar from taking the same wrong turn that the previous one did. The final two inches develop some combustion issues as the cigar seems to have retained a bit too much moisture, something that gets picked up via the flavor as well. When burning, however, the cigar takes another sizable step in its flavor and aroma progression, with strawberry and cranberry sweetness marking the otherwise smoky and campfire aroma, while hints of earth and dark chocolate. The number that sits to the left represents a few things, namely how good the cigar can be when it draws properly and offers some impressive complexity, as well as how off-putting one sample in particular became and the overly tight draw of another. It's not as good of a number as the first cigar deserved, which is a shame, but serves to note the consistency issues the the cigar had. If I could confidently say that you'd get the experience that the first cigar offered, it would be an easy recommendation; instead I offer guarded optimism that it's worth a try with a caveat that you might not get as ideal an experience as the company intended.