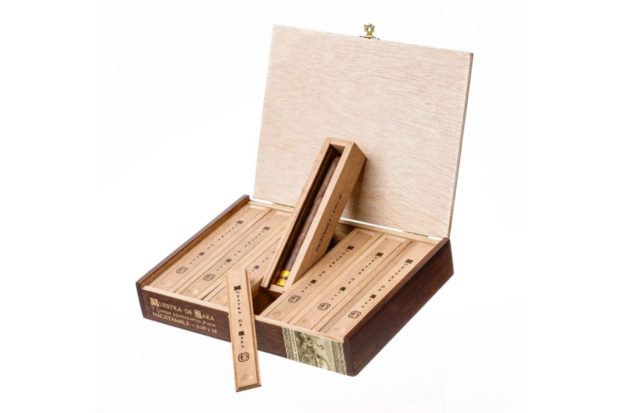 The second Muestra de Saka release has been announced.

Dunbarton Tobacco & Trust says it is taking pre-orders for the Muestra de Saka Nacatamale up until July 14, 2017, which happens to be the final day of the 2017 IPCPR Convention & Trade Show.

The Nacatamale is a 6 x 48 parejo with filler coming from a single farm in Jalapa, Nicaragua. It uses an Ecuadorian habano wrapper and a Nicaraguan binder.

“What made this cigar a unique blending challenge was I went ‘viejo granja’ style with it,” said Steve Saka, founder of Dunbarton Tobacco & Trust, in a press release.

“For over a century most cigars’ entire filler recipes were comprised of just one farm’s tobacco and any complexity was introduced by extremely careful leaf processing, selection and positioning within the bunch. Whereas these days as we have hundreds of ingredients to work and blend with to create interesting and satisfying ligas. So, the challenge was to see if I could make an ‘old farm’ style liga that could hold its own with the modern blends created today.”

Saka said he is not disclosing the name of the farm in Jalapa.

Pricing is set at $15.95 per cigar or $111.65 per box of seven. Saka has previously indicated that while Muestra de Saka releases are limited, the line is not intended to be one and done.

Muestra de Saka is a line of limited cigars across a variety of blends and sizes. Saka says the cigars “reflect the blending machinations of myself.” The first release, Muestra de Saka Exclusivo saw its widespread release in March.

The company says it expects to ship the Muestra de Saka Nacatamale in late October.