The odds are that you have never heard of this cigar produced by Drew Estate, and the story behind it is one of the main reasons I decided to spend the time to review it…

In 2009, the (then) owner of Tobacco World in Atlanta, Georgia, Robert Wachtel, went on one of Drew Estate’s Cigar Safairis in Nicaragua…For those of you that don’t know, the Cigar Safari is a 3 day trip that takes you on a tour of the Drew Estate plantation in Esteli, Nicaragua. As part of the trip, everyone who attends (retailer or consumer) gets to participate in the “Blend Your Own” experience in which you get to select the tobaccos of your choice from the 30+ different varieties they are currently using on the floor to create your own cigar blend. Drew Estate then has their best torcedors (i.e Cigar Rollers), the same people that make the Liga Privadas, roll 10 cigars each in the vitola of your choice.

While on one of the Cigar Safaris, Wachtel became so enamored with the blend he came up with, he asked the guys a Drew Estate to produce a limited number of boxes of the specific cigar for his store. DE agreed, and the “Double Signature Reserve” was born.

Steve Saka, President of Drew Estate, had this to say about the blend:

It does utilize a center priming of our exclusive Stalk-Cut CT Habana capa (i.e. Wrapper), but is entirely different from any of the current Liga Privada cigars – the tripa (i.e. Filler) is a combination of a DR Piloto Cubano Seco, a Brazilian Mata Fina Viso and a pair of 2 different Jalapa-grown Criollo Habana leaves secured in a San Andreas Negra capote (i.e. Binder). 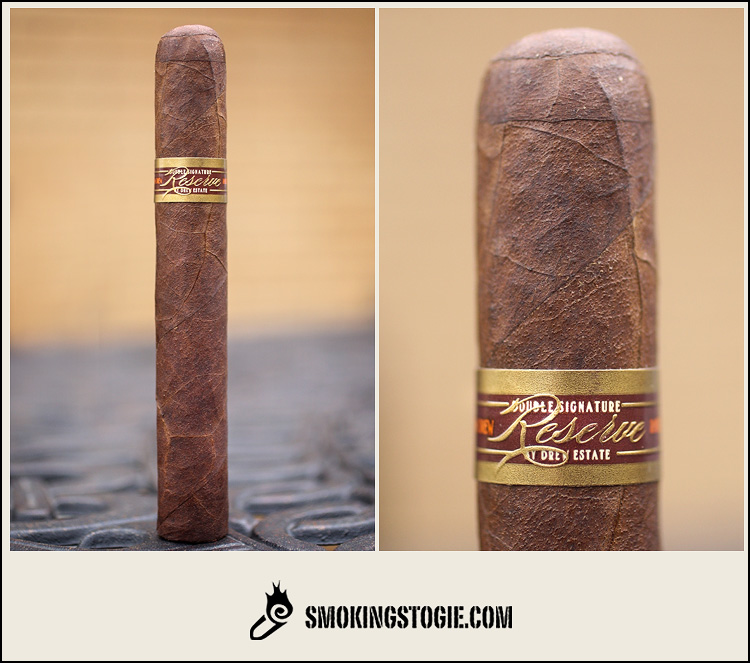 The cigar itself is an impressive looking stick, with a very dark, toothy reddish brown wrapper that has some oil…The wrapper has an extremely familiar feel and look to it (I do smoke a few Liga Privadas, so it seems familiar to me :) and has that very distinctive “LP Smell”, i.e. spicy woodish intertwined with sweet cloves…(I dare say I could tell a LP cigar just by smell alone, in fact, I may try that at the next local herf)… It is neither hard nor soft when squeezed, but that perfect in-between that is so hard to accomplish when rolling a cigar…

The cigar lights up easily, and First Third starts VERY spicy up front, a profile that continues for 15 puffs or so, then starts to die down…The dominant flavors are easy to pick out: oak and leather with just a touch of bitter espresso thrown in for good measure…

The profile takes a sudden shift in the Second Third, with almost no spice or pepper at all (even on the retrohale)…The flavors turn more floral and slightly sweet, although there is a bit of harshness that creeps in as well, and I would be lying if I said those two together made a very interesting combination…There are still woodish notes, but they are mostly relegated to the background… The Final Third had much of the same characteristics as the Second Third…Floral and slightly sweet, with little to no spice or pepper…The harshness became more prominent towards the very end (and I did nub all of the samples, and they were all the same in that regard), but never totally overwhelming…Not the best ending to the cigar… The Bottom Line: Honestly, while I enjoyed the cigar, I did not like the blend nearly as much as the #9 or the T-52…It seemed like it had some similarities (most likely due to the T-52 wrapper), but to me the blend seemed…unfinished? or perhaps unrefined, like someone was in the middle of blending, got tired of doing it, and said “Well, that is good enough”…If I ever needed proof that the blending of a great tasting cigar is as much an art as it is a science, this is it. There is a reason that Saka and JD (and others) take the time and effort to get a blend of a cigar JUST RIGHT…This blend is good, but misses the mark of greatness…

Leave a comment (any comment) to enter our contest to win 1 of the last remaining Drew Estate “Double Signature Reserve” on the Planet!

(and yes, it is already packed up and ready to go!)